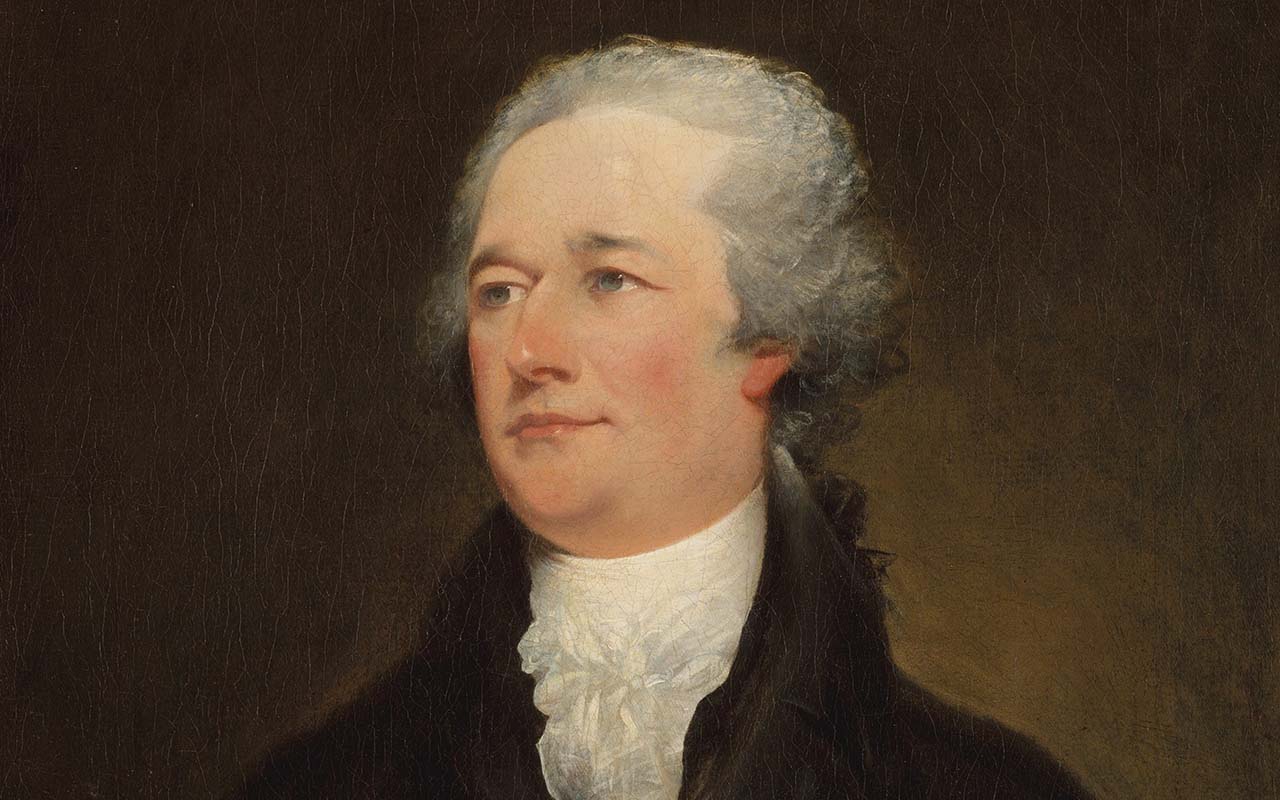 The Divine Command from the Book of Genesis:

28.—And God blessed them, and God said unto them, “Be fruitful, and multiply, and replenish the earth, and subdue it: and have dominion over the fish of the sea, and over the fowl of the air, and over every living thing that moveth upon the earth.”

Let us begin with Alexander Hamilton.

In those writings Hamilton defines a Constitutional economic system based on several key principles:

The ideas which created the American Republic do not come down to us from John Locke or other oligarchical spokesmen of the British Empire. If you wish to understand the truth about America, study instead the sermons of John Robinson of the Plymouth Church; or the writings of Cotton Mather; or Benjamin Franklin’s lifelong pursuit of scientific investigation. It is all there, plain as the nose on your face:  Man is a rational, creative being. He can make discoveries. He can advance his condition. He can love his fellow men and women. He can willfully create a better future for his posterity. He can create a Republic which will embody those principles and defend them.

Constitutionally, and unlike any other nation before or since, the American Republic is We the People. The elected government of the Republic is empowered, as a sacred trust, to undertake actions, within constitutional restraints, to facilitate the inalienable right to Happiness of the people. What Hamilton accomplished, what he invented, was a constitutional Sovereign Credit System, one which is based entirely on the principle of sovereignty and human advancement. That is American Economics.

In the Constitution of Liberty, Friedrich Hayek characterizes his imperial outlook in this way: “The nature of the Liberal System: the belief that its characteristic attitude is INACTION of the state.”  Let us not let this lying euphemism pass. By “inaction” what Hayek demands is a SURRENDER of sovereignty to a global financial oligarchy. That is the British outlook. In America, our Constitution demands that the Republic must act to “Promote the General Welfare and secure the Blessings of Liberty to ourselves and our Posterity.”  The axiomatic moral opposition of these two outlooks could not be clearer.

The advancement of the human condition to higher levels is linked directly with the intention to increase human productivity. Unfortunately, in today’s financialized economy, the term “productivity” has been corrupted beyond all recognition. As early as the 1950s Lyndon LaRouche pointed to the invasion of the “bean counters,” who sought to maximize monetary profit through various “cost cutting” measures, as indicative of a suicidal trend in American business. In 2021 this has reached psychedelic proportions, with mega-corporations shifting from production to financial speculation and reporting huge gains in “productivity.”

Return to the quote from Genesis given at the front of this article: “God created man in his own image,” and “God said unto them, ‘Be fruitful, and multiply, and replenish the earth, and subdue it: and have dominion over. . . every living thing that moveth upon the earth’.”

Real human productivity is located in actions that willfully increase mankind’s Power Over Nature. This is accomplished, as Abraham Lincoln would insist, through individual “Discoveries and Inventions,” discoveries which unlock new powers and new potentials to accelerate human advancement.

Lyndon LaRouche invented two means through which to measure this rate of increase in actual human productivity. The first is a term he called Potential Relative Population Density and the second he defined as a measurement of Energy Flux Density. This brief article is not the place to explore those concepts in depth. Fortunately, a series of recent classes on these subjects, by Bruce Director, Ben Deniston, Brian Lantz, and others, is accessible on the LaRouche PAC website.

LaRouche would often refer back to the works of Gottfried Leibniz, and in regard to economic policy, Leibniz’s discussion of the impact of the invention of “heat-powered machines.”  That invention, that human discovery, revolutionized human society and massively increased the productive power of our species

This is what LaRouche describes as Physical Economy, —as opposed to ALL the money-based dictums of the British school—an approach to economics which is based in the continual increase in mankind’s productive power, achieved through new discoveries and leaps in development. That is the only legitimate definition of Human Productivity, —as LaRouche, Leibniz and Hamilton would all agree—and such willful breakthroughs in human productivity are what makes possible humanity’s reaching out to discover more about the universe, and to bring that universe increasingly under human dominion.

The Liberty to Create

Consider certain individuals from American history:  Cyrus McCormick, George Westinghouse, Thomas Edison, the Wright Brothers and Henry Ford. Countless others could be named. Through their courage and will, they made discoveries which changed history, which revolutionized the productive power of the nation, which changed the lives of future generations. They had the Liberty to do that, the Freedom to act on the future.

BUT they didn’t do it in a vacuum! The 1861-1865 Lincoln Revolution, including critical changes in banking, currency, tariff, and infrastructure policies unleashed a tidal wave of pent-up human potential. In the decades following 1865, thousands of new patents were filed with the federal government. Under Lincoln’s Greenback and National Banking policies, financing was plentiful to apply these new discoveries to every aspect of manufacturing and agriculture. The government of the Republic promoted these developments in every way that it could.

Look at the situation today. A recent article by Mike Carr on the LaRouche PAC website focuses on the work now being pursued by companies like Helion Energy, Commonwealth Fusion Systems, Rocket Lab, SpinLaunch, the Orbital Assembly Corporation and others, related to both fusion energy research and space exploration.  These are small and medium sized companies who are working relentlessly to make new discoveries, some of which could profoundly affect our future. The proper role of our Constitutional government is to encourage and to support such initiatives. Yet, these and other projects are held back by a financial system which cares only for speculative monetary profit, and by an indifferent, if not hostile, government. This is a denial of actual human Liberty.

In Lyndon LaRouche’s 2014 Four New Laws to Save the U.S.A. Now! one of his Laws calls for “a return to a system of top-down, and thoroughly defined National Banking.”  LaRouche is emphatic that it is only through a National Banking System, that sovereign credit can be created and mobilized for the development of the nation.

The problem in discussing this today is the pervasive illiteracy in the field of economics, such that the term “national banking”—much like “capitalism,” “free enterprise” and “entrepreneur”—have lost their meaning. Take, for example, the claim by both populists and bankers that Hamilton’s Bank of the United States was a “Central Bank” because it included private shareholders and private directors.

But in 1946 Clement Atlee’s Labor government nationalized the Bank of England, buying out all the shareholders, an arrangement which continues to exist to this day, with the Exchequer holding all of the Bank of England’s stock. Does this make the Bank of England a “national bank”? —and Hamilton’s Bank of the United States a private “central bank”? Such nominalism is absurd and leads nowhere.

Another misconception is to confuse a National Bank with an Infrastructure Bank. Depending on the as-yet unwritten charter of a new National Bank, it is possible the Bank might be empowered to offer loans directly for infrastructure development, although a parallel or partnered institution dedicated solely for that purpose is probably a better idea. However urgent the infrastructure requirements of the nation might be, the National Bank has a far more paramount responsibility.

To grasp this point, rather than thinking about a National Bank as a single institution, per se, think of a national banking system, for therein lies the key. Our current banking system consists of hundreds (and what once were thousands) of privately-owned banks. That is a good thing. We don’t want a nationalized banking system any more than we want a nationalized education system. As in the case of Westinghouse and Edison, individual initiatives and interventions from these private banks are essential to the development of a creative productive economy. The question, which both Hamilton and Lincoln understood, is how to integrate the private banks into a mission which serves the interests of the People.

Unfortunately, during the last 30 to 40 years, American banking institutions have lost that mission and been seduced almost entirely into the speculative casino economy. For the good of the Republic, this must be reversed, and thankfully, that reversal can be accomplished quite easily, beginning with the re-imposition of the Glass-Steagall Act and additional measures to divorce the banks from the practices of financial speculation.

The next step is to bring these private banks into a national credit system for the purpose of building up the productive power of the nation. The best model to follow, at least in principle if not detail, would be to do what Lincoln did with the National Banking Acts and the Legal Tender Act between 1861 and 1865. The banks were regulated in such a way as to prohibit the worst usurious and destructive practices. Then they were compelled to make loans to the government and receive in return the new Greenbacks, which became the basis for their operating capital. The U.S. Treasury produced a generous supply—a conveyer belt—of federal credit into the banks, which flowed from the banks to farms, factories, shipyards, and a multitude of useful enterprises. A vibrant credit system for the development of the nation was established. The productive economy boomed.

As the American economist Henry Carey stated in 1865, “The ‘greenback’ has fallen on the country as the dew falls, bringing with it good to all and doing injury to none.”

The American system of Hamilton, Lincoln and LaRouche is not, as Hayek might slander it, “statism, creeping toward totalitarianism.”  America is a sovereign Constitutional Republic, based on the principles to be found in the Declaration of Independence and the Preamble of the United States Constitution. The Republic is, as Lincoln insisted, committed to the “right to advance materially, intellectually, morally” for all of her citizens.