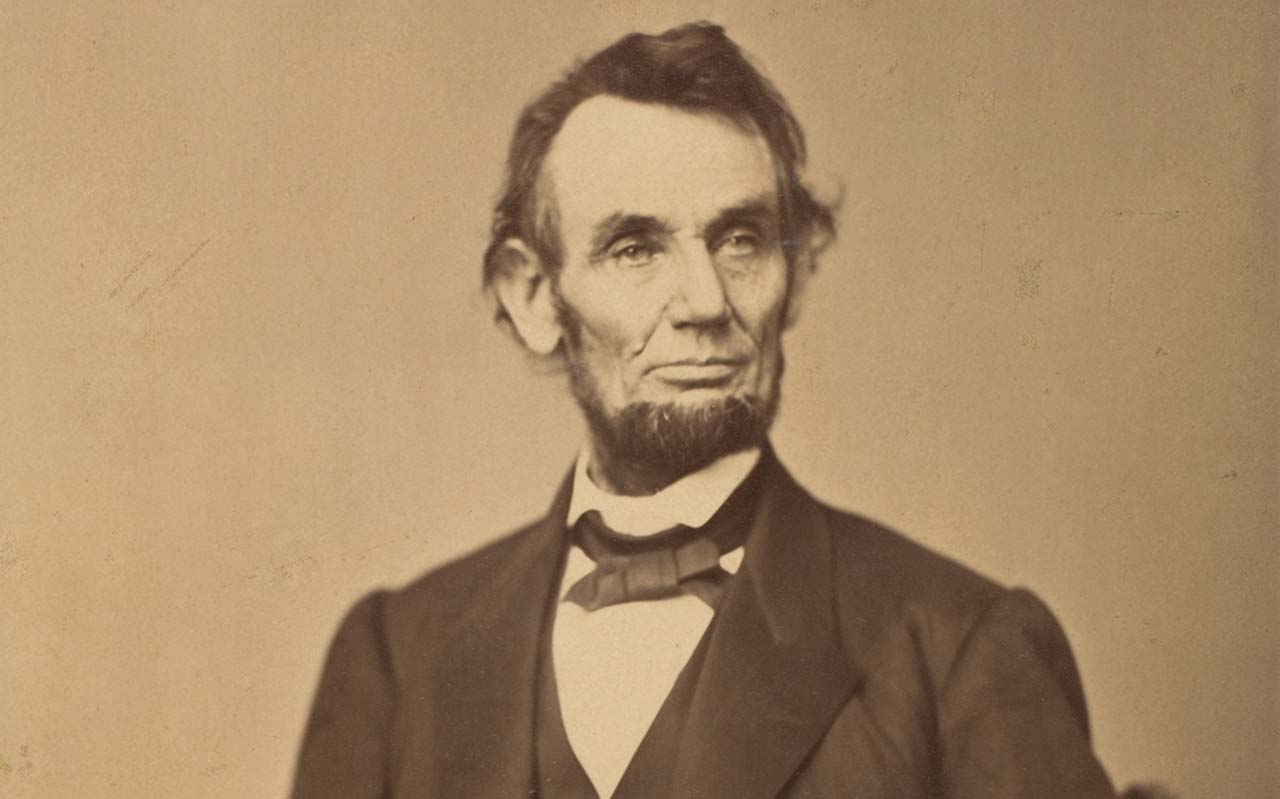 “On the side of the Union, it is a struggle for maintaining in the world, that form, and substance of government, whose leading object is, to elevate the condition of men—to lift artificial weights from all shoulders—to clear the path of laudable pursuit for all—to afford all, an unfettered start, and a fair chance, in the race of life.”

“The legitimate object of government, is to do for a community of people, whatever they need to have done, but can not do, at all, or can not, so well do, for themselves. . .”

The Challenge Before Us

If we look at the empty plots of land where our manufacturing once thrived;  if we look at the poverty and anarchy in our cities; if we look at the material and spiritual devastation throughout the “opioid belt;”  if we look at the lack of opportunities and inspiration for our upcoming generation of young adults;—if we take in the full sweep of all of this;  the nation cries out:  “Help us;  Heal our wounds;  Provide for us a Future!”

But there is no answer coming from Washington, DC, and no future if we continue on our current path. Just destruction, poverty, and cultural decay.

What is to be done? Biden’s Green New Deal and “stimulus packages” are a recipe for disaster and will plunge us deeper into economic and monetary collapse. On the other hand, the Mont Pelerin Society free marketers proclaim that the best thing is to do nothing. “Get the government off the backs of the American people” is their mantra. They insist that any attempt to build our way out of this mess will be inflationary, will make our currency worthless. They say: “Just let the marketplace work its magic.”

An economy made up of Starbuck’s baristas, Uber drivers, DoorDash deliverymen and gambling casino croupiers is an economy with no future; but those are the “career” pathways now offered to the younger generation. Such employment pays little, contributes nothing productive, and leads nowhere. Family formation becomes an impossibility.

As a nation, we seem to have forgotten how to THINK BIG. And we have LOST the knowledge of how great economic progress was accomplished in the past. We can recover what we have lost, but that will require a revolution in economic thinking. We must build our way out of this mess. Build, build, build! Hillsdale College’s proposed economy is nothing but a nation-wide “flea-market,” with low prices and ultra-low wages. They will never build anything, and behind their academic façade lurks the same elite billionaire interests who fought against every effort by Donald Trump to re-industrialize the U.S. economy.

We should turn our eyes back to the actions of our greatest President. Abraham Lincoln’s first campaign speech in 1832 announced his loyalty to the American System of economics. During his (1834-1842) tenure in the Illinois legislature, Lincoln led the fight for creating what was called the “Illinois System.”  That project included two major rail systems, as well as a canal from Lake Michigan to the Illinois River, a project Lincoln likened to the Erie Canal. Most of the funding came from the Illinois State Bank, which Lincoln helped to create. The Illinois System was, by far, the most ambitious economic development initiative in the nation at that time.

Later, as President, Lincoln signed the Pacific Railway Act on July 1, 1862, authorizing huge government land grants to finance the construction of the Transcontinental Railroad, America’s “Apollo Project” of the 19th century. Lincoln battled tenaciously for the passage of the bill, and then took personal direction over the railroad’s construction.

On July 2, 1862, Lincoln signed into law the Land Grant College Act, designed to modernize, and upgrade U.S. agriculture. At government expense, scientists supplied farmers with the latest intelligence on fertilizers, soil chemistry, and crop management. Diseases of livestock were conquered and eliminated. The growth of railroads connected the farms to the urban centers. New, sophisticated farm machinery was invented, and its use increased yields and lessened manual labor.

In 1861 Lincoln signed into law the Morrill Tariff, which by 1865 raised protective tariffs to 47 percent, from their pre-war level of 18 percent. New industries were created by the thousands.

And none of this, —let me repeat, NONE OF THIS—was done with the British laissez-faire economic methods that Hayek and Hillsdale love so dearly. This was American economics, —willfully building the nation.

LaRouche Knew the Solution 40 years Ago

Today’s Hayekians spin the same old lie: “You can’t finance an economic recovery because if you print more money, it will unleash inflation.” You hear the same refrain every day, like an old long-playing record which skips back and just keeps repeating the same groove. But Lincoln did it, and it can be done again.

There are two highly recommended works by Lyndon LaRouche which should be injected into the current debate on economic policy, as well as diligently studied by all those who now propose to stand as candidates for public office: 1) the book-length Why Credit Can Be Greatly Expanded Without Adding to Inflation (1980)  and 2) the article Why most Nobel Prize economists are quacks (1995).  Rather than attempting to summarize LaRouche’s argument, here are two short selections from the first of those two works:

“The secret of overcoming a depression under this sort of circumstance is essentially the following. Instead of proceeding from the misassumption that monetary orders are the essential reality of economies, and that production and consumption must therefore submit to the conditions demanded by an existing monetary order, reverse one’s approach. Design a monetary system whose mechanisms are enslaved to the requirements of profitable economic growth, as measured in terms of the input-output relations of the productive process as such.

“We cannot propose to do quite exactly that, in point of fact. We could, in principle, nullify all existing financial debts and assets, and construct a new financial order from the base of the requirements of the economic (non-monetary) foundations. However, resort to such drastic action means collapsing existing banking and many other institutions.

“A middle road must be discovered and chosen. Without undermining the integrity of existing financial structures, we must steer the operations of those institutions into new directions. . .

“The classic policy discussion relevant to the proposal just outlined is the extended discussion of the reorganization of the United States’ debt submitted to the Congress of the first George Washington administration by Treasury Secretary Alexander Hamilton. The reasons for the debtor’s fully honoring the old debts, in establishing an entirely new U.S. banking and monetary order, are those which would be acceptable to every sensible banker in the world today, and should be equally acceptable, both on moral and practical grounds, to the overwhelming majority of the nation’s citizens” . . .

And from Chapter 4 of the same work:

“The usual, automatic response to the announcement that this reporter proposes to issue new U.S. Treasury currency notes as the means for credit expansion is a sharp outburst of horror! The auditor exclaims, ‘But, that’s inflationary’!

“The new notes are not to be issued against federal government operating deficits, but on capital account. The new currency notes are to be put into circulation through national banking channels, such as participation in loans issued for hard-commodity production and productive-capital loans through the local private bankers of ultimate borrowers.

“Therefore, the amount of fiat credit put into circulation through such channels is regulated by the following principal considerations. It is limited by loan demand on account of tangible production’s capacity, technological improvement, and operating capital requirements, and by the demand for such uses of credit among creditworthy borrowers. Each increment of new fiat credit issued through such channels supplements private banking capital also participating in the loan. Therefore, fiat credit is not put into circulation except against a matching increase in newly produced, tangible wealth providing security for this credit issuance. These are the immediate built-in regulators of the amount of such credit issued:  the securing of the credit issued by the tangible wealth created through its use by creditworthy entrepreneurs which is the twofold, crucial consideration.

“Therefore, such forms of circulation of increased fiat credit could not be inflationary. Directly the contrary, insofar as it occurs in a climate of promotion of scientific and technological progress, such increase of credit energizes correlated rises in national productivity and is therefore deflationary.”

“Of course, nothing good is accomplished unless such added margins of credit are, in net effect, steered into the act of realization of capital improvements in productive potential. It is possible to generate much larger amounts of fiat credit, and yet, because that fiat credit is improperly invested or otherwise spent as current income, a counter-productive, inflationary result is produced.

“The most efficient policy for solving both problems is to curtail all generation of fiat credit except through issues of currency notes on capital account by a national banking system, or similar discipline maintained for a centralized private banking system.

“Governmental fiat credit should be issued, except under conditions of national emergencies such as wars, only in the form of currency notes loaned on capital account, either to economic ventures of governments (wealth-creating state investments), or through private banks as participation credit for medium-to-long-term loan capital for hard-commodity production investment and production operating capital or export credit. . .

“Therefore, credit expansion is not in itself inflationary, and, furthermore, properly directed flows of government fiat credit in the form of currency notes circulated on capital account carries the relatively least risk of being diverted into channels of usage which are inflationary.”

Our Constitutional Republic has a vast array of economic weapons in its arsenal with which to launch an in-depth economic recovery. This can be done, provided the guidelines defined by LaRouche are followed. These actions include, but are not restricted to:

The only thing that is preventing such an Economic Renaissance today is a lack of vision and courage, the will to act. We must learn to think big once again.

With this, I conclude this series on Hillsdale College and the British-Austrian “school” of economics. My closing advice is this:  If you are approached by any Hillsdale/Hayek acolytes who offer to teach you about “American history and economics,”—Run for your life and start reading Alexander Hamilton, and Lyndon LaRouche!

Find all 7 posts combined in a 30 page pamphlet here.