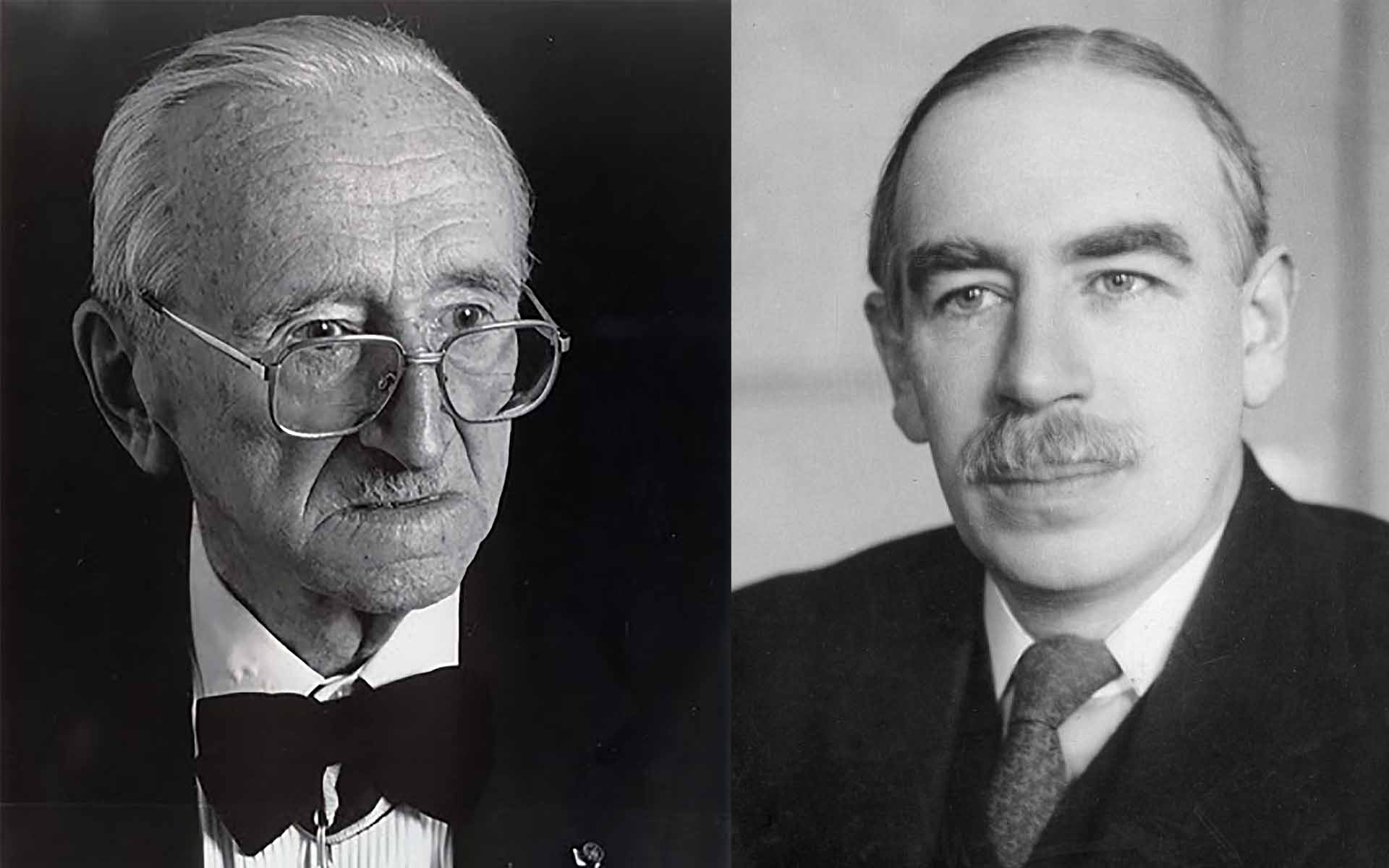 Part 4 — Hayek and Keynes: Two Peas in a Pod

“Come One. Come All. It’s the ‘Thrilla in Manilla’. It’s the great Ali vs. Frazier rivalry. Get your tickets today!”

This is how the imaginary rivalry between Friedrich Hayek and John Maynard Keynes has been popularized,—sort of as a Battle of the Titans, only now in the economic arena. But unlike the real Ali and Frazier, who bloodied each other unmercifully, this is a delusory myth designed for the credulous. The only blood that will be spilt will come from the victims of British imperial economics.

Within the construct of this manufactured contest, we are told that there are only two alternatives for economic and financial policy:  Big Government or Free Market.  The fairy-tale narrative goes like this:  Keynes’ “big government” views ruled the roost from the Great Depression into the 1970s, then to be knocked off its perch by the free-market ideas of Hayek, who held sway until the financial crises of 2007-2008, when Hayek’s followers were TKO’d by the resurgent influence of Keynes.

Will Keynes continue to reign as champ?  Or will the scrappy Austrian make yet another comeback?  Stay tuned.  Cast your bets now!

If you believe any of this, there is a bridge in Brooklyn you might want to buy.

In the 1920s and 30s, John Maynard Keynes, later to be anointed “1st Baron, Lord Keynes,” held sway at Cambridge University, while Friedrich Hayek toiled away across town, issuing his pleas for a return to 19th century British “liberalism,” from the London School of Economics.  From these two locations, according to the narrative, sprang the Great Economic Debate which would define all economic policy for the remainder of the 20th century.

But this is fantasy, a deliberately-created mental trap, one in which it is demanded that you submit to the contrived parameters of the debate.  In reality, all that differs between these two British subjects is their choice of methodology.  Cosmetically, Keynes and Hayek may appear different, with personal choices of rouge and mascara, but butt naked and unadorned they are identical—Lombard Street tarts.  Their fealty to the British financial empire is a fiercely held and shared commitment.

In reading both Hayek and Keynes, one comes away with the impression that the American Revolution never happened, that Alexander Hamilton was never born, and that Abraham Lincoln did not launch the greatest economic revolution in human history.  None of this is ever mentioned by either of the “rivals,”—because their shared goal is to destroy the American economic tradition.  The delinquent American children must be brought back into the embrace of the Mother Country.

Whether it’s Hayek’s Constitution of Liberty or Keynes’ General Theory of Employment, Interest and Money, what wafts off the pages are the faint strains of “Rule Britannia,” like the last wail of a dying empire.

When Hayek’s Road to Serfdom was published, he sent a copy to Keynes.  Months later, Keynes, then visiting America, wrote to Hayek:  “The voyage has given me the chance to read your book properly.  In my opinion it is a grand book. We all have the greatest reason to be grateful to you for saying so well what needs so much to be said. You will not expect me to accept quite all the economic dicta in it. But morally and philosophically I find myself in agreement with virtually the whole of it; and not only in agreement with it, but in a deeply moved agreement.”

For his part, after Keynes death, Hayek wrote to his widow, Lydia, describing Keynes as “the one really great man I ever knew, and for whom I had unbounded admiration. The world will be a very much poorer place without him.”  This was not simply a polite expression of commiseration.  In reading over Hayek’s correspondence and pronouncements, it is very clear that he suffered from a life-long inferiority complex, vis-à-vis Keynes, who after all had been elevated to the peerage by the monarchy, an honor that Hayek could only dream of.

These are not the words of enemies, or even antagonists.  Theirs was simply a polite “difference of opinion” about how to achieve the identical goal.  As Keynes had written, they were in complete agreement “morally and philosophically.” By the early 20th century, febrile seizures were beginning to rack the City of London, and its oligarchical cultural axioms were crumbling.  Keynes and Hayek merely offered two possible pathways to preserve oligarchical rule.  And those pathways are not mutually exclusive, as witnessed in the 1980s super-stardom of their joint “love child” Milton Friedman.

This same commitment to the axioms of the British Empire still today dominates the Hillsdale College curriculum.  On Nov. 14, 2021 College President Larry Arnn proudly announced a new class series offered by the College:—“Winston Churchill and Statesmanship.”  In promoting the class, Arnn states that Churchill was “the greatest statesman of the 20th century—even one of the greatest in all of history.”  Anglophilia permeates all things Hillsdale.

“Money Makes the World Go ‘Round”

Lyndon LaRouche often stated, “Money is an idiot!”  LaRouche’s views on money and credit cohere perfectly with Abraham Lincoln, who in his 1858 lecture, “Discoveries and Inventions,” is explicit that the sole source of all actual human wealth—all human happiness—lies in the power of the human mind to make new discoveries, i.e., to create revolutionary breakthroughs which transform human productivity and enhance human progress.

British monetarism, on the other hand, deliberately mis-identifies human wealth with money, an error that Benjamin Franklin, Abraham Lincoln, Alexander Hamilton or John Quincy Adams would never have fallen into.

British monetarism—whether of the Keynes or Hayek variety—has its roots in John Locke’s 1691 work Some Considerations on the Consequences of the Lowering of Interest and the Raising of the Value of Money, where Locke defines money as a “special” kind of property, one imbued with almost magical powers, which “turns the wheels of trade.”  Money is de facto the self-evident source of all wealth.

The British Empire, as also the earlier Dutch and Venetian empires, were all based on this empiricist notion of money.  They were FINANCIAL empires,—PRIVATE financial empires, and this rule by a private financial elite defines the imperial system down to the present day world order of “globalization” and “The Great Reset.”  During the 19th and 20th centuries, the City of London established the system of Private Central Banking (and “Central Bank money”) and spread that system worldwide, for the sole purpose of enforcing upon sovereign nations a “money system” and rule by a private financial elite.

It should come as no surprise that both Keynes and Hayek accept the dictatorial private Central Banking System as untouchable; nor that they both base all of their economic models, equations and policies on defending the axiomatic money system of the ruling class.  For Keynes and Hayek both, it is all about money,—how to defend its value, how to manipulate it, and how to profit by it.  Human beings and the physical economy are of little concern.

Take, for example, Keynes’ 1913 book Indian Currency and Finance, which he wrote as an employee of the Exchequer.  At that time India had just undergone two major famines (both the direct result of British colonial policy), which had killed more than 10 million people.  Yet, in Keynes’ book, famine and starvation are never mentioned; science, living standards and education are never mentioned; Indian leaders demanding freedom from British oppression are never mentioned. Instead, his only topic is reform of the Indian currency and banking system, so as to integrate Indian finances more fully into the London-based global financial system, to make India a more functional—and subservient—member of the British monetary empire.

If anything, Hayek was even more indifferent than Keynes as to the fate of the natives in the colonies.

In 1921 Keynes published his first “major” work, A Treatise on Probability.  It was lavishly praised by Bertrand Russell, who called it “undoubtedly the most important work on probability that has appeared for a very long time,” and said that the “book as a whole is one which it is impossible to praise too highly.”

Now, in the field of “Probability Theory,” there are many different and competing varieties.  Ludwig von Mises’ brother, Richard Edler von Mises, for example, was a prolific writer in this field, although Ludwig claimed to disagree with him in many of his conclusions.  Nevertheless, Hayek and von Mises, as well as Keynes and his followers, all based their economic/financial theories on some version of Probability Theory, and the one thing they all have in common is the principle of UNCERTAINTY, i.e., that the future is UNKNOWABLE.  As discussed earlier, for Hayek human progress is all “accidental,” arising out of unintended consequences which result from the workings of the “free market.”

Think about how ludicrous that is.  LUDICROUS!  We KNOW that if we go back the Moon and on to Mars we will unleash breakthroughs in science and technologies which will transform the human condition, and we will make discoveries which will dramatically affect mankind’s future.  We KNOW that if we develop and deploy fusion energy, we will CREATE a resource which has the potential to uplift the conditions of life for every human being on the planet Earth.  This is all willful.  This is what Abraham Lincoln meant when he spoke of “Discoveries and Inventions.”

Yet this intentional creative Human Action is denied by Hayek and Keynes because their obsession is with money and the continued hegemony of the monied elite.

In 1934, through his powerful connections, Keynes wrangled a meeting with Franklin Roosevelt in the White House, where he bent FDR’s ear—and tried his patience—for more than an hour.  After he left, Roosevelt remarked to Labor Secretary Frances Perkins, “I saw your friend Keynes. He left a whole rigamarole of figures. He must be a mathematician rather than an economist.”

FDR’s sense of smell was working quite well for him that day.  Mathematical probability theory, as deployed into the field of economics, has its origins entirely in the writings of Galileo Galilei (Concerning an Investigation on Dice, 1630), Giralamo Cardano (Book on Games of Chance, 1633), and Abraham de Moivre (Doctrine of Chances, 1718), and the economic/financial methods of both Hayek and Keynes resemble nothing so much as John Law, utilizing mathematical formulas at the gambling tables of Venice’s Ridotto casino.  For the British twins, all economic processes are essentially unknowable.  It is all chance.  And it is all about money—not intentional human progress.

And it’s all designed—from Money, to the Central Banking System, to Free Trade, to the denial of National Sovereignty—to ruthlessly perpetuate the rule of the private British financial empire and to prevent the upward development of the people.