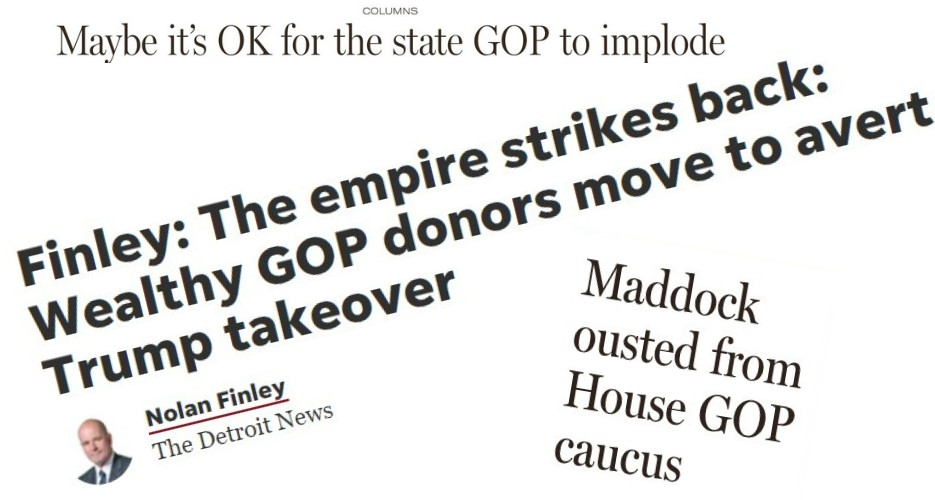 In the wake of the stunning grass-roots victory of Trump-endorsed candidates at the Michigan Republican Party endorsement convention on April 23, the former rulers of the party and their controllers are having a meltdown. From launching a “rich persons” campaign against Trump and Trump-backed candidates to expelling a leading State Representative from the Republican Legislative Caucus to hysterical editorials and newspaper coverage, the elites are demonstrating their own weakness and increasing irrelevance.

As previously reported, the patriotic and working-class mobilization, which led to the nomination of Trump-backed candidates Matt DePerno for Attorney General and Kristina Karamo, for Secretary of State, reflected a dramatic shift in the center of gravity in the hard-fought battle for the Michigan Republican Party. The grass roots mounted a successful campaign because they showed up and were ready to fight. And victory builds confidence.

And, apparently, defeat breeds stupidity. On Sunday, there was an effort by the Republican State Committee to decertify the election. It failed. On Tuesday, State Representative Matt Maddock, whose wife Meshawn Maddock is co-chair of the Michigan Republican Party, was expelled from the Michigan Legislative Caucus. Both Maddocks are unabashed Trump supporters. The excuse was the violation of caucus rules, but John Rocha, a state representative candidate, nailed it, “the Michigan House Republican caucus removed State Rep. Matt Maddock simply for the alleged crime of supporting America First, Constitutional Conservative, grassroots candidates to take back our state!”

By Wednesday, the millionaires/billionaires and the commentator class launched a new flight forward. The “uniparty” editor of the supposedly more conservative Detroit News penned an article headlined, “The empire strikes back: Wealthy GOP donors move to avert Trump takeover.” The empire? Well, give him credit for honesty, for a change. The article reveals that the “Michigan Opportunity Alliance,” a collection of about 50 of the states’ wealthiest Republican contributors (of which the DeVos family is most prominent) will direct their money away from the now Trump-dominated party, and to RINO and establishment incumbents whom they hope will recoup their control of the party. Then, with great fanfare, a DeVos-connected member of the Republican State Committee resigned, writing a letter which called Donald Trump a “deranged narcissist” and further intoned that support for Trump is “is a losing strategy and I cannot serve on the governing board of a party that’s too stupid to see that.”

The New York Times, Washington Post, and other bastions of the “commentator class” quickly picked on the resignation letter, declaring the Michigan Republican Party in disarray. News flash: it’s called a revolution.

These financiers and their lackeys are oblivious to the changing climate of the nation they live in. Record inflation, collapsing economic growth, and incompetence at home and abroad, have led to a growing mass strike that touches every layer of the American working class. Even inside the Beltway, the likes of McCarthy are quickly losing support.

This war is far from over, but the growing panic from within the MIGOP is entirely a good thing. As the "Establishment" tries to purge the grass roots, the opposite is happening, they are purging themselves, and making room for a big tent GOP that has been at the center of the Trump MAGA movement.

The New GOP is quickly becoming the party of the American Worker, and this means, that those who will NOT fight for the policies that support hard working Americans - policies that expand our economy, increase our production, and end the tyranny of the Federal Reserve’s hyperinflationary agenda - won't last long in this New GOP or any positions of leadership in American politics.

For the parasitical classes, what they call chaos and disarray simply threatens their power and their lifestyle. For those patriots of America and for mankind, this is a critical fight for our future. This is not the normal squabbling about single issues politics and factional infighting, this is a fight on principle and for principle, and our victory has the power to change the course of history.