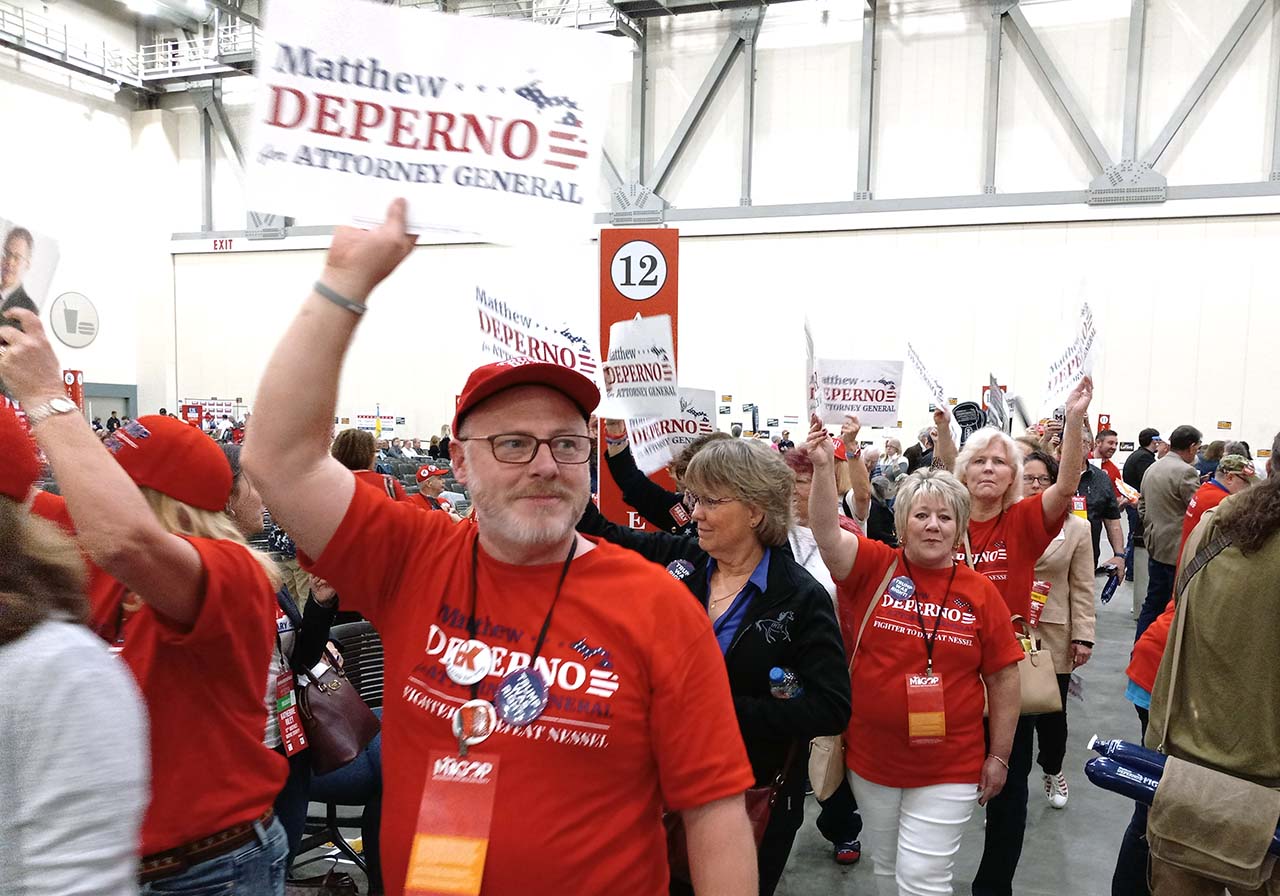 On Saturday, April 23, 2022, the Trump movement in Michigan out-organized the old-guard establishment, exercised its power, and succeeded in securing the general election ballot for Trump-backed candidates, Matthew DePerno and Kristina Karamo for Attorney General and Secretary of State, respectively. The official GOP endorsements took place at the longest Michigan Republican Party convention in history and marked a watershed in the transformation of the Republican Party into a new political force, representative of producers and patriots, and capable of defending the nation from its historic enemy. That enemy surely took note of Matt DePerno’s victory statement which identified the hand of George Soros behind his opponent, current Attorney General Dana Nessel.

The battle for the Michigan Republican Party has been underway for months and years, and Saturday’s victories are a lesson for all those who populate social media with endless iterations of how powerful the enemy is, or whispered stories about how Trump and the military are already in command. What the grass-roots movement of activists (which numbers in the tens of thousands throughout the state) showed is that if you SHOW UP and FIGHT for a profound principle--in this case, defense of the Republic, you can defeat an enemy whose seeming power lies in money and lies.

So it was in the 1850’s, when Abraham Lincoln almost single-handedly created a new movement recommitted to our founding principles, by drawing workers, farmers, industrialists, and minorities out of the traitorous Democratic Party and out of the shards of other failed parties, to win the nomination and the election of 1860 and to preserve the Union. Lincoln’s creation of the Greenbacks and the establishment of a national banking system dedicated to the constitutional principle of promoting the general welfare, revived the Hamiltonian policies of the first American Economic Revolution. In the footsteps of Lincoln’s second revolution, this weekend’s victory must open the door to abolishing the Federal Reserve and restoring a National Bank, as advocated in LaRouchePAC’s call for “A Third American Economic Revolution.”

A Republic in Action

Prior to the November 2021 midterm Republican election victory in Virginia, Donald Trump laid out the strategy for victory: overwhelm them with a huge turn-out and get your act together on defending the vote. It worked. Those same two components prevailed at the Republican endorsement convention in Grand Rapids.

Trump came to Michigan on April 2 to strongly endorse DePerno and Karamo and to energize the movement which has been growing and self-organizing since the days of 2016, when Michigan Trump supporters delivered Trump’s election victory, out of donated office space, with little or no help from the official Republican Party. The stolen election of 2020 and the enemies’ outrageous actions on January 6, 2021, propelled many thousands of citizens into self-activation, forming grass-roots groups engaged in all forms of political activity.

The April 23 convention, held in Grand Rapids, presented a challenge to the Trump base, because this first time “endorsement” convention would be largely attended by delegates who were elected in August 2020, before the new wave of “America First” delegates could be elected in August 2022.  Second, while the Michigan GOP leadership is characterized by a tug-of-war between the old-guard and Trump loyalists, the convention district chairmen and rules were largely set by the old guard.

Here's where SHOW UP and FIGHT comes in.

Matt DePerno called on Trump supporters to “storm” the April 11 Congressional District caucuses and get elevated to become delegates and alternates where there were vacancies. This proved to be critical when the Attorney General race went to a second vote. Despite the inundation of money, mailings, and texts that supported the RINO-candidate Tom Leonard (affectionately known as “Laundromat Leonard” for his facility in moving PAC money around); and despite the fact that the third candidate in the race threw his support to Leonard, the Trump delegates and alternates organized and stuck it out through the very long day, with many, many of the alternates getting a chance to vote in the second round (myself included). DePerno prevailed with 55 percent of the vote.

In addition, the security of the convention vote itself was assured by an incredible mobilization of many groups and individuals who have formed a powerful force for election integrity in the state, which demanded a hand-count audit of the vote. An audit committee was ultimately chosen from among delegate volunteers, who did not finish the second audit until 9 pm. As Phil O’Halloran, one of the leaders of the effort said, “the fact is, reliable and trusted elections require organization, effort and citizen participation. All were present in abundance Saturday in Grand Rapids.” Another group, “Pure Integrity for Michigan Elections,” declared, “If the effort serves as a microcosm of the nation, the republic got its game back.”

The Michigan nominee for governor will be chosen in primary elections on August 2, with none of the 10 candidates who have filed yet catching fire or gaining Trump’s endorsement. The courageous and forthright approach of DePerno and Karamo should be a touchstone for those candidates. Karamo, who got 67 percent of the vote on the first round, has stressed that she will fight for the republic, not the Republican Party, and that the door must be open to democrats and independents alike. DePerno has consistently attacked the globalists and the elites and named their names, like George Soros, Bush, and Obama. Anyone who was in the convention and saw the passion and determination of the DePerno and Karamo supporters as they marched around the floor, dominating the event, saw a lesson in how to take over the Republican Party.

The LaRouchePAC seven-person team of delegates and alternates included Ron Kokinda, who had just filed to run in the Republican primary for State Representatives in a largely blue-collar district outside of Detroit. Kokinda and the rest of the team circulated the “Third American Economic Revolution” endorsement statement and found party activists happy that we are providing leadership, and hungry for discussions on how to address the economic crisis and to forge a winning strategy for November.

The victory of DePerno, Karamo, and other grassroots candidates at the Michigan convention shows what happens when you show up and fight. To that, LaRouchePAC brings a clear understanding of the larger terms of battle and a strategy for victory.   And that is the pathway to turning the Republican Party into the party of Lincoln, LaRouche, and Trump.