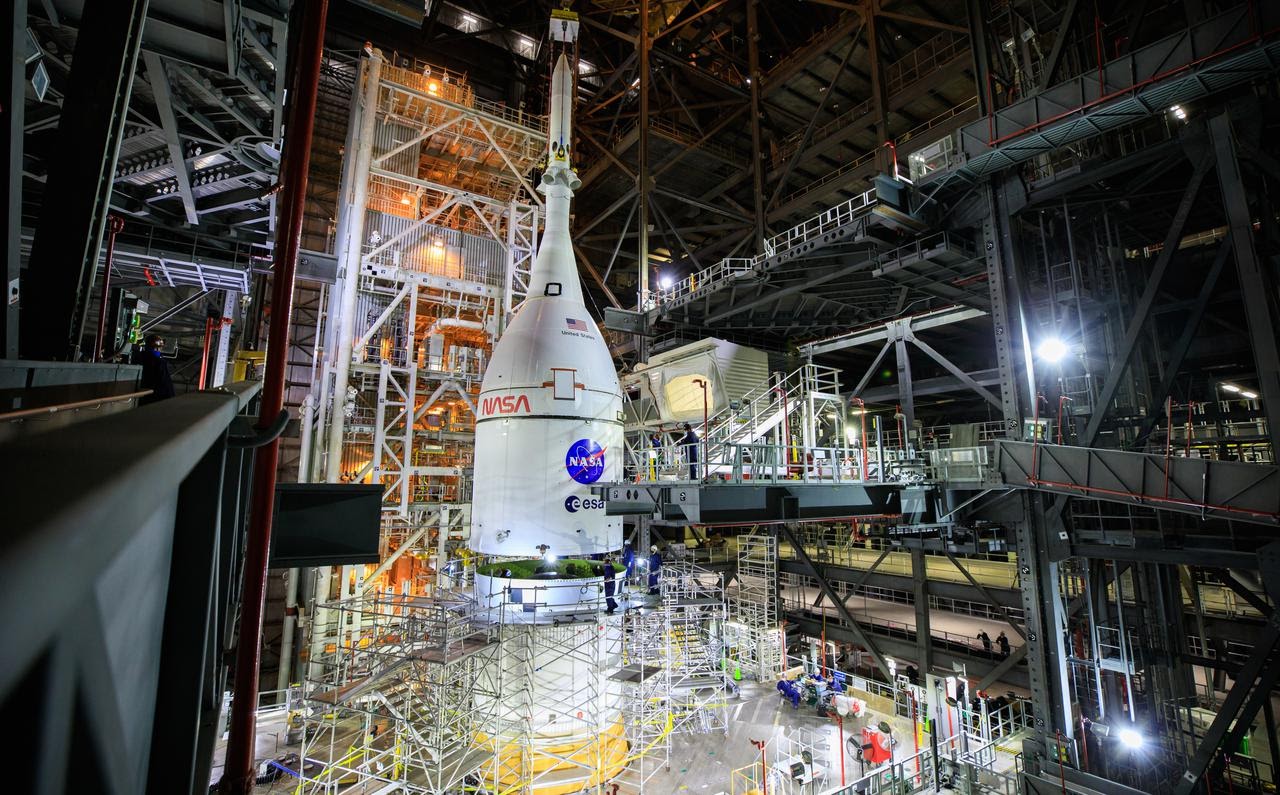 Big News! Did you hear? On Wednesday, Oct. 20th, NASA successfully stacked and secured its Orion Spacecraft atop of the fully assembled Space Launch System, SLS Rocket at Kennedy Space Center. SLS and Orion stand 322 ft tall in the vehicle assembly building. The completed vehicle will undergo tests inside the Vehicle Assembly Building, VAB, before being rolled out to Launch Complex 39B later this year. Artemis1 is scheduled to launch no earlier than February 2022. It  will be the first uncrewed integrated test flight of NASA's deep space exploration missions. The Orion Spacecraft will launch on top of the SLS rocket and travel 280,000 miles from earth over the course of a 3 week mission.

Did you know that SLS will produce 8.8 million pounds of thrust during lift off and ascent to launch a 6 million pound vehicle? The SLS five-Segment booster is the largest solid rocket motor ever built for flight. The rocket is also powered by 4 RS-25 engines developed by Aerojet Rocketdyne. For a quick comparison, the Apollo era Saturn V fully fueled for liftoff, weighed 6.2 million pounds and generated 7.6 million pounds of thrust at launch. The Space Launch System Rocket, SLS, will be used to ferry cargo and crew to the moon and beyond.

The Cryogenic Propulsion Stage will give Orion the push needed to leave Earth's orbit toward the Moon.

The Orion Stage Adapter on top of the SLS rocket includes a structure housing 10 CubeSat rideshare payloads that will be deployed on Artemis-1.  To name a few of the fascinating CubeSats loaded and ready to fly are the LunaH-Map: The Lunar Polar Hydrogen Mapper, developed at Arizona State University. It will map the hydrogen content of the entire South Pole of the moon at high resolution, including within permanently shadowed regions. The CubeSat to study Solar Particles, or CuSP, will orbit the sun in interplanetary space. CuSP will observe particles and magnetic fields streaming away from the sun before they reach Earth, where they can trigger geomagnetic storms and other space weather events.

LunIR, the Lunar Infrared Imaging mission will perform a flyby of the moon to collect thermal imagery of the lunar surface. EQUULEUS, The Lunar-Earth point 6U Spacecraft will travel to the Earth-moon L2 Lagrange point beyond the far side of the moon. The mission was developed by the Japan Aerospace Exploration Agency and the University of Tokyo. It will image Earth’s plasmasphere, observe impacts on the lunar far side, and demonstrate low-energy trajectory control maneuvers near the moon. Learn more about additional cubesats ready to fly at NASA.gov.

Re-Americanizing the US Economy with the Power of Scientific Progress

Now some of you reading this may be saying, "That's cool and all, but have you seen the economy lately?” “Do you not realize we are in a hyper-inflationary crisis?” Yes, exactly. That is why the success of Mission Artemis is so critically important. The key to rebuilding our economy starts with a Mission. The Artemis Program initiated under President Donald Trump in 2017, outlined a bold vision to return American Astronauts, with the help of international and commercial partners, to the Moon, for the first time since 1972, the last time Americans set foot on the Moon. The Trump administration outlined that the mission would land the first woman and the next man on the Moon by 2024. Fully unleashing the Artemis Generation will be the keystone to achieving this goal, and unleashing the greatest economic recovery our nation has witnessed in a very long time. Let’s get the facts straight here, this mission will not be accomplished under leadership that pushes policies of the radical Green New Deal, so called, “wokeness”, racial equity, and gender identity policies. It will not be done under a globalist system that bails out the financial elite, WallStreet and City of London bankers, over the citizens of this nation. Mission Artemis is the needed driver to truly make the United States a manufacturing superpower once again, to drive productivity, scientific and technological advancement. 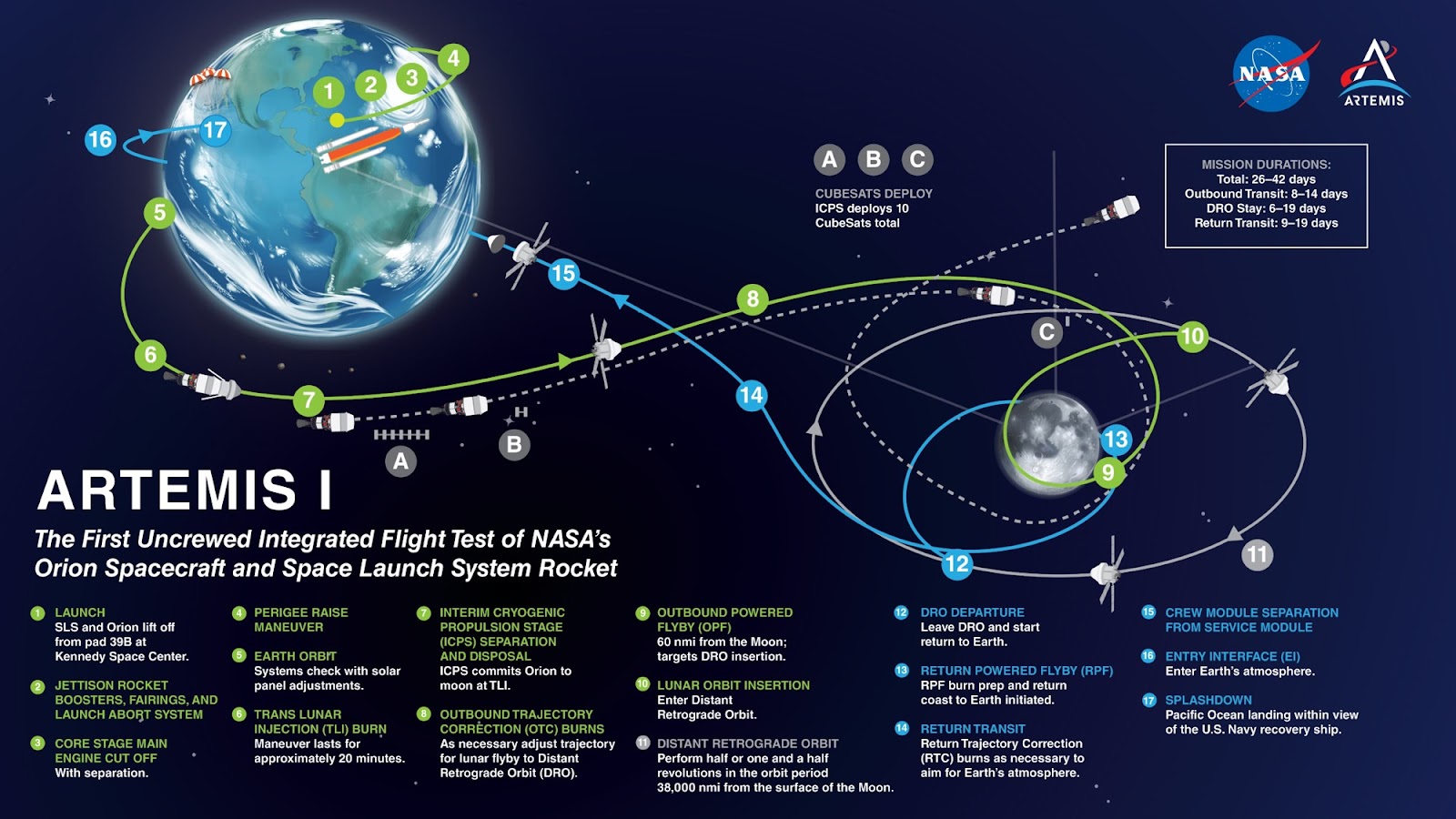 The LaRouche Political Action Committee’s, ‘Resolution to Re-Americanize the Economy’ calls for “a rejection of the failed doctrines of globalization, monetarism, and radical environmentalism, and a return to the economic principles which built our nation into a great productive power.” Central to this fight is pushing the frontiers of science and technology, led by fusion and space technologies.