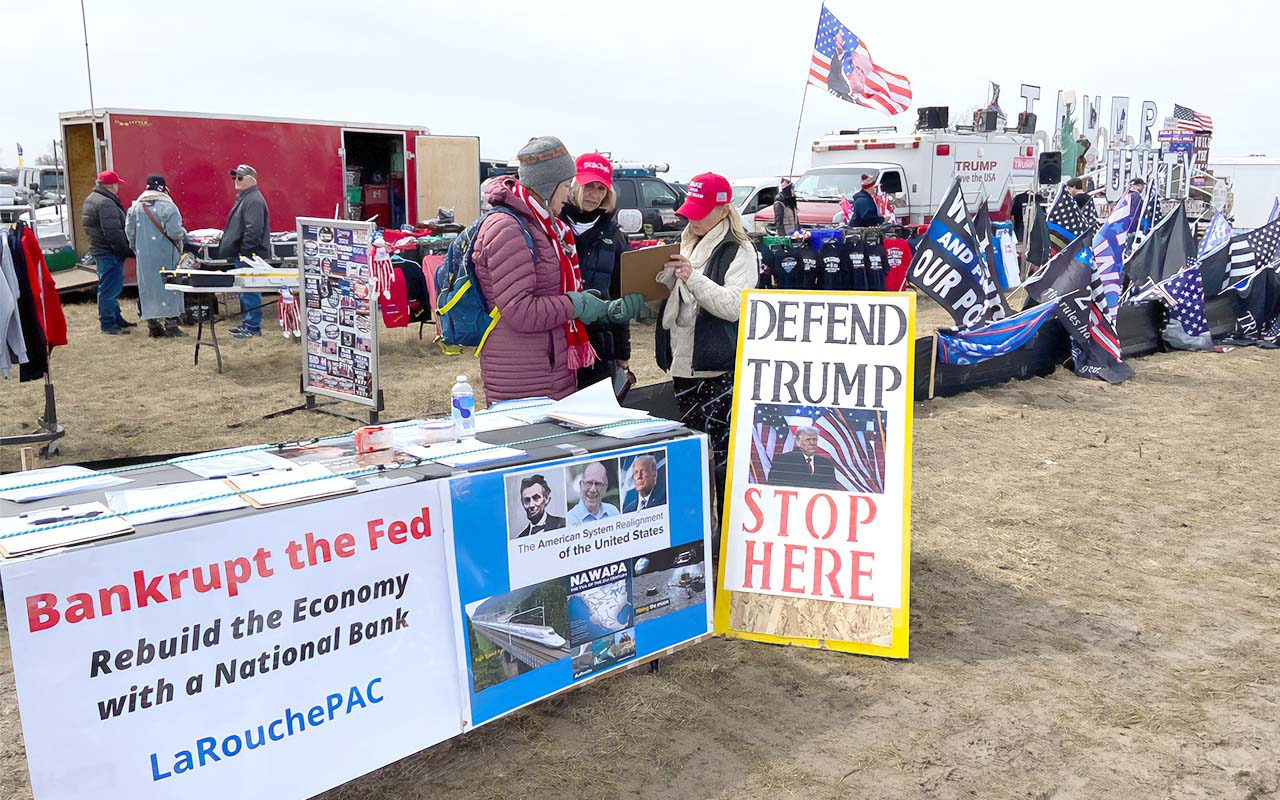 Organizing at the event. Photo: LaRouchePAC

“Remember in January 2017 when Donald Trump was inaugurated, and he stood on the steps in Washington DC? I remember that picture, with those two people sitting over his left shoulder—George W. Bush and Barack Obama. I remember that picture vividly, because President Trump said to every one of us, “Today, I give the country back to the people.”

So spoke Matt DePerno, candidate for Michigan Attorney General, after being introduced by Donald Trump at an April 2 rally in Washington, MI.

DePerno’s words should bring to mind Benjamin Franklin’s injunction, “I’ve given you a republic, if you can keep it.”

The overwhelming characteristic of the battleground Michigan rally was the determination of the thousands upon thousands of patriots who came together, not just to support Donald Trump and the candidates he has endorsed, but to take back and to keep the American republic.  Kristina Karamo, candidate for Secretary of State, channeled that spirit when she thanked Donald Trump for inspiring “so many people to run for office, to stand up and fight back. Because he cannot do it himself. There is an army of people across our state.”

I was part of a team of LaRouchePAC organizers that arrived at the rally site at 8 in the morning and spent the rest of the day organizing the highly animated crowds that lined up to get into the huge building that evening to hear Trump and his endorsed candidates, like DePerno and Karamo. Thousands didn’t get into the 5,500-seat building and watched on a huge outside screen in the cold. It’s hard to capture the spirit of the day—a combination of passionate commitment to save the nation and the future, eagerness to DO something, and just plain happiness and joy at being surrounded by fellow patriots. Despite the April chill (and the mud), people spent the day walking amongst myriad tables and tents set up by candidates, organizations, and vendors, beneath flags flapping in the wind, and an occasional marching drum beating.

The LaRouchePAC message was straightforward: We must get rid of the Federal Reserve or Trump will not be able to take on the globalists or save the economy. Despite the eagerness of participants to get into line, our message stopped people in their tracks for two primary reasons: almost universal recognition that the Federal Reserve is unconstitutional and destructive, and the fact that we were putting forward a solution. People would stop in front of our table, read the sign, “Bankrupt the Federal Reserve, Rebuild the Economy with a National Bank,” walk over and sign up. In addition to the hundreds of people who signed up with us to join the fight, a number of candidates engaged in substantive discussion and want to stay in touch. Thousands of leaflets, about the Federal Reserve and the global strategic crisis, were distributed.

LaRouchePAC’s presence in Michigan goes back decades and continues to grow. One person said, “I met your people at the University of Michigan in the 1990’s, I still have some of your pamphlets in my closet,” or “I met you when you were organizing in the airports in the 1980’s.” Countless activists said, “I’m on your email list,” or “I just got your text,” or “I’m on your zoom calls.”

In 1988, shortly before he was jailed (as a result of a series of witch hunts which began with the notorious Robert Mueller), Lyndon LaRouche gave a speech in which he discussed the principle of “people’s war.” In “people’s war,” he said, there are no front lines and everywhere is a front line, and one might be fighting alone in a remote village, with no one to see one’s sacrifice. But the power of such war, he said, is the fact that the higher principle which drives people is what will defeat a seemingly superior enemy.

At the time, it seemed like a remote concept, at least in my mind. But if you look at what has erupted in this country, especially in the wake of the stolen election and the enormous attempt to cancel and crush Donald Trump, his movement, and the truth, the concept comes alive. Throughout these months and recent years, millions of people have taken it upon themselves to act: to form groups, to challenge mandates or vote fraud, to stand up to their school boards, to run for office—all driven by the passion to defend the principles of the U.S. Constitution. Perhaps in the United States, we might call it “citizens’ war.”

That citizens’ movement now needs an officer corps, equipped with the strategy to take back political and economic power over the coming months and years, and to keep it. The political side of that is well underway, as was seen in the quality of candidates who joined Donald Trump on the stage in Michigan. As Matt DePerno said, “No longer will we allow the elites in this country to control our elections and to control us.”

LaRouchePAC’s fight to abolish the Federal Reserve and restore American banking is the economic flank in that citizens’ war for our Republic.