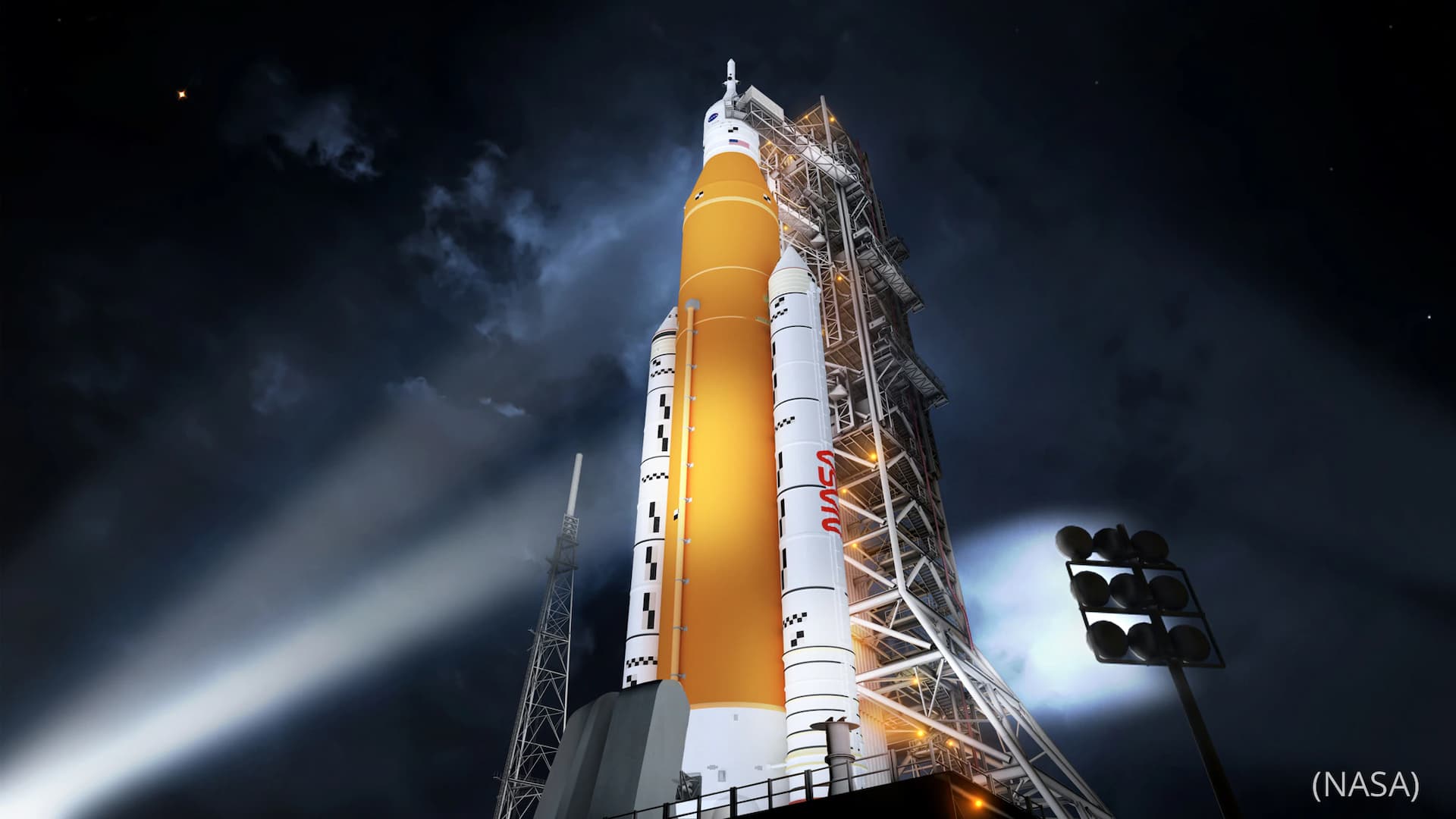 NASA’s new rocket, the Space Launch System, will send astronauts to the moon on the Artemis missions. (NASA)

In a preceding post on this website, Michael Carr provides one perspective on the term, “the pursuit of happiness,” found in our Declaration of Independence. He writes,

“Ours was an entirely new mode of governance, not based on “models” from the Old World. Rather it was based on an examination of why those modes of government had failed to progress:  to create a posterity which in turn created a better posterity in each succeeding generation.”

In the first class in our new LaRouche PAC class series dedicated to demonstrating the actual nature of our republic, Robert Ingraham explored the concept of “the pursuit of happiness” at length. It is centered in the idea that all people share in the creative power of God. Happiness is the exercise of that creative power on behalf of the common good. This concept comes from Gottfried Leibniz and the European Renaissance, and it was pervasive in the culture of the founders. If you watch Bob’s class, it will destroy all the myths you have been taught about this nation’s founding documents.

Put simply, in our founding and in our better times, we delighted in boldly exploring new frontiers and advancing new discoveries which transformed our society with genuine material and spiritual progress. President Donald Trump invoked just this “pursuit of happiness” when he committed the nation to returning to the Moon for the first time since the Apollo 17 Moon landing in 1972, via the Artemis program. In 2020, President Trump noted, “The essence of the American character is to explore new horizons and to tame new frontiers.”  In accepting the 2020 Republican presidential nomination he declared, “Over the next four years, we will make America into the manufacturing superpower of the world . . . For America, nothing is impossible. Over the next four years we will prove worthy of this magnificent legacy. We will reach stunning new heights. And we will show the world that for America, no dream is beyond our reach.”

We have, truly, fallen behind on this mission. Rather than the bold optimism which develops the divine nature of human beings, our present culture degrades people to the status of feral beasts, defining them by their proclaimed and fixed sexual and racial identities. Despite the Biden collective’s devotion to this perverse idea (in service to the international financial oligarchs who run them) the American people keep rejecting this slave-based view of human beings. They keep creating and developing new ideas and new technologies because that is human nature. As Michael Carr pointed out, despite the best efforts of the oligarchs in London, Brussels, and New York, dozens of companies here are now “pursuing what would once have been deemed ‘impossible’ projects’”.

Here are some additions to Mike Carr’s list, drawn largely from the rapidly advancing technology of 3D printing as it is being applied in the Artemis program.

Rocket Lab has successfully launched a new NASA satellite to lunar orbit atop its Electron rocket, powered by a 3D printed rocket engine. The CAPSTONE satellite, built by Terran Orbital, is a microwave oven-sized CubeSat, designed to pave the way for humanity’s return to the Moon in NASA’s Artemis Mission. CAPSTONE (Cislunar Autonomous Positioning System Technology Operations and Navigation Experiment) will be the first spacecraft to enter a near rectilinear halo orbit. This orbit is the planned trajectory of the Artemis Mission’s Gateway outpost.

Lockheed Martin is using MakerBot technology to 3D print Acrylonitrile Butadiene Styrene (ABS) parts for a Lunar Rover being developed for NASA’s Artemis Mission. This process is extremely important for the advanced manufacturing needed for city building on the Moon and Mars, and the manufacturing of new cities here on Earth. So far, the furthest a 3D printed part has traveled in space is 1.7 billion miles to Jupiter.

Relativity Space, founded in 2015, is an American aerospace manufacturing company. It houses the world’s largest 3D printer, the Stargate. Stargate is a machine developed in-house that can produce unique geometries not possible using traditional aerospace manufacturing methods. Relativity Space has two rockets, the Terran 1 is the world's first  3D printed rocket. It is 115 feet tall and 7.5 feet wide, with a maximum payload capacity of 2,756 pounds. Their second-generation rocket, the Terran R, will be 216 feet tall and 16 feet in diameter, with a payload capacity of 44,100 pounds. The Terran 1 is scheduled to fly this Summer (2022) and the Terran R, the company’s fully reusable, fully 3D printed rocket, is scheduled to launch in 2024. Relativity Space recently announced $1.2 Billion in launch service agreements for Terran R, and Relativity Space has signed a multi-launch agreement with space-based communications firm, One-Web, to launch its Low Earth Orbit satellites in 2025.

As America prepares to return to the Moon and build the Lunar platform for missions to Mars, companies like AI Space Factory are building advanced construction technology for Earth and space. AI Space Factory's most innovative technology is its complete automation of 3D printing construction. Innovations in robotics, control algorithms, materials, and design, result in a state-of-the-art, full-service 3D printing construction service. NASA’s Kennedy Space Center and AI Factory have unveiled their designs for NASA’s 3D printed Lunar outpost LINA.

When President Kennedy announced the space program, he said the mission would “serve to organize and measure the best of our energies and skills.”  So, too, with Artemis. Success here requires the building and training of an expanding skilled labor force operating on the frontiers of science and technology, something which can be fully accomplished through a Space CCC.  Brian Lantz devotes a full chapter to this concept in his development of the types of immediate projects which would come under the auspices of a Third National Bank of the United States. There are emerging programs already addressing the skills gap, such as the collaboration of Lockheed Martin with the Space Business Roundtable of Colorado in next generation 3D printing, and in an additive manufacturing lab for advanced aerospace components at the Metropolitan University of Denver.