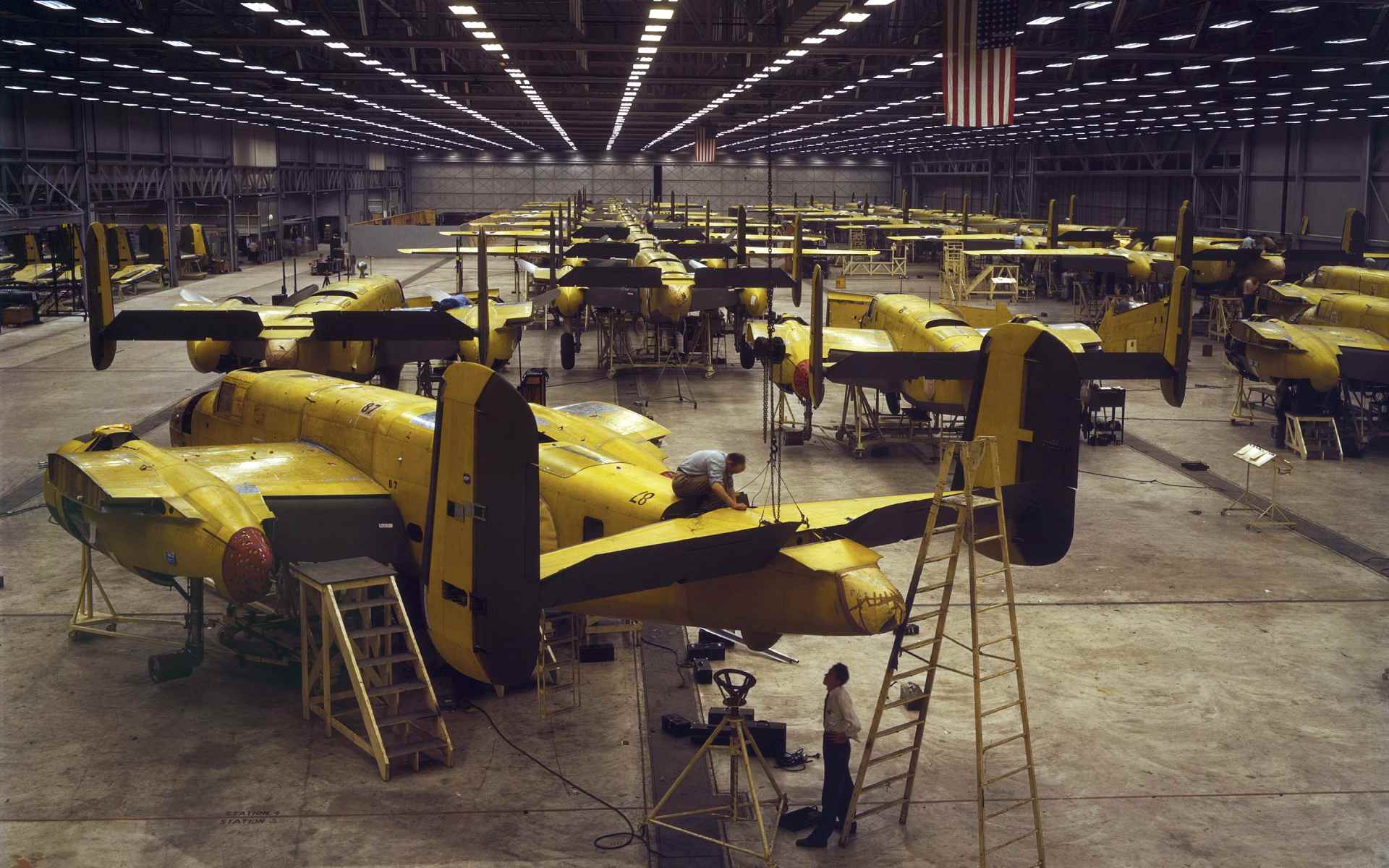 Assembling the North American B-25 Mitchell at Kansas City, Kansas (USA), 1942. Photo by employee of the US Office of War Information

The “experts” have failed us miserably.  We shall not go down with their ship, but seek a pathway which builds upon the revolutionary successes of our past.  We have most of what we need to create a wonderful future for all humanity, but we must trash the destructive foreign ideas which have polluted our minds and replaced determination with confusion.

Or, as Lyndon LaRouche put it in his masterful 2005 study of ending Globalization: “The problem here is not competently understood within the bounds of what is customarily conceived to be ‘economics’ as such, but, rather, as I shall now show, this problem must be seen as the task to be accomplished by freeing the mind from imprisonment within the wild-eyed incompetence with which the meaning of the term ‘economics’ is usually misunderstood by the presently reigning generation.”

Everyone who can do so should master LaRouche’s study in its entirety.  The LaRouche PAC Resolution to Re-Americanize the Economy is designed to help people clear their heads of confusion. Let’s look at the first of its four points: “Protecting technologically progressive manufacturing and agriculture against unfair competition from globalist exploitation of cheap labor.”

Look at the past 150 years of our actual economic development.

Henry Ford, who grew up on a farm but did not like farm chores, dreamed of a way to bring affordable mechanical power and mobility to farm families to ease the burdens of farm life.  He loved farmers, but hated farm chores.  While other machinists and automobile builders were content to build small numbers of very expensive vehicles for oligarchs and wealthy individuals, Ford took the existing technologies and drove them rapidly forward—eventually succeeding in transforming both rural and urban living conditions for the better across the world with his first mass produced vehicle, the Model T.  The Model T not only provided inexpensive, reliable transportation, but also portable rotary power to farm equipment.  (The Ford Motor Company is now returning to this latter objective with a new electric pickup truck which features silent 110 and 220 volt regular AC receptacles to power machinery on job sites or in the backwoods.)

In the footsteps of Henry Ford, today you see Elon Musk’s Tesla building factories around the world to build vehicles for the local and regional economies.  Such factories spread new technologies and capabilities to new countries.  That is quite a different intention from that expressed in the stories we encounter today, in which an American worker is told to train a foreigner before the foreigner steps in to take the American’s job; or the even more prevalent story in which an “American company” (after having been put under regular “Business Administration” methods by the London or Wall Street oligarchy) closes up shop and moves its production abroad.  The distinction between the two orientations is the distinction between the oligarchical view that people are just talking animals to be brought to heel, as against the Renaissance or American view that the minds of people are the greatest economic assets in creating a better future for all.  The American intention is to raise ourselves and the world up to a higher level.  The oligarchical intention is to drive wages and living conditions down to the level at which people become first pessimistic and later fatalistic, and resigned to the fate of being underlings.

We are not underlings, nor would we wish anyone else to be.  Alexander Hamilton’s vision was correct:

“To cherish and stimulate the activity of the human mind, by multiplying the objects of enterprise, is not among the least considerable of the expedients, by which the wealth of a nation may be promoted.  Even things in themselves not positively advantageous, sometimes become so, by their tendency to provoke exertion.  Every new scene, which is opened to the busy nature of man to rouse and exert itself, is the addition of a new energy to the general stock of effort.”

Just think about how Hamilton’s progression works:  Andrew Carnegie, who first worked for a telegraph company and then a railroad, took up steel fabrication to build a railroad bridge across the Mississippi, and basically built the modern steel industry.  Thomas  Edison,  who  worked  for  telegraph  companies,  later  created  the  electric  power  industry  and  made  modern  telephony  possible  with  a viable microphone.  Henry Ford, who worked for Edison, later created the modern automotive industry.  William Shockley, who worked for AT&T’s Bell Labs, participated in developing the first silicon transistor. In attempting to create mass-produced transistors, Shockley hired Robert Noyce, who led the team which came up with integrated circuits and then central processing units.  Who knows how many companies in Silicon Valley were created by people initially hired by Noyce?  How many new companies are now being started by people who have worked for Elon Musk’s SpaceX or Tesla?

A smart businessman does not look for lackeys to hire.  He or she looks for genius, for competent creativity.  After solving one problem, the creative worker or employee may find a related application for his approach in another field.  So the Wright brothers took bicycle technologies and applied them to controlling flight.  So, Henry Ford branched out into farm machinery and aircraft.

The production floor, just like the university or national laboratory, is an incubator of new industries and new technologies.  Transferring factories to low wage nations undermines the incubation of new industries.  It is true that low-wage workers and engineers may also develop some new technologies; however, the Hamiltonian American system is intentionally set up to foster new technologies and new industries.  The American people, and especially creative people like Ottmar Mergenthaler, John Ericsson, Wernher von Braun, Elon Musk, or Andrei Karpathy--who overcame all obstacles to come to America to be able to make a revolutionary contribution--are culturally predisposed to seek out revolutionary improvements in technology and life in general.

This process of progress is what must be protected!  Over the course of American history, successful protection has come in the form of protective tariffs, trade agreements and regulations; plus direct government interventions to fund large scale construction projects, research projects, and education/dissemination of new technologies.  Think about the land grant colleges, the transcontinental railroads, the TVA and rural electrification, the Manhattan Project, the Apollo Project, Project Warp Speed, Project Artemis.  We need not elaborate more on this, except to say that if we have the intention to protect and develop our industry, we have a toolbox full of known measures easily able to ensure the rapid build-up of our science/engineering and industrial base, and develop an increasingly more productive and better paid workforce.

The Empire Strikes Back

But even in America, and especially since the assassination of President Kennedy, the creative genius has faced fierce opposition from the empire.

The anti-American operations by the British Empire and its Wall Street fellow-travelers reflect the ancient oligarchical outlook, and are indeed aimed at literally killing off our nation.  Lyndon LaRouche pointed out that it is also the case that this process undermines the prospects of the low-wage countries as well, since the rate of positive technological progress worldwide is radically slowed.

The more highly-paid American worker is likely an owner of some sort of property—perhaps a house, or some land or a vehicle.  Ownership of such property involves the ongoing challenges of maintenance and perhaps improvement.  It is a cultural norm for Americans to perform much of such maintenance or improvement on their own, even though that is often completely foreign to their normal work or business experience or activities.  Such activities, along with other hobbies or travel/cultural/musical activities, provide a wealth of experience, continuing education and personal development which is brought into play in solving problems at work.  It is not the model preferred by the oligarchy!

Progress in society and the economy is dependent upon the reproduction of people at higher and higher potentials for creative revolutionary discovery and invention—or higher abilities to assimilate and implement such new ideas.  The initial process takes place over roughly 25 years—the length of time necessary to bring a baby into productive activity. Wages must pay the full cost of production of the new generations.  In other words, the family household condition over a minimum of one generation (and preferably two generations) is the minimal basis by which to really assess the condition of the economy.  Measuring short-term conditions on various markets in mere dollar terms will not tell you anything of importance.  How are the families doing?  How are the prospects for the young folks coming up?  Will a typical young person of ability and character be able to support himself and a family in reasonable living arrangements which will produce an even better generation 25 years hence?

If you have noticed that the answers to these questions have become increasingly negative over the recent decades, you are smarter than all of the professional economists.  In fact, the oligarchy has been waging war upon the United States by attempting to lower American living conditions down to the level faced in the British Empire’s former colonies, while the American approach is to raise conditions in the Third World to the better level we wish to achieve ourselves over the next decades.  Sometimes, actions of various societies and companies may seem to appear to have similarities.  But look under the surface at the intentions.  You cannot understand what is going on by looking at money-based statistics like Foreign Direct Investment.

This is not to demean low-wage workers abroad. Lyndon LaRouche developed an entire array of strategies to develop the “Third World” nations and bring their productivity and living conditions up to the standards we wish to achieve for children in America.  His strategies centered around building an alliance of at least the four most powerful republics, the United States, Russia, China and India—to finally shut down the British Empire and its speculative financial system, and set up a New Bretton Woods world credit system, with national banks in each country to finance internal improvements, and enable exports of high-technology goods such as nuclear power plants and high-speed rail systems to developing nations.

Today the British Empire and its artificial creation, the Biden Administration, tremble in fear.  They very much fear President Trump, but what they really fear is you.  A few thousand Americans like you, armed with knowledge of the history and principles of American System economics, can not only lead the world out of British Imperial destruction, but create a world in which constant progress uplifts people across the Earth and spreads such successful society into the Solar System and beyond.

Take what you already know and spread the word.  Circulate the “Resolution to Re-Americanize the Economy.” Keep studying the work of LaRouche, but don’t wait to act.  You already know more than the bought-and-paid-for “experts.”