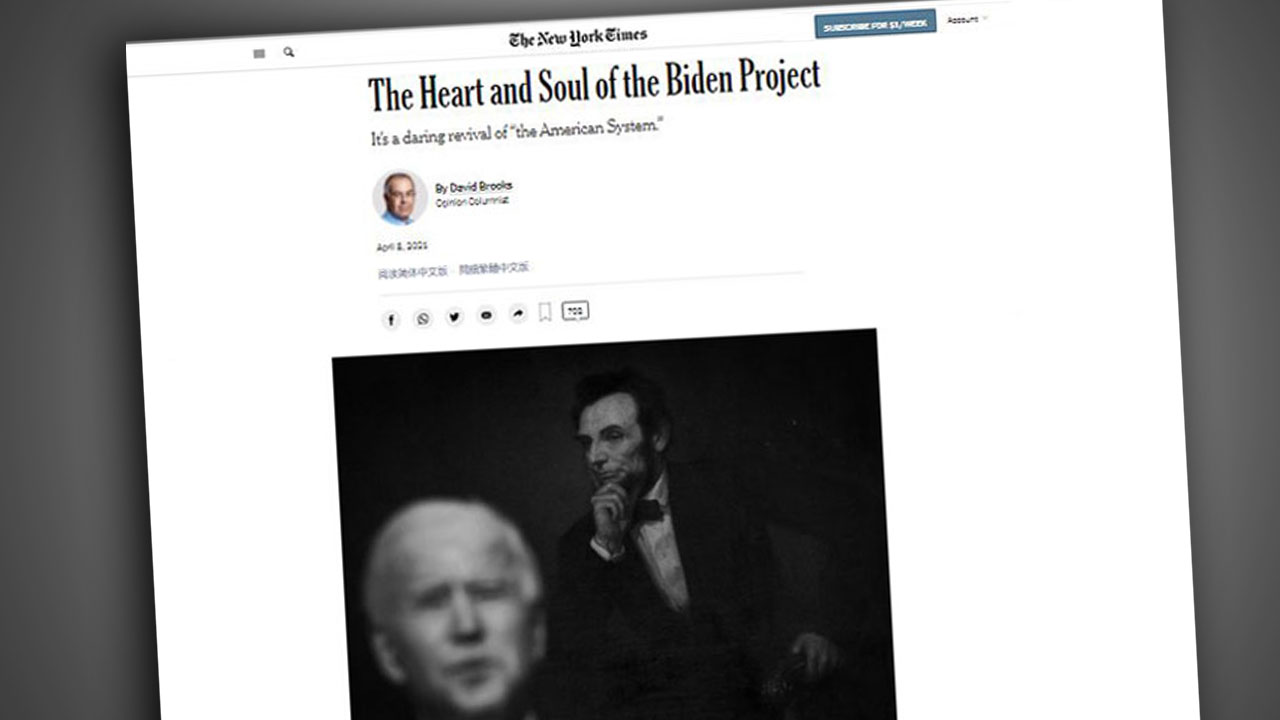 David Brooks’ latest opinion column in the New York Times causes any American knowledgeable about physical economy to pause, cock their head to the side, and ask themselves, “Could this guy possibly be that clueless?”

Despite his title, “The Heart and Soul of the Biden Project: It’s a daring revival of ‘the American System,’” the Biden plan is an absolute failure with respect to the American System of economy (and if this is Brooks’ idea of “daring,” I’d hate to interrupt a riveting session of him watching paint dry). While he (mis)uses the phrase, “American System,” and throws out references to its early developers and proponents of the American System—Alexander Hamilton, Henry Clay, and Abraham Lincoln—there is no indication he has the slightest insights into the basic principles that make the American System successful.

Absolutely nothing is presented demonstrating how Biden’s plan would increase the productive powers of the U.S. labor force, or how it would increase free energy generated in the economy.

Instead, Brooks gushes over plans to “distribute money” here, “funnel money” there, claiming that “pouring money” into the economy is now a “monster-size,” “daring leap” of a “massive bid” toward a “massive investment” on a “mammoth scale.” And the examples provided for what we’ll get from this monster-sized, daring, massive, mammoth investment? The green downtown revitalization of Fresno, California and Greenville, South Carolina. Governor Pat Brown, get out of here with the California State Water Project; President Kennedy, step aside with your Apollo moonshot; President Franklin Roosevelt, to the back with the Tennessee Valley Authority and the Manhattan Project. With the Biden plan, “ugly highway bridge[s] [can be] removed and replaced with gorgeous walk[s].”

More importantly, beyond populist efforts trying to buy off Americans by “pouring money” throughout the economy, the Biden collective’s plan for 100% carbon-free power by 2035 is guaranteed to devastate the economy. The massive increases in physical (capital goods and labor) costs required would drastically drive up electricity prices for families and businesses, lower the productive powers of labor throughout the energy sector, and crush the free energy production of the economy as a whole.

You can create all the jobs you want, but if those jobs are collapsing the economy, what idiot would be gushing over that? John Maynard Keynes famously wrote of having the government pay for people to dig holes and then fill them back up again. With the carbon-zero and green energy focus, the Biden collective’s plan is worse, equivalent to paying people to dig holes, throw their shovels into those holes, and fill them back up by hand. But, hey, it would be a “mammoth” of a job.

What we actually need is a deeper understanding of the true value and importance of infrastructure, as Lyndon LaRouche began developing in 2010-2011, and a commitment to the large-scale infrastructure projects and science driver programs which will most rapidly and effectively increase the generation of free energy and the productive powers of labor throughout the economy.

As LaRouche described in a June 2010 LaRouchePAC TV weekly report:

“When you’re investing in infrastructure, you’re not just investing in something to make things more convenient. It’s not like building highways, the way we’re building highways in recent times. Infrastructure enables mankind to increase the quality and quantitative feature of productivity of labor, as a qualitative step upward. And therefore, infrastructure, as such, when it’s applied in this way, to mankind, introduces a qualitative leap upward in the possibility of productive economy, that is, agriculture and industry depend for their improvements, based largely on the factor of basic economic infrastructure, as I’ve just identified it.”

What investments, today, can bring about such qualitative leaps upward in the potential of the economy to achieve levels of productivity higher than what was possible before?

A crash program for the rapid implementation of the most advanced forms of nuclear fission power, together with the development and commercialization of thermonuclear fusion power. We should be looking at bringing an additional 1,000 gigawatts of electrical power online over the next generation, increasing the total energy consumption per capita around 50% (while providing this higher level at the same, or lower, physical costs to society).

The development of a national grid of magnetic-levitation rail systems, capable of operating at speeds of more than 300 miles per hour. Solving the water challenges of the west by providing the equivalent of five or more new Colorado Rivers worth of fresh water to the western half of the continent—replenishing the depleted groundwater stores, securing water for existing needs, and providing new supplies for the development of new territories.

Each of these would generate qualitative leaps in the potential of the economy. Pair this with a science-driver program to build manufacturing operations on the Moon and develop the space infrastructure to sustain a human settlement on Mars, and we have a real mission for this nation, one that will actually develop the labor force, bring the U.S.A. back into the forefront of technological development, provide meaningful jobs, and ensure we have an economy in which families not only can afford education and healthcare, but also their quality will be constantly improving.

This is how we solve our problems, by committing to qualitative leaps in the level of infrastructure and technologies permeating society. This is something our American System forebears understood, but many today clearly do not.