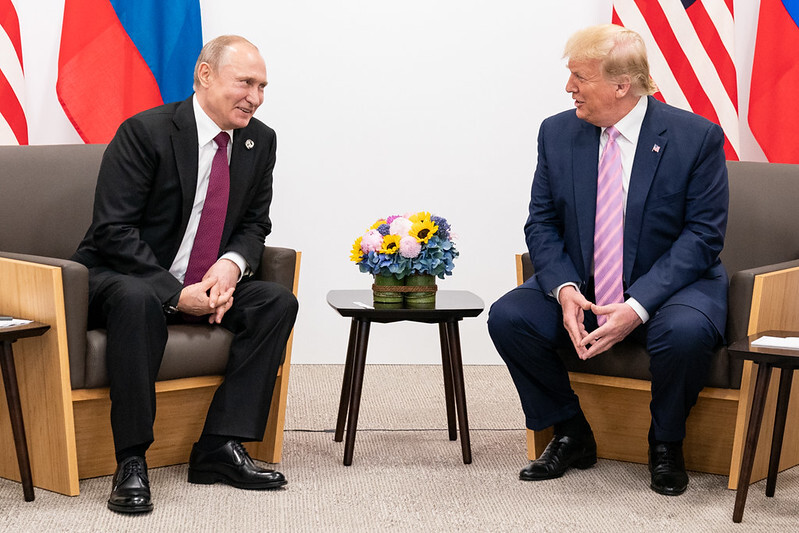 Behind current Ukraine crisis is the British Empire's fear of leaders, such as Trump and Putin, acting in the interests of their sovereign nations. Official White House Photo by Craighead https://www.flickr.com/photos/whitehouse45/48144141372

Behind the “fog of war” histrionics of Biden, the Tory Washington, DC uniparty, the media, and their British masters, stands a simple reality. Russia just said no to the global elite’s NATO expansion into Ukraine, just as the Canadian truckers said no to the globalist game-plans of the Davos-controlled Justin Trudeau.

What is going on in the world is not about “Russia vs Ukraine,” “Russia vs the United States,” or any nation versus any other nation. This is a showdown between sovereign nations versus a global imperial elite (along with their neo-Nazi allies). And it is an extension of the revolt that began with the shocking-to-the-elites-victory of Donald Trump in 2016, a revolt which continues to strengthen to this day.

Clear thinking by Americans will now be a decisive factor in how this fast-moving world dynamic unfolds.

In the days before Russia’s actions in Ukraine, it was clear that the ruling elites had lost control of the American (and Canadian) people. Working people and other traditionally Democratic constituencies were coalescing around the truckers’ movement and Donald Trump. Anti-war Democrats were joining with traditional conservatives in opposing U.S. action in Ukraine (along with 75% of Americans in a poll taken before February 24.)

The Empire needed this war. Perhaps they believed their own narrative, that Russia would back down. But they needed it for other reasons.

From the standpoint of America’s “national security state,” its only possible road to survival requires a new national emergency like that after 9/11 and the submission of the U.S. population, which is now in revolt against Washington's police-state measures and rule by irrational fears. Now the raging inflation created by the globalist attempt to ban fossil fuels, embraced by Biden, and the Fed’s money printing, which has kept Wall Street and the City of London afloat since 2008, can be blamed on Russia. Before the Cold War turned hot, USA Today’s headline spilled the beans, “Pandemic, insurrection and now a new Cold War, for Joe Biden, a presidency full of crises.” They need perpetual crises to cling to power.

They are also frantic to keep the Republican Party from becoming the party of Donald Trump and are desperately playing up the neo-con war faction of the party, which undermined President Trump’s foreign policy throughout his Presidency, and is indistinguishable from the neo-liberal Democratic Party.

Why and How the British Created This Crisis

Start with the 2018 British House of Lords report, “British Foreign Policy in a Shifting World Order.” Who and what did the British elite target in that report? 1. President Trump, because, as the report asserted, the U.S.-British special relationship (and hence Britain’s role in the world) would not survive a second Trump term. 2. The world’s four superpowers—the U.S., Russia, China, and India—because, as Lyndon LaRouche proposed, the combination of those four nations could end the grip of global empire over the planet.

The targeting of Russia has been underway since the break-up of the Soviet Union. Russia was promised that NATO would not expand into the former Soviet Republics. Sane U.S. strategists (which used to exist in our government) recognized that such expansion would pose an existential threat to Russia and would ultimately result in the very situation we face today. Those promises were trashed as successive presidents (George H.W. Bush, Bill Clinton, George W. Bush) brought former Soviet republics, all along Russia’s borders, into NATO and armed them against Russia. The capstone of this campaign was the 2014 U.S.- and British-directed Ukraine coup which overthrew the duly elected President, Viktor Yanukovych, and installed a puppet regime, overseen by Joe Biden and heavily infiltrated and controlled by outright neo-Nazis.

Since the 2014 coup, no Ukrainian government has been able to defy the wishes of Ukraine’s neo-Nazi defense forces, or the British and American occupiers dictating a policy in which Ukraine exists only as a vassal state—a platform for attacks on Russia. One of the first acts of the Biden/Nuland-created Ukrainian government was to institute a ban on the Russian language which was spoken as a native language by large parts of the population. In addition, there were systemic attacks on the Russian Orthodox Church. The Russia-hating Right Sector defense forces were mobilized to ethnically cleanse the historically Russian Donbass, and attacks against the Russian-speaking eastern enclaves of Donetsk and Lugansk in the Donbass have continued in a war which has killed an estimated 15,000. In Odessa, during the U.S./British coup, misnamed as the “revolution of dignity,” 39 anti-Maiden activists were killed when the neo-Nazis torched the Trade Unions Building where they had sought safety.

In December 2021, Russia said enough. Russia was out of its historic patience. It drew red lines over Ukraine and NATO expansion, asserting existential threats to Russia. The U.S. and the British refused to entertain or even rationally discuss the Russian security concerns. Instead, they mounted a propaganda offensive attacking Russia, proposed drastic economic sanctions prior to any Russian actions in Ukraine, and mobilized their Nazi-dominated vassal forces in Ukraine to attack the historically Russian population in Eastern Ukraine’s Donbass. In recent days, Washington’s madmen also talked about giving Ukraine nuclear weapons.

The Challenge Before Us

If the ruling elite fail to whip the American people into a war frenzy, and if we avoid World War III and/or an emergency dictatorship, February 24 may turn out to be the high-water mark of the globalist imperial system. It is now up to us to equip the American people with the full strategy for victory, with the economic, strategic, and cultural policies that can restore our power as a sovereign nation. At the center of that battle is LaRouchePAC’s campaign to bankrupt the Federal Reserve and replace it with an American National Bank. The 2022 midterms will be the first step in that fight, on the way to 2024.