A statement for endorsement by candidates, organizations, elected officials, and constituency leaders (check out our campaign page for the latest updates and organizing material):

Abolish the Federal Reserve and Restore our Sovereignty with National Banking

If the United States is not soon liberated from the criminal system of private central banking which has occupied our nation since the establishment of the Federal Reserve System in 1913, and returned to the principles of national banking, our people, our economy, and the U.S. dollar will not survive. Inflation, the danger of hyperinflation, supply chain breakdowns, deindustrialization, the illegal drug epidemic, food, energy, and water shortages--all are the ultimate consequence of surrendering our economic sovereignty to a consortium of global financial interests, headquartered in London and Wall Street, which uses its monetary power to control nations and parasitize economies.

The United States is uniquely positioned to do this, being the only sovereign republic in the world to have twice established a system of national banking for the purpose of promoting the general welfare and advancing the productive powers of its population.

America’s political independence from the British Empire was secured by its economic independence which was established through Alexander Hamilton’s First National Bank. The unique mission of the Bank was to promote the development of physical economy through the increase in the productive powers of the human mind. Just as the American Revolution established, for the first time, the principle that all men are created equal and endowed by their Creator with certain inalienable rights, Hamilton created institutions which, for the first time, were based on the principle that wealth comes from the productive powers of the human mind, not from the control of money.

Since that time, central banks have tightened their power over the nations of the world, with a significant nodal point coming in 1971. As American statesman and economist Lyndon LaRouche uniquely recognized at that time, the August 15, 1971, decision to end the Bretton Woods system of a gold-reserve-backed dollar and fixed exchange rates would increasingly put control of the world economy in the hands of the global financial elite.

The 2008 financial meltdown, a crisis itself created by the Federal Reserve’s policies, was another nodal point, which launched a mad regime of monetary inflation which pumped up the value of speculative “financial assets” while gutting the productive economy. Millions of high-wage productive jobs were lost and hundreds of cities were shorn of their manufacturing base and abandoned to a future of poverty, narcotics, and crime.

Now, the central banks and their political, financial, and corporate appendages, such as the World Economic Forum, are prepared to carry out total war against what is left of national economies through never-ending sanctions regimes and the lunatic “green” agenda. The end result of collapsed economies, population reduction, and financier rule is the corporate fascism of which LaRouche warned fifty years ago. This must be stopped.

We therefore pledge to complete the Third American Economic Revolution, which starts with the following measures:

It is through this combination of eliminating the worthless mountains of speculative assets through a Federal Reserve bankruptcy, curtailing the power of the financial oligarchy, and supercharging and supporting our nation’s productive capacity through investments in frontier areas of science and technology, that we can quell the fires of inflation, reestablish the value of the U.S. dollar, and lay the basis for peaceful cooperation among sovereign nations to address the common aims of mankind, for ourselves and our posterity. 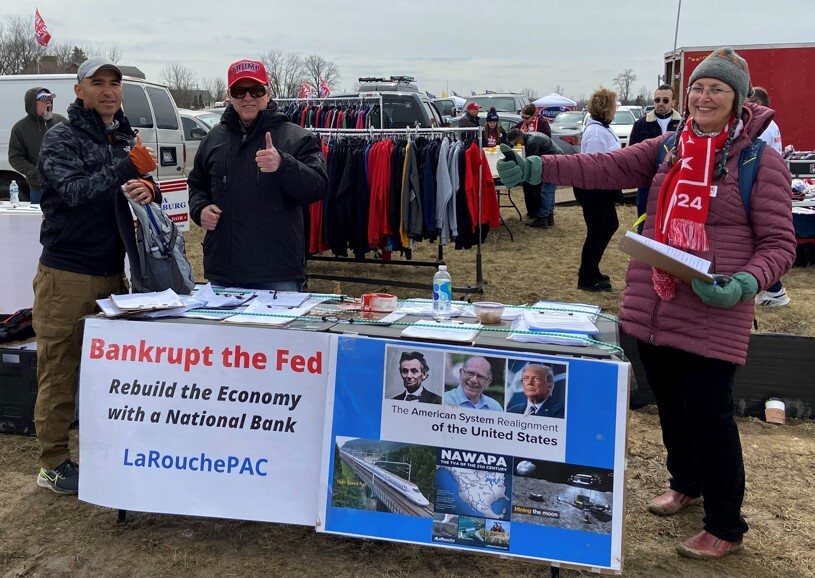