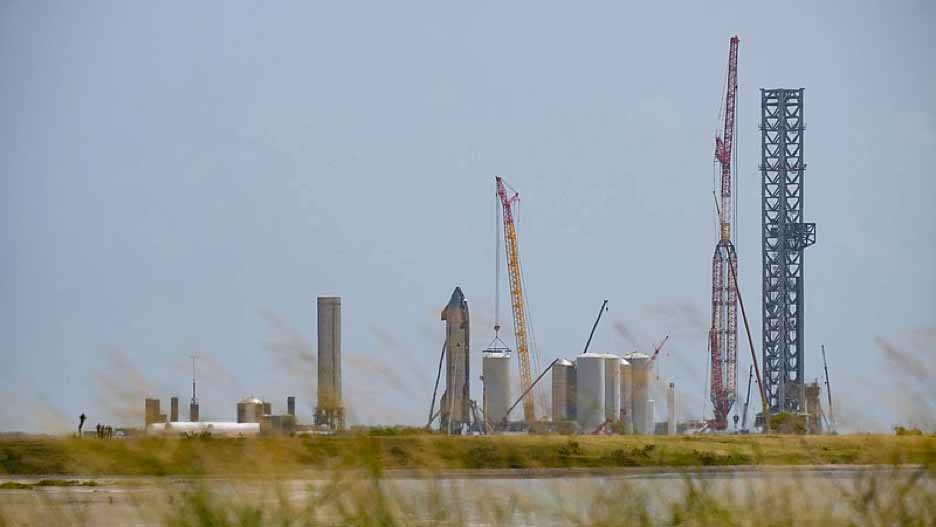 Starbase, Texas in September 2021, showing, from left to right, a Superheavy booster, Starship SN20, and the launch tower. CC/Lars Plougmann

Project Artemis, the visionary project initiated by President Trump to colonize the moon as a steppingstone to exploration of Mars, is being sabotaged by environmental quackery emanating from Joe Biden’s FAA and Biden’s British imperial controllers who are determined to kill U.S. scientific and technological progress and its corresponding mindset of optimism.

The latest victim of Imperial displeasure is SpaceX, which is the only private company in the world regularly launching astronauts into orbit on its own reusable rocket/spaceship system–the Falcon 9/Crew Dragon system. Last year, seeing the rapid progress being made by SpaceX on its self-financed development of the most spectacular rocket system ever conceived, the Starship/Superheavy, NASA gave SpaceX the contract for development of the Artemis Human Landing System (HLS)–with an intended first landing of people on the Moon by 2024. The HLS system is derivative of, and dependent upon the successful development of the Starship/Superheavy system.

Since Space X won the HLS contract, implementation was postponed by legal maneuvering and challenges from Jeff Bezos’ Blue Origin. That was finally resolved after several months, but then the Federal Aviation Administration (FAA) moved in to insist that the first orbital test flight of the Starship/Superheavy rocket system could not take place until the FAA was able to complete a Programmatic Environmental Assessment report on the project. So, the rapid suborbital test flight program came to a halt and the first orbital test, which was initially planned for late summer 2021 has been pushed back. Now, an “environmental review,” the tool used repeatedly over the past 40 years to cripple or kill virtually every major infrastructure or advanced energy project in the country, has slowed the process further to a crawl. This week, the FAA announced that instead of December 31st, 2021, the completion of its report has been pushed back to the end of February 2022.

So “environmental” bureaucracy and litigation is not only threatening to postpone the Artemis Project, but to cripple one of the few companies which is so far ahead of everyone else, that there really is no competition. In the same way, the once world-leading American nuclear/electric utility industry was reduced to a mere shell of its former self.

Every day that labor and capital equipment are delayed from developing or producing a product, is a day of expenditure without return. No company (and no nation) can long endure such treatment. As we move to implement the re-Americanization of the U.S. Economy, we must also move to end the continuous Imperial operations to undermine American progress via legal and bureaucratic measures which use environmental “concerns” as masks of their actual intentions.  Nowhere in the Declaration of Independence or the Constitution is “concern” for preservation of the existing “natural” order mentioned.  America has always been organized around promotion of the General Welfare via human intervention in the natural order for the common good of human beings based on mastery of the actual laws of the universe. That is the basis of the Constitution’s pledge to create a better world for ourselves and our posterity.