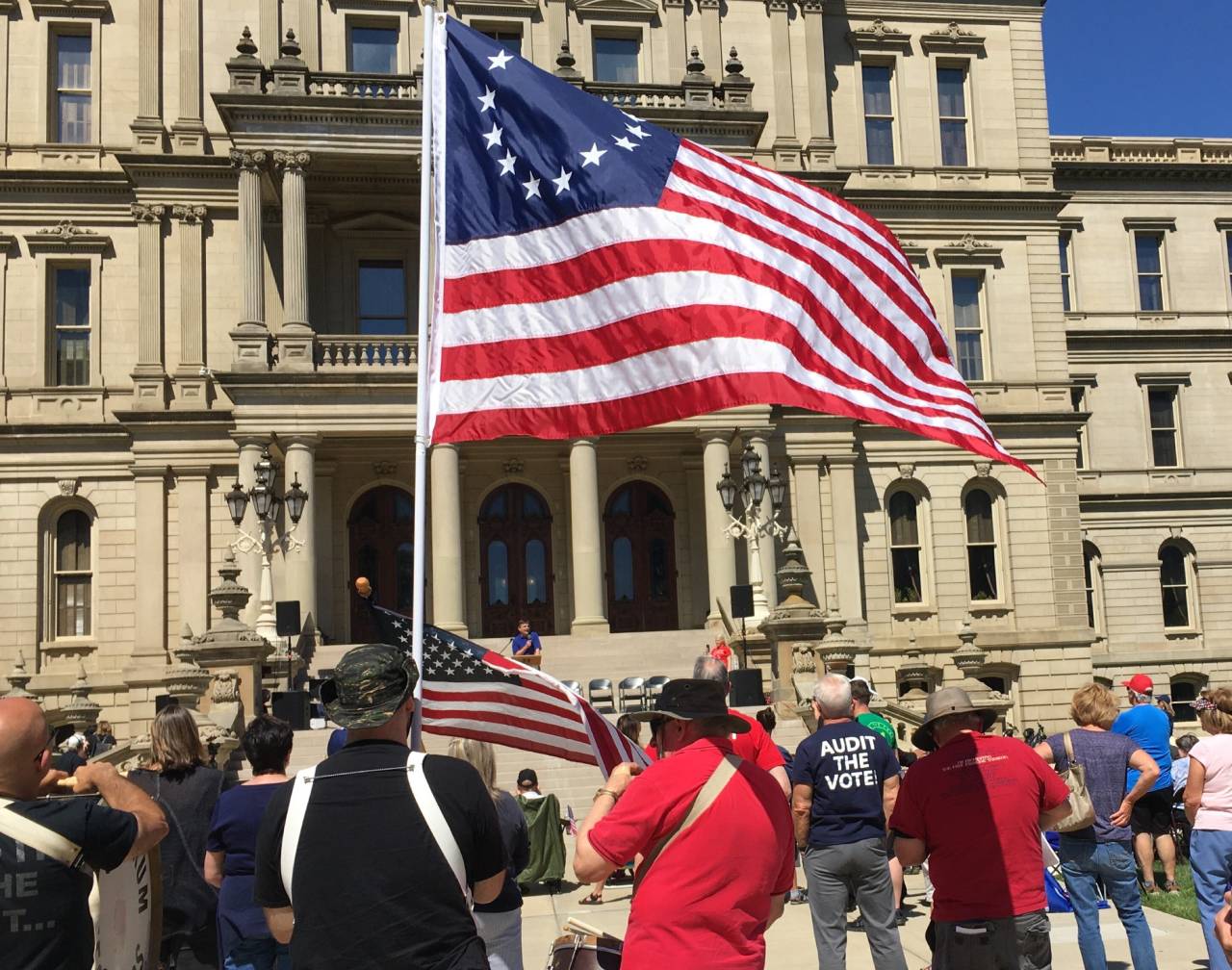 Less than a week after Michigan citizens delivered 9,000 affidavits to the Michigan State Legislature demanding a forensic audit of the 2020 election, a “Republican”-led Senate Oversight Committee rejected all claims of vote fraud (without hearing from a single person involved in documenting such fraud) and called for the Michigan Attorney General, a radical Democrat, to investigate lawyers and activists who are leading the fight for election integrity in the state.

Those Michigan officials were in lockstep with the New York State court which suspended the law license of President Trump’s lawyer, Rudy Giuliani because he wouldn’t shut up about vote fraud. Not to be out done, Michigan Congressman Peter Meijer, whose first significant act as a freshman Republican in 2021 was to vote for Donald Trump’s impeachment, tweeted, “Let me be clear: more people will die bc (because) of propaganda like this. People who believe election was a “coup” + view gov’t officials as traitors will seek what they view as ‘justice.’ When there are no arrests bc this is all a lie they will take matters into their own hands.” It remains to be seen whether Meijer is spouting nonsense, or he is in on a new false flag event.

The new “shock and awe” offensive is, in truth, a measure of the elites’ own growing desperation, as Mussolini Joe finds it increasingly difficult to legislate his fascist agenda. Blue-collar Michigan, the “Arsenal of Democracy,” is a bellwether in the battle for the Republic. In the span of one week, the uber-liberal Detroit Free Press and national publications like the Washington Post and Politico devoted extensive coverage to the Michigan political landscape and to the growing power of the Trump grass-roots forces in the state.

The only thing that these tactics have done is to shock people into greater recognition that the existing institutions, especially the Michigan Republican Party, are compromised or useless in the fight for the nation, and that it is up to patriots to organize and act.

On the Ground in Michigan

Even before the Senate Oversight Committee released its declaration of war on the Trump movement, an intense mobilization was underway On June 17, several hundred citizens rallied, as more than 9,000 notarized affidavits from Michigan citizens, demanding a forensic audit of the 2020 election, were delivered to elected officials at the Capitol in Lansing.  Or, to be precise, were delivered to the elected officials who would accept them. In an after-action conference call that evening, it was reported that Senate Republican Majority Leaders Mike Shirkey and House Oversight Committee Chairman Steve Johnson, nominally a Republican, refused to accept the affidavits. The Democratic coven which occupies the executive branch (Gov. Gretchen Whitmer, Attorney General Dana Nessel, Secretary State Jocelyn Benson) called security and had the delegation ushered out.

Days after the rally, Republican State Representative Steve Carra introduced House Bill 5091 to create a bipartisan audit board to be “tasked with contracting an impartial, nonpartisan corporation to conduct a forensic audit of the 2020 general election.”

LaRouchePAC organizers joined the spirited crowd outside the Capitol who rallied in support of a forensic audit, modeled on the just-completed Arizona audit, which was prompted by less than 200 affidavits from Arizona citizens. That Michigan Republican leaders have rejected this demand is not surprising. The so-called Republican Party in Michigan has invited former Vice President Mike Pence and former UN Ambassador Nikki Haley to address their fall conference. Maybe Liz Cheney’s invitation got lost in the mail.

This failure of the existing institutions has resulted in an unprecedented self-activation and self-organization of patriots in Michigan. The Michigan Election Integrity Network, formed earlier this year to coordinate efforts throughout the state, now has more than 90 groups participating, engaged in everything from drafting legislation, to training poll challengers, to examining poll books and absentee ballots. Scores of other groups, some statewide, some local, have sprung up in the wake of the stolen election.

So, rather than being intimidated by the June 23 “we are coming for you” Senate Oversight Committee report, leaders of the movement responded sharply.

Former State Senator and 2018 gubernatorial candidate Patrick Colbeck, who has been in the forefront of the Michigan vote fraud fight, stated in a June 23 press release, “Our elected officials have threatened us with a criminal investigation by the attorney general. This is how a banana republic operates, not our constitutional republic, we have a right to free speech, … we have a right to seek redress of our grievances.”

The grass-roots group, Rescue Michigan, also hit at the profoundly dangerous nature of the threat to prosecute lawyers, “This too is an unprecedented abuse of the public trust, and attempts to set a dangerous precedent that would impermissibly chill both free speech and the right of all citizens to counsel.”

President Trump himself denounced the Senate Committee report as “a coverup, and a method of getting out of a forensic audit for the examination of the Presidential contest,” and called for citizens to bombard the offices of Senate Majority Leader Shirkey and Committee Chairman McBroom with phone calls.

Throughout President Trump’s first term, LaRouchePAC organized with the sign, “Donald Can’t Do It Alone.” In the face of the escalating attacks since the November 3 election steal, that message has been internalized by tens of millions of Americans, who are now active in manifold ways, as is seen in the ballot integrity fight in Michigan, Arizona, Georgia, and elsewhere, and in the fight against Critical Race Theory, breaking out everywhere.

But, are we ready for the next fight? That was the headline of the LaRouchePAC leaflet circulated at the Lansing rally, which addressed the coming economic blowout of the global financial system. There was almost universal recognition that the existing financial system is doomed, and great interest in the solution, as outlined in the statement:

"The only question is, will we be ready to restore our economic sovereignty with the policies of the American System of Abraham Lincoln and Lyndon LaRouche, or will we allow the parasites to regroup, to maintain their monetarist policies (of both Keynesian and Friedmanite versions) and slam their Great Reset down our throats?

As Abraham Lincoln did, Lyndon LaRouche rediscovered and deepened the principles of the American System and devoted his life to equipping citizens with these very powerful weapons of national economic sovereignty. We must master these policies, and use them to take over the Republican Party, and turn it into the Party of Lincoln, LaRouche, and Donald Trump."

The full PDF statement is available here. As we fight the battles before us, use this to prepare our fellow citizens for the next fight.