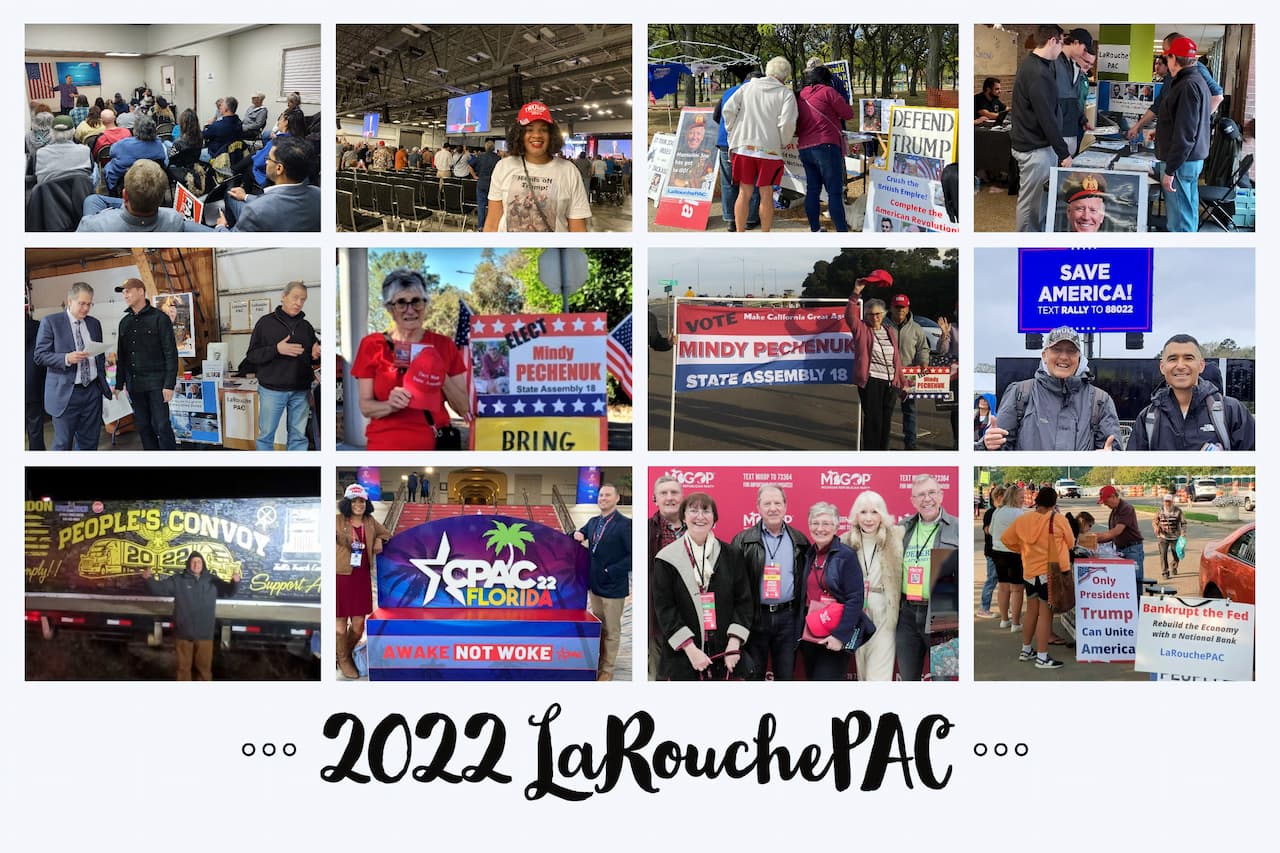 It is appropriate that we look to the battles ahead, before we review the highlights of our activity and accomplishments over the past 12 months.

The next two years will be politically shaped by the 2024 Presidential election. As we have continuously reported, the British imperium has sworn that it will prevent Donald Trump from ever winning the Presidency again and is intent on extinguishing the MAGA movement by any and all means. We, of course, have endorsed Trump. But it does not stop there. The Republican Party must be turned back into being the party of Lincoln and LaRouche, basing itself in the working and middle classes, and learn to fight with LaRouche’s wisdom and Trump’s ferocity if we are to win.  Our campaigns to replace the Federal Reserve with a National Bank and our newly launched Project Prometheus are exemplary of the ideas we are bringing into this fight; ideas which must become reality.

Our enemy, the enemy of mankind, the modern British financial empire, currently conducts a proxy war with Russia in Ukraine.  These utopians see conquest of Russia (which will not happen without a nuclear war) as a stepping stone to a new war with China.  They are criminally insane.  Meanwhile, they are systematically dismantling what is left of the U.S. economy while frontally assaulting the minds and bodies of our young people.  Their intent is to create an entirely compliant slave society with a vastly reduced population. It is Prince Charles’ Malthusian utopia realized, fittingly, through the fake idea that human beings (the species he and his allies hate) have catastrophically changed the “natural” climate.

On the human side, however, 2022 saw mankind respond to this nonsense by proving that fusion energy can be harnessed to power massive economic development throughout the world.  Sea water and similar materials will fuel it.  It will be so cheap that it will be a waste of funds to meter it.

That the fusion breakthrough was realized in the 100th anniversary year of Lyndon LaRouche’s birth was a fitting celebration of his belief in the power of human creativity. Fusion energy was a longstanding goal of Lyndon LaRouche, for which he campaigned fiercely throughout his life.

Moreover, as we found in 2022 wherever we went, the citizens of this country, particularly young people, are on to the oligarchs and globalists who would enslave them. They are hungry for Lyndon LaRouche’s ideas and perspectives about the British imperial enemy and how they can be defeated.  They are hungry and ready for the ideas by which we can create a new American economic revolution. We are only limited by the financial means we can bring to this engagement.  You will see this when you review what we did in 2022 below.  We are extremely active and we are growing but the task requires that we do this by leaps and bounds.

These past 12 months have seen an extraordinary development of the MAGA grass-roots movement which has become more and more conscious of its responsibility to function as true citizen-leaders and to act to save our Republic.  We spent 2022 attacking the moribund establishment Republican Party and its globalist sponsors by exposing them and bringing Lyndon LaRouche’s ideas for a new American System rooted economic renaissance to the forefront.

LaRouchePAC organizers traveled to 12 Trump rallies throughout the country, from Arizona to South Carolina (including 2 each in Texas, Michigan, Ohio, and Pennsylvania) distributing tens of thousands of leaflets, and signing up thousands of activists to stay in touch. At every rally, attendees would remark that we were the only people there presenting policies and ideas. 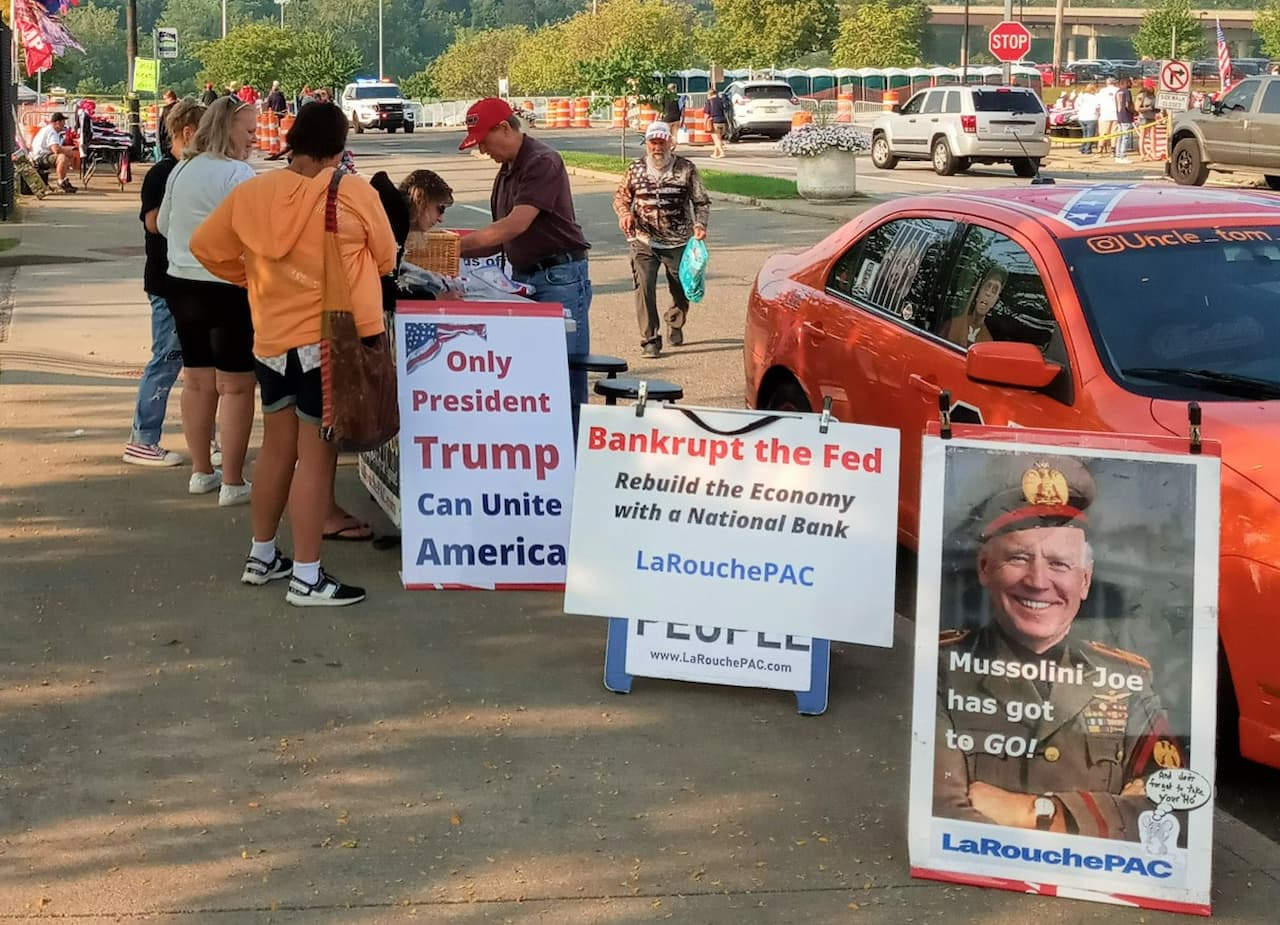 Rally attendees signing up LaRouchePAC tables in Ohio and Michigan. 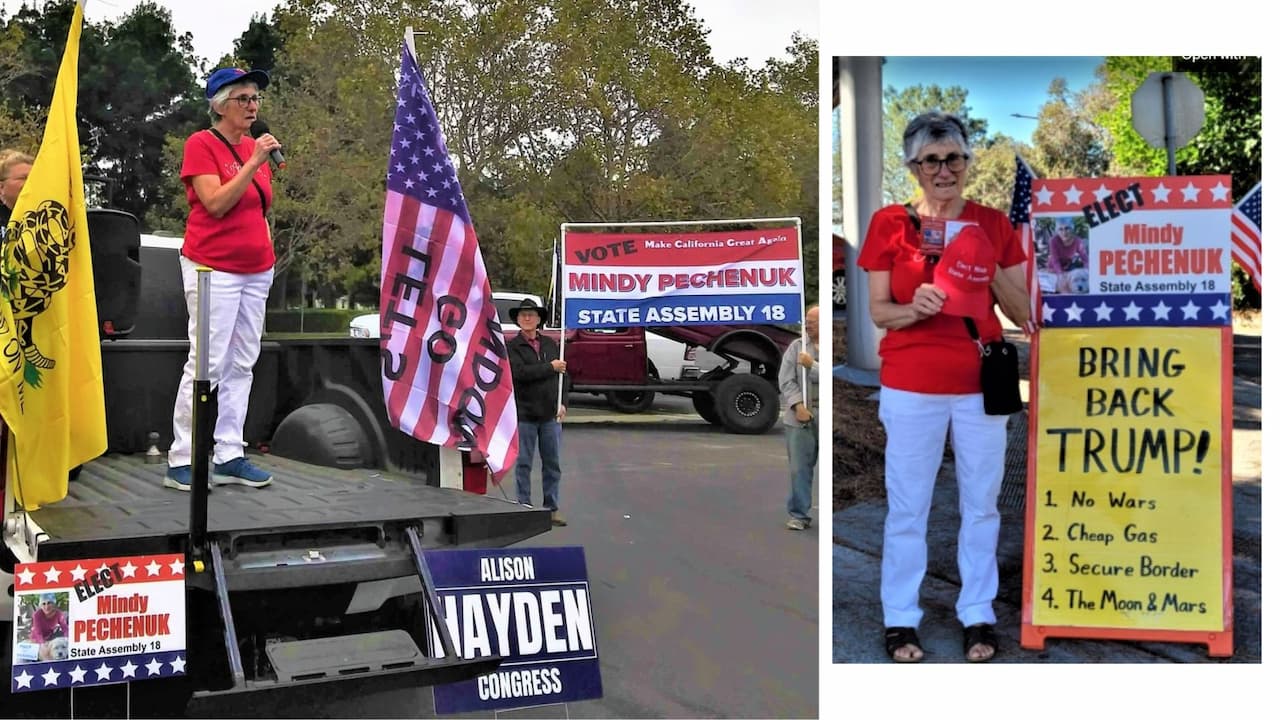 Mindy Pechenuk, Republican candidate for California State Assembly 18, organized in all communities in her district. No matter where the campaign went, there was a great openness to the need for new leadership and to end the reign of the uni-party. 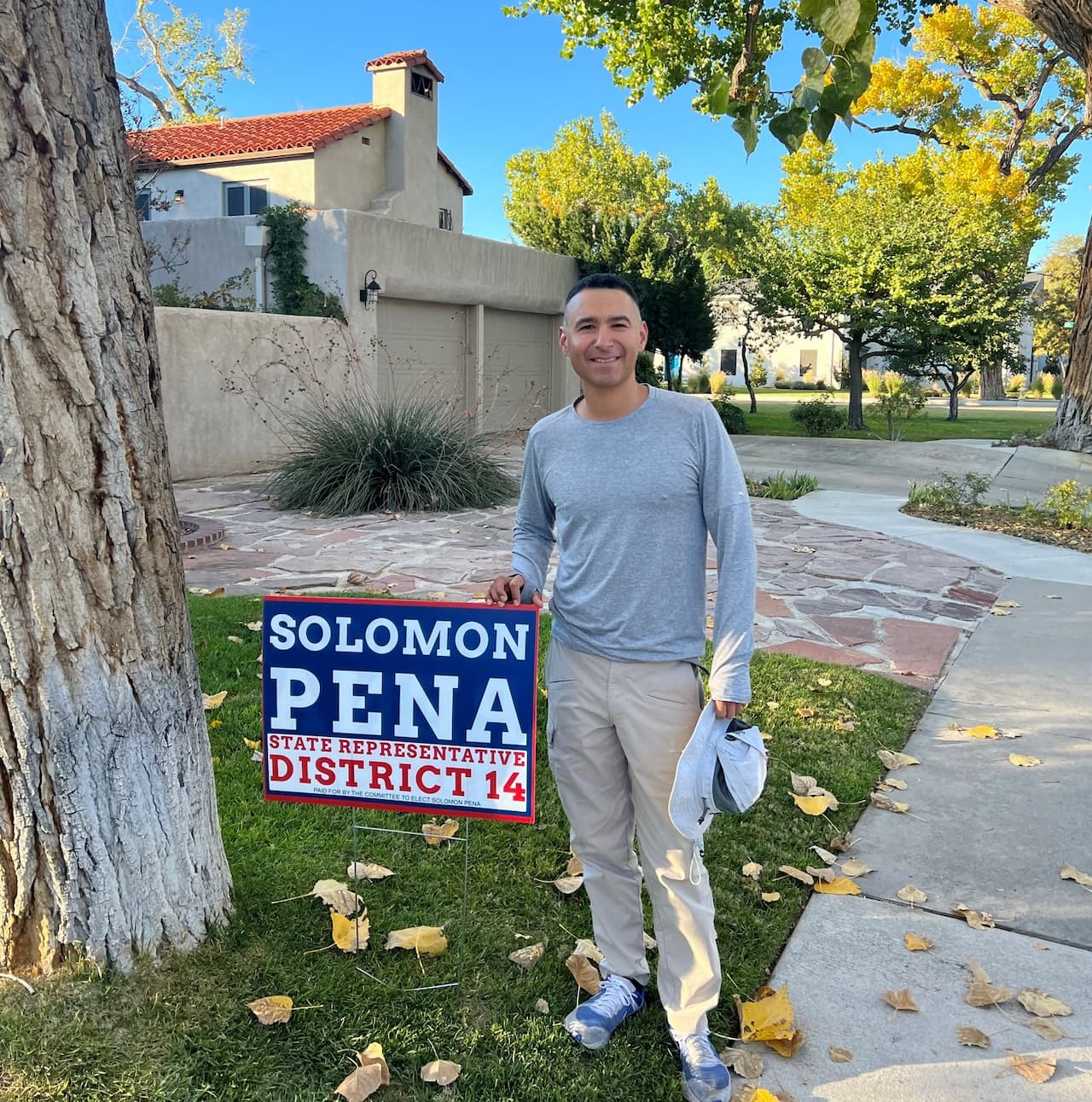 Solomon Pena was the Republican candidate for State Representative in New Mexico’s District 14, and brought LaRouchePAC’s policies to Republicans and Democrats alike, as well as traveling to Trump rallies around the country to spread the word. 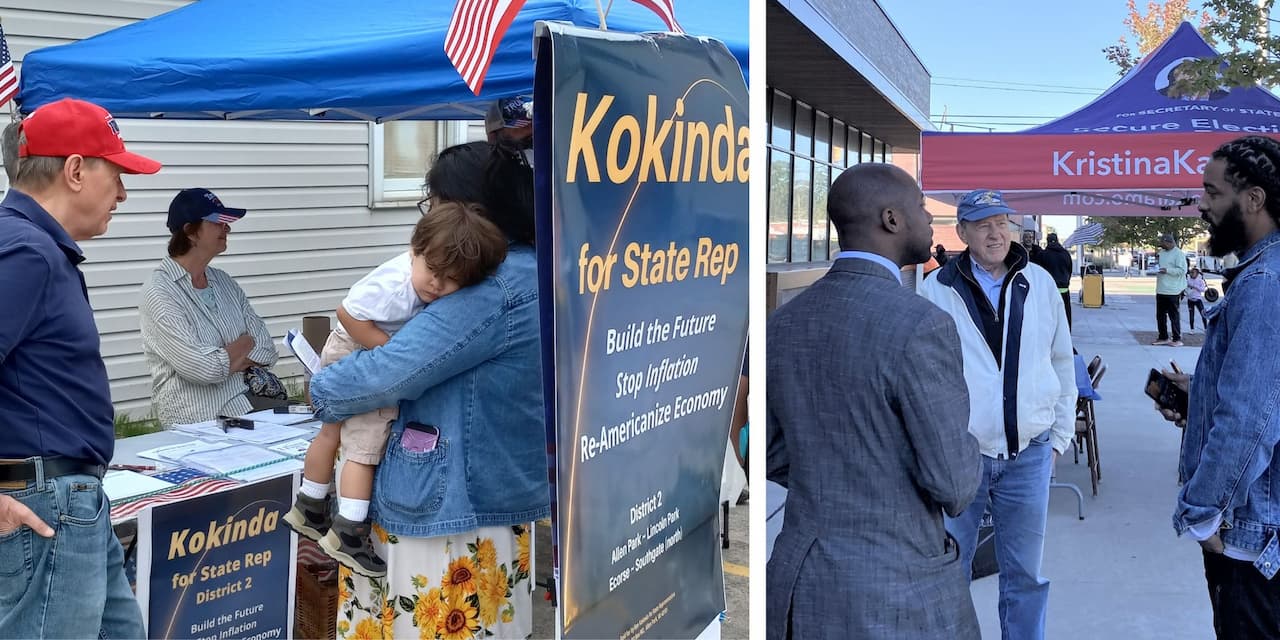 Ron Kokinda ran for State Representative in the Republican primary in the blue-collar communities of Michigan’s House District 2 and found tremendous support for LaRouchePAC’s campaign against the Federal Reserve from voters in both parties. Kokinda campaigning, and with Republican Congressional Candidate Martell Bivings (right)

Paul Glumaz ran for Congress in Seattle, WA, 7CD,  and now serves on the State Executive Committee of the Republican Party.

CAMPAIGN TO ABOLISH FED AND ESTABLISH A NATIONAL BANK

Our Texas team brought our resolution to end the Fed and establish a National Bank to the Texas Republican Party, securing the support of the Harris County Republican Executive Committee. Kesha Rogers led our team to the State Convention, where they organized for including that plank in the State GOP platform. The section on abolishing the Fed was adopted. 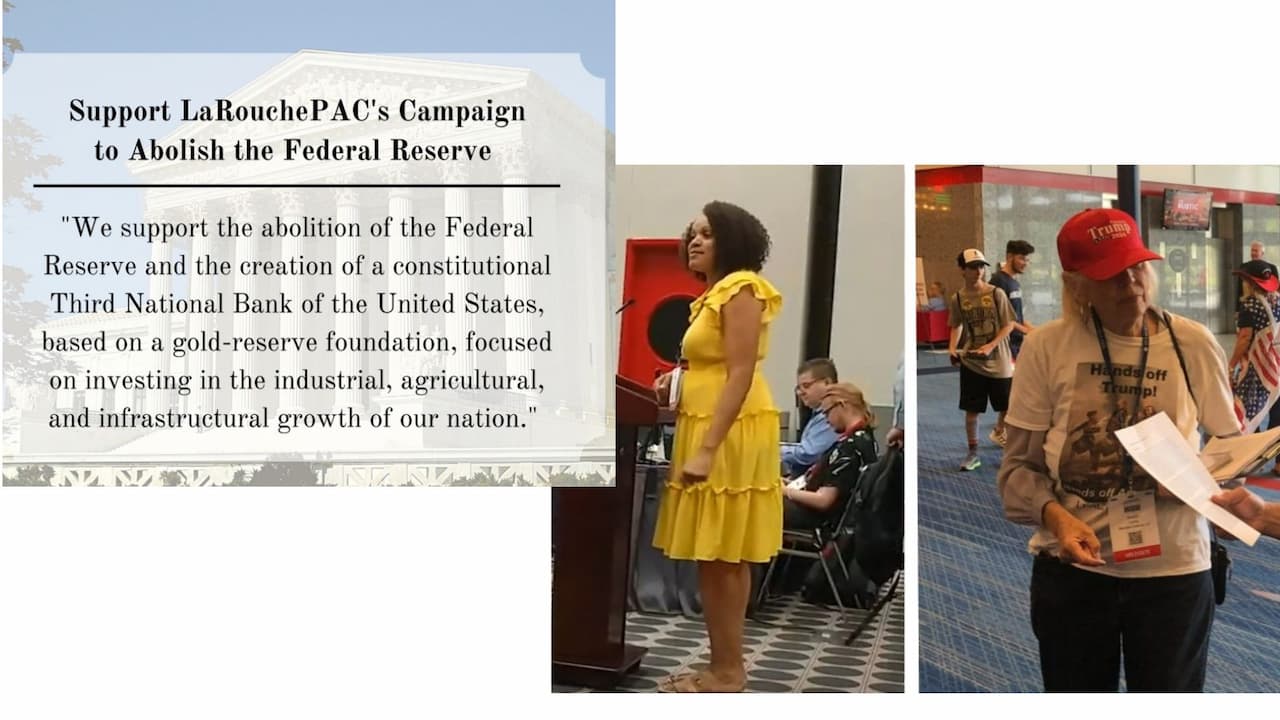 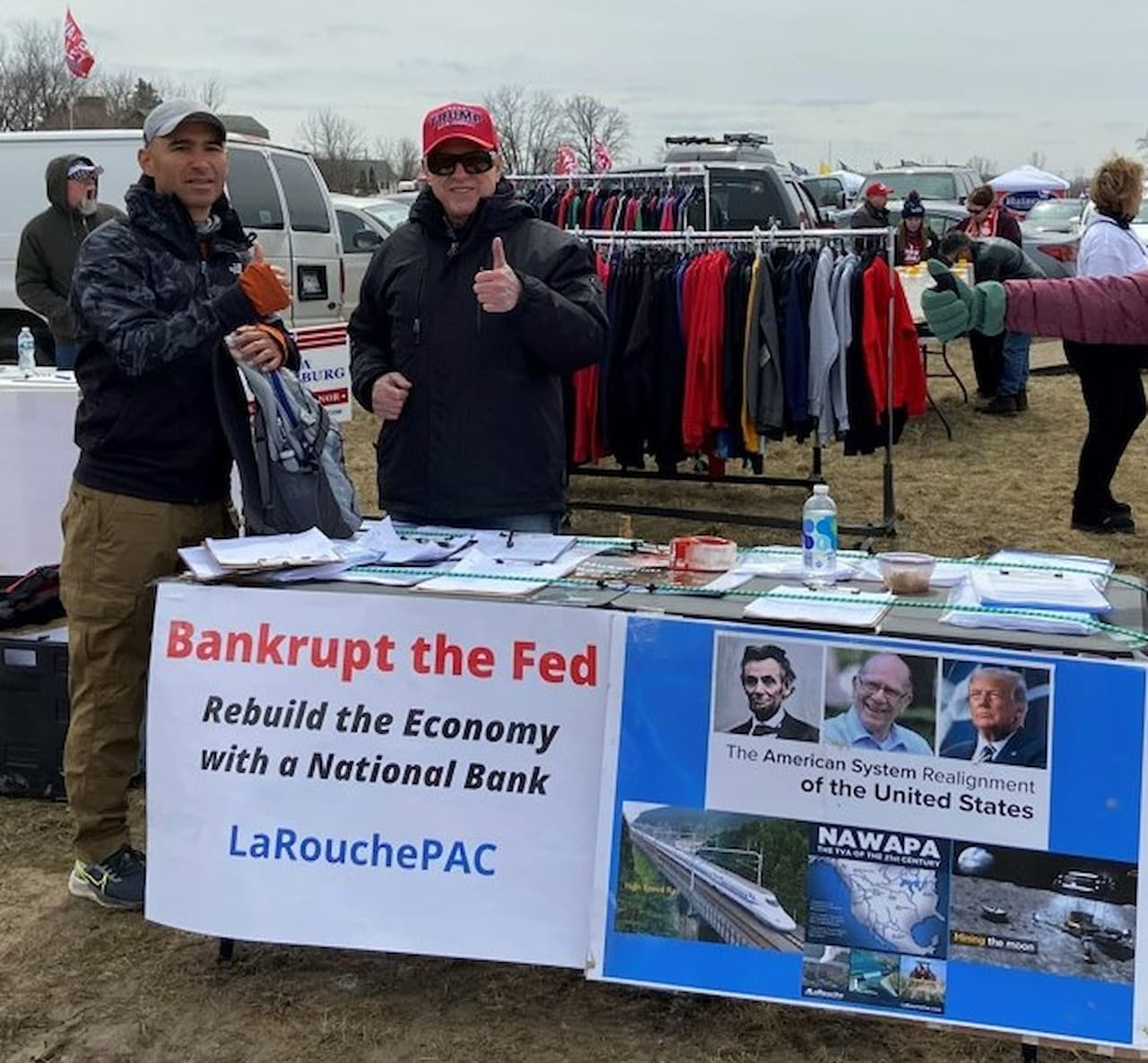 We brought the fight for a National Bank to every Trump rally and event which we attended. 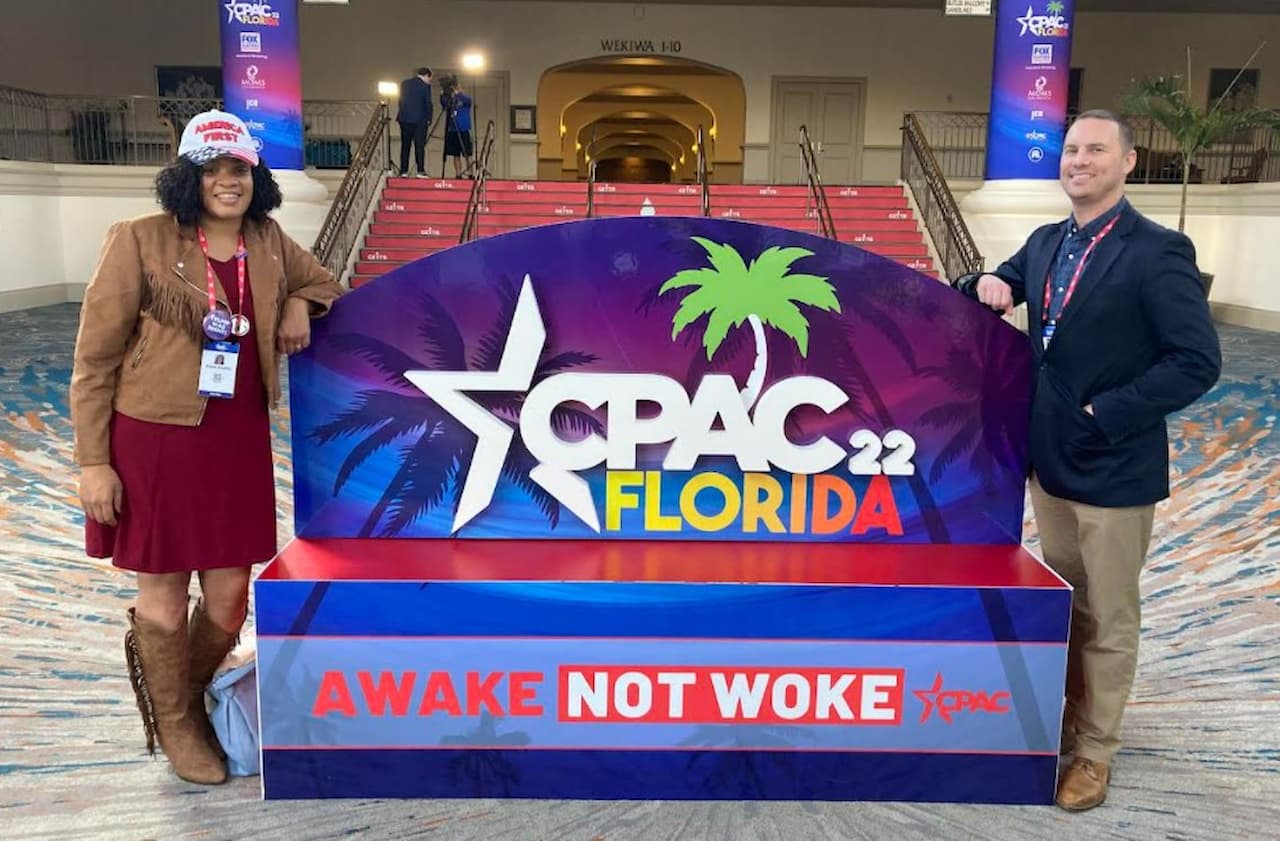 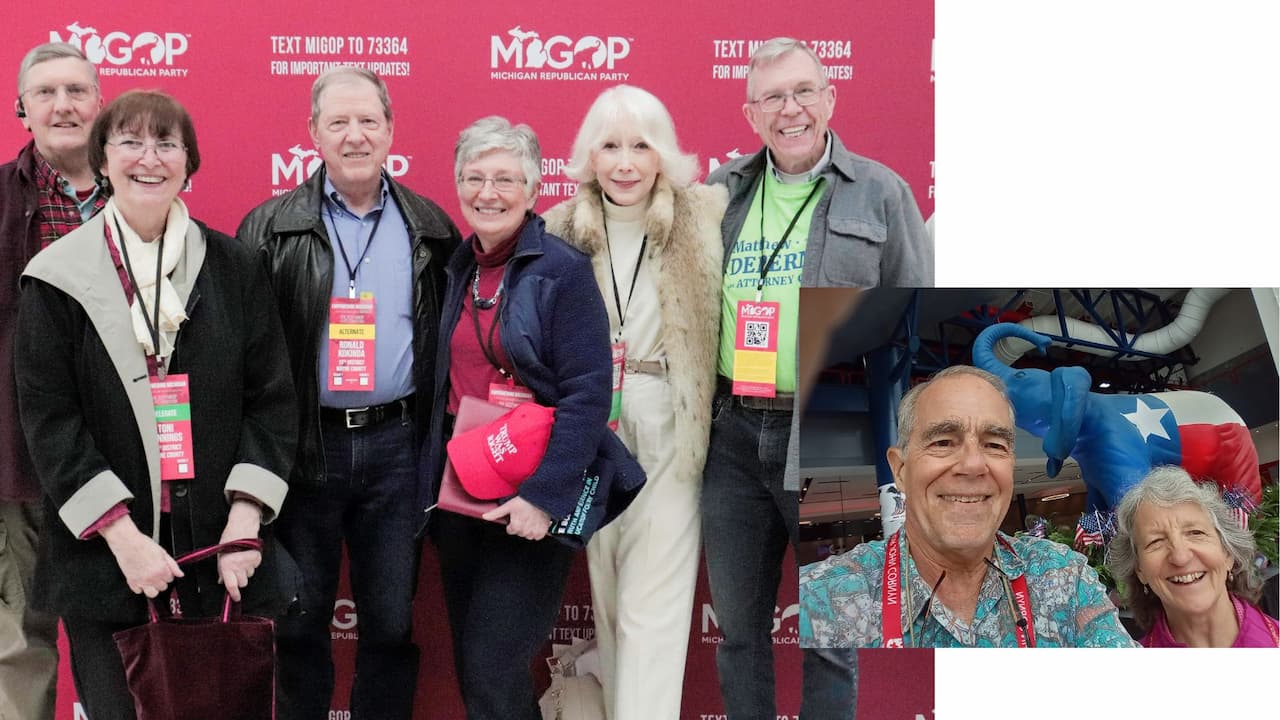 LaRouchePAC organizers were delegates to the Michigan and Texas State Republican Conventions. 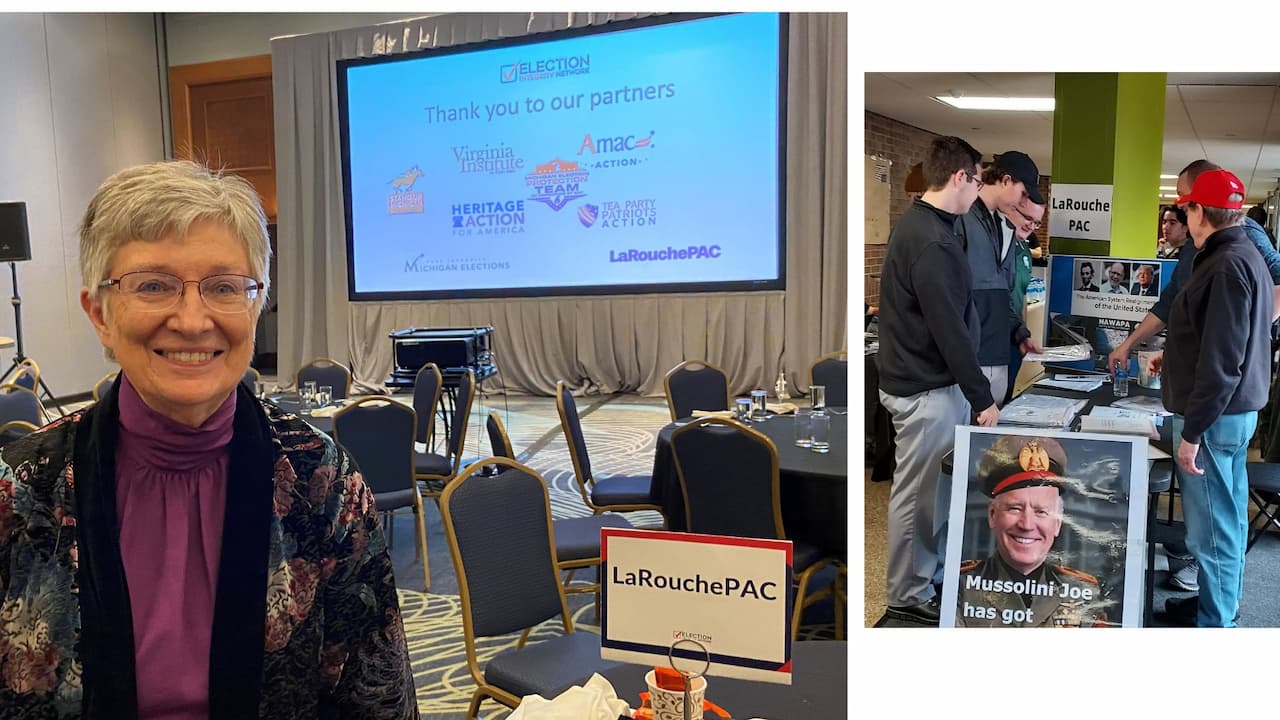 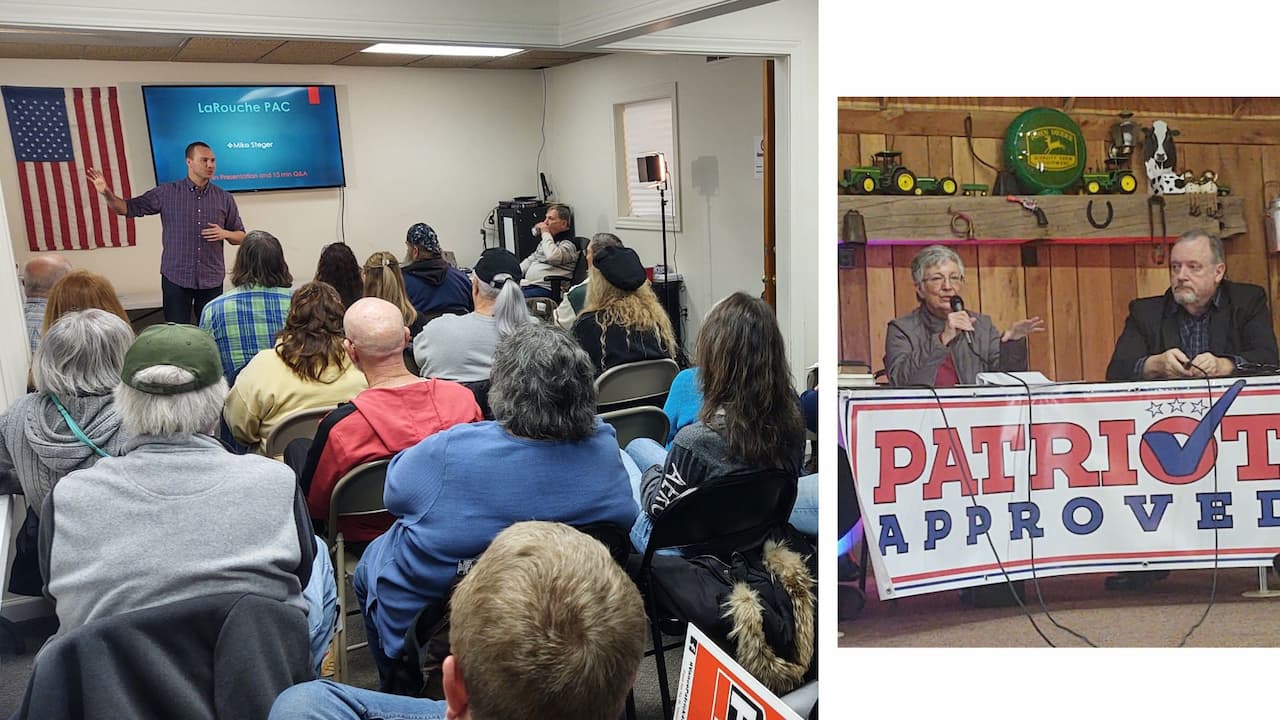 LaRouchePAC conducted over 100 live zoom discussions, engaging our national movement of activists in dialogue covering history, strategy, science, economics and culture. Between the live participation and subsequent YouTube viewership, tens of thousands of people have been organized and educated. 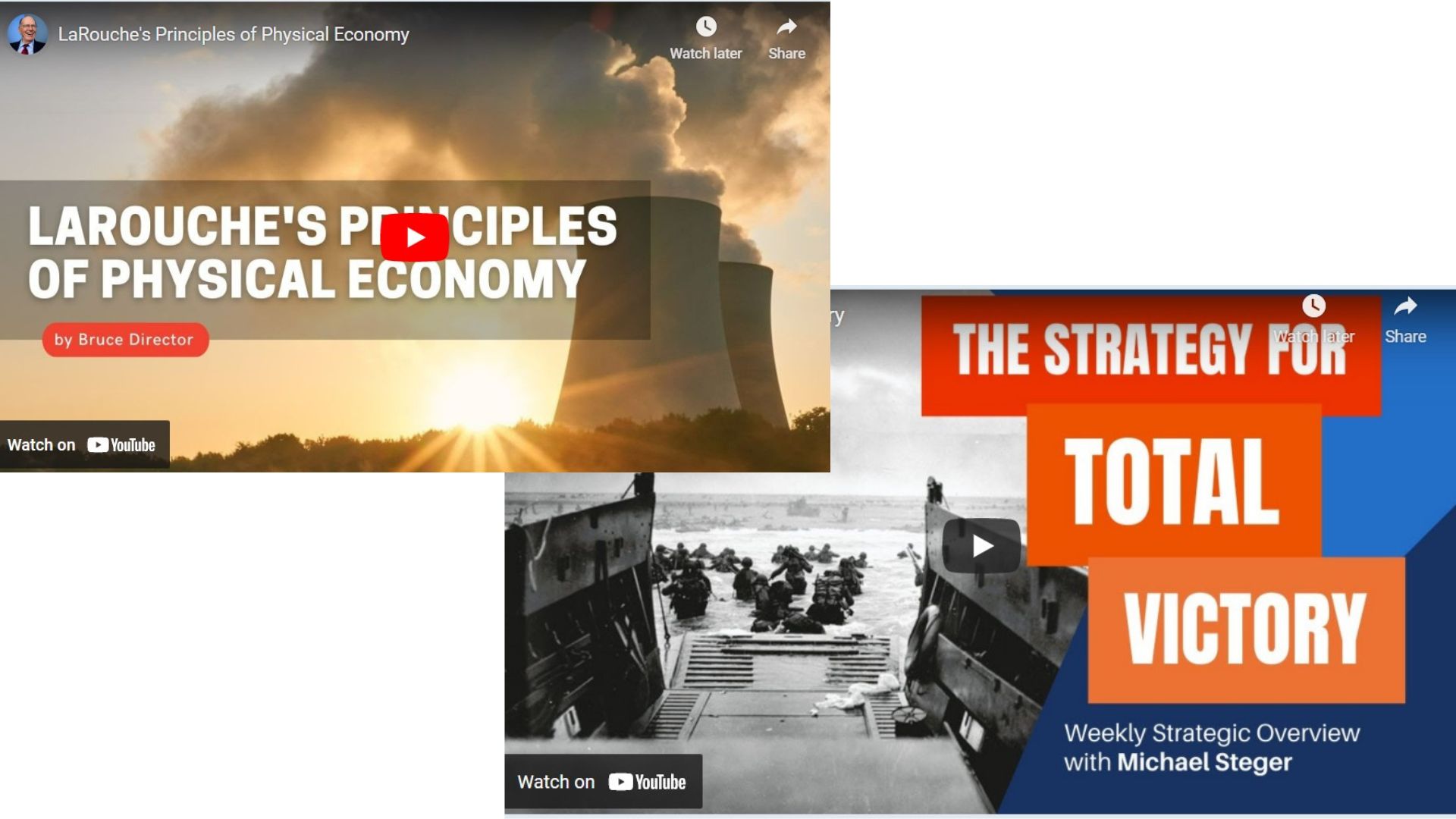 As we ring in the new year, 2023, we hope you will consider making a donation to LaRouche PAC to help us continue the important work we do. Your support is crucial to our success, and we are grateful for any contribution you can make to help us achieve our goals in the coming year.

Thank you for your support!