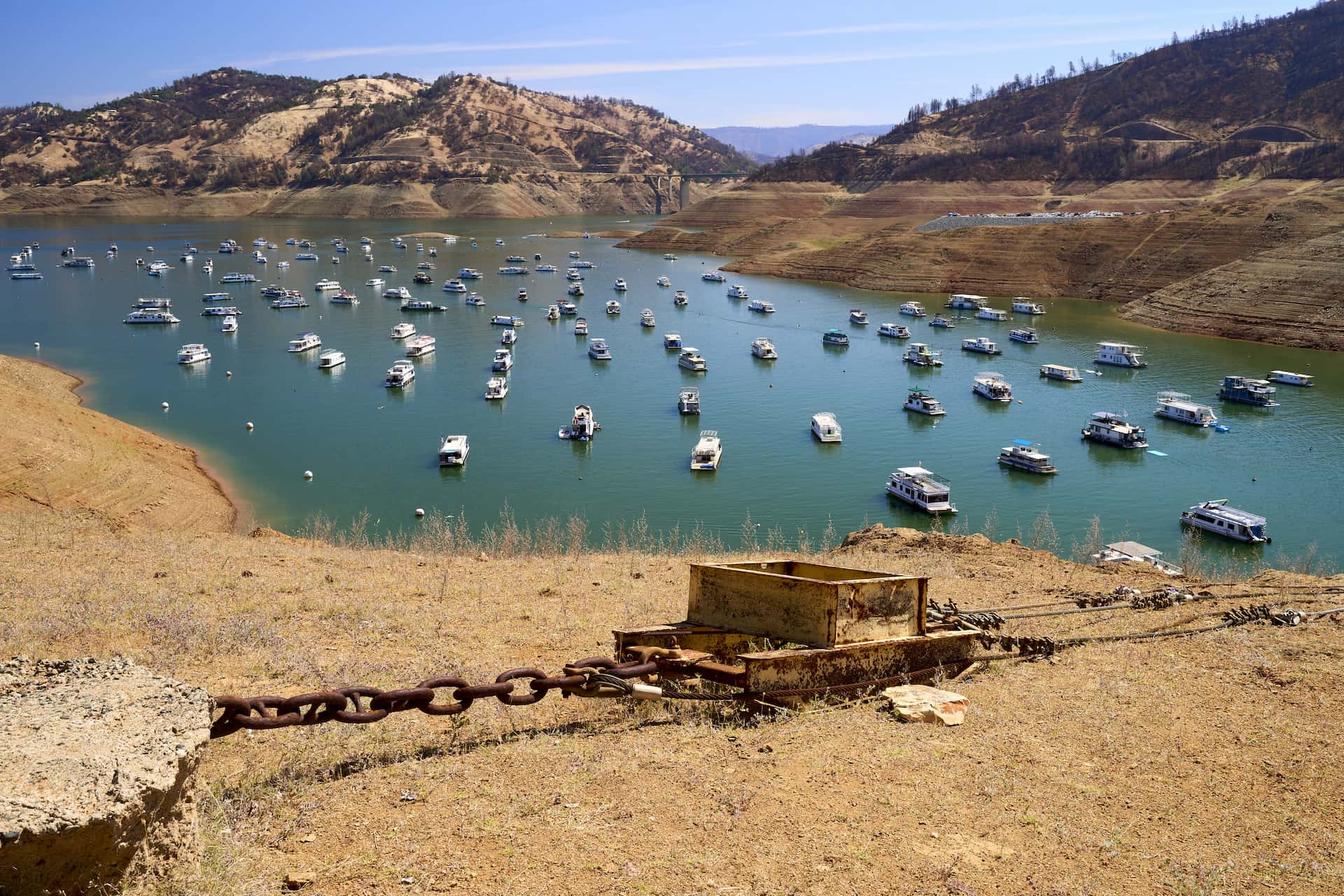 Lake Oroville on the morning of Memorial Day 2021. Water levels of Lake Oroville dropped to 38% of capacity. The boats are dwarfed by the exposed bank... Photo: wikiphotographer / flickr / CC BY-SA 2.0

In an about-face, California’s governor now wants to keep the last nuclear plant in the state open, and promotes the approval for a new, large desalination plant.

On April 28, Governor Gavin Newsom of California, in an interview with the Los Angeles Times, said that he may back off from his long campaign to close the Diablo Canyon nuclear plant by 2025.

The very next day, Newsom urged the California Coastal Commission to override its staff’s recommendation to block the building of a 50-million-gallons-per-day desalination plant at Huntington Beach, California.  The fate of this plant will be determined on May 12th.

Maybe Newsom realizes that his presidential ambitions will be dead in the water if he allows more blackouts and brownouts due to California’s failing electrical grid, at the same time that water is being denied to agriculture (and everyone else) in the midst of a devastating drought. Both situations—which now threaten to wreck the most productive food-producing region in the world—are the result of years of neglect of fundamental infrastructure and Newsom’s wholesale embrace of the same radical environmentalism embraced by his predecessor, Jerry Brown.

With California growing one-third of the nation’s vegetables and more than half of the nation's fruits and nuts, Newsom may be bailing to dodge the blame for coming food shortages—a process  otherwise fully underway as the result of the Biden Administration’s policies and those of the Federal Reserve in conjunction with the oligarchy’s other central banks. Both Biden and the central banks are instruments of the modern British Empire, which is now driving to implement its Great Reset and Green New Deal population reduction schemes through provoked wars, famines, and disease.

Almost a decade ago, Pacific Gas and Electric (PG&E), the nation's largest privately owned utility, in consultation with then California Governor Jerry Brown, announced that it would shut down Diablo Canyon—the last nuclear power plant in the state. Driven by the company’s eye on its shareholder interest, rather than its customers, PG&E claimed that a demand by state and federal regulators to strengthen Diablo’s ability to withstand a non-existent seismic fault was cost prohibitive.

Now, 2025 is three years into the future, but in order to relicense the plant, decisions have to be made years beforehand. So, while PG&E may think they are locked into the decision, political reality can damn well change that company's absurd policy.

You see, the Diablo nuclear reactors provide 10 percent of the electricity generated in California where blackouts during heat waves loom as a permanent phenomenon. In 2020, hundreds of thousands of homes and businesses experienced blackouts for several hours during one heat wave, and nearly suffered a second round of blackouts a few weeks later. All forecasts warn that this coming summer will see more.

Replacing Diablo Canyon with windmills and solar panels will require 90,000 acres of land, a set-aside even California’s insane environmentalists could find extreme. Further, in a wet year, California receives about 20% of its electricity from hydropower. Now, in the throes of the years-long drought, that power may be reduced by 50% or more by the end of the summer.

Over the last decade, as California's commitment to “clean energy” has shut down coal and natural gas generating plants, even an aggressive, and subsidized, building of solar and wind fields, has not been enough to replace the baseload power production that coal and natural gas provided. And with California’s commitment to be 100% reliant on “renewable” sources by 2035, the shortfall in electricity production will only grow larger. In 2035, no internal combustion vehicles will be allowed to be sold in the state. So, demand for electricity will far outstrip supply—guaranteeing even wider brownouts, blackouts, and electricity rationing.

In Newsom’s interview with the Los Angeles Times, he even mentions that he has consulted with scientists, former Energy Secretaries, and others who recommended to him that Diablo Canyon not be shut down. A study last year by MIT and Stanford recommends not only that Diablo Canyon should remain open, but should be repurposed by adding another nuclear plant to produce even more electricity to desalinate sea water and produce hydrogen. In fact, as current California independent candidate for Governor, Michael Shellenberger, has documented, the original design for the Diablo Canyon facility saw the building of six plants on the site. As for the much ballyhooed public opposition to nuclear power, (California being the birthplace of the anti-nuclear movement) a recent poll in the state found that 44 percent favor nuclear power, while only 37 percent oppose it. Nationally, the favorable view is over 50 percent now.

California has one operating large desalination plant at Carlsbad in San Diego County that opened in 2015, and which produces 50 million gallons of potable water daily and today provides the county with 10 percent of its water supply. The proposed Huntington Beach facility is, like the San Diego plant, another Poseidon Company project that has been going through environmentalist delays and bureaucratic hurdles for 20 years. The May 12 decision is the last hurdle, and if the company gets the go-ahead, construction can begin this year.

Governor Newsom, almost echoing the company’s view that disapproval would kill all desalination in California forever, said not approving the plant would be “a big mistake, a big setback.” To his credit, and with an obvious focus on his own political future, he cited the drought as the reason why the plant should be built, saying, as quoted in the Mercury News on April 29, “We are as dumb as we want to be. What more evidence do you need that you need to have more tools in the tool kit than what we've experienced? Seven out of the last 10 years have been severe drought.”

Of course, those who view themselves as the protectors of plankton and other such species, instead of human beings, have been out in force to oppose the plant. They claim that the lower species will be harmed by the discharge of brine from the plant. “Social Justice” concerns also, of course, come in here, as they claim that the increase of the cost of water per household will be as much as $5 per month, which will punish poor and minority families. That is a devastating increase of about 14 cents per day per household. Those same professional-eco-poverty pimps, of course, think nothing of spending $5 for a cup of cappuccino.

These minimal steps toward survival could turn into a stampede for prosperity and growth if the proposals for ensuring water and energy security from the Kennedy Administration are studied and modernized now. President Kennedy established a department to promote and build large-scale, nuclear-powered desalination plants throughout the country, beginning in California, Texas, and Florida. Even after he was assassinated, the federal Atomic Energy Commission signed a contract with the Metropolitan Water District of Southern California in 1964 to build the first facility at Huntington Beach, California, near the same site that the present proposed Poseidon plant is to be built today.

What happened to that project? Even with Federal support, and numerous supporters in Congress, the rise of environmentalism shifted U.S. policy steadily away from production, new and revolutionary infrastructure projects, and even the space program. Environmentalism tied to Malthusian zero population growth—the preferred ideology of the modern British Empire—reigned as the formerly productive industrial and technologically progressive economy was turned into a monetarist gambling casino.

LaRouche PAC has campaigned, and will continue to campaign, not only to revive Kennedy’s policies, but to now go beyond them. Dozens of nuclear-powered desalination plants are now needed in California as a short-term means to alleviate some effects of the worst drought to hit the Western states in 1,200 years. This requires that the California law that prohibits new nuclear plants now be repealed.

Here is a link to my history of this project: “Nuclear-Powered Desalination in California—Parts I-IV”

A second project of the Kennedy era is the proposal that would have created an integrated North American continental water management system. That project, the North American Water and Power Alliance (NAWAPA), was proposed and detailed by the Parsons Engineering company of Pasadena, California. It would begin in Alaska and northern Canada to bring 100 million acre feet of water south to the Prairie provinces of Canada and then to the U.S. There it would divide into two branches, with one going to the Midwest to provide water to the Ogallala Aquifer, and the other to the Southwestern states, and on to Mexico.

This also had strong Congressional support, including from Senator Robert Kennedy and Utah Senator Frank Moss. But, by the mid-1970s, like the nuclear-powered desalination policy, it faded too.

LaRouche PAC has also campaigned for a revival of this project. Here is a short video illustrating the type of approach needed now not only to alleviate the California drought, but the drought now impacting the entire western United States.