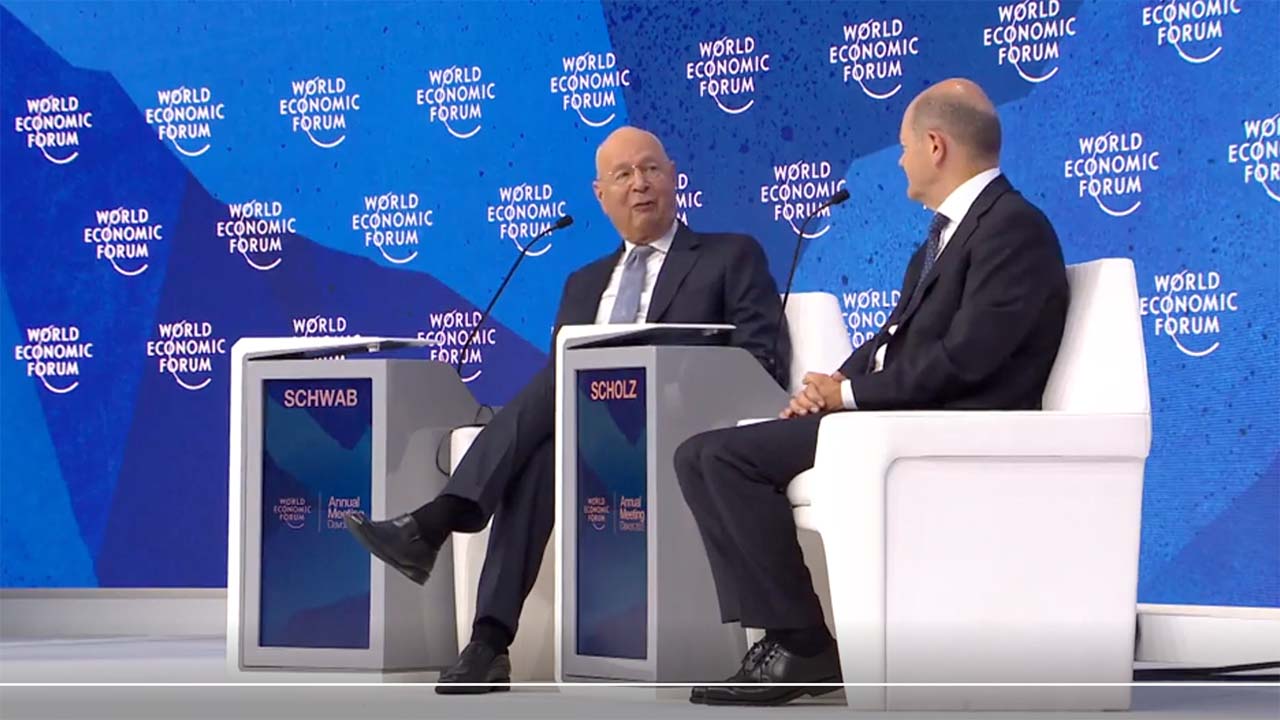 The World Economic Forum gatherings at Davos, Switzerland have long been infamous for their billionaire participants and lavish parties. Delegates gather in self-adulation, reminiscent of an endless summer of love for the über-wealthy, to remind the rest of us how brilliant they are, and how they will guide the world to a better future. Comity and civility are the order of the day. The Gods speak! And the helots must heed every word.

Gone, now, is that haughtiness. Russia's Special Military Operation in the Ukraine, the escalating breakdown of the global economy and the continuing effects of the world-wide Covid lockdowns have ruined the mood, and one suspects that it will not be long before the passengers begin to trample over one another in a rush to get to the lifeboats and off the doomed ship which they conceived and built.

Yes, the “Climate Change” lunacy is still being pushed, with the latest fad being “blue foods” and “blue carbon,” and the digital police state remains a desired goal, but reality has intervened, as in the inevitability of E.A. Poe’s “Red Death.”  This year’s conference was a startling departure from the past.

Representative Panel Discussions included: “Return to War;” “Russia: What Next?” “War is Not the Answer”; “The Geopolitical Outlook”; “Cold War 2.0”; and “NATO in the Nordics.”  In his opening remarks, Klaus Schwab stated that the top issue of the conference was the war in the Ukraine, and that “Russia’s aggression on their country will be seen in future history books as the breakdown of the post-World War II and post-Cold War order.”

Ukrainian President Volodymyr Zelensky spoke on the first day of the Conference, calling, as always, for “maximum sanctions” against Russia and an escalation of the war. His delegation included the Foreign Minister, two Deputy Prime Ministers, five parliamentarians and the mayor of Kyiv, Vitali Klitschko. These Ukrainian officials participated in several featured events, including a panel “Spirit of Resilience: Ukrainian Voices;” a “Conversation with Dmytro Kuleba,” Minister of Foreign Affairs of Ukraine; and a dialogue: “Kyiv after the Onslaught,” featuring Vitali Klitschko, Mayor of Kyiv.

In the past, a facade of inclusiveness, beneficence and cooperation was carefully cultivated by WEF boss Klaus Schwab. But that facade now lies in tatters in a small town in Switzerland. The Russia House, which had been the base for the Russian delegation at Davos for years, has been seized by the foundation of Ukrainian oligarch and Clinton Foundation megadonor Viktor Pinchuk, and converted into the “Russia War Crimes House.”  The venue will now play host to an exhibition documenting alleged war crimes committed by Russian troops. This year, neither Vladimir Putin, nor any other Russian officials or business executives attended. It is also revealing that this year’s event is minus the appearance of any top tier world leader. In past years, almost every conference witnessed a featured presentation from one or more of the leaders of Russia, the United States, China, Britain, India, or France. This year diplomatic representation has been relegated to lower-level officials, or to second and third tier nations.

The European Union remains, perhaps for now, the most reluctant to abandon the WEF paradigm. Although neither Boris Johnson of the UK, nor Emmanuel Macron of France attended, European Commission President Ursula von der Leyen delivered a feature presentation, and other speeches were given by Jens Stoltenberg, Secretary-General, North Atlantic Treaty Organization and German Chancellor Olaf Scholz.

Ursula von der Leyen begins her speech with the usual lying imperial script: “It is difficult to believe that in Davos today we talk of war. . .. (but) we must address the costs and consequences of Putin’s war of choice. The playbook of Russia’s aggression against Ukraine comes straight out of another century. . .  This is not just a matter of Ukraine’s survival. It is not only an issue of European security. This is putting our whole international order into question.”

After crowing about Europe’s success in “punishing” Putin, she admits the obvious, “This conflict is sending shockwaves throughout the world, further disrupting supply chains already stretched by the pandemic. It is putting new burdens on businesses and households, and it has created a thick fog of uncertainty for investors across the globe. And more and more countries and companies, already battered by two years of COVID-19 and all the resulting supply-chain issues, must now cope with rising prices for energy as a direct result of Putin's unpardonable war. . .. The signs of a growing food crisis are obvious. We have to act urgently.”

Fear and Loathing on the Economic Front

Amid the non-appearance of several major players (Janet Yellen, Jerome Powell, and JPMorgan Chase’s Jamie Dimon, among others, did not attend), the mood of the financial/banking representatives was utter gloom. Klaus Schwab set the tone by stating, “The return of war, epidemics and the climate crisis, all those disruptive forces have derailed the global recovery.”  Other participants were equally pessimistic in their assessment of the world economy, with Jane Fraser, the CEO of CitiGroup stating that she was positive that Europe is headed for a recession. Harvard economist Jason Furman opined that there is only a 25 percent chance that galloping inflation can be reversed.

Leaders from a number of developing nations were more reality driven, as their nations face catastrophe. UAE Minister Mariam Almheiri stated that “We cannot fix the global hunger issues without fixing global food systems,” and Indian Oil Minister Hardeep Singh Puri warned “If oil stays at $110/barrel, then we are looking at bigger threats than inflation.”  Exactly what Puri warns of can be seen in the massive anti-government demonstrations now sweeping Sri Lanka, as the people are confronted with a reality of no petrol, no food, no money, and the insane rising cost of goods.

One Panel Discussion, “Global Economic Outlook,” featured apparent escapees from Madame Tussaud’s Museum,— namely Kristalina Georgieva (Managing Director of the International Monetary Fund), Jane Fraser (CEO of CitiGroup), François Villeroy de Galhau (Governor of the Bank of France) and David M. Rubenstein (billionaire co-founder of the private equity firm The Carlyle Group)—and they struggled for an hour to put a brave face on things, but in the end their conversation petered out as Ms. Georgieva asked “How many more unthinkables are going to come?”

Crisis Management or a Solution?

It is no wonder that many observers, including from both the “right” and “left” are now pointing to the self-serving greed of Klaus Schwab’s con-game. Since the inauguration of Joe Biden, billionaires have added $5 trillion to their fortunes, and the world's richest ten men saw their collective wealth more than double. These are the elite, and their flunkies, who gather every year at Davos. Overwhelmingly, the participants at this year’s gathering were not government officials but representatives of banks, financial firms, private wealth funds, and top leadership of the largest and wealthiest “multinational” corporations.

One theme which surfaced at Davos this year was the urgent need for “Crisis Management.”  One panel, “Bolstering the World's Crisis-Management Capacity,” featured Gillian R. Tett (chair of the editorial board at the London Financial Times) and Anne-Marie Slaughter (the Director of Policy Planning for the U.S. State Department from January 2009 until February 2011 under U.S. Secretary of State Hillary Clinton). Another panel was titled, “Leadership in an Era of Rolling Crises.”  Clearly, the way in which governments and supra-national agencies have handled the Covid pandemic has given these parasites a model to build on as the crisis deepens.

But this is not our future.

The regal confidence, the “bounce in the step,” has vanished from Davos. The trepidation is palpable. The oligarchical suzerain has lost control over its subjects, and the financial empire, built on usury and speculation, is crashing. Delegates to the Davos conference might still genuflect to “net-zero” carbon emission, but at home their governments are signing deals to build new coal, natural gas, and nuclear power plants. Food shortages, water shortages and mass unemployment and under-employment now define the agendas of almost every nation on earth. Reality has reasserted itself.

LaRouche PAC’s campaign to restore Constitutional National Banking is intersecting a groundswell of calls to abolish the Federal Reserve. Increasingly, the demand is heard, growing into a chorus, to rebuild the nation and eliminate the financial parasites. That is the future. Perhaps the skeletons of Schwab and his confidants will be preserved in some future museum as examples of Homo Horribilis —as a lesson for future generations.

LaRouchePAC is launching a short class series devoted to equipping citizens, elected officials, and emerging leaders with the ideas needed to rescue our disintegrating economy.