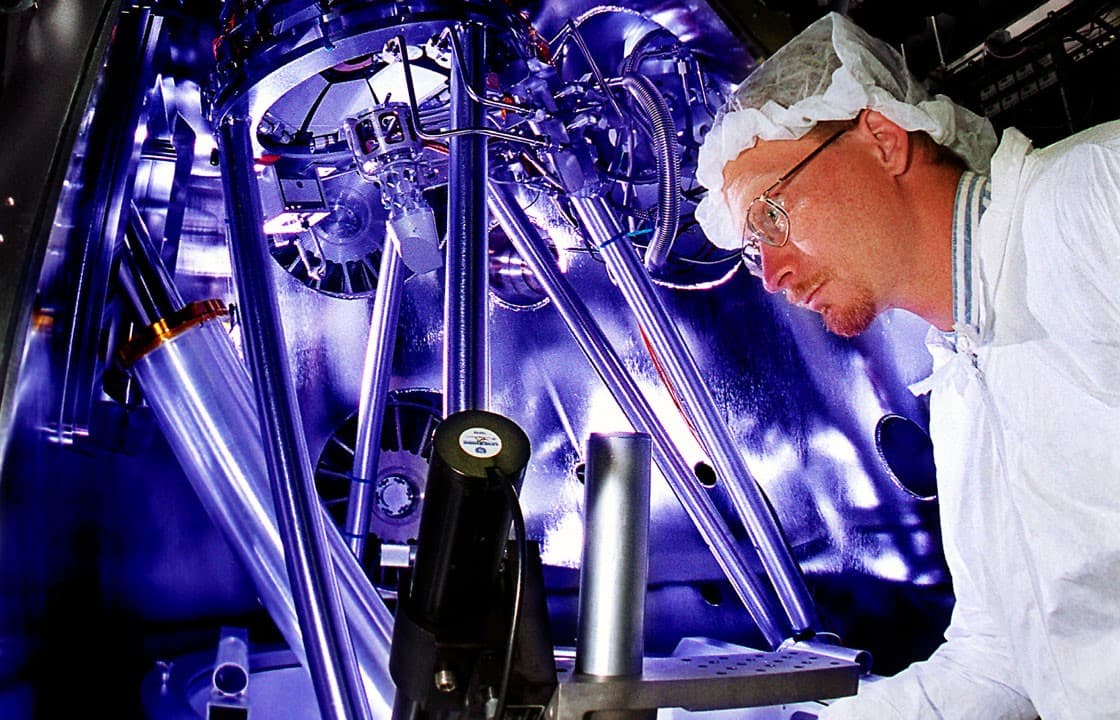 A milestone in microprocessor technology was achieved in 2001 when Sandia, Lawrence Livermore, and Lawrence Berkeley national labs, along with a consortium of chipmakers developed and demonstrated an extreme ultraviolet lithography system.

The lunatic $280 billion “CHIPS and Science Act” (CHIPS+ACT) which passed the Congress at the end of July, can be quickly dismantled by a new Congress taking office in January, 2023. This must be a  priority. The ‟CHIPS Act” is rot and insanity, and a mortal threat to survival of the United States as a republic.

However, it is also very ironic: it is a metaphor for the state of our U.S. physical economy!   Today, we produce less and less, and that is what we must solve!—starting with the new Congress, sworn in January, 2023!  See the LaRouche PAC REPORT—For a U.S. Economic Recovery: A Third National Bank Now Indispensable, on how we can begin to rebuild our economy in depth.

In a sane, productive economy, semiconductor chips and software play an important, even critical, role, whether in the use of robotics in manufacture; GPS and ground sensing technology, biotech and medical devices; or the mother of the semiconductor chip, space science and exploration.  Today, semiconductor chips are marvels of sophisticated engineering and manufacturing, now holding billions of transistors on a single chip smaller than a fingernail.  The software run on chips for the control of physical processes as well as communications is increasingly sophisticated.

However, the data so utilized, including that of cell phones, tablets and computers, also requires humongous amounts of very physical ‘cloud’ storage,  with data centers running into millions of square feet.  Here again, chips, data and code intersect the physical world.  Chipsƒ and their supporting software and code, depend on the productivity of an extremely skilled labor force and the physical production of energy, mines, metal alloys, and manufacturing, all delivered on time.  Data centers require electricity to power their servers, storage equipment, backups, and power cooling infrastructure.

As we have recently painfully learned, these and other production and supply chains, no matter how digitally sophisticated, do not, by themselves, deliver the actual physical goods. If the transportation grid is failing, if people are not fed, if there is not enough skilled labor, the physical product required is not produced.  Creating reliable modern industrial production, fueled with nuclear and other advanced fuels, and powered by frontier scientific discovery, requires a coherent national industrial policy which is nowhere present in the CHIPS+ Act,

The “Chips and Science Act” (CHIPS+ACT) passed the Congress in late July with a Uniparty vote.  You probably heard the semiconductor executives, the legacy media, tech publications, and Senators and congressmen howling, that U.S. national security was threatened and that America was losing its lead in science and technology to China and God-knows-who-else.  $50 billion will go to subsidize semiconductor companies to build advanced computer chips. There is also a 25% tax credit and more.

The rest of the $280 billion, i.e., the vast bulk of the money, however, goes to undermine science and real R&D.  The legislation slow walks NASA’s Artemis program—President Trump’s initiative to return astronauts to the Moon by 2024 and prepare for human missions to Mars and other destinations—into the 2030s and beyond.  It imposes a “directorate” on the National Science Foundation, further turning it “woke” and “green.”  Under this regime, if a researcher can make the argument for a connection between advanced work in hydrodynamics and societal acceptance of gender fluidity, there is a good chance of receiving a grant.

It was claimed that the $280 billion CHIPS+ bill “had” to be passed “to save the US auto industry” and our mainstream U.S. manufacturers.  This was also a lie and a swindle.

The truth is that in the entire $280 billion CHIPS+ Act, there is a mere $2 billion allocated to the “mature” chips used in automobiles and appliances.  At the same time, the bill actually includes a provision that would allow companies that accept CHIPS+ Act funding to manufacture those mature chips in China!  (Unlike smartphone chips, automotive chips are safety-critical and need to perform in practically every situation regardless of temperature, humidity, vibrations, dust, gases, and even minor road debris.  With so much at stake, car makers have seen “tried and true” as better than ‟tiny and delicate.”  Chip makers have also avoided the market for basic automobile chips for the same reason).

And, as usual now, there was a prolific amount of double dealing and corruption. In May, 2021, Microsoft, Google, Amazon, Apple and Cisco formed the “Semiconductors in America Coalition” to ensure the CHIPS+ bill included billions for semiconductor manufacturing and that it did NOT prioritize the production of semiconductors for other industries, such as carmakers.  Big Tech and Silicon Valley unite!  The advanced chips and “leading nodes” promoted by the CHIPS bill are those smaller than 10-nanometers, a far cry from those now used in most new cars and appliances.  House Speaker Nancy Pelosi’s  husband got caught and had to sell-off $5 million worth of ill-gotten shares of chip designer Nvidia.  Prime Senate sponsor and Majority Leader Charles Schumer envisions a big direct investment in his home state’s economy.  More than two dozen of Microsoft’s top executives donated to Schumer’s campaign, along with Google executives and its PAC.

We must also recognize that “advanced chips” and then the “leading nodes” in chips, now being promoted as the next generation of chip manufacturing for the U.S. serve multiple purposes.  They do hold important potential for the future of manufacturing, agriculture, transportation, and infrastructure.  However, they are now being built for ‘green’ fascist Utopians desperately intent on unconstitutionally framing up President Donald Trump, suppressing the MAGA movement, and preventing a revival of the American System of economics.  They utilize the present surveillance state for this purpose.  That surveillance regime needs faster and faster chips!

In the 1990s many chip-makers both designed and manufactured their semiconductors. But fabricating chips is an infrastructure and capital intensive process. It requires a skilled workforce that has to be paid well.  Central banking and Wall Street “financialization” and “cost-benefit analysis” dictated that semiconductor chip-makers outsource the “expensive,” physical manufacture of their designs to cheap, dedicated factories (“fabricators”) in Asia. Some companies retain fabrication capacity, in the U.S. and abroad, but most have become “fabless.”  Better said, all became “flabby.”

Together with their Silicon Valley twin, Big Tech, chip-makers entered the virtual reality of NON-PRODUCTION.  They lost the ability to create through the process of actually taking the most advanced ideas, and scaling those ideas up, through a collaboration with an increasingly creative and productive manufacturing workforce which was assimilating ever richer ideas and methods.  They lost their mojo.

Former Intel CEO Andy Grove famously spoke to the process of experiment-prototype-translation to manufacture in the 2000s, in his own terms. “Without scaling,” he wrote in 2010 in Bloomberg, “We don’t just lose jobs—we lose our hold on new technologies,” and, “….There's more at stake than exported jobs. With some technologies, both scaling and innovation take place overseas... Losing the ability to scale will ultimately damage our capacity to innovate.”  Even though he was not listened to by the predators of “The City” in London and Wall Street, Congress was aware.  A 2003 Congressional hearing—almost 20 years ago—started with reference to Andy Grove’s already-well-known warnings.

The man who really went to the heart of this matter was economist and statesman Lyndon LaRouche.  Beginning in published locations in the 1980s and continuously thereafter, LaRouche highlighted what he termed the “Machine Tool Principle” linking the process for scientific crucial experiment to prototype, and then translation to manufacture. The “suggestion box,” located on the manufacturing plant’s shop floor, embodied the importance of contributions from manufacturing workers to the dynamic “scaling” process, adding individual discoveries of potential new innovations and applications.

Today, fabless chip companies design—but do not manufacture (“fabricate”)—semiconductor chips.  So, the U.S. share of global semiconductor fabrication capacity (i.e., manufacturing ability) continues a long-term decline from around 40% in 1990 to just 12% in 2020.

The biggest U.S. fabless semiconductor companies—such as Qualcomm, Nvidia, AMD, and Broadcom—today have revenues each in the billions of dollars, passing through them to their Wall Street equity partners, stockholders, and financiers.  Qualcomm, Nvidia, AMD, etc., are providing the designs that are then produced and packaged by foundries and auxiliary firms, almost entirely located abroad.

“Give Us Your Money!”

Most U.S. integrated device manufacturers, however, like Micron and Intel, have moved production outside the United States, to increase returns, just as Andy Grove had warned.  They, together with Wall Street, now expect U.S. taxpayers to pay to move production back to the U.S. and subsidize it.  Intel long ago moved production facilities to Ireland, Israel, and China itself. Likewise, US-based Micron, based in Idaho, has factories in Singapore, Japan, and Scotland.

Both Intel and Micron also do have some production facilities in the U.S.—Intel in Chandler, Arizona, and Micron in Boise, Idaho, Utah, and Manassas, Virginia. All the better to shamelessly claim now that: ‟The average rate of chip manufacturing output has grown five times faster overseas than it has in the United States over the last decade. This is largely due to robust incentive programs nations have put in place to attract semiconductor manufacturing. The United States must implement similar incentives in order to remain competitive.”  In other words, we have to pay them huge sums to get them to come back to this country.

The actual dynamic that sank America’s leading position in the global semiconductor chip market was:

This global, cancerous growth in “financialization” and the “information age” has been fed by the British empire’s global central banking system.  Hell-bent on the destruction of sovereign nation states, systems analysis is applied across all decisions, including life and death—reducing everything to mere cost-benefit algorithms manipulating amoral digital bits of information.  Sound familiar?  This has actually been the insane “logic” applied to carry out the feudal de-industrialization and “greening” of our entire U.S. economy.  Industry and manufacturing have been increasingly replaced with a mere illusion:  that computer chips and cow chips will power America.

The argument for CHIPS+, by the Semiconductor Industry Association (SIA) and others, goes like this:

What fraud!  It is our whole economy that is failing to produce! Our actual national security depends instead on a complete rebuild of America’s advanced energy production, mining, heavy industry, and making the US once again a manufacturing superpower! The Biden collective is now attempting to impose an absolutely fraudulent “industrial policy” and “national security policy” on the entire U.S. economy and the American people.  They demand that we devote trillions of dollars of human and material resources—and that is what ‘experts’ say it will take—to promote worse-than-break-even intermittent wind and solar energy while prioritizing advanced chips and ‘leading node’ to enable the Green New Deal and “Great Reset.”  Such a Utopian green fascist policy would throw our nation’s currently shrinking physical productive capacities into a burn pit.

We must examine how this Big Tech/Silicon Valley swindle could ever occur, and make sure it never happens again!  What traitors were in our midst?  Answering that question will lead the investigator directly to the door step of the Federal Reserve and the modern day British Empire’s Central Banking System—as well as to the required solutions.  We must make American great again, both scientifically and technologically, and that means as a full-set manufacturing super power!