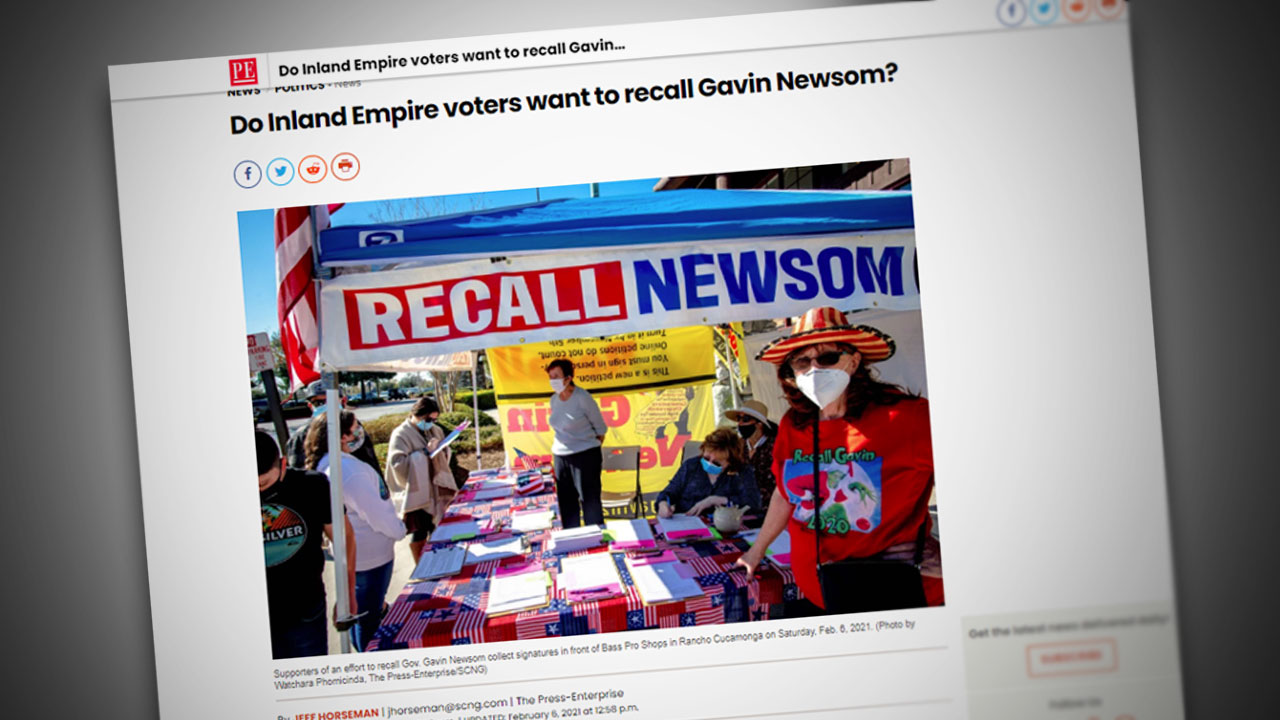 Panic is now stalking Governor Gavin Newsom and the other swamp creatures who rule over California as if it were their own personal fiefdom.  On September 14th California voters will go to the polls, with mail-in voting already ongoing, to decide if Gavin Newsom will be recalled,—removed from office, and replaced by the candidate who receives the most votes in a special election.  Months ago Newsom, the man with the hairdo and elitist self-entitlement, dismissed the recall as the certain-to-fail work of a handful of political malcontents and cranks.  Today public opinion polls show that the recall vote may succeed, and that support for the recall is spreading among registered Democrats, Hispanics, Asian-Americans and African-Americans.  Newsom’s braggadocio has vanished, replaced by fear.

What this election has already proven is that “politics-as-usual” no longer exists. Increasingly, the residents of California are responding to the reality that their lives are being destroyed and that their elected officials have betrayed them. The stale outdated rhetoric of the baby-boomer leadership of both the Democratic and Republican parties is now exposed as meaningless. This campaign is now driven by legitimate popular demands for a future.

It is also becoming very clear that this election has enormous national political importance. The policies that Newsom has championed are the very same that have decimated the productive economy and lives of our citizens nation-wide over the last 30 years, and the current agenda of Newsom and his cronies—on energy, drugs, education, Covid, climate change, etc.—is identical to the “Great Reset” and “Build Back Better” schemes of the Washington, D.C. consensus and the oligarchical World Economic Forum. If this recall passes it will represent a rejection of the Green New Deal and other policies of the Biden administration, and essentially it will be a repudiation by the people of California of how they voted in the 2020 Presidential election.

Want to help? Let us know what you can do below!

California is popularly considered to be the bluest of the “blue” states. Solidly Democratic. Certainly, in terms of election results over the last 20 years, this is true. It is also true that the political tyranny which has ruled over California has impacted national politics in a major way. Vice-President Kamala Harris, Speaker of the House Nancy Pelosi and Governor Gavin Newsom all have their political bases in San Francisco. They are all part of the same incestuous political family.

But at the same time California is a microcosm of the entire nation. Much like the Great Lakes region, the farm belt and the Mid-Atlantic states, during the 1940s, 1950s, 1960s and even into the more problematic 80s and 90s, California was a productive powerhouse. California agriculture was the wonder of the world. Scientists and engineers came from all over the planet to study California’s great water projects. The California aero-space industry, which employed hundreds of thousands of skilled middle class workers was the largest and most advanced, not only in the United States, but world-wide. California’s nuclear energy industry was also at the national forefront of advanced energy design and production. Much like the United States of America, California was based on production. And like the rest of the country this was all torn down in the last 30 to 40 years, leading to the post-industrial wasteland of today.

The Hell that is California today

California is now experiencing the worst fire season in its history, with 6,810 fires recorded and 1,683,620 acres burned to date. Whole portions of the state are literally up in flames. At the same time water shortages have led to the banning of water delivery to the farmers of the Central Valley and mandatory water rationing in many other areas. Rolling electricity blackouts are now an everyday occurrence in many parts of the state. Homeless shanty-towns now abound, particularly in Los Angeles county and the San Francisco Bay Area with tens of thousands, minimally, living on the streets. The drug epidemic rages on with more than 9,000 deaths from opioid and fentanyl overdoses in 2020. The mandatory Covid lockdowns and restrictions, ordered from Sacramento, have bankrupted and crippled hundreds of thousands of businesses and individuals.

Meanwhile, Newsom and his rich backers in San Francisco, Silicon Valley and Hollywood spit on the working class people of the state. Oblivious to the human suffering, they plunge ahead with their utopian fantasies:—building bicycle lanes in the cities, legalizing more varieties of deadly drugs, imposing critical race theory, climate change superstition and gender-identity confusion in the schools, in government agencies and on the entire population. The elimination of what is left of California’s productive economy is now guaranteed by the state’s Carbon Cap-and-Trade program, one of the most stringent in the world, which mandates the reduction of “greenhouse gas emissions” to 40 percent below 1990 levels by 2030, and 80 percent below 1990 levels by 2050. Newsom, Pelosi, Harris all point to this murderous “green policy” with unabashed pride.

On Thursday, August 26, former California State Democrat Majority Leader Gloria Romero publicly endorsed the recall of Newsom. But Romero’s action, which she stated was based on Newsom’s abysmal failure in the area of education, is just the smallest tip of the iceberg. Over the last four weeks a non-partisan group called Take California Back has sponsored 7 round-table forums (with 2 more scheduled) among the candidates who are currently running against Newsom. Ten candidates have participated directly in the forums, and additional gubernatorial candidates, as well as several Congressional and other candidates, have been involved in informal discussions with representatives of Take California Back. What has been most striking about the forums is the participation of candidates who self-identify as Democrats and Independents, in addition to the Republicans. Although there are disagreements, the common theme which they all enunciate in different ways, is that the people of the state have no future under the currently dominant political paradigm. One might say that they view each other as competitors, but they view Sacramento as the enemy.

These forums have been remarkable, almost unprecedented. The mental disease of “single-issuism” is nowhere to be found. Instead, there is a grappling about what to do about the future. From water and energy to homelessness and education, the candidates have engaged in an intense dialogue on how to rescue the youth of the state and how to re-build California’s productive economy.

What exists today is the potential to do what Abraham Lincoln did in 1856 when he took disparate political factions and unified them around the principles of the Declaration of Independence,—when he recruited Americans into a unified mission to save the Republic. This is a turning-point, and as such we should also think of the Battle of Saratoga in the autumn of 1777, when after two years of retreat and military losses, the Continental Army demonstrated to the entire world that a powerful oligarchical enemy could be defeated. They proved that revolutionary change could be won. It was a turning point for humanity then, just as the September 14th vote could be for us today. A defeat for the oligarchy in California will reverberate world-wide. It will change the entire political landscape.


LaRouchePAC is on the ground and leading the fight in California, support our work with a donation.