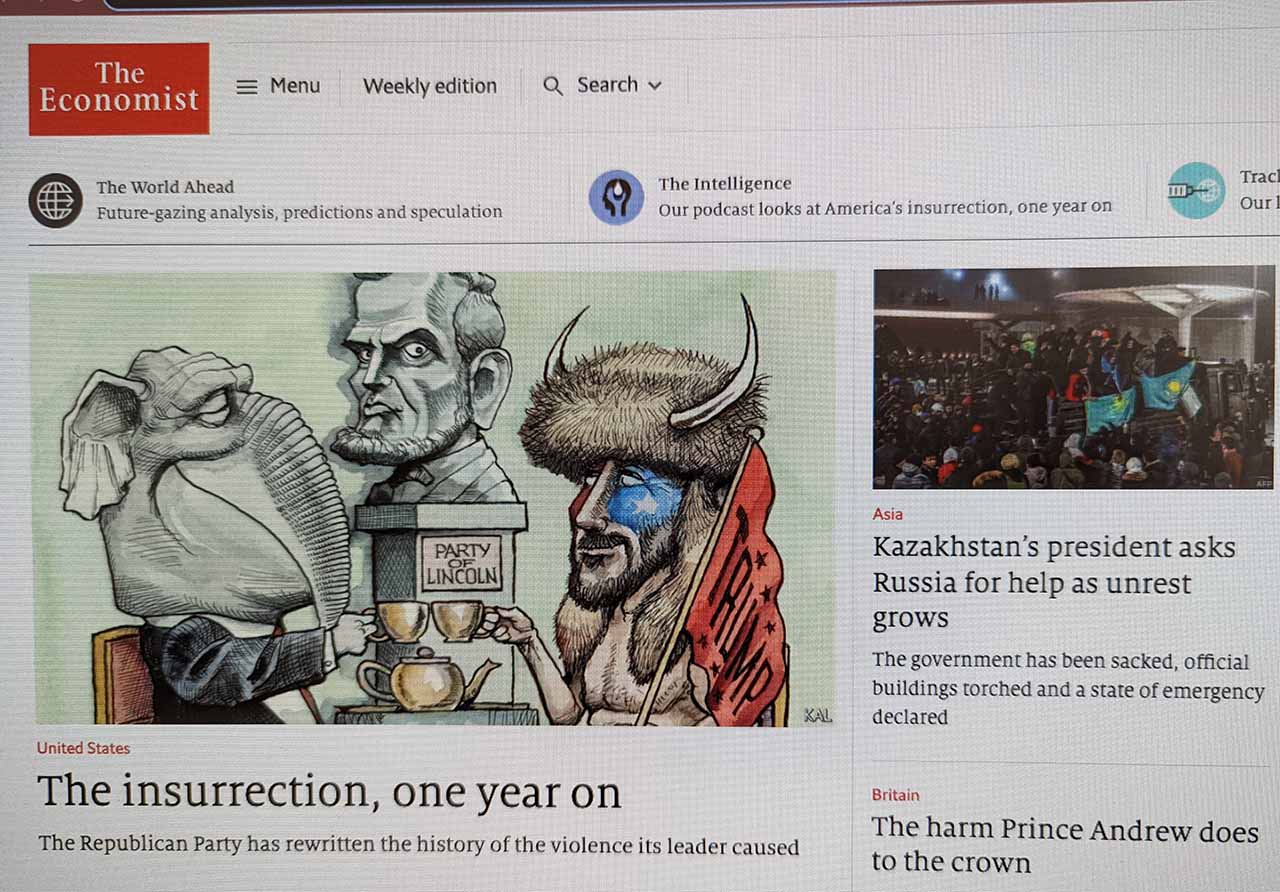 The Cartoon on The Economist's Front Page Shows that the British Know What is Actually At Stake; That's Why the Tories in Washington Have Gone Nuts

Simply, because absolutely nothing Joe Biden has done has worked. Simply, because despite all they have done to poison, persecute, defame, and frighten, Donald Trump remains the leader of the Republican Party and a mass movement in the United States, crossing previous partisan divides, and defying the awful fate the globalists thought they would have successfully implemented here by now.

Biden and the clown-show staff which runs him put the Mexican cartels in control of our southern border. As a result, 100,000 Americans have died of drug overdoses over the past year. He failed in Afghanistan; failed against Covid; and failed to ease the so-called supply-chain crisis, which is still intensifying. As inflation zooms ever faster toward hyperinflation, his Build Back Better globalist prescription to drive this nation even further backward, has failed. Like those at Belshazzar’s Feast, they stare at the handwriting on the wall, and have launched a desperate effort to control the voting in this year’s midterms under the pretext of “voting rights.”

Nor have the unprecedented attempts of Biden’s global masters to crush Donald Trump and his movement worked. Quite the opposite. This past year has seen a self-activation and organization of millions of Americans, who have determined that they must step forward and act … as candidates, as election workers, and as citizens forming groups to address the manifold crises facing the nation. You do not see this in the mainstream media, but this is the lion “aroused from slumber” that the elites mortally fear.

As President Trump said on January 6, it is only the beginning. “Our brightest days are before us. Our greatest achievements, still away.... And I say this despite all that’s happened. The best is yet to come.”

January 6, 2021, will stand forever in history. No, not the staged riot in the Capitol, nor the wild fabrications about that two-hour riot, nor the abrogation of all constitutional protections for those the FBI has rounded up and charged in the largest manhunt in its history. Nor the unpunished murder of Ashli Babbitt and others and the continuing witch-hunt conducted by the highest levels of this government against their political opponents. That is, indeed, the shameful aspect of January 6th, the closing chapter of a coup conducted against the Trump campaign and Presidency which began from Britain with dire warnings in 2015, and was carried through by the Obama White House and intelligence agencies. It featured a summer of orchestrated riots and violence aimed at turning out the vote for Joe Biden, and found its ultimate act in the theft of a presidential election. That is the ugly chapter written by the people who call January 6th an “insurrection.”

There was another January 6, 2021, the one experienced by the thousands who descended on Washington to protest the obvious election theft and listened to the President of the United States. That was a milestone-marker of the reawakening of the American people. They had watched the increasingly frenetic establishment coup against Trump, contrasting his policies with theirs, particularly Trump’s attacks on the globalists, his ending of their forever wars, his re-assertion of the sovereignty and purpose of the United States. They were now wide awake and were now there to figure out a way to address the theft of the election.

LaRouche PAC was there in Washington that day, and our immediate, on-the-scene video assessment stands just as true today as when it was given: “The American People have stood up peacefully, and won’t sit down until America is restored as a Constitutional Republic.” (The LaRouche PAC team also called out the staged provocation in the Capitol while it happened, see next video.)

It was Lincoln who restored the United States to the mission of our Declaration of Independence, as a beacon of hope, a temple of liberty, and a superpower of science, industry, and agriculture, fit to inspire all of humanity to the mission given us in Genesis 1.26.

It was Lincoln’s establishment of the Republican Party, as the party of producers and patriots, and his rediscovery of the American System of economy and its spread throughout the world, which threatened the British Empire. Our enemies saw in Donald Trump’s election a reemergence of that threat, and the coup against President Trump was only the latest chapter in the British Empire’s long effort to contain and ultimately destroy Abraham Lincoln’s America. Ever since Lincoln, every war in the world has been connected to that British Imperial objective. Thus the endless wars launched by every post-Cold War President before Trump, were actually directed against the United States itself, not supposed foreign enemies.

But on January 6, a sleeping giant was awakened. As President Trump said then, “And we fight. We fight like hell. And if you don’t fight like hell, you’re not going to have a country any more.

“Our exciting adventures and boldest endeavors have not yet begun, my fellow Americans, for our movement, for our children, and for our beloved country.”

Contribute to LaRouchePAC's fight for this future.