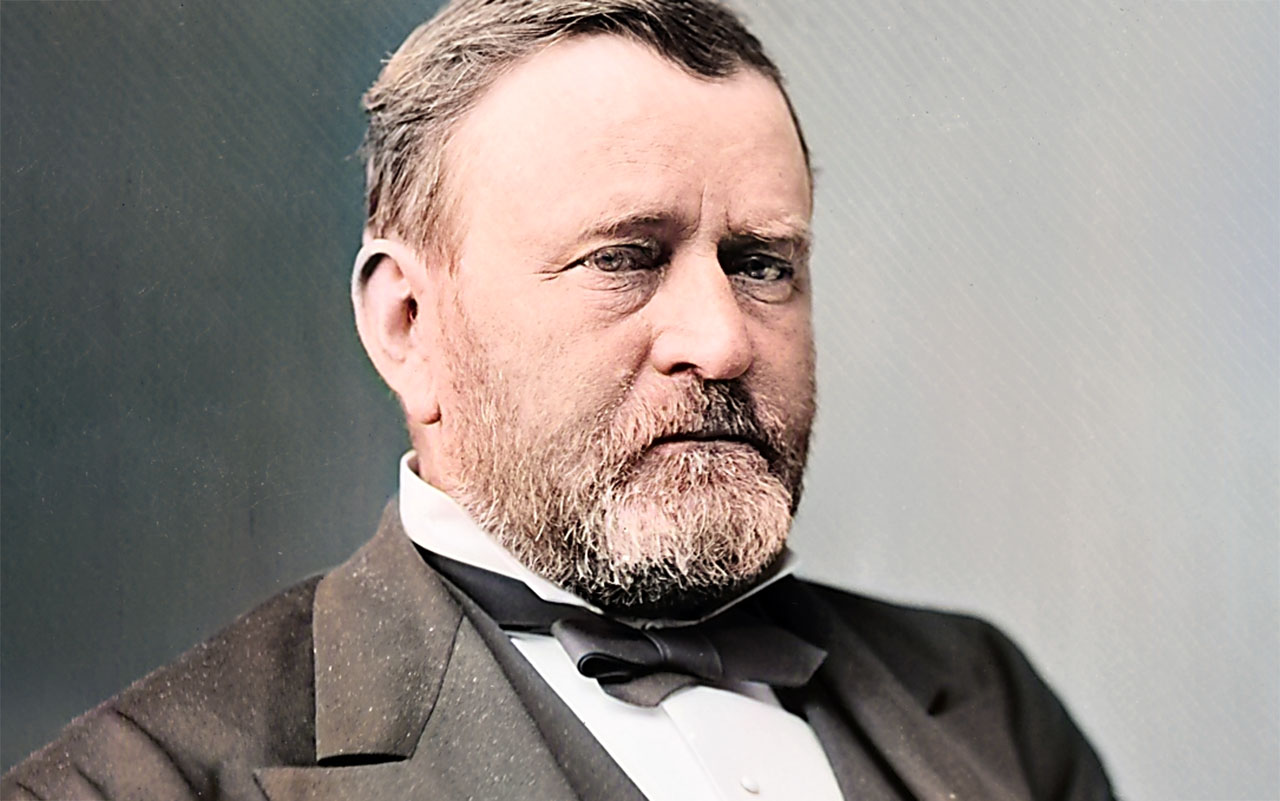 “In Grant the Negro found a protector, the Indian a friend, a vanquished foe a brother, an imperiled nation a savior.” —Frederick Douglass

In reality, Grant was attacked for the same reasons—and by the same interests—as President Donald Trump and American statesman Lyndon LaRouche. Grant, together with Abraham Lincoln, saved the American Republic and defended its sovereignty. His entire life was dedicated to the “self-evident truths” of our founders: “that all men are created equal, that they are endowed by their creator with certain inalienable rights, that among these are Life, Liberty, and the pursuit of Happiness. That to secure these rights, Governments are instituted among Men, deriving their just powers from the consent of the governed.”

The British Empire and their Anglophile allies in America hated Grant precisely because, like President Donald Trump and American statesman Lyndon LaRouche, Grant fought for these principles. He could not be bought off or frightened off. All three of these great American statesmen were committed to the advancement of our Republic and humanity; all three were against war and intent upon creating the conditions for peace; all three were ruthlessly intent on succeeding.

When Lincoln was assassinated, it was General Grant who personally held our fragile nation together. Having just fought and won a bloody civil war, our economy was in shambles and our nation was in shock and mourning. There were many in the nation’s capital who were not too upset that Lincoln was gone, but Grant stood up to the worst of them and found a way to work with the others. Grant embraced Lincoln's spirit of “malice toward none” and worked on Southern reconstruction even though many in both the North and the South sought to wreck the fragile peace.

I will only mention one aspect of Ulysses Grant the soldier. During the war, there were many Generals vying for Grant’s position, and they were constantly urging President Lincoln to fire Grant as an incompetent drunk. Lincoln's only response to them was: “I can't spare this man—He fights!!” Lincoln trusted Grant more than any other General under his command.

Grant the President: “Malice Toward None”

Grant was elected President in 1868, and reelected in 1872. He accomplished nothing short of a miracle in those eight years; all the while he was under constant attack and sabotage from the “Fake News” media of his time, and from anti-Lincoln forces in all parties—many functioning under the direct influence of the British Empire. Like Trump today, Grant stayed focused on the people he was elected to serve, and never wavered from that mission. Here are just a few of his accomplishments:

Grant as Patriot and World Citizen

After 8 years as Commander in Chief of the United States, which he kept united, he retired to become a private citizen of his nation.

Then, in an action completely unprecedented, only two months after leaving office, he embarked on a world tour that would last two and a half years. This was a tour in which Grant took the principles of the American Republic and the knowledge of the American System of Economics to nations all over the world. This is a part of Grant's life that is not well known, so I will here provide more depth on this aspect of his life as a world diplomat.

Grant visited many, many nations—including England, Scotland, Ireland, France, Germany (Prussia), Holland, Italy, Egypt, Jerusalem, Russia, Austria, Spain, Portugal, India, Burma, Singapore, Siam, China, Hong Kong, and Japan. Throughout Grant’s worldwide pilgrimage, he and his wife were treated like heroes and world citizens. They were greeted by hundreds of thousands of people in all the cities they visited. He was one of the most well-known leaders in the world, because all eyes were on our new Republic that had first defeated the British Empire, and then won a brutal civil war in which the British supported the Confederacy. The Grants were made honorary citizens of dozens of nations, given the keys to many cities, met with parades, fireworks, and grand banquets. All were impressed and surprised to see that Grant was a humble and gentle human being.

With “malice toward none,” the first place the Grants visited was England. The mayor of Liverpool greeted Grant with this: “I am proud to welcome to the shores of England so distinguished a citizen of the United States. You have, sir, stamped your name on the history of the world by your brilliant career as a soldier, and still more as a statesman in the interest of peace.” While in England, Grant wrote this to a friend: “It is my desire to see all wounds between England and the United States healed. Together we are more powerful for the spread of commerce and civilization which can do more to remove the causes of war.”

To all the praises Grant received from around the world, his response was the same: “I am forever grateful for these kind words, but the honor is to my great country, not to me.”

Twice while in Scotland, Grant referenced then-current American practices in vote fraud: “In America, corrupt immigrants vote in our elections, and my democratic enemies reaped the benefit.” With tongue in cheek, upon being made an honorary Scottish citizen he said, “I find that being made a citizen of Scotland, it will become a serious question as to where I should vote, and with transportation, I might vote frequently by starting early. This is a crime that is very often practiced by people who come to our country, and not just Scotchmen, but many others.”

Grant was able to spend many hours on several occasions with Otto von Bismarck of Prussia. They were both military men and had great admiration for each other. Bismarck asked whether the Civil War could have been ended sooner if America had had a bigger and better prepared army. Grant's response was: Our war had many strange features, which seemed odd at the time, but now seem providential. If we had had a large regular army, that army might have gone with the South. The Southern feeling in the army among high officers was so strong that when the war broke out, the army we had dissolved. We had no army, we had to organize one. A great commander, like Sherman, might have organized an army and put down the rebellion in one or two years, but, that would have saved slavery. There, we were fighting an enemy with whom we could not make peace. We had to destroy him! No convention, no treaty was possible—only destruction! It was a stain to the Union that men could be bought and sold like cattle.”

Many leaders who sought out Grant, asked and even pleaded with him to intervene in some dispute within their country, or with other counties. They all respected his ability to work toward justice for both sides.

The conflict between China and Japan is a very good example. When Grant arrived in Shanghai, he was greeted by over 100,000 Chinese! He was immediately taken to meet Viceroy Li Hung Chang, the second most powerful person in China. Unknown to Grant, the Japanese had just forcibly removed King Sho Tai from the Ryukyu Islands as part of its effort to occupy those same islands, long claimed by China.

Li Hung Chang asked Grant if he could talk to the Japanese on China's behalf and resolve the dispute. Grant assured him that anything that he could do in the interest of peace would be his utmost desire, and that he would study both sides of the conflict. Prince Kung, the leader of China, met with Grant on many occasions, and each time pressed Grant to help. In reply, Grant referenced the Alabama claims of the United States against England. It was known around the world that Grant had negotiated a peaceful resolution to that dispute. Grant said, “Arbitration may not satisfy either party at the time, but it satisfies the conscience of the World and must commend itself, as we grow in civilization, as the means of adjusting international disputes.”

On June 21, 1879, the Grants arrived in Nagasaki, where the Japanese had prepared a huge welcome. The Emperor Meiji quickly arranged to sit down with Grant, and on every occasion Grant brought up the Ryukyu Islands dispute. The Emperor already highly admired Grant and the young American Republic. Only 27 years old, he was in the process of creating a Japanese constitution, and he wanted it modeled on that of the United States. The two of them spent many long and fruitful hours discussing the ideas embedded in our Constitution and the idea of national sovereignty. Grant told him: “Avoid at all cost borrowing abroad. Foreign loans bring danger and humiliation.” He cited Egypt: “They were encouraged to incur huge debts. The result was that Egypt was now under the control of her creditor nations: England and France.”

Grant ended his world tour in Japan. Used to speaking extemporaneously, on this occasion he gave a short, carefully prepared speech: “Japan has many possibilities for the future. Her assets in fertile soil, undeveloped mineral resources, numerous and fine harbors, seacoasts abounding in fish of an endless variety, and, above all, an industrious, ingenious, and frugal population. With all these nothing is wanted to ensure great progress except wise direction by the government, peace at home and abroad, and non-interference in the internal and domestic affairs of the country by outside nations.”

Thus, both China and Japan found a true friend in Grant and his representation of America. Their dispute was solved, and both quoted Grant extensively as they moved their nations forward, made richer by their new friend, the great and good American, General Ulysses S. Grant.

I hope you have learned from this why Grant is hated by the globalist imperialists and the bread scholars who have rewritten our history, and that you will find the time to study him further. He was challenged from every side in saving the Republic. He never yielded. Instead, with each battle, he grew larger, intellectually, and emotionally. He knew that if he failed, the nation would fail. But failure was never an option for him. He was governed by the idea of winning, and he knew that success meant that the future could be boundless and beautiful. Our children deserve nothing less today.