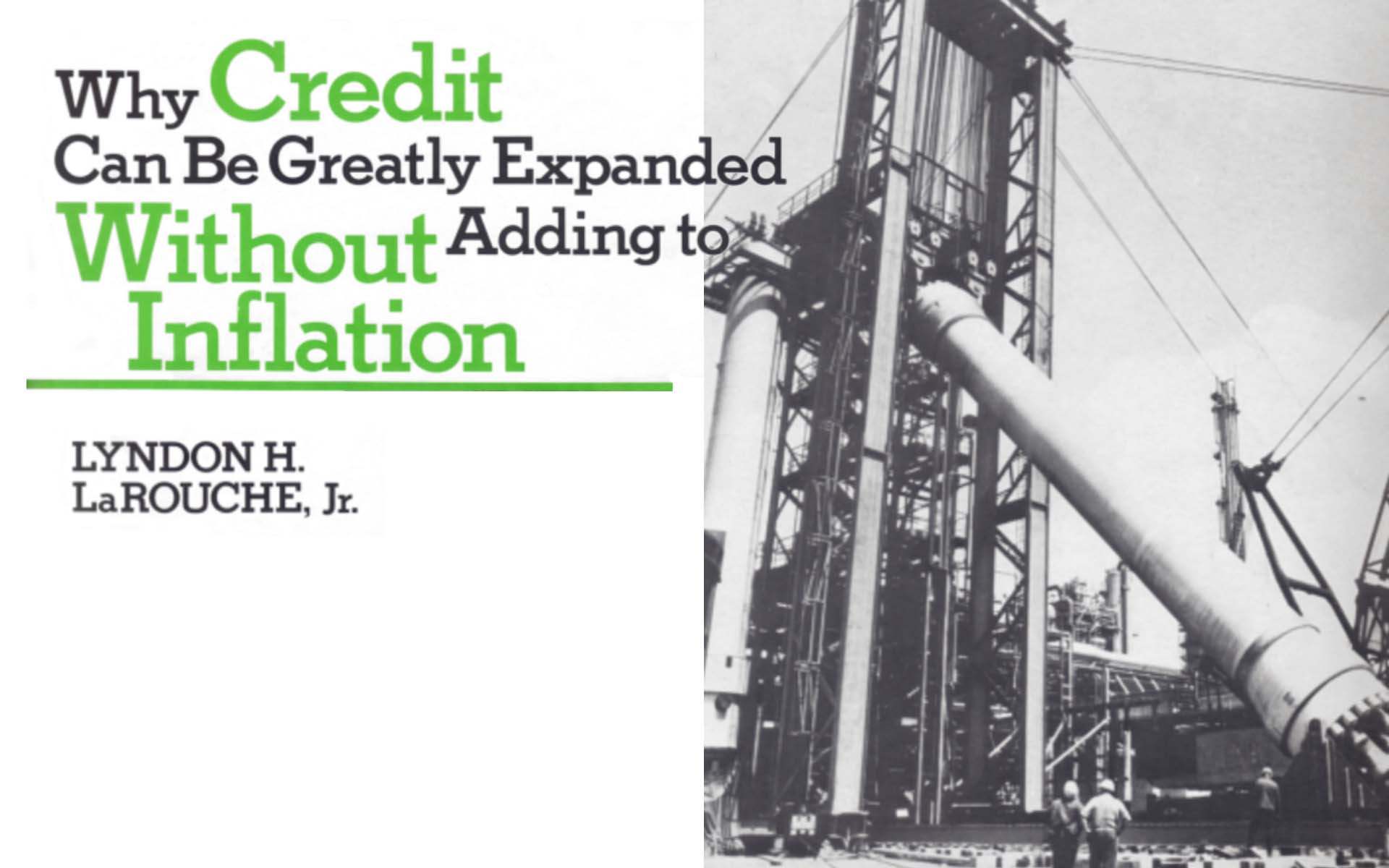 In this short chapter from a pamphlet published by Lyndon LaRouche's National Democratic Policy Committee in 1980 "Why Credit Can Be Greatly Expanded Without Adding to Inflation," Lyndon LaRouche explains why credit, for projects which raise the productive powers of labor, like capital intensive infrastructure projects and funded experiments at the frontiers of science, like the Apollo space program, pay for themselves by transforming the productive potential of the entire economy. They are inherently not inflationary.

Contrast this approach with Biden's Build Back Better program. That program, subjecting this nation to the Malthusian diktats of an international oligarchy based in London, Brussels, and Wall Street, is now using the myth of imminent catastrophic climate change to drive the world's economies into demographic collapse, with remaining smaller populations allowed to live on state handouts in low skill or service occupations. That program, eliminating fossil fuels and cheating on nuclear power generation and the development of fusion power, is driving inflation as is the Federal Reserve's continuing bailout of a banking system which rewards only the oligarchs who run it, through buybacks and looting of the real economy through endless financialization, rather than directing credit to productive investment.

For a concrete example of what LaRouche outlines here, please read Marsha Bowen's post on the Tennessee Valley Authority.

The pamphlet "Why Credit Can Be Greatly Expanded Without Adding to Inflation," in both print and Kindle versions can be purchased on Amazon.

Chapter 4 from Lyndon H. LaRouche Jr's "Why Credit Can Be Greatly Expanded Without Adding to Inflation."

4. The Creation of Credit

There are, generally speaking, two alternative methods for large-scale creation of added volumes of “fiat credit.”  One mechanism was adequately outlined by J. M. Keynes—through a centralized, private banking system. The better method, that of what used to be known as the American System, is through the issuance of governmental treasury, or national banking notes as new currency issue.

In fact, with the existing institutional framework, the generation of credit for world expansion needs will be a combination of the two methods.

It is the generation of fiat credit in the form of currency notes issued through national banking which is most poorly understood today. Clarifying that method provides the basis for subjecting the matter of private credit generation to analysis.

The usual, automatic response to the announcement that this reporter proposes to issue new U.S. Treasury currency notes as the means for credit expansion is a sharp outburst of horror! The auditor exclaims, “But, that’s inflationary!” 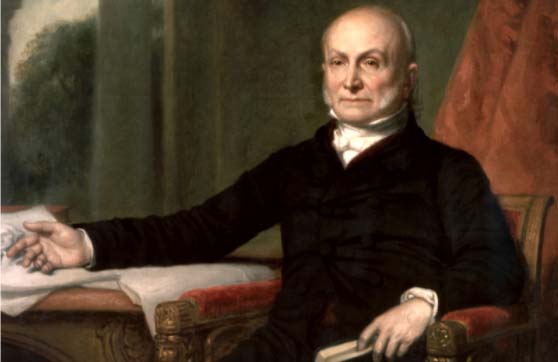 John Quincy Adams (President, 1824-1828) preserved and expanded the Second National Bank of the United States and oversaw its most productive period in generating credit to build American economic strength. The scrapping of the bank by his successor, Andrew Jackson, resulted in a collapse of U.S. credit in the Panic of 1837.

This reaction ebbs, at least somewhat, as this reporter explains:  The new notes are not to be issued against federal government operating deficits, but on capital account. The new currency notes are to be put into circulation through national banking channels, such as participation in loans issued for hard-commodity production and productive-capital loans through the local private bankers of ultimate borrowers.

Therefore, the amount of fiat credit put into circulation through such channels is regulated by the following principal considerations. It is limited by loan demand on account of tangible production’s capacity, technological improvement, and operating capital requirements, and by the demand for such uses of credit among creditworthy borrowers. Each increment of new fiat credit issued through such channels supplements private banking capital also participating in the loan. Therefore, fiat credit is not put into circulation except against a matching increase in newly produced, tangible wealth providing security for this credit issuance. These are the immediate built-in regulators of the amount of such credit issued:  the securing of the credit issued by the tangible wealth created through its use by creditworthy entrepreneurs which is the twofold, crucial consideration.

Therefore, such forms of circulation of increased fiat credit could not be inflationary. Directly the contrary, insofar as it occurs in a climate of promotion of scientific and technological progress, such increase of credit energizes correlated rises in national productivity and is therefore deflationary.

That point outlined; we may proceed then to the next of the points subsumed under this topic.

Why, in any case, should fiat credit be allowed? Could we not, for example, simply increase the rate of savings to the point required to meet the need for investment and loan capital? The answer to the latter proposition is an unequivocal “No.”  There is no circumstance under which savings from current income could be augmented to fulfill adequately this function, in a sustainable way.

Current income is, by definition, the sum of current payments for both direct production costs and for administrative, services and other non-productive, “overhead” costs. Unless the economy is operating either at a loss or is simply stagnating, the sum of the “overhead” costs cannot be as large as the total gross operating profit of the society’s tangible, useful output. Hence, there exists a margin of required credit in excess of current income, a margin which some British-influenced leftists hold up as proof of inherent “over production tendencies” in a capitalist economy.

It is desirable, in fact, that this margin of output in excess of current income paid be rather large. This is the margin of net profit of the economy, the margin which determines the quantitative extent of possible expansion and technological expansion. It is the realization of this margin of net operating profit as development of the economy, which determines, in the first degree, the ability of the economy to overcome entropic tendencies toward stagnation and decay, and, in the second degree, the rate of possible development.

Hence, a healthy economy requires a margin of newly introduced fiat-credit equivalent to this margin of excess of produced values over paid out current income.

Of course, nothing good is accomplished unless such added margins of credit are, in net effect, steered into the act of realization of capital improvements in productive potential. It is possible to generate much larger amounts of fiat credit, and yet, because that fiat credit is improperly invested or otherwise spent as current income, a counter-productive, inflationary result is produced.

The most efficient policy for solving both problems is to curtail all generation of fiat credit except through issues of currency notes on capital account by a national banking system, or similar discipline maintained for a centralized private banking system.

Governmental fiat credit should be issued, except under conditions of national emergencies such as wars, only in the form of currency notes loaned on capital account, either to economic ventures of governments (wealth-creating state investments), or through private banks as participation credit for medium- to long-term loan capital for hard-commodity production investment and production operating capital or export credit.

In the banking system more generally, the desired dirigism is effected by establishing a two-tier system of credit. High-performance borrowers of loan capital for production investment and production operating capital on medium- to long-term should enjoy a low rate of borrowing cost. Soft loans, including loans for secured assets in nonproductive ventures, should be made on condition of a discriminatory, higher rate of borrowing-cost, with undesirable degrees of “soft” perishable consumer purchases excluded altogether.

In addition, increases in state fiat credit on capital account means that reserve ratios for the private banking system should be generally higher than during recent decades. This is a feasible and desirable policy, provided that adequate government fiat credit is provided as participation credit.

Therefore, credit expansion is not in itself inflationary, and, furthermore, properly directed flows of government fiat credit in the form of currency notes circulated on capital account carries the relatively least risk of being diverted into channels of usage which are inflationary.

Which is to emphasize again that Professor Milton Friedman’s conceptions of monetary processes are inherently incompetent.