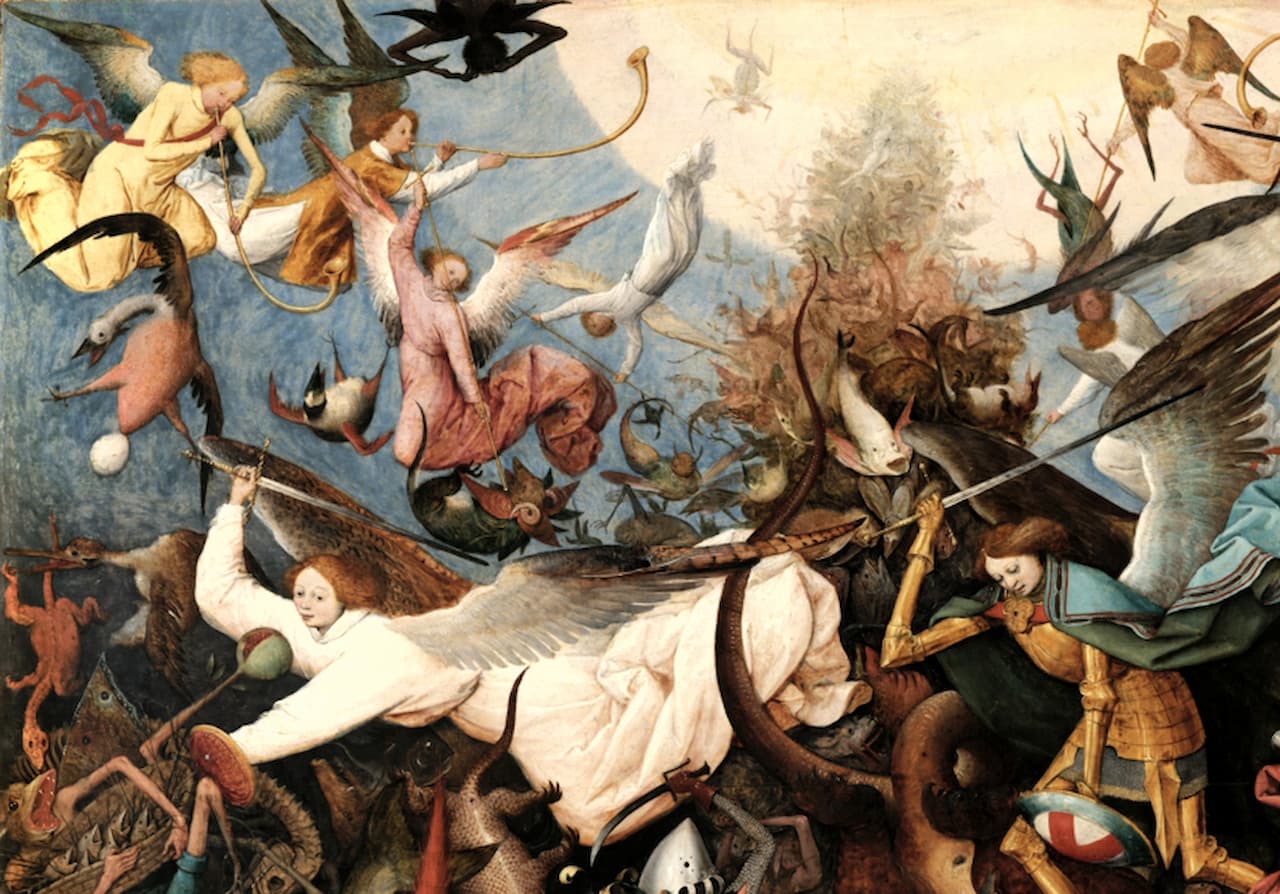 Whipping inflation! (Detail, “The Fall of the Rebel Angels” by Pieter Bruegel the Elder, (1562)

I cannot think it the Interest of England to oppose us in making as great a Sum of Paper Money here, as we, who are the best Judges of our own Necessities, find convenient.  And if I were not sensible that the Gentlemen of Trade in England, to whom we have already parted with our Silver and Gold, are misinformed of our Circumstances, and therefore endeavour to have our Currency stinted to what it now is, I should think the Government at Home had some Reasons for discouraging and impoverishing this Province, which we are not acquainted with. . .

Benjamin Franklin, A Modest Enquiry into the Nature and Necessity of Paper Currency (1729)

We see the inflation hitting, with no let up. Insanely, the Federal Reserve and Biden collective are now apparently intent on raising interest rates further and unleashing the worst of all: price shocks and more inflation (so-called stagflation) and a leveraged debt crisis worse than 2008; and this is being unleashed all at once.

Benjamin Franklin understood the solution to this crisis very well.  He would say that it is not a matter of too little money or too much money; but that it is, “...we, who are the best Judges of our own Necessities...”  Not London and its Tory outpost, the Federal Reserve!  Franklin’s outlook was and is the intent of our Constitution’s Article I, Section 8, Clause 5:  [The Congress shall have Power . . . ] To coin Money, regulate the Value thereof, and of foreign Coin, and fix the Standard of Weights and Measures...

We must take charge.  In November of 2022, it is not just the “woke” that must be ejected from inside The Beltway, but their new replacements must know exactly what must be done now, to restore the United States to its status as a great agro-industrial republic.  As patriots, we must be about the job of ensuring that this economic crisis and potential crash is actually solved in the shortest amount of time possible.

Let’s look at “inflation” through our Founding Fathers' eyes.

It is asserted (by Satan, the financial press, the Heritage Foundation, the Mises Institute, the Senator McConnell types in the Republican Party, and most Democrats) that the present onrushing economic crisis was caused by Covid-era money printing, a collusion of the privately-run Federal Reserve and the federal government.  In short, Satan's argument is that a surplus of money provoked “the animal spirits” of man. Because we were greedy, we spent more than we had.  Of course the British Empire’s John Maynard Keynes completely agrees, stating that many decisions “can only be taken as a result of animal spirits.” 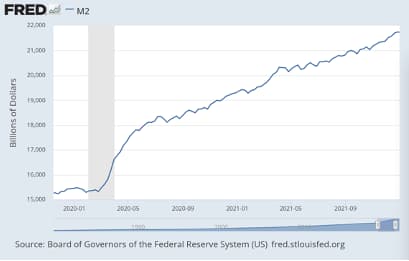 To present their lying argument, these “economists” would point to this sort of graph, taken from the Federal Reserve, showing the expansion of the money supply M2 from March, 2020 through December of 2021:[i]

But in reality, the actual multiply-connected process, leading into a systemic economic collapse is not about mere money or monetary aggregates!  Nor is the crisis solvable merely by manipulating the money supply.  What no one wants to talk about is the growth of parasitic financial values (stock speculation, derivatives, crypto, real estate values, etc.)  and most fundamentally about the collapse of the underlying physical economy.

Consider below, carefully, economist and stateman Lyndon LaRouche’s Triple Curve: A typical collapse function.  Mr. LaRouche introduced his Triple Curve in an address to an economic conference at the Vatican in Rome in 1995.  Here the passage of time proceeds along the “x” axis from left to right. Change, whether positive or negative, is measured as plus or minus delta: 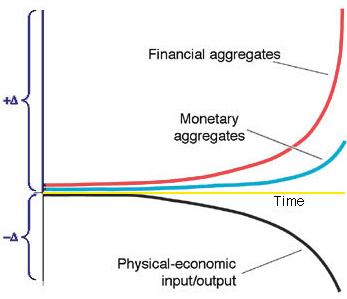 Physical economic production – shown in this function as the lower curve bending downward, is suppressed downwards and declines in real terms at an accelerating rate.  This while the volume of debt and other financial aggregates increases at an increasing rate.  The mere money (“monetary aggregates”) is then being printed (electronically or otherwise) by central banks at an ever-accelerating rate, to service at least a part of “financial aggregates” (growing, leveraged debt service) which are threatening to collapse.  As these three multiply-connected curves become hyperbolic, and particularly as money printing is accelerated eventually even faster than the debt (“financial aggregates”), while the physical economy in terms of physical inputs and outputs plummets, the financial system collapses.  This is precisely what we are seeing today.

We are going to overturn this tragic pattern.

The recovery from this systemic and increasingly global crisis requires that the United States return to the policies of Alexander Hamilton and Abraham Lincoln which made America the world’s leading industrial nation.

The Money Supply Growth Is Only a Symptom

In reality, we can then step back and consider that the expansion of the money printing, as reflected in the expansion of M2 and increasing inflation, has been expanding for decades!  This has been occurring through the deliberate policies of increasing “financialization” of the US economy, fueled by the looting of underlying rates of essential U.S. physical production per capita.

Consider, more broadly, the actual sweep of M2 growth, from August 1971 to today, mirroring the hyperbolic growth of the “monetary aggregates” curve in LaRouche’s Triple Curve:

Of course, the shorter the time frame, as in Graph 1 above, misses the forest for the trees.  That is the intention of those sophists who deliberately promote these kinds of “white lies.”  In August 1971 President Nixon ill-advisedly decoupled the U.S. dollar from gold. The result would be the unfolding of the collapse function that economist Lyndon LaRouche warned of, and which he worked to prevent.

The 50 Year-Growth of Parasitical Financial Speculation

The growth of money, money, money, as in M2 growth promoted by the Federal Reserve, is the deliberate intent of the globalized, British Empire’s central banking system.  They are desperate to sustain the parasitic, run-away, speculative growth of financial aggregates and the systemic looting of the physical economy, with all the horrific societal consequences.  Consider the chart below, again from 1971 to today, showing the speculative growth of the NASDAQ (orange) and the S&P 500 (blue) markets.  Here is seen mirrored the hyperbolic growth of “monetary aggregates” in Lyndon LaRouche’s “Triple Curve,” in Graph 2 above: 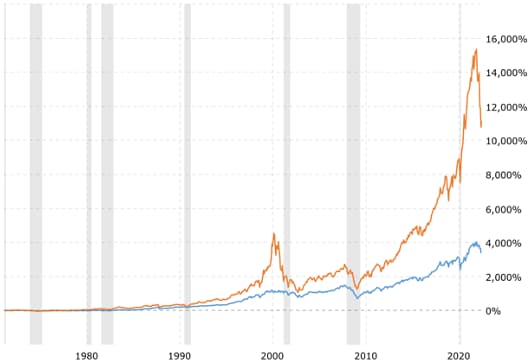 Overlay Graph 4 with the parallel growth of Fed-monetized growth of the money supply, in this case M2, shown in Graph 3.

The Fed's actions drove the creation of a $6.4 trillion increase in the M2 money supply, between March 2020 and the end of 2021. This was a massive 42% increase in only 22 months!  But why did they do it?  Why did central banks in Europe as well as the US actually engage in such a policy?  It was not merely Covid.

The answer can only be actually understood by stepping back and taking in, again,  Lyndon LaRouche’s Triple Curve: A Typical Collapse Function, as capturing the period from August, 1971 to the present.  It uniquely shows what drove the process.  Lyndon LaRouche’s Triple Curve handily captures the consequences, over decades, of monetarist expansion and looting of the U.S. physical economy.  LaRouche understood this lawful dynamic as the followers of Milton Friedman, Keynes, Mises Institute ‘business cycles,’ Modern Monetary Theory – and political hacks like Senator McConnell,  Cecilia Elena Rouse Chair of the Council of Economic Advisers, et al. – cannot.

Ultimately, they can only insist, as Joe Biden's adviser Brian Deese stated, that their “liberal world order” must be saved at any cost.

The ‘Third Curve’ of A Typical Collapse Function

Unlike the mere “counting” of money – as we have utilized to show the growth of monetary and financial aggregates that feed the hyperbolic, cancerous growth of the NASDAQ, S&P 500 and M2 – it is not as easy to capture the empirical qualities that measure the real, physical economic processes of real people and the processes of production and reproduction in a graph.

Real economies are wonderfully complex dynamic systems, not reductionist mechanical ones, most fundamentally because these qualities flow from the nature of human beings. Not “animal spirits,” driven by money and price, but human beings as made in the image and likeness of God.  For good reason economist Lyndon LaRouche invented means by which to measure, in terms of physical economy, the creative, discovering, nature of us all.

“What I have accomplished through my own discoveries in economic science, is to define the inter-dependency of increase of potential population-density with not only advances in technology, but the correlation between the possibility of advances in technology and increase of both the energy-density and energy-flux density of energy supplied to human activity. The increase of the relative and absolute power of nations, in total, per capita, and per unit of land-area, is determined in this way.  Thus, as the increase or decrease of this power determines the relative and absolute conditions of nations and persons, so the results of policies are measurable. The functions for physical economy so defined are non-linear; hence, the making of policy, and the consequences of choices of policy, as their reality is measurable in such terms of physical economy, embodies the same non-linearity.”

Thus, human creativity in a healthy society is expressed in the not-entropic real physical economic growth of our society, morally, culturally, and in terms of physical standards of living and rising productivity.  Not-entropic development can be measured, and forecast, for a society over time. You can find a further introduction to these rich concepts here, and here.

IN THE FOOTSTEPS OF FRANKLIN, WASHINGTON, AND LAROUCHE

At the very heart of our thoughts must be the clear idea of the goodness of the nature of Man.  Of potentially every man and woman. We are not made to be the mere playthings of “animal spirits.”

President George Washington, in his First Inaugural Address to the citizens of our revolutionary new republic, spoke directly to man’s fundamental capacity for goodness.

“...the foundation of our national policy will be laid in the pure and immutable principles of private morality, and the preeminence of free government be exemplified by all the attributes which can win the affections of its citizens and command the respect of the world. I dwell on this prospect with every satisfaction which an ardent love for my country can inspire, since there is no truth more thoroughly established than that there exists in the economy and course of nature an indissoluble union between virtue and happiness; between duty and advantage; between the genuine maxims of an honest and magnanimous policy and the solid rewards of public prosperity and felicity; since we ought to be no less persuaded that the propitious smiles of Heaven can never be expected on a nation that disregards the eternal rules of order and right which Heaven itself has ordained; and since the preservation of the sacred fire of liberty and the destiny of the republican model of government are justly considered, perhaps, as deeply, as finally, staked on the experiment entrusted to the hands of the American people...”

Those profoundly optimistic words, premised upon a profoundly personal understanding of our God-given capacities, are as true today as when Washington stated them, already afresh, in 1789.

We are men and women made in the image and likeness of God. As fundamentally good in our nature, and capable of continual perfection.

It is the knowable existence of these creative powers, in the image of the Creator's, which set the human personality apart from, and above all the beasts.  There is a power in the universe, which the creative powers of the individual human mind can know.

Benjamin Franklin was right.  We are the best judge of our necessities.  We must be about the task of creating them – starting with the creation of a Third National Bank.