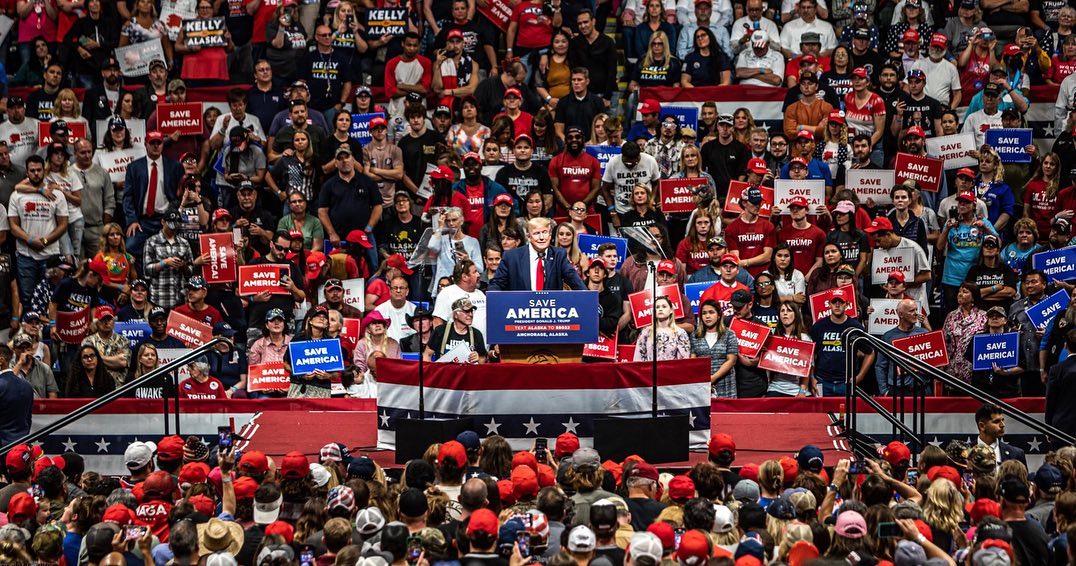 What is the difference between Donald Trump and every other national political figure, as well as most Republican and conservative candidates? Trump has demonstrated, through his 2016 election, throughout his embattled presidency, and through his continuing fight to this day, that he was and is prepared to challenge the entire global imperial system.

Trump shares that characteristic with LaRouchePAC’s late founder, Lyndon LaRouche, who was even more of an outsider and threat to the system than Trump. LaRouche devoted his long life to building a force capable of replacing the criminal post-1971 international monetary system with one based on the American System principles which he put on a more powerful scientific footing. For those of the so-called elite who control the global system, the political force represented by Trump and the intellectual force represented by LaRouche are a mortal threat, which must be stopped at all costs. (And we have seen what that means!)

That is a lesson which Republican candidates had better learn … fast! What the ruling class understands, and all too many candidates and patriots do not, is that this election is not about an aggregation of hot-button topics. It is about taking power so that we can take down their system and restore our sovereignty. That is the message that Americans want to hear, not the tired playbook of the Republican establishment.

SABOTAGE OR STUPIDITY, OR BOTH?

On August 18, Tucker Carlson reported on the polls which say that Republicans in key Senate races, such as Dr. Oz in Pennsylvania and incumbent Ron Johnson in Wisconsin, are trailing their Democratic opponents--in a political environment in which over 80 percent of the American people disapprove of the direction that the Biden collective is taking us! The next night, he suggested they shift their focus to issues of crime, the sexualization of children, and so on.

While those are real crises in our country, Carlson’s solution falls prey to the same fatal error as the GOP politicos he was attacking. As we discovered in a Michigan state representative race in a blue-collar area, Americans are ready for the big fight, the fight to restore our economic sovereignty by replacing the Federal Reserve-centered SYSTEM with a new one.

Instead, Republican candidates are being managed by an establishment campaign apparatus, based on profiling, social engineering, and, most important, maintaining the existing Uniparty control.

In a recent insightful post to The Conservative Treehouse, author “Sundance” describes how the Republican “Club” machine runs campaigns.

“Club branding is subtle on the image front, but very clear on the substantive messaging side. Social issues selected to maximize camp coalition, and influence base.

"Issues around multinational & corporate economics, hard lines, foreign policy, all these things must be avoided – except in general terms.  The U.S. Chamber of Commerce is not to be challenged, not really.  Keep the message social and build the emotional connection. It is harder to break an emotional bond than a logical or cognitive bond.

"These are the political techniques of Lee Atwater that still make up the bulk of the GOP club playbook.   The greatest skill of the professionally republican is to present the illusion of choice in such a way as the voters do not see it.

"Keep in mind, back in Washington DC both clubs are collaborating on the Trump removal program because both clubs’ benefit.”

Two points stand out: First, the focus is on social issues, which establish an emotional connection, not a cognitive one--rather than focusing on issues which potentially challenge the system, such as those which address multinational & corporate economics, hard lines, or foreign policy (don’t touch the Chamber of Commerce). Second, the punchline is: both clubs are collaborating on the Trump removal program.

The signs of the “club branding” are everywhere in the 2022 Republican elections and will potentially sabotage what should be a red wave in November and the takeover of the House and Senate.

Rep. Jim Banks (R, IN), the head of the Republican Study Group, was recently interviewed on Fox News and at least converged on the alternative, calling on candidates to campaign like Donald Trump, and to address the economic crises facing working people. This isn’t the first time that Banks has echoed Trump’s call to turn the Republican Party into the party of workers.

But doing that demands an economic program which is grounded in restoring our economic sovereignty, by shutting down the Federal Reserve system, and creating the credit institutions which can rebuild our manufacturing, energy production and infrastructure. And none of that will be done unless Americans understand what Lyndon LaRouche consciously fought for his whole life--the entire British liberal system must be brought down—economically, politically, scientifically, and philosophically, and it must be replaced by a return to the principles of the Declaration of Independence and U.S. Constitution, as was done when Abraham Lincoln created the Republican Party.

Our enemies understand that. We will prevail in 2022 and 2024 when enough candidates, and American patriots generally, understand it as well.

Help us lead this fight with a donation.

Join the campaign which everyone is talking about. The one to shutter the Fed, institute American System economics, and destroy the liberal system.