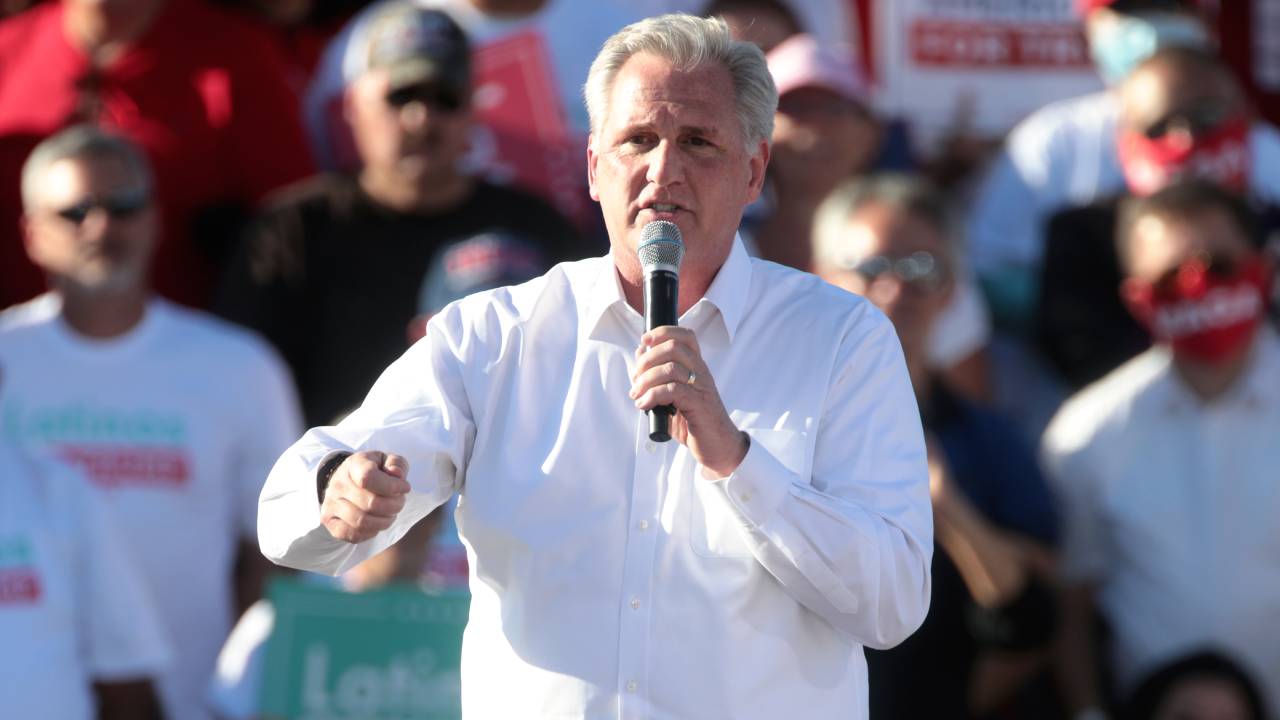 After leading his caucus last month to vote to keep Liz Cheney (R-WY) in the House leadership, House Minority Leader Kevin McCarthy (R-CA) voted last week to remove her–and quite rightly, and under President Trump’s orders. In the same way, in committee, he had supported Nancy Pelosi’s proposal for a phony bipartisan commission on the events of Jan. 6--but then turned around to oppose it when it came to the floor yesterday. Again, rightly, and under President Trump’s orders. But still...

Last week, Jim Banks (R-IN), Chairman of the House’s Republican Study Committee, said rightly that the Republican Party has become, or must become, the party of working men and women. But this week, his Committee wrote that the GOP should return to being the party of fiscal responsibility, and drew up a plan to reduce the deficit to zero in five years, including through cuts in Medicaid and raising the age of eligibility for Medicare and Social Security. Admittedly, Biden’s programs, in conjunction with the Fed, are feeding serious inflation, and seem aimed at creating a permanent subsidized underclass. But that cannot be addressed by cannibalizing the population as the country club Republican Party always did before Trump. It can only be addressed by producing our way forward, and expanding real physical goods production as Donald Trump envisioned in his proposals for massive re-industrialization.

And speaking of 2015, how can Mitt Romney still continue to make statements today? Is there any American who is a greater failure as a human being than Mitt Romney? After losing miserably to Obama and then Trump, he went to Florida after Trump was elected, to beg on his knees–in vain--for the Secretary of State position. He returned later to beg for endorsement in his Senate race. This time he got what he wanted. With Trump’s endorsement, he won that race–only to become the first Senator in US history to vote to impeach a President of his own party! And not once, but twice!

Three different cases, three different people. But all of them top officials in our government, and each illustrates a terrible problem we have as a nation. Just what were they thinking? What are they thinking now? Does anyone know? Do they themselves know? Or, put differently, how very few there are on our national scene who share this one elementary qualification for leadership with President Trump–simply that we know what he thinks. For when the stakes are down, is there any other sort of leader that can successfully lead free men and women?

To put it another way–our school-age youth are still incurring more damage than those of the chaotic school cancellations and the often farcical “distance learning.” The wearing of masks by teachers and other students deprives them of all the situational awareness they would otherwise get from their facial expressions. It can create an alien social environment or worse.

Try to see this–or not to see it–through their eyes. I recall that one of the remakes of the movie “Invasion of the Body-Snatchers,” had a scene where a baby was screaming uncontrollably, because his mother was not his mother (he insisted). She was someone else. An identical-looking imposter had been substituted for his real mother.

The movie explains that the baby appears to be suffering from “Capgras’ Syndrome.” The Capgras victim has the delusion that a familiar person has suddenly, surreptitiously been replaced by an imposter. A body-double. Often one who means to do you harm.

In this case, though, it was no delusion. The baby was right.

Now, based on COVID, these masks have become tokens of submission. As in imperial Venice, where masks were used to allow the lower and upper classes to mingle experimentally, one day a year, the visible masks donned insanely by Democrats to signal obedience, are only equaled by Washington’s Republicans, who wear no masks but continually must disguise their actual intentions, lest the population figure them out. It is well past time that citizens stop tolerating that.