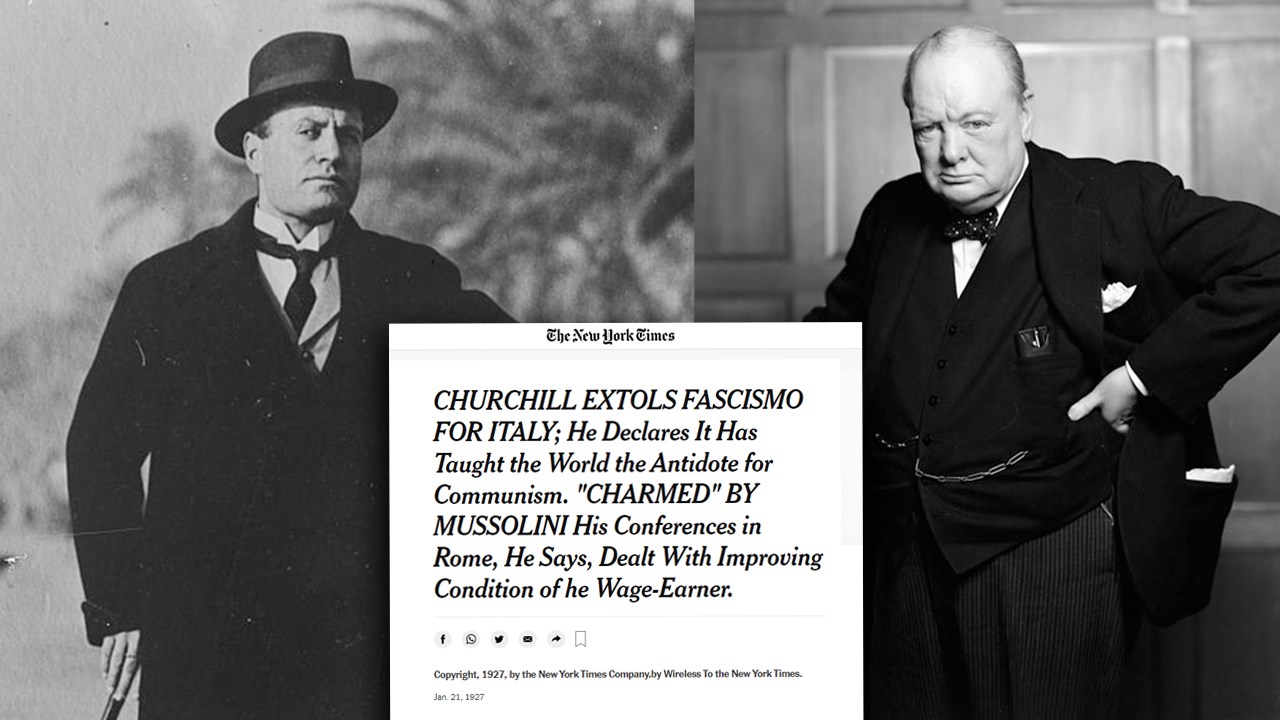 Many Americans are shocked to see how the most radical elements of the Democratic Party are joining together with America's largest corporate and financial institutions in a tight collaboration to fight against the various election integrity laws promoted in numerous state legislatures. But, as we will see, historically, this type of alliance—"leftists" aligned with large corporate interests on behalf of the establishment of a dictatorial regime—is really nothing new. In fact, it is the very essence of what were popular movements in Europe in the 1930's that went by names such as "national socialism" or "corporatist fascism".

Even though today's Trump-inspired, newly-transformed Republican Party may be carrying out a rear guard defense against this revival of European-style fascism on American soil, there is currently no conscious understanding within the Party's ranks of the true nature of the problem. This is the case even among the best of those in the Republican leadership who are proclaiming that, since the Party is now a pro-worker, multiracial coalition, it can not be cowed into submission by the threatened loss of future campaign contributions from such treacherous corporate entities. (See, for example, statements from Congressman Jim Banks and Senator Josh Hawley.

However laudable that resistance might be in the short-term, as long as the lack of understanding of the depth of the problem remains, there is little chance any long-term solution might be found. Such a desperately needed solution would necessarily hinge on the implementation of Lyndon LaRouche's Four Economic Laws, bringing the U.S. back into an American System mode of physical economy that could curb the influence of such corporatist tendencies, overall.

As part of that effort to define the problem and hence find a solution, we investigate here an historical example of this corporatist phenomena, using the little-known example of how the British Union of Fascists was formed in Great Britain in the 1930's.

The Fad of Fascism

A leading figure in the development of the fascist movement in Britain was Winston Churchill—a shocking revelation for most conservatives in America. Churchill, before he became the hero fighting fascism in World War II, publicly supported the Benito Mussolini corporatist fascist regime in Italy; and—although more subtly, through his family and social connections—he provided the inspiration for the corporatist fascist movement inside Britain itself.

In general, among the British public, there was much sentiment in support of Mussolini during the 1920's and 30's. Much less so for the Nazi regime of Adolf Hitler, which came to power in 1933. The anti-Semitic excesses and his nationalistic militaristic emphasis on the national in national socialism, meant that public figures like Churchill had to refrain from directly expressing any sympathies for him. And, of course, when the military threat against Britain itself became obvious, Churchill swung sides completely.

But before the war, Churchill had been outspoken in his enthusiasm for Mussolini, and made a highly publicized trip to Italy to meet with Il Duce, in January, 1927.

He wrote back to his wife, Clementine, on January 6th:

"This country gives the impression of discipline, order, goodwill, smiling faces. A happy strict school... The Fascists have been saluting in their impressive manner all over the place."

The New York Times of 21st January, covered the story of Churchill's trip with the headline, "Churchill Extols Fascismo; 'Charmed' by Mussolini". They report, in gushing detail, how much Churchill "admired" Mussolini's charming personality and the way that the Italian dictator could think of nothing but the good of his people. The article quotes Churchill directly from his Rome press conference congratulating the Italians on their corporatist system:

“I have heard a great deal about your new law of corporations which, I am told, directly associates twenty millions of active citizens with the State and obliges the State to undertake very direct responsibilities in regard to these dependents. Such a movement is of the deepest interest, and its results will be watched in every country. It will certainly require the utmost good will and cooperation of all the people, as well as the wise and clear guidance of the State...

"Italy has shown that there is a way of fighting the subversive forces which can rally the mass of the people, properly led, to value and wish to defend the honour and stability of civilised society. She has provided the necessary antidote to the Russian poison. Hereafter, no great nation will be unprovided with the ultimate means of protection against cancerous growths, and every responsible labour leader in every country ought to feel his feet more firmly planted in resisting levelling and reckless doctrines. The great mass of people love their country and are proud of its flag and history. They do not regard these as incompatible with a progressive advance towards social justice and economic betterment.' "

En route to Italy, Churchill had escorted his wife's teenaged first cousin, Diana Mitford, to her school in Paris. In her autobiography, A Life of Contrasts, written in 1977, Mitford wrote:

"I had to go to Paris early in January… It was kindly suggested that I might go with Randolph [Churchill's son] and his father. They were on their way to Rome to visit Mussolini, who was greatly admired by Winston."

Mitford was extremely close to the Churchill family, spending most of her summers each year at Chartwell, the Churchill manor. Not surprisingly, she remained close to Churchill even after she married Oswald Mosley, the founder of the British Union of Fascists. The couple were secretly married in October of 1936 at the home of Joseph Goebbels, the Nazi propaganda minister, with Hitler himself as one of the six guests present. When war was declared on Germany, Churchill, as prime minister, had to acquiesce to the arrest of Diana and Mosley; but he intervened to ensure that the conditions of their house arrest were quite comfortable—and that they were released promptly at the end of the war, whereupon they resumed their political campaigning straight away.

Fascism Comes from the Left

Mosley had started in political life as the "woke" leader of the League of Youth and Social Progress, promoting sexual freedom, labor demonstrations, and Irish rights. He hopped from party to party, and thrilled the founder of the socialist Fabian Society, Beatrice Webb, who exclaimed, "We have made the acquaintance of the most brilliant man in the House of Commons—Oswald Mosley."

In 1931, he and Diana founded the New Party, as the most radical branch of the Labour Party, with big corporate support: a railway baron, an automobile manufacturer, and the head of General Cinema Finance, the country's movie making industry. Within a year or two the "Party" had morphed into an explicitly corporatist fascist entity, the British Union of Fascists, with the intent of taking power through "direct action", the euphemism for rioting, a la Antifa, against police, Communists and Jews.

The organization's newspaper was called, "Blackshirt: The Patriotic Worker's Paper."

Some New Party members refused to take the leap with Mosley. One of those was MP member Harold Nicolson who said, "I think there may well be a future for the Corporate State idea in this country. But I do not think there is any possible future for direct action."

The most sophisticated writer for Mosley's multiple journals was the American bohemian poet, and the collaborator of T.S. Eliot, Ezra Pound. In a treatise called, "Jefferson and/or Mussolini: Fascism As I Have Seen It: Volitionist Economics",  Pound elaborated the pseudo-economics of corporatism, as expounded by Mosley and Mussolini.

He says that corporatism is the best way to effect Jefferson's dictum: 'government is best which governs least', explaining it with the following sleight of hand:

"You can meritoriously sigh for justice, but Mussolini has been presumably right in putting the first emphasis on having a government strong enough to get said justice. That is to say taking first the 'government' in our text and proceeding at reasonable pace toward the 'which governs least'.

"Thus with the consortium of some industry that was discussed the other day, the various powers in said industry were told to confer, and were asked to work out an agreement of quota production with no finger of government interjected. If they can't agree the government will take on the job of arranging an agreement."

Pound refuses to even admit in his treatise the historical existence of the contrary American System of economics:

"Jefferson writing to Adams (or vice versa) noted that before their time hardly anyone had bothered to think about political organization or the organization of government. Same in our time re economics. It is a new subject."

He mentions Alexander Hamilton merely as someone who did not believe that the rich must be tamed by the state:

"Hamilton didn't believe it, or at any rate both his Hebrew blood and his Scotch blood coursed violently toward the contrary view."

He dismisses the founders altogether as ignorant in economics: Washington as merely a land surveyor, and John Quincy Adams as a dabbler in the sciences:

"Washington could see mathematics from the ground end, geometry in its initial sense, measuring of the earth. Quincy Adams took it as astronomy, furthest possible removed from all human contact or human 'pollution', as I suppose all human quality may appear to a man suffering from puritanitis."

We just situate this English corporativist operation, along with the Italian, German, Spanish operations of the same era within the larger expanse of the British Empire’s aim since the days of the British East India Company and Lord Palmerston to wipe out all vestiges of the American System of economics from the globe. The truth is, in fact, that the solution to our crisis today is to reach out for that American System of economics so dismissed by the fascist Pound, to revive it and use it to transform the morale and the morals of our peoples.

Our allies in the Republican Party, and those among whatever handful of reasonable souls may be left on the Democrat side, must take a top-down approach to all the current necessary fights for "election integrity"; for "busting up" the Big Tech, media, and entertainment monopolies; and, in the larger sense, for "Making America Great Again". We must stop reacting to events as if they are occurring as things in themselves, and, instead, learn the LaRouche methodological approach to analysis of current events as current history seen through the lens of the future.