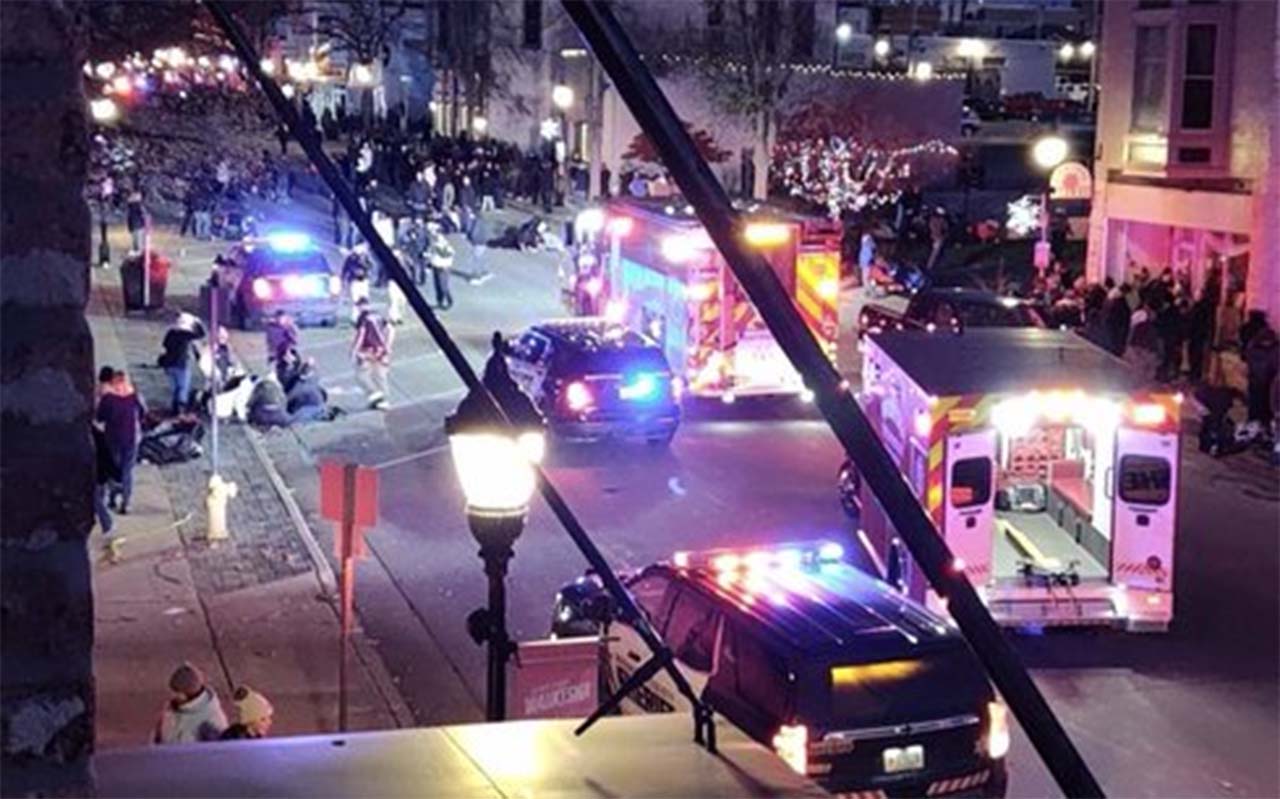 Scene at the Waukesha Massacre.

On Sunday, November 21st, a red Ford Explorer plowed at a high rate of speed through the Christmas Parade in Waukesha, Wisconsin. The attacker came from behind, so the parade participants did not even have a chance to react. Five parade participants died almost instantly, four right there in the street. As of this writing, 10 children are in Childrens' Wisconsin Hospital ICU, 6 in critical condition. Despite the attacker being almost immediately taken into custody, he was only referred to as a “person of interest” throughout the evening and early hours of this morning. As detailed below, small wonder why. In the San Francisco Bay area, over the weekend, three flash mobs conducted their Christmas shopping by totally looting, in broad daylight, high end luxury stores. Meantime, in that old consistent dependable, 9 people were murdered in weekend violence in Chicago with another 47 wounded.

Darrell E. Brooks has now been identified as the perpetrator of the attack. He is a life-long criminal who happens to be black.  He was charged today with five counts of intentional homicide. He has a 40–50-page rap sheet and had been released from jail on $1,000 in bail on November 16th after he was charged with using his vehicle to run over a woman in a domestic dispute. She was hospitalized for her injuries. https://www.jsonline.com/story/news/crime/2021/11/22/suspect-waukesha-parade-incident-identified-darrell-brooks-jr/8717524002/  The Milwaukee District Attorney’s office announced an investigation Monday morning as to why Brooks was freed on such a low bail, saying, now, that it was “inappropriate.”  A rap artist who goes by the name, Mathboi Fly, internet sleuths say Brooks’ social media accounts, now being deleted at the speed of light, include posts on the Kyle Rittenhouse case and lyrics about offing white people. Time will tell whether the sleuths’ accounts are true.

Many will see all of this weekend’s descent into anarchic murder and wanton crime as the woke reaction to the November 19th acquittal of Kyle Rittenhouse on all charges and the continuing deliberate inflammation of race relations visited upon the country by the President of the United States and his Vice-President. Both expressed anger at the 12 men and women who acquitted Rittenhouse in public statements, despite overwhelming evidence, noted by those who actually viewed the trial on television, that Rittenhouse acted in self-defense. A similar statement was released by Wisconsin Governor Tony Evers, hailing Rittenhouse’s “victims,” and stating that Wisconsin had much work to do on “equity.” Evers is the man who refused to supplement Kenosha police with the National Guard as the city burned in August of 2020 creating the anarchy in which the August 25th events involving Kyle Rittenhouse occurred.

Vaun L. Mayes a prominent BLM activist in Wisconsin, promptly declared in the aftermath of the Waukesha massacre, “The revolution has begun.” https://dailycaller.com/2021/11/22/blm-activist-wisconsin-attack-retribution-rittenhouse-verdict  Throughout the weekend, the mainstream media repeated over and over again that a white vigilante, an active shooter, Rittenhouse, had been illegally freed as the result of structural white racism. As the result of the actions of the White House, its fawning national media constituency, and the Governor of Wisconsin, people throughout the world believe that Rittenhouse shot and killed two black men for no reason. In fact, all three people Rittenhouse shot in self-defense were white.

Whether Darrell Brooks is simply a sociopath who was out of jail because of the Democrats’ general assault on the criminal justice system or whether he was triggered by the continuing tactics emanating from the Democratic race warriors, in Washington and Wisconsin, he is simply the expendable here. It is well past time that Joe Biden, Kamala Harris, and Tony Evers be held politically to account for their deliberate acts in pursuit of a race war. Like all colonial insurgency tactics employed by the British Empire, identity politics conflicts are designed to distract everyone from the actual economic looting being afflicted on both sides of the identity politics war. In the 1950s, Major General Frank Kitson pioneered this model by creating synthetic gangs and countergangs, like the Mau-Mau, all under his control, to achieve British strategic interests. In the course of Kitson’s various campaigns, genuine nationalist leaders in Africa were killed or terrorized into submission.