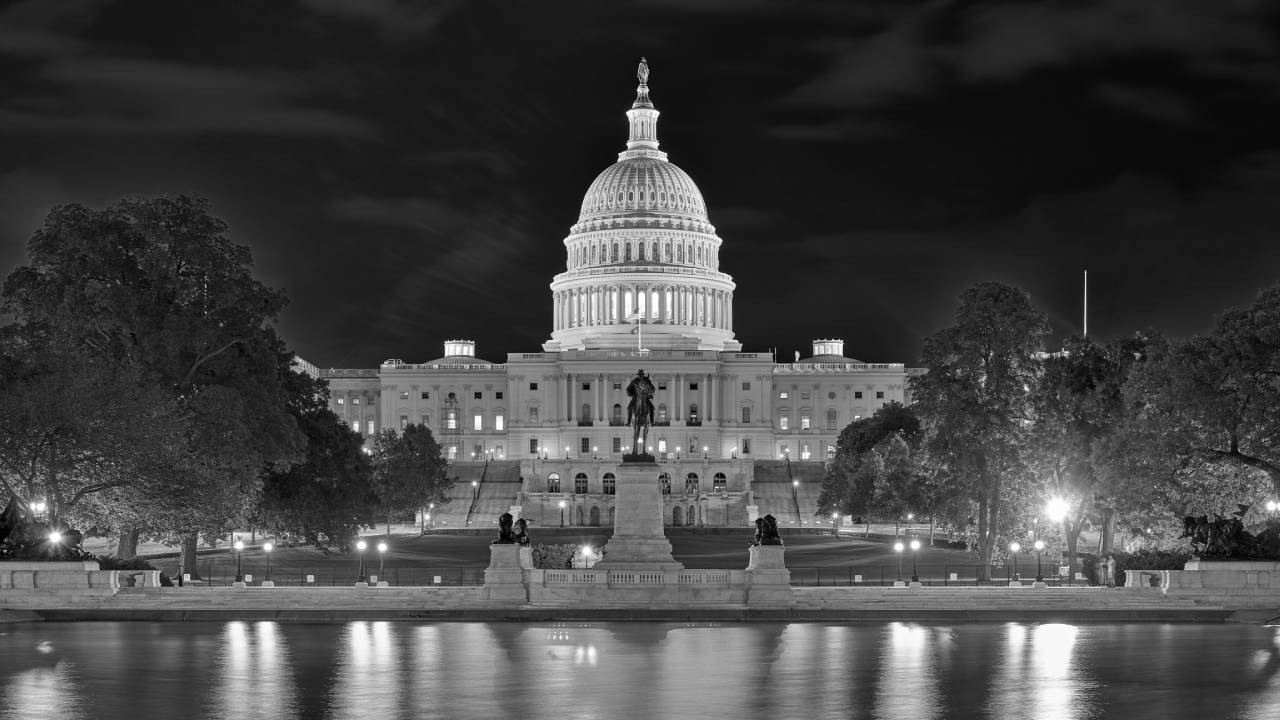 Right now, Washington, DC is overflowing with bills, reports, proposals for budgets, commissions, taskforces, leveraging of departmental resources, etc., etc. At best this is an unfocussed process of throwing money at problems instead of focusing on reality and solving real problems. At worst, as in Joe Biden’s Green New Deal, our economy will devolve much, much, further.

All of the verbosity is supposedly aimed at dealing with the long-term economic collapse of the U.S. economy, its infrastructure, and the alleged threat from an emerging and technologically advancing China, upon whom we are dependent for most physical goods production, based on a grand cheap labor scheme engineered by our very own Wall Street elite. In reality, it is our idiotic globalist elites who have tossed out everything learned from Alexander Hamilton, Abraham Lincoln, Franklin Roosevelt, and Lyndon LaRouche about how to create an economy that prospers over the course of decades.

Remember that it was the British imperialist Bertrand Russell who insisted that ways must be found to convince people by the millions that “snow is black.” So, it should be little wonder that his imperial friends and followers have succeeded in so redefining our culture and language that words which once meant something of importance, have now been rendered to mean the opposite or to be incomprehensible. For example, now:

physical economy = the study of money and money flows

forecasting = either plain extrapolation or magic

profit to one = loss to another

labor = humanoid animals who can understand and follow orders

sustainable = certain to lead to collapse

Abraham Lincoln said it was possible to fool some of the people all the time but impossible to fool all the people all the time. Lyndon LaRouche predicated his work upon this truth. Here at LaRouche PAC, we assume our readers to be among those who wish to be un-fooled, including discovering the true meaning of the words, cited above, which have been so debased. There is a dawning realization throughout the nation that it is indeed, better to be un-fooled than to go along to get along with the dictates of the modern British Empire or its World Economic Forum. In fact, our survival now depends on this.

Where Are We Going?

For starters, ask yourself, where we are intending to go? Lyndon LaRouche insisted that 50 years was a minimum time-frame for making economic decisions. Where do we want to be in 50 years? How about a U.S. population totaling well more than 400 million souls much more evenly distributed across the country among small and medium-sized cities and towns, each of which shows abundant evidence of general prosperity? No more homeless people on the streets. Cheap and abundant fission and fusion power make creation of fresh water, new industry, and artificial environments for agricultural production a relatively simple process. A national grid of Maglev rail allows for the development of the smaller cities across the country—in contrast to the airline hub system which tends to draw all businesses into one or other of the regions surrounding major hub airports. Large corporations are generally run by engineering and production people—not by financiers or MBAs—because we are making physical goods again rather than speculating on useless paper. Long-term, low-interest credit is readily available to finance people intending to start new businesses. Wages from a single full-time job are more than sufficient to pay for support of an entire family. Education is oriented more toward developing problem-solving and creative capabilities rather than manipulating systems of information. All of the above will have been driven by the spur to technological progress created in the process of building cities on the Moon and Mars with our international partners.

What Steps Do We Take Now?

In 2014, Lyndon LaRouche pointed to the urgent necessity (which is even more urgent today) of implementing his Four Laws. https://www.larouchepac.com/four-laws Let’s quickly review these measures before discussing a few additional measures required in the current situation:

Building upon Mr. LaRouche’s Four laws, additional measures will speed us toward the future we seek. Right now, interventions from speculative operations like BlackRock, Inc., one of the central arms of the international oligarchical control over the destruction of the American economy, are driving up the prices of homes and rents across the country. Restoring the graduated capital gains tax which used to penalize profits from quick turnovers of property titles, while encouraging ownership to be maintained over long periods of time, is one answer to this. By this measure, we can redirect speculative capital into productive investment.

Besides the Moon/Mars/Fusion science driver, we need to increase overall Research and Development (R&D) expenditures to the range of LaRouche’s specification of 5% of Gross National Product. Much of this will be undertaken by private industry, but the bulk of this will have to be underwritten by the Federal budget. In particular, work in optical biophysics/medicine, coherent energy beams, plasma technologies, mining, mass production of small modular fission and fusion reactors, and semiconductors should be supported. To promote this process, we must reintroduce President Kennedy’s Investment Tax Credit program: companies should be able to deduct investments in R&D and new plant and equipment from their tax bill.

What does it mean to rebuild our infrastructure, the current topic of so much ink and blather? Obviously, we must maintain what exists, but to get out of the deep hole we have dug ourselves, we must leapfrog to new platforms which raise the productive power of labor across the entire nation. We need to begin to address the serious shortfall in fresh water supplies (witness the drought now engulfing the entire West) and rail transportation. We have presented the kind of thinking necessary to solve the drought repeatedly. https://www.larouchepac.com/class_5_basics_of_physical_economy_defeating_the_mega_drought

As mentioned before, too great a reliance upon air transportation (especially since airlines were deregulated and allowed to cut off service to low-density routes) has left many a small to medium-size city cut off from too much of civilization. For example, a small city like Texarkana, Texas, only has airlines flying to and from Dallas/Fort Worth. If you are trying to start a national business from Texarkana, you probably had better move to the Dallas/Fort Worth area. This process sucks the life out of smaller cities and towns.

In a proper rail system, rail lines run through the smaller cities enroute to the larger ones. Train service is segregated between high-speed long-distance lines which run through the smaller cities and towns without stopping, and the local and regional lines which stop at all or many of the smaller municipalities. What is required is a national decision to finance and build a national high-speed Maglev network, simultaneously for freight and passenger service. The proposed East Coast superconducting repulsive Maglev system based upon the design now being deployed for commercial service in Japan should be prioritized for construction, and work should begin on the process of making a national system.

Lyndon LaRouche and other American System economists knew that the wealth of a nation resides with its people. We are suffering from shortages of labor competent to perform the tasks ahead of us. As with the mobilization associated with FDR’s depression response and the subsequent buildup for impending war, we will need to take measures which reverse the systematic destruction of American labor power over the past 50 years. As we did then, we will systematically work to move people up the productive ladder, to move unemployed people with few skills into unskilled employment, move unskilled workers into skilled employment, move skilled workers to the role of engineers, and move engineers into the role of scientists.

One model we will use is FDR’s Civilian Conservation Corps. In today’s version, we will emphasize what we call the Space CCC, which will bring in previously under- and unemployed young men and women to learn and work in various cutting-edge production environments associated with space technologies, while living in a disciplined environment.

Another, related model has been recently employed in South Korea. Under this program, the Army Corps of Engineers could induct masses of able-bodied unemployed people to be employed in “construction brigades” participating in the buildup of the projects mentioned above. Like the CCC program, this would be partially educational and partially directly productive.

It goes without saying that those with physical and mental disabilities, including addiction, must receive appropriate treatments and be housed in safe environments, no longer left living and begging in the streets.

Educational standards will need to be changed to emphasize performance of crucial experiments which prove physical principles; students should be familiarized with basic principles of modern industrial and agricultural activities with visits to enterprises and farms as well as in-classroom demonstrations by competent representatives of various industries. In high schools and junior colleges, fabrication laboratories should be set up to teach basic principles of additive manufacturing, machine tools, computer programming, etc. We recently outlined such a program in our series on education. https://www.larouchepac.com/2021_education_class_series Our object is to create citizens who can think for themselves and solve the problems they encounter.

We shall continue, as under President Trump, to work out mutually beneficial trade deals with all of our international partners, and use tariffs and incentives as necessary to protect American industry and workers from globalization. These measures, along with the measures already cited to cut off the financier control and looting of industry, will enable the United States to maintain a “full-set economy” at the forefront of technology and productive power into the long-term future.

Finally, despite our best efforts, there will still be a shortage of labor to accomplish these goals. A major part of our economic destruction has been falling birth rates as our economy and culture fail to support family formation. We must change that as well as continue to encourage legal immigration of hard-working people with ideas from across the globe. While many of these immigrants will contribute to our society, others can provide invaluable assistance back in their home countries as we become, once again, an export economy for capital-intensive goods. Appropriate levels of credit directed through the Export-Import Bank will help create new markets for our goods as we work to advance new full-set economies throughout the world.

If we do all of the above, we have nothing to fear from any other industrial economy and can escape from the decadent, devolving trap our elites have set for us. The unfocussed—at best, deliberately destructive at worst—discussions in Washington must be brought into coherence with this program if we are to navigate our way out of this mess. Will you join us in making this happen?