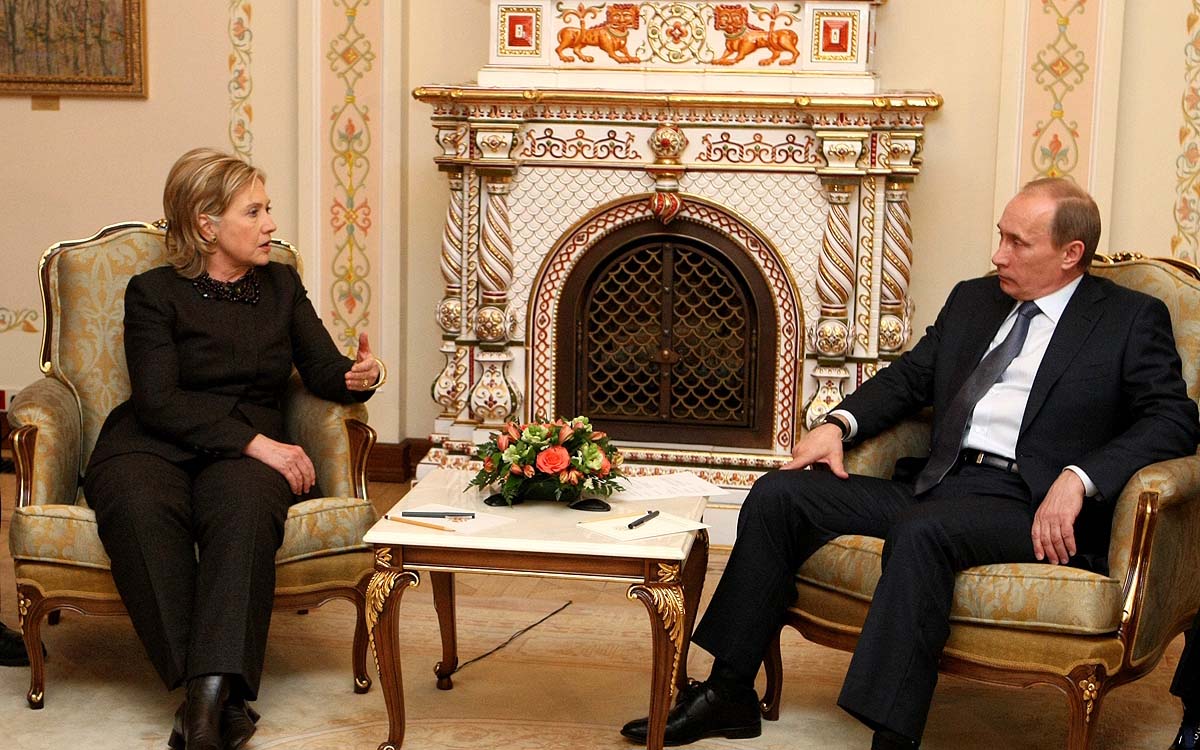 As of this writing on February 27, 2022, Vladimir Putin has just placed his nuclear deterrence force on alert based on the continued actions of NATO, the British, and the U.S. concerning Ukraine.  What he appears to be seeing is a mobilization of the West bent on the total destruction of Russia as “punishment” for its actions in Ukraine, with no other outcome to be contemplated by the British, the U.S., and NATO.  NATO, London, and the United States are also now pouring weapons into the country, further arming the population and recruiting “volunteers” internationally, insisting that Ukraine conduct a long-term insurgency against Russia.

When Ukraine’s president Zelensky broached direct negotiations between Ukraine and Russia, the U.S. State Department stepped in and told Zelensky to hold his ground and become a guerrilla warfare hero, as in the State Department’s current psyops narrative. Apparently more sensitive to the survival of his people than the demands of Ukraine’s colonial viceroys, Zelensky has reportedly agreed to talks with Russia at the Belarus border.

All of the actions of NATO, London, and Washington to date violate the two cardinal principles of warfare in the nuclear age:  always listen to your adversary and provide a real way forward within your own plan to win a just peace; never allow yourself to think for one moment that a nuclear conflict can be won without destroying most of civilization.  The same principles apply to actions short of nuclear war which pose an existential threat to a nuclear-armed nation.

A just peace obviously involves a give-and-take on both sides, as in the Kennedy/Khrushchev resolution of the Cuban Missile Crisis—the U.S. removed its offensive missiles from Turkey, and Khrushchev removed his missiles from Cuba.  Stephen Bryen, traditionally a U.S. defense hawk, has shown an appreciation of the stakes here, and we commend his analysis to our readers. He also says that peace talks are now urgent.

There is not a sound means to determine what is happening on the ground in Ukraine.  All of what is reported to Americans by their media—all of it, and particularly by Fox, but also by OAN and Newsmax—is designed to woo you into the Security State’s propaganda narrative.  That narrative is simultaneously sowing the seeds of our own nation’s destruction.  The fact that there is such a blitzkrieg in nominally Republican outlets tells you how desperate the war mongers are to disorient and demobilize the Trump MAGA base.

The current full spectrum information warfare operation is a product of Hillary Clinton’s reign at the State Department, where she hired information warfare specialist Joel Harding to perfect such operations for purposes of regime change in foreign lands.  Information warfare depends upon a pounding and emotive messaging scheme designed not to inform or even to propagandize, but to get people to react and take action.  It depends upon absolute censorship:  the blocking of access to any opposing point of view, the branding of antiwar views or pro-Russia views in the U.S. as “treasonous,” and the doxing or wiping of such views (and holders of such views) completely off the internet.

Harding’s techniques were perfected in the U.S./British 2014 coup in Ukraine which overthrew its duly elected government.  Harding served there as a “consultant.”  These techniques were then turned on the United States when Donald Trump began his campaign for the Presidency, were at the heart of Russiagate, and have continued here since that time.  And as Glenn Greenwald notes in a piece published about war propaganda today, no propaganda is as powerful as war propaganda in promoting the irrational—something which is very, very dangerous in a nuclear war context.

In this information warfare regime, fake stories are not the exception.  They are the rule.  For example, for days, U.S. media and social media have featured an alleged fight to the death by Ukrainian border guards on Snake Island.  According to the “narrative” the Ukrainian soldiers, confronted by a Russian ship and told to surrender said, “Go F—k Yourself” and were promptly mowed down by Russian bullets.  President Zelensky awarded the 13 allegedly dead border guards the highest military honors.  But, it turns out, the 13 guards had indeed surrendered and were escorted home by the Russians, despite the histrionics of the Washington Post.

As part of the current propaganda offensive, Facebook suspended its ban on praise of the neo-Nazi Ukrainian Azov Battalion to the extent that they are now fighting for Ukrainian freedom.

We covered the details of full-spectrum information warfare emergent from Ukraine in depth in our coverage of President Trump’s first impeachment trial—the one involving his search for documentation of Ukrainian involvement in the coup being run against him by Hillary Clinton, Obama, the British et al., his questioning of the continued arming of Ukraine for hybrid war with Russia, and his questioning about Joe Biden’s corrupt dealings in Ukraine. If you recall, we said there that Trump had touched the third rail of the coup plotters’ cover-up in his now famous call with President Zelensky—necessitating the coup plotters’ response with their phony impeachment proceedings.

The delusional belief that narratives, not reality, determine war and peace, now totally engulfs the Biden Administration and, particularly, its main inspiration—the British military.  Here is Deputy National Security Advisor Daleep Singh in a briefing just last week:  “In this century, strategic power is increasingly measured and exercised by economic strength, by technological sophistication and your story—who you are, what your values are; can you attract ideas, and talent, and good will?  And on each of these measures, this will be a failure for Russia.”  In other words, wars are won and lost not by logistics in depth and the character of the population, but by the type of PR tactics Silicon Valley wannabes engage in concerning startups.  Throughout history the inability to distinguish between reality and your own propaganda has resulted in strategic and military disasters.  Witness our own forever wars.

This cult-like belief system is exactly what leads to destruction of nations.  Take for example, the “nuclear” sanction of barring Russia from the SWIFT financial system now underway—which Washington’s loud mouth know-nothing Republicans are so passionate about.  More likely than not, this will lead to de-dollarization by Russia, China, India, and others. But the strength of the dollar in our debt-driven economy depends upon its being the world’s reserve currency.  Its devaluation as major portions of the world start to use alternative systems, now already in place, will incinerate our economy.

Twenty-four hours a day now this David vs. Goliath theme is being pounded at the American people:  “The hero underdog, the comic and common man Zelensky and the Ukrainian people fight with small rifles for freedom and democracy against overwhelming odds and the overwhelming forces of the brutal Russian autocrat.  They are making progress and bogging Putin down against all odds.  They are ready to fight an extended insurgency for their sovereignty and freedom.”

How exquisitely designed to appeal to the American psyche by those who would control them.  And, how absolutely fake and hypocritical when you remind yourself that the globalist conspirators propounding this narrative are the same people who conducted the soft coup and stolen election that drove Donald Trump from office; who have deliberately opened our own southern border; who run the out-of-control Biden Justice Department and perception-managing Silicon Valley (now bent on persecuting dissent and destroying the millions in revolt against them); and, in all probability, who orchestrated Canada’s Emergency Act mobilization that crushed peaceful truckers protesting vaccine mandates as an experiment for what they intend here.

These are the same people who set the people of Ukraine up for slaughter in 2014 when they ran the coup with the specific intent of turning the entire country into a hybrid-warfare platform against Russia.  As Congressman Adam Schiff so eloquently put it in 2020, the U.S. “uses” Ukraine to fight Russia “over there.” Since the 2014 coup, Ukraine has been economically looted and devastated—its citizens suffering all the mental damage of colonial occupation and a perpetual war in its formerly prosperous Donbas region, while its economy has been left completely dependent on billions of dollars in U.S. and other NATO aid.  Indeed, the Los Angeles Times reported on Friday that the CIA has been training the Ukrainians for a prolonged insurgency against Russia since 2015.

Russia, for its part, is not engaged in the epic level of information warfare and PR now dominating the West, and some argue that this is its disadvantage.  It waits until the outcome of battles to declare them, and continues to insist that it is out to limit civilian casualties while destroying Ukraine’s military infrastructure and destroying, or bringing to justice, those neo-Nazi elements of the Ukrainian military, who engaged in war crimes against Russian speakers in the Donbas region of Ukraine, Odessa, and elsewhere from 2014 forward.  If that is true (noting that we are unable to evaluate such claims against actual battle reports), there is much reason to doubt that the Russians will involve themselves heavily in urban warfare in Kiev or other major cities—no matter how much the urban warfare narrative is spun to the American people.