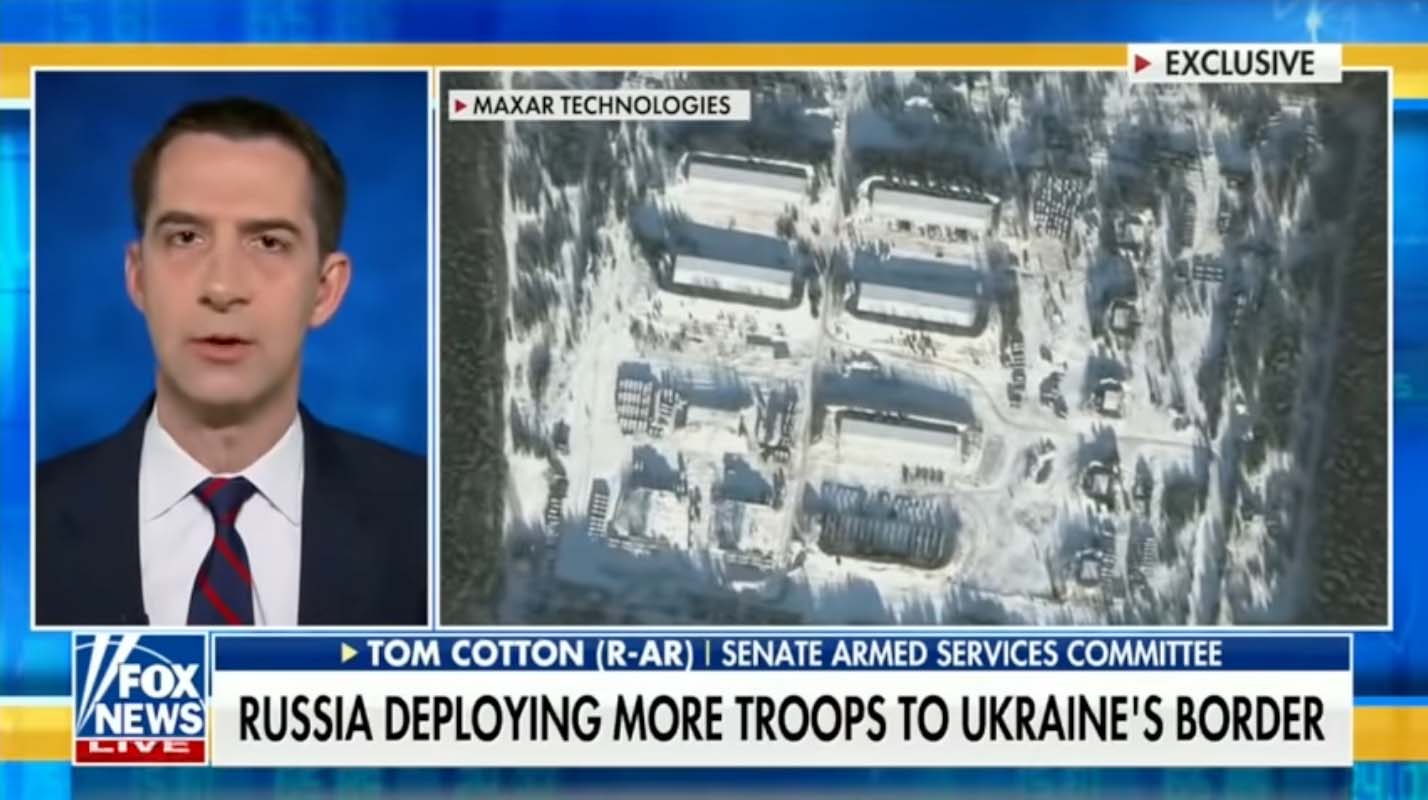 The Sunday-talking-heads shows of January 23rd, were filled with war fever and outright delusional psychosis—all about how we have to stand our ground to protect Ukraine against the evil Vladimir Putin who is about to pillage the place and slaughter all of its innocents.  We have to begin preparing our young men and women to fight there if necessary, the pundits insisted, in a hot propaganda drive with all the cultivated intensity of the run-up to the Iraq war.

The Republican Senators and actual enemies of Donald Trump, the neo-Con war mongers, Mike Pompeo and Sen. Tom Cotton, appearing on Fox News Sunday were absolutely rabid, saying that Joe Biden had sold all of us out by suggesting that there were any alternatives to a war to protect Ukraine from Putin.  Every Republican appearing in the national media echoed these insane talking points.

But is all this crazy talk really aimed at Russia?  More and more it appears desperate, directed at the American people who are in open revolt against the elites, including Washington’s Republicans, who have so misled them.  Nothing the elites have tried to sell –catastrophic climate change, mandates, January 6th as an insurrection—is sticking.  Tried and true, a war, maybe even a little war, might possibly rally the population back to them.  Maybe something like a repeat of 9/11.  Trump’s MAGA base is, nothing, after all, if not patriotic.

Since the hysteria around Ukraine began, there have been multiple attempts to enlist Donald Trump in the madness.  The best they got was the statement from Sen. Lindsey Graham on Hannity last week that Trump said that relations with Russia had been so messed up by Biden that it might be impossible to salvage them in the near term. But, as always, Trump is for salvaging them.

On Saturday evening, Vice-Admiral Kay-Achim Schönbach, the head of the German navy, was forced to resign simply for speaking the truth: that all the talk of a Russian invasion of Ukraine was “nonsense.”  In a speech to a forum in New Delhi on Friday, he said that Russia was merely seeking “respect” for its security concerns in Europe and that it would be well for the armchair warriors in Washington and London to recognize that Crimea is gone and has been since 2014.

The forced resignation highlighted the fact that both the French and the Germans are resisting provoking a European war with Russia over Ukraine and have been resisting despite all the poppycock about allied unity.  It’s the Brits and Washington’s war party who are pushing this and the more France and Germany resist the more hysterical they become.

This dynamic was fully at play in the Sunday afternoon ravings of Congressman Darrell Issa on Fox.  According to Issa’s deranged view, we know from history that if the United States does not threaten war over Ukraine, the Europeans will not stand up to the Putin menace, just like they folded in the lead-up to World War II.  They will continue to want Russian natural gas to stave off what is sure to be a cruel European winter.  Believe it or not, that was what Issa actually said.  As a side note, since when do we have the right to dictate the energy policies of Europe?

In the meantime, straight from Britain’s foreign office—you know, the people who invented the myth about Saddam Hussein having weapons of mass destruction—we are told that Britain’s stealthy spies have uncovered a plot to install a pro-Russian government in Ukraine.  Saluting this nonsense, Biden’s National Security minions say this is “deeply concerning.”  No one, as usual, bothers to cite any fact which might support this assertion, other than the apparent fact that there are lots of minor politicos in Ukraine who might have connections to Russian intelligence.

So, we reiterate once again here some simple hard facts—things you should know and master before Washington’s deluded get us into another unnecessary war, this one involving a targeted adversary with a modern army and nuclear arms.

(1).  When the Soviet Union collapsed, the George H. W. Bush Administration told Moscow that NATO expansion was off the table for the former Soviet republics, as part of the bargaining for a peaceful resolution of the entire event.

(2).  Ukraine was once the hub of major industry and scientific exploration.  After the George Bush Administration’s neo-Cons declared the “end of history” with the collapse of the Soviet Union, the entire Soviet bloc was looted as part of western economic “shock therapy,” it’s human and physical assets degraded and sold. Beginning in 1989 with Czechoslovakia, the National Endowment for Democracy, British intelligence, the State Department, and the NGOs controlled by the likes of George Soros began a series of color revolutions or coups throughout the former Soviet bloc, seeking to replace politicians favorable to Russia with those favorable to them.  With Putin’s ascension to leadership in 1999, these color revolutions were directed at regime change in Russia itself.

(3).  Two color revolutions were done in Ukraine, the Orange Revolution in 2004 and the so-called “Revolution of Dignity” in 2014.  As a result, Ukraine is now the most corrupt and economically bankrupt nation in Europe, its intelligentsia having largely emigrated.   There is absolutely no reason for Russia to want to conquer this basket case and absorb it—in fact Russia wants nothing to do with such madness.

(4).  The 2014 coup ousted the duly-elected President of Ukraine, Viktor Yanukovych and replaced his government with one dictated by the U.S. State Department’s Victoria Nuland, various National Endowment for Democracy operatives, and outright neo-Nazis who play the major role in the Ukrainian defense forces.  Joe Biden served as the Obama Administration’s viceroy to this now colonial satrap, which is how Hunter Biden was able to profit from the country’s  corruption.

(5).  The Obama Administration’s puppet Kyiv regime launched an ethnic cleansing campaign against the inhabitants of Eastern Ukraine, known as the Donbass and inhabited historically by those of Russian ancestry and Russian citizens, while the citizens of Crimea voted to align themselves with Russia rather than Kyiv. It was the intention of the U.S./British authors of the coup to use Ukraine as a platform for hybrid warfare operations against Russia itself, and it has been so utilized.  So far, Kyiv’s campaign against the Donbass and the resistance of its inhabitants to Kyiv has resulted in a frozen war with over 13,000 dead.  In recent elections, the Kyiv regime proved wildly unpopular with a tenuous claim for continued rule.

(6).  When Donald Trump questioned why the Washington, D.C.’s uniparty was providing lethal weaponry to Ukraine and asking about the role of the Ukrainian intelligence services in the ongoing Russiagate coup against him, the entirety of Washington’s Deep State went into overdrive, resulting in Trump’s impeachment.  All the State Department operatives who testified at Trump’s impeachment proceedings were authors of the color revolution strategy against Russia.  All of them, along with major portions of Washington’s defense industry, are dependent on the huge subsidies Congress hands out for Washington’s forever wars.  The Senators and Congressmen who support this are rewarded in turn with kicked-back campaign contributions.

(7).  The lethal weaponry now being provided to Ukraine, (over protests from France and Germany) will be put into the hands of actual neo-Nazis, very much like the fateful decision by the mad Zbigniew Brzezinski to arm the jihadists in Afghanistan in order to defeat the Russians there, setting off the series of disasters which culminated in the carnage of September 11, 2001.

(8).  Sane analysts know that Putin does not want Ukraine and that the imagined war being portrayed by the United States and Britain will never take place. The only reason Russia will go into Ukraine is if it is provoked by some atrocity in the Donbass.  Rather, Russia is seeking a new security architecture in which its borders are not facing countries engaged in hybrid war against the Russian state.  Were Russia or someone we otherwise deem hostile right on our borders and engaged in hostilities against us, we would demand the same.  The U.S. also has no answer for Russia’s modern hypersonics or modern weapons systems.  All of the war games conducted by the U.S. and its allies show that in any confrontation with Russia in Europe, NATO and the U.S. would lose decisively.

(9).  There are multiple reports of discussions seeking an off-ramp from the present insanity and multiple reports that the U.S. security establishment is actually deeply split on the matter.  The problem is the insanity and imperial hubris infecting the Anglo-American elites, a hubris which refuses to face military and strategic realities.  Some of those who recognize that the U.S. and the British cannot prevail in a conventional war argue that this only means nuclear weapons should be on the table.

There is one sure way to halt the insanity.  The American people must mobilize now to stop it.  Engage with Russia, as Donald Trump said.  Defeat the Deep State war mongers who have destroyed our nation.  If that requires electing an entirely new U.S. Senate, so be it.  Call your Senators and Congressman at 202-224-3121.  Tell them, stop the lying.  It’s time to cut it out about right now. We will not allow young Americans to be sacrificed for your corruption and imperial fantasies any longer.