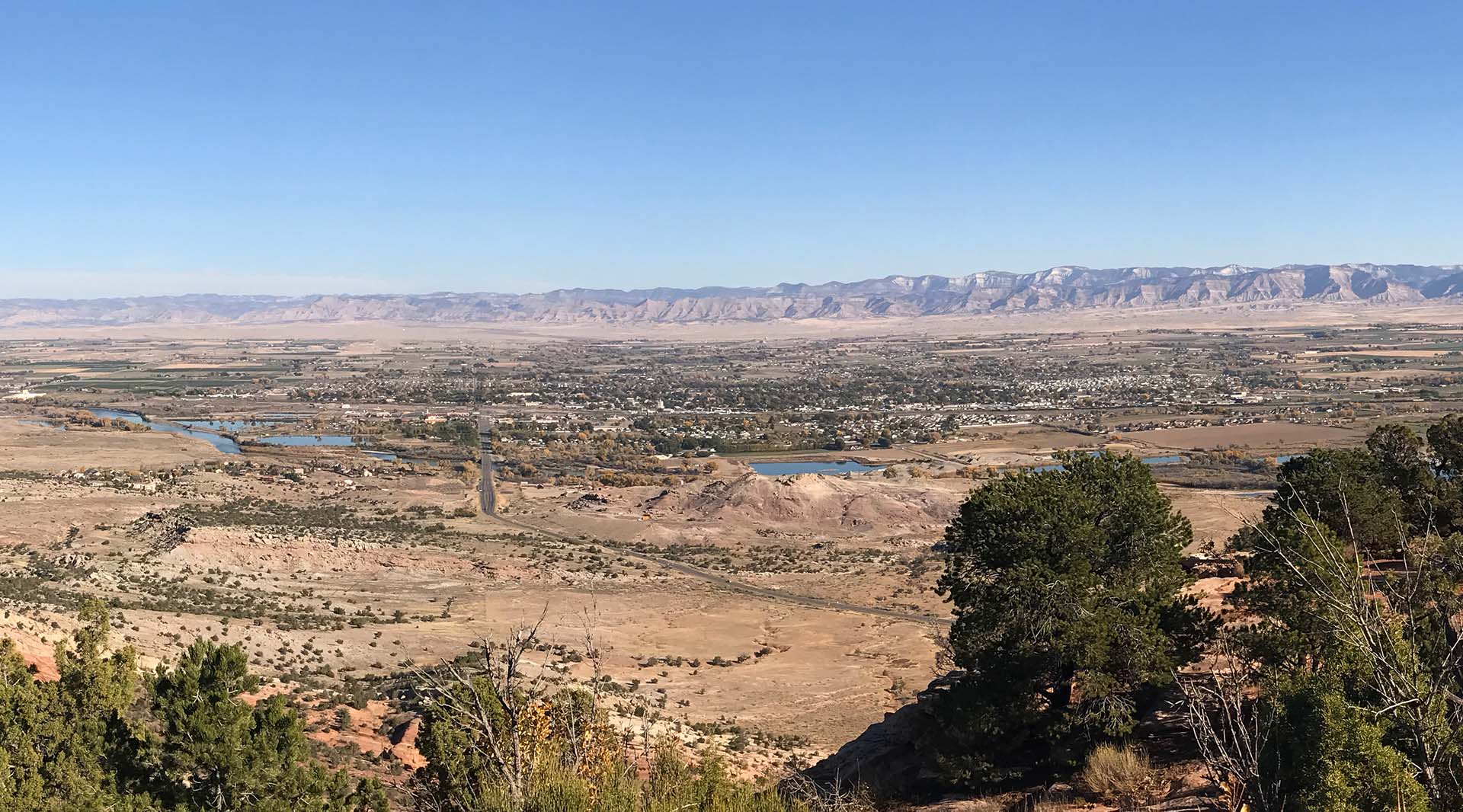 A view from the back of the visitor's center at the Colorado National Monument. 2016. Photo: Cerahammond / wikimedia / Creative Commons Attribution-Share Alike 4.0 International

Traveling by air across Colorado to Grand Junction on the Western Slope of the Rockies, the visitor from the eastern United States takes in two impressive sights: the steep, snow-capped mountains and the other-worldly, almost lunar aspect of the high desert plain. There, the only break in the beige landscape is the green, irrigated—often circular—cropland.  And, therein, lies the source of many problems, many disputes, but, also, many opportunities to change the face of agriculture in the desert.

The Grand Valley is just one of many areas in a seven-state region that relies on the Colorado River system for water. Farmers and ranchers irrigate more than 3 million acres of farmland in those states. In 2000, the reservoir system in the Colorado River basin was 95 percent full; as of the fall of 2021, the reservoirs were at 39 percent. As the water crisis unfolds, the demands of urban areas take precedence over agriculture. Some even suggest taking land out of farming in order to conserve water.

While in the Grand Valley recently, we had the opportunity to speak with two brothers who, with another relative, farm approximately 800 acres, crop, and cattle. As they point out, leaving cropland fallow or even allowing bare soil with no plants growing is a waste of the abundance of sunshine available in this area each day. They propose an alternative: crop and graze the land in such a way that the land is itself improved and, as a result, uses less water.

These farmers employ a technique termed regenerative agriculture, which focuses on six principles:

We looked at one field that had been no-till seeded with a cover crop including turnips and cold-weather greens. A number of weaned calves were grazing. It happened to be across the road from an uncultivated field of desert with sagebrush.  We inspected a shovel-full of dirt: it was a dark brown, teeming with earthworms, roots, and beneficial fungus. These farmers use in-furrow irrigation of water from the Colorado River, but they strongly believe that, since adopting the regenerative agriculture approach, they have decreased their water usage by 10 percent. They have asked the University of Colorado to measure the inflow of irrigation water and rain less the outflow of water not used.  And, with that proof of principal, our young farmers hope to convince their fellow ranchers and farmers to adopt these techniques.

This model of regenerative agriculture is very similar to what Lyndon LaRouche proposed over many years for the greening of the deserts in Africa and elsewhere. He was committed to stopping the desertification of vast tracts of arable land and making these deserts bloom. We can imagine Mr. LaRouche looking upon this creative solution to a difficult problem in the high plains desert of the United States and being immensely pleased.