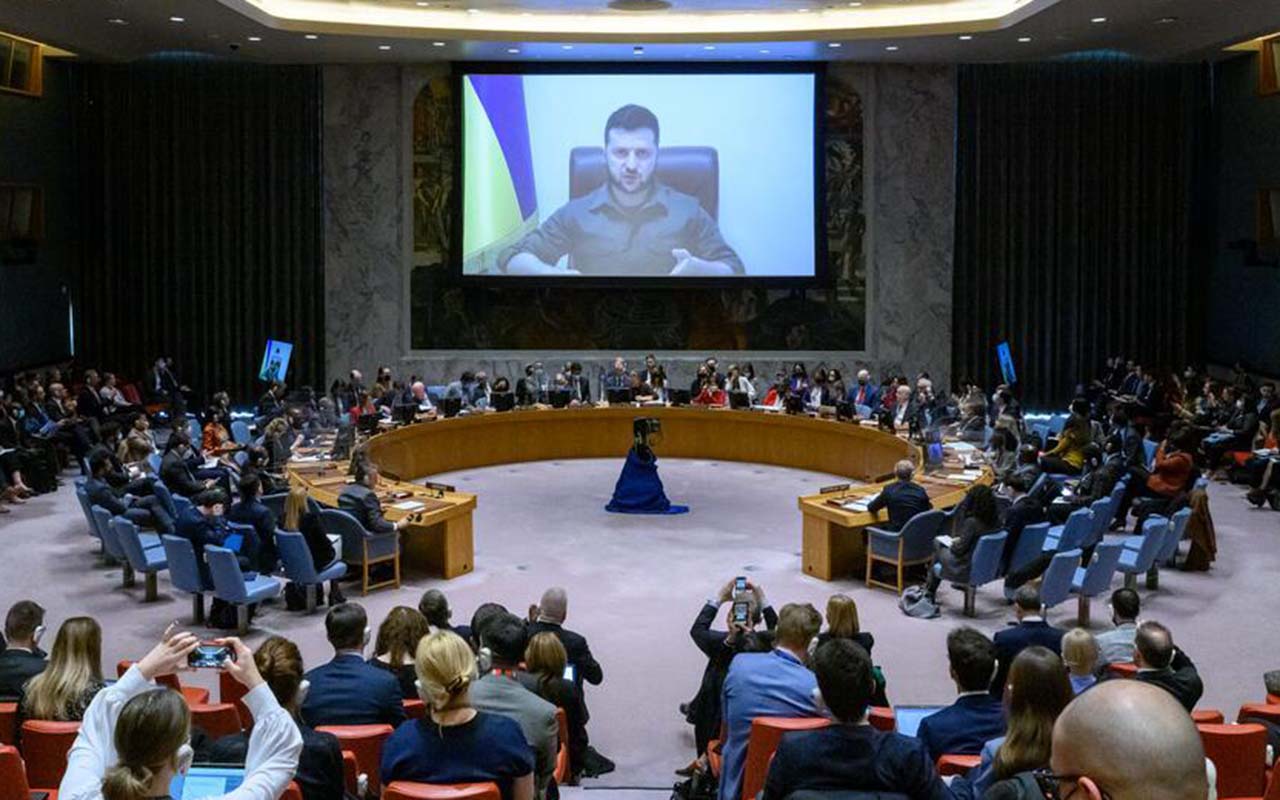 Volodymyr Zelenskyy (on screen), President of Ukraine, addresses the Security Council meeting on the situation in Ukraine. 04/05/2022 (UN Photo/Loey Felipe)

Over the last week, the U.S. and the British have openly stated what has been apparent all along--that their war in Ukraine is a proxy war against Russia. After visiting Kiev and announcing the shipment of U.S. heavy weapons to Ukraine, Secretary of Defense Austin announced that the U.S. goal in Ukraine is not to seek a peace settlement, but “to weaken Russia so that it can’t do the kind of things it has done in invading Ukraine.” On Tuesday, British Armed Forces Minister James Heappy authorized Ukrainians to use weapons supplied by Britain to carry out military strikes inside Russia itself. And on the same day, U.S. intelligence officials revealed publicly what everyone already knew--that the U.S. has been providing real-time intelligence to Ukraine to assist Ukraine in killing Russians.

Predictably, for anyone not in the fantasy world of Austin, Blinken, Milley and Heappy, the Russians reacted forcefully. Russian Foreign Minister Sergei Lavrov said that Russia is now in a proxy war with NATO, and warned that the risk of nuclear war cannot be underestimated. Speaking to the Russian Parliament, President Putin warned, “If someone decides to intervene in the ongoing events from the outside and create unacceptable strategic threats to us, they should know that our response to those oncoming blows will be swift, lightning-fast. We have all the tools to do this. Tools that no one except us can brag about. But we’re not going to brag. We’ll use them if such a need arises.”

U.S. officials could only respond by saying that the Russians should watch their mouths, while comedian Zelenskyy demanded that Russian nuclear weapons should be put under international control.

Russia backed up its words with action, striking railroad junctions in western Ukraine on which the U.S. heavy weapons are transported, just hours after Blinken and Austin had travelled on those same rail lines. Russian forces continue to methodically take control from the Donbass to Crimea, surrounding the Ukrainian forces in the southeast and beginning operations around Odessa.

Meanwhile, the vaunted sanctions on Russia, while damaging to the Russian economy, have had a devastating effect on the economies of the U.S., Europe, and especially the developing sector. The ruble is now higher than it was before the start of the war, and many of Russia’s trading partners are continuing to do business with Russia.

Like all the disastrous wars the British and their neo-lib and neo-conservative allies in the U.S. have started over the recent decades, the war in Ukraine is completely unnecessary, will not produce the results the British and American neocons dream of, and will only devastate the people for whom it is supposedly being fought. The only winners are the beneficiaries of the military-industrial-think tank complex from whose trough Blinken, Austin and the Biden family have generously gorged themselves. After replacing the $85 billion in weapons Biden abandoned in Afghanistan last year, the military-industrial complex will further enrich itself and its supporters by replacing the billions in arms he is now sending to Ukraine.

At no point has anyone in the Biden or British governments explained how a war with Russia is in the U.S. national interest, or would benefit Ukraine, which has seen almost 20% of its population flee, perhaps never to return, and much of its economic infrastructure destroyed. Ukraine now says it needs $7 billion per month to meet its immediate economic needs, of which $2 billion is supposed to come from U.S. taxpayers.

None of this would have happened had the U.S. not insisted on Ukraine’s right to join NATO--which everyone agreed was never going to happen anyway--had it been committed to implementing the Minsk accords, and had it seriously engaged Russia on its legitimate security concerns.

Despite the fact that more than 75% of Americans, according to recent polling, don’t think the U.S. should be involved in a war in Ukraine, all the Democrats and almost all of the Republicans in Congress are enthusiastically supporting the recklessness of the Biden administration. A partial exception is U.S. Senator Rand Paul, who confronted Blinken at a hearing on Tuesday, saying that the U.S. should not have provoked Russia by encouraging Ukraine’s NATO aspirations. In response, Blinken insisted that Ukraine has the right to determine its alliances. But Senator Paul left it at that, failing to follow up with the obvious question: “Is this worth a nuclear war?”

Rather than wasting billions fighting Russia at the risk of nuclear war, the US must ensure immediate peace negotiations to rapidly end the fighting, as President Trump said last week.