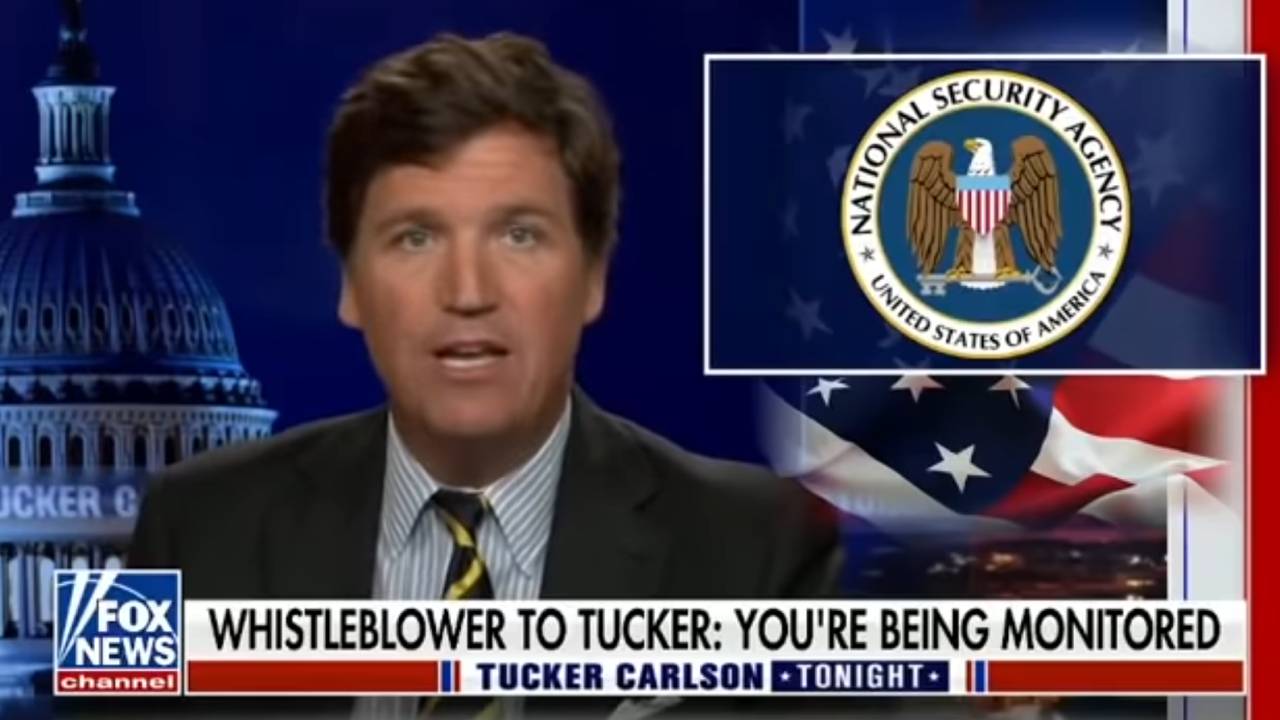 On Tucker Carlson’s Monday, June 28th show, he blew up an NSA surveillance scandal which should result in a flood of calls into Congress demanding investigation and the jailing of everyone involved. Right now. Not later. NSA spying against Americans remains illegal. It is not a technical foul, particularly when directed at journalists opposing the hologram Presidency.

The target of the NSA, as demonstrated by Carlson, is Tucker Carlson and anyone else opposing the present Biden regime. Carlson is a journalist with the highest rated show on cable television. The reason for this rating is that Carlson, a conservative, is not afraid to highlight and discuss critical topics, such as war and peace, with nominally left journalists who also oppose the present regime. Last week Carlson apparently crossed all lines of Washington, D.C. swamp decency when he referred to the Chairman of the Joint Chiefs, General Mark Milley, as “stupid” and a “pig.”

On Monday, Carlson recounted that he was called by a whistleblower who is an NSA employee or contractor. That person told Carlson that Carlson is the target of NSA surveillance. To prove his point, the whistleblower then detailed emails and texts about a story Carlson is working on currently which could only have come from Carlson’s personal devices. Carlson noted, appropriately, that if he can be gone after illegally, numerous American citizens without his status are undoubtedly being targeted in similar completely illegal fashion.

During the same show, Carlson revealed that he had spoken to FBI agents over the weekend. They told him that the current claim by the Avatar Biden, Christopher Wray, General Milley, and the “whole of government” that white supremacy is the leading “lethal” threat to this nation is utter bullshit.

According to Carlson’s FBI sources, the FBI white supremacy grouplet in the FBI’s domestic terror section was almost abolished prior to Biden because there were so few violent incidents involving white supremacists that its costs and agent time could not be justified. The reality is, however, that this fictitious “threat” is the fig leaf for turning the surveillance powers of the government, illegally, against those who dissent. Carlson’s frequent guest, Glenn Greenwald, just wrote an excellent piece about this.

Think about Avatar Biden’s ridiculous ravings last week about how you can’t overthrow the government if you don’t have nuclear weapons and F15s and the appropriate satirical response by the widely read Babylon Bee: “Huge Spike In Americans Buying F-15s After Biden Suggests You'll Need Them To Overthrow Government.” Actually, as recent U.S. invasions of foreign lands have shown, patriots determined to save their own country will, through their determined resistance, overcome even vastly superior armaments, at whatever cost or sacrifice.

Tucker Carlson, telling some of the truth, has caused some people to take enormous risks because they share that sentiment. They should be backed by a full popular onslaught demanding, not asking, that the Congress finally support the Constitution and bring the criminals in the intelligence community to justice.