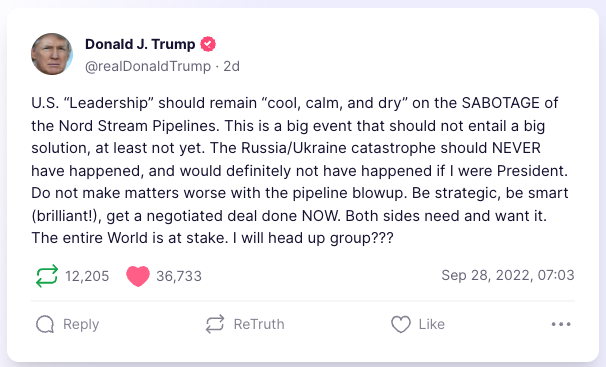 The sabotage of the Nordstream pipelines, carrying Russian natural gas to Europe, represents a dangerous escalation of the war the U.S., NATO, and Britain are waging against Russia, utilizing the population and country of Ukraine as so much cannon fodder. The populations of Germany and other nations formerly dependent on Russian natural gas for their economies are now scheduled to join the Ukrainians on the sacrificial altar as winter approaches and their economies shut down. All the informed speculation points to Poland as the source of this escalation, operating with U.S., British, and NATO complicity.

President Donald Trump rightly says on Truth Social that this escalation can and will lead to nuclear war unless stopped. He has volunteered to mediate a settlement of the war. Trump alone, among major U.S. political leaders has called repeatedly for ending the war, noting that Vladimir Putin has been dangerously mishandled and the war would never have happened if Trump were still in the White House. Ending the war on Russia now can and must become the decisive demand determining the U.S. midterm elections. Put differently, if you can’t figure out how to not blow up the world, how can you possibly be deemed competent to hold public office?

There are now four reported leaks in the Russian Nordsteam I and II pipelines caused by explosions in the Baltic Sea portion of the lines. The explosions were seismically recorded on Monday. The leaks cannot be repaired before Winter hits Germany and other European economies dependent on cheap Russian gas and already suffering from the impact of the onrushing global economic crisis.  Two leading triggers in the onrushing economic collapse are the insane attempts to implement the Green agenda and the war against Russia and its vital energy and other material contributions to the world economy.  This follows years of financialization and deindustrialization in the advanced economies.

The assembled evidence and historical context eliminate Russia and Germany as possible suspects in the Nordstream sabotage, despite lunatic posturing blaming Russia from the British, the Ukrainians, and the United States. John Helmer over at Dancing with Bears has assembled the evidence pointing to the Poles as the source of the Nordstream explosions, including their failed 2021 attempt to blow up Nordstream, their historic hatred of both Germany and Russia, and their over-the-top support for the current war. It is persuasive and well worth the read.

We are currently witnessing widespread and escalating opposition to NATO’s war taking place throughout Europe.  Demonstrations against the war and its accompanying green genocide policy for Europe’s coming winter have broken out throughout the continent, numbering in the hundreds of thousands of participants.

In the United States, a news blackout on this resistance to the war, along with brutal repression flowing from the FBI and other security state agents, currently stands in the way of making Trump’s call for an immediate end to this death march a reality. The repressive measures are designed to make citizens believe they are alone and impotent, when, in fact, Trump’s articulation of the problem is shared by the majority of the population who are now stepping forward to be mobilized.

LaRouche PAC teams in direct contact with the population and door knocking in battleground states, or even in states considered to be “behind enemy lines” like California and New Mexico, are reporting a sea change against the war.  Despite this, the U.S. Congress has just approved a request by the Biden Administration for $12.3 billion more in U.S. funding to the Zelensky regime in Kiev, to escalate the march toward mass death. That brings the total to $67 billion, not exactly chump change when you consider, for example, that it dwarfs the amount ($39 billion) for all of U.S. drug enforcement.  Fentanyl currently floods the country and is poisoning and killing the working population and our youth, yet Biden and the Congressional leaders agree that saving Ukraine, the most corrupt nation in Europe, under the fake slogan of “democracy versus autocracy,” is more important.

Perhaps it is the dawning realization that the present U.S. regime is out to kill them that has spurred thousands of newly mobilized citizens in the U.S., most of whom never acted politically before, to step forward, knock on doors and talk to their neighbors and to run for public office. These citizens are organizing for complete and sweeping changes in our nation.  Washington’s Uniparty, working from their fix palette of polled and acceptable “issues” can’t imagine this is even happening, let alone contain it.

Some Relevant Analysis and History

In an interview with OAN’s Dan Ball on Wednesday, Colonel Doug Macgregor was precise and to the point, as usual. We urge you to watch the full OAN clip, inclusive of the videos featuring Joe Biden and Victoria Nuland vowing to destroy Nordstream back in February, before Russia started its Special Military Operation in Ukraine.  Macgregor points out that by participating in the destruction of the pipeline, the U.S. has usurped the sovereignty of Germany.  It is very clear that in recent weeks significant German political factions have been entertaining the possibility of pulling support for the Ukraine war and returning to the use of Russian gas to salvage a sinking economy.  With the sabotage of Nord Stream that option no longer exists.

Ukraine, despite massive propaganda to the contrary, is losing this war, and it could never win based on the actual correlation of forces. Ukrainian President Zelensky is now threatening the use of dirty uranium bombs in a desperate attempt to stop further Russian advances. The current Russian military mobilization, Macgregor says, is the largest of any country since World War II and is intended to accomplish something “very big.”   Does anyone think we can afford to wait it out, and see what Russia’s move is, before upending Washington’s delusions and ending the war by mandate of the U.S. population?

In watching the OAN clip, just look at the smirk on senile Joe’s face when he assures a reporter that he will take Nordstream out. Biden’s sidekick, Victoria Nuland, is of course, the neo-con menace and former aid to Dick Cheney who, with then Vice-President Joe Biden, case officered the 2014 U.S./British coup in Ukraine which set the stage for the present war.  Nuland, presently handling the Ukraine war for the Biden Administration and the State Department, is married to the neo-con pater familias, Robert Kagan. Kagan has played a leading role in every U.S. genocidal foreign disaster since 9/11.  It was Donald Trump who disrupted this corrupt path of forever wars and permanent revolution. In 2019, Kagan teamed with current Secretary of State Antony Blinken to articulate their deluded version of a New American Century.  That piece, which entirely laid out Biden’s current insane foreign policy agenda, should have ended any illusions that there are differences in the Washington regime’s Republican and Democratic Party foreign policy camps.

To the great consternation of the Biden collective, however, the American people remain, with Trump, adamantly opposed to the war insanity.  We now need to stop this death march once and for all.