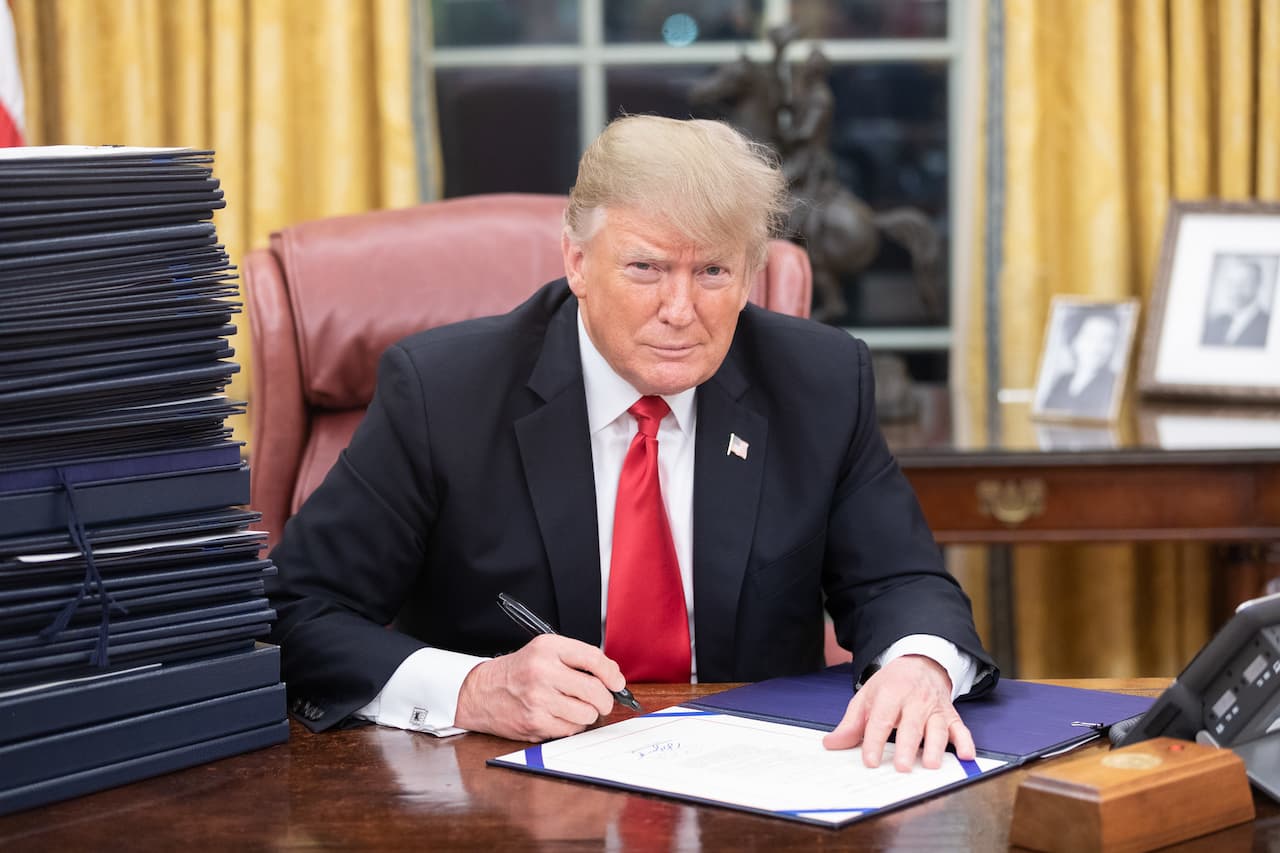 President Donald J. Trump is seen at his desk Friday evening, December 21, 2018, in the Oval Office with a stack of documents awaiting his signature. (Official White House Photo by Shealah Craighead)

One of the latest hysterical obsessions coming out of the “mainstream” media, most blatantly voiced by the web-magazine Axios, is the indication that President Donald Trump and his close advisors are planning to clean out much of the “deep-state” apparatus if Trump advances to a second Presidential term in January, 2025.

In late July, Axios ran a series of two articles, under the collective title of “A radical plan for Trump’s second term,” authored by Jonathan Swan.  Axios is one of the more recent flash-in-the-pan political websites, seemingly an “independent” voice, but led by a coterie of individuals who previously worked for such outfits as the Trump-hating Politico, the New York Times and The Hill.

What has these wonks all-aflutter are recent remarks from Trump’s friends concerning his intention to reimpose his 2020 Executive Order 13957, which created a “Schedule F” in regard to federal employees, empowering the President to fire a certain class of these employees if they are actively opposing the President’s policies, or otherwise acting in a way not in the national interest.  Schedule F was revoked by Joe Biden on his second day in office.  President Trump specified near the close of his July 26 remarks to the America First Policy Institute (AFPI), that a future Republican controlled Congress must legislate the policies he outlined in Schedule F. These policies are essential if the Presidency is to function. President Trump will use these presidential powers to root out the Deep State and other treasonous elements in the intelligence agencies who participated in the Mueller hoax, the impeachment travesties, and the 2020 vote fraud.  If Trump succeeds, this will go a long way toward “cleaning out the swamp” in Washington DC.  Thus, all of the whores employed by the uni-party establishment in Washington are staining their pants brown

From the adoption of the Constitution, up through the Presidency of Rutherford Hayes, Presidents usually filled vacancies in the Executive Branch with individuals of their own choosing, and replaced them when they were deemed unfit for the job.  Thus, the Executive Branch was under the direct authority of the President and functioned as one of the three Constitutional branches of our government.

Then, in 1883, President Chester Arthur signed into law the Pendleton Civil Service Reform Act.  This Act mandated that certain executive branch employees would be hired independently and could not be removed or demoted by the President.  In effect, it created an unelected bureaucracy in the nation’s capital, whose members were outside the control of the President, as well as the Congress and the Supreme Court.  Initially, only 10 percent of Executive employees were covered by the Pendleton Act, but this was expanded later by President Grover Cleveland to 40 percent, and today over 90 percent of Executive employees are untouchable.

Historians point to the alleged abuses of the “spoils system” as the motivation for the adoption of the Pendleton Act, but a little-mentioned secret, though it was publicly discussed at the time, is that the Pendleton Act was primarily intended to stop and reverse the appointment of freed slaves to positions in the Executive Branch.  Following the Civil War, and most emphatically under President Grant, many black Americans, particularly from the South, were given Presidential appointments.  This all stopped after 1883.

The sponsor of the Act was George H. Pendleton, an Ohio Democratic U.S. Senator who defended slavery in the 1850s, and then led the treasonous “Copperheads” in the U.S. Congress during the American Civil War.  Pendleton, who never renounced his pro-slavery views, was also George McClellan’s running mate against Abraham Lincoln in the 1864 Presidential election.

The process of “Civil Service Reform” was advanced under several subsequent Presidents:  Grover Cleveland and Woodrow Wilson solidified it, and then it was expanded further by Jimmy Carter.  The most egregious example of Wilson’s actions was the creation of the Federal Reserve, whose Board of Governors, as well as its Chairman, cannot be removed by the President of the United States no matter what they do.

Our modern day “civil service”—particularly the higher echelon of that civil service—is very much a component of what many historians and political analysts have called the “administrative state.”  Numerous books and even more essays have been written about the “administrative state,” but to simplify matters, the basic idea is that elected government, in the case of the United States both Congress and the President, will have limited power to enact law, but the actual day-to-day running of the government—including vital policy decisions—is handed over to an unelected bureaucracy, supposedly one that is independent and “non-political.”  Again, the Federal Reserve is a perfect example of such illusory non-partisan “independence.”

Many authors have explored this subject.  Some have rightfully pointed out the violence against the U.S. Constitution such a schema entails.  Very few, however, have looked at the long historical record that demonstrates the harmony of interest which exists between the “administrative state” and the modern form of financial empire.  The Parliaments of Europe or of the European Union demonstrate irrefutably the actual nature of limited, impotent “self-government” where elected members of the national Parliaments act out their bella figura, while the permanent bureaucrats impose the agenda of the central bankers and the oligarchy.  Empires, particularly the modern Anglo-Dutch financial empire, operate directly through the unelected “administrative state,” and actual elected government is an illusion.  This is how the British Empire works today.  It is also how our “intelligence” community works.  Obviously, for the United States, this is completely un-Constitutional.

Currently, there are about 2 ½ million employees in the Executive branch protected by federal Civil Service rules.  Donald Trump’s Schedule F would have no impact whatsoever on 99 percent of them.  Trump’s 2020 Executive Order, which created Schedule F, states that it will only apply to those who are involved in “positions of a confidential, policy-determining, policy-making, or policy-advocating character.”  This totals no more than 50,000 individuals—and probably fewer—but what it does encompass are those influentials in the FBI, CIA, NSA, Departments of Defense, Justice and State, the IRS—and other agencies—who are responsible for making or influencing policy, and who during Trump’s first term acted to sabotage many of his initiatives and conspired in his ouster from office.  Under Schedule F, Trump could—and he has made this clear as his intention for his second term—simply say to these people “You’re fired!”

Clearly, Trump issued Schedule F with his second term in mind.  As he emphasized in his July 26 speech to the AFPI , he is prepared to act on it as soon as he returns to the White House.  At that point, Trump could proceed to staff these agencies with leaders who are in line with his mission for America,—with what the American people actually voted for.  What is the point of voting, under our Constitution, if unelected members of the “deep state” can ignore the will of the electorate and impose the policy agenda of the oligarchy?  For example, when he was President, Trump was prohibited from firing Anthony Fauci.  Under Schedule F, the power to do so would return to the Oval Office.

Some commentators have reported that Trump and his inner circle are now actively recruiting thousands of individuals to staff a second Trump presidency.  This is very heartening, but at the same time, it must be emphasized that this process must be grounded in a mandatory requirement of personal loyalty to Trump, as well as to his agenda to re-industrialize America, put a final end to the endless wars of Bush, Obama and Biden, and restore economic sovereignty to the United States, as was accomplished by Abraham Lincoln.