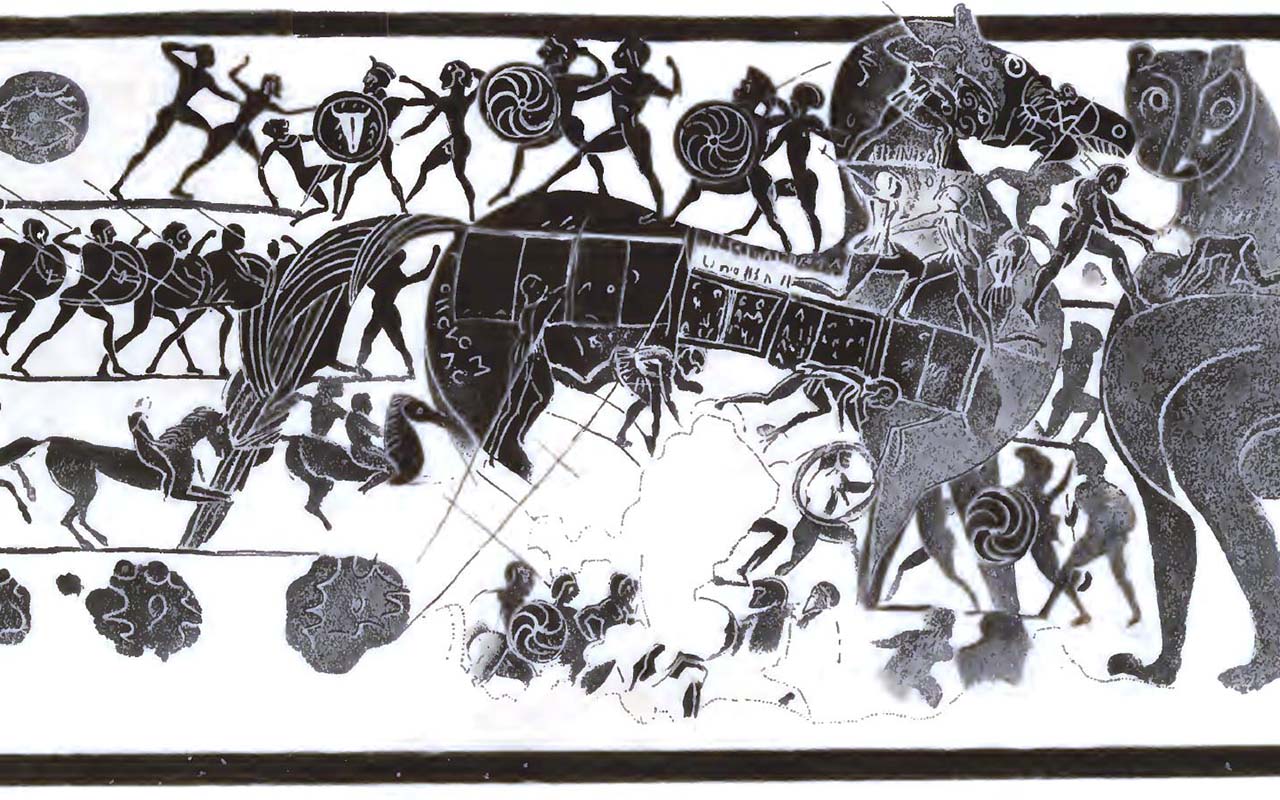 Depiction of the Trojan Horse on a Corinthian aryballos (ca. 560 BC) found in Cerveteri (Italy).

The Schumer-Manchin reconciliation bill now before the Congress is not a “tax and climate package,” or an “Inflation Reduction Act.” It is a Trojan Horse, concealing its poison under a word salad of Washington rhetoric. This down-sized version of the “Biden” “Build Back Better” bill, will destroy our economy and our nation.

To use a different tag, you might say that the Chuck Schumer–Joe Manchin Bill is the Charles Manson bill of the 117th session of the US Congress.

Either way, the insane murderous intent is to literally wipe out what is left of the US productive economy—with untold societal consequences.

Of course, Senator Manchin says he is convinced that he has a (so-far secret) agreement for passage of much-needed, new legislation for “streamlining permitting” for new oil and gas drilling, coal mining, and nuclear development, but the legislation, as written, only covers wind and solar swindles, “battery storage,” and “carbon capture.” What should be expected from someone giving away a Trojan Horse?

Adding huge new tax credits almost exclusively for wind, solar, storage battery, and carbon capture wingdings to the already ESG (Environmental, Social, and Governance) dominated British imperial central banking Federal Reserve system, ensures that US corporate and related investors will understand that there is only one place where the so-called “free market” will work its magic. Feudal energy sources will see guaranteed primacy; modern fossil fuel and nuclear sources will be starved to death.

Under the Schumer-Manchin bill, insane wind, solar, and battery “investments” will also get massive investment tax credits (ITC) and production tax credits, overlapping with other credits and tax swindles that exist now. There is a stand-alone investment tax credit (and homeowner credit) for “battery storage facilities.” Production tax credits (PDC) for solar projects are re-introduced, and PDCs are extended for on-shore and off-shore wind projects. The only new hurdle is that the megacorporations which will dominate this field must show Davis-Bacon wages being paid to their direct employees. Keep in mind that wind and solar power “farms” are being built by Berkshire Hathaway and Nextera Energy, not to mention foreign international combines out of the UK, Germany, and Spain,

To give a sense of how this is all being viewed by the Malthusians themselves, here is a bit of the reporting in Solar Power World:

“The Inflation Reduction Act includes a 10-year extension of the solar ITC at 30% and may include direct pay for nonprofit and governmental entities. According to ROTH Capital Partners, the ITC could reach 50% for larger projects depending on domestic product use and project location. The U.S. Energy Information Administration released a report today that found extending the ITC through 2050 would increase solar generation by 10%.

The reconciliation bill also introduces a 30% ITC for standalone storage, which the industry has been pushing for to reduce the cost of this crucial technology. Manufacturing credits for solar cells (4¢/W) and modules (7¢/W) made the cut too...

Overall, though, the solar industry reacted jubilantly to the news.”

Consider that, according to the U.S. Energy Information Administration’s latest projections, just the levelized cost of battery storage is $124.85-$128.55 per megawatt hour to the utility. This expensive “battery storage” electricity would be increasingly required if reliance on dark age, intermittent energy sources is to continue to grow—which it shouldn’t! A storage battery discharges in about 24 hours. After that, its gone...

And what about wind farms? These are not being built by newly-suited-up hippies, but by the financial oligarchy in its energy play.

With tax revenues stripped from struggling American manufacturing, money shaved off of medical prescriptions, and IRS shakedowns, this package, as now being sold to rubes, is projected by Senate Democrats to raise a total of $739 billion in new tax revenue; fund the above-noted array of mostly-insane, climate-change provisions ($439 billion worth); and purportedly pay down—over ten years—a mere $300 billion of the federal debt. That federal debt is now above $30 trillion dollars. Again, that is $300 billion—maybe—over ten years. McConnell, Schumer and Manchin will be long gone by that time.

In short, anyone who buys this is buying a Trojan Horse which will unleash the full-scale destruction of our remaining physical economy. The bill should be defeated now. If it is not, then any candidate running in the midterms must pledge to repeal it as a first order of business, along with abolishing the Federal Reserve, and establishing a Third National Bank of the United States to fund a crash expansion of fossil fuels and nuclear power. Launching the required industrial renaissance for working our way out of this crashing economy requires advanced nuclear power sources, with modern fossil fuel production as the bridge. Instead, Manchin and Schumer propose that you welcome the World Economic Forum’s Great Reset—a modern New Dark Age in which the very rich thrive and the rest of us are either culled, or enslaved.