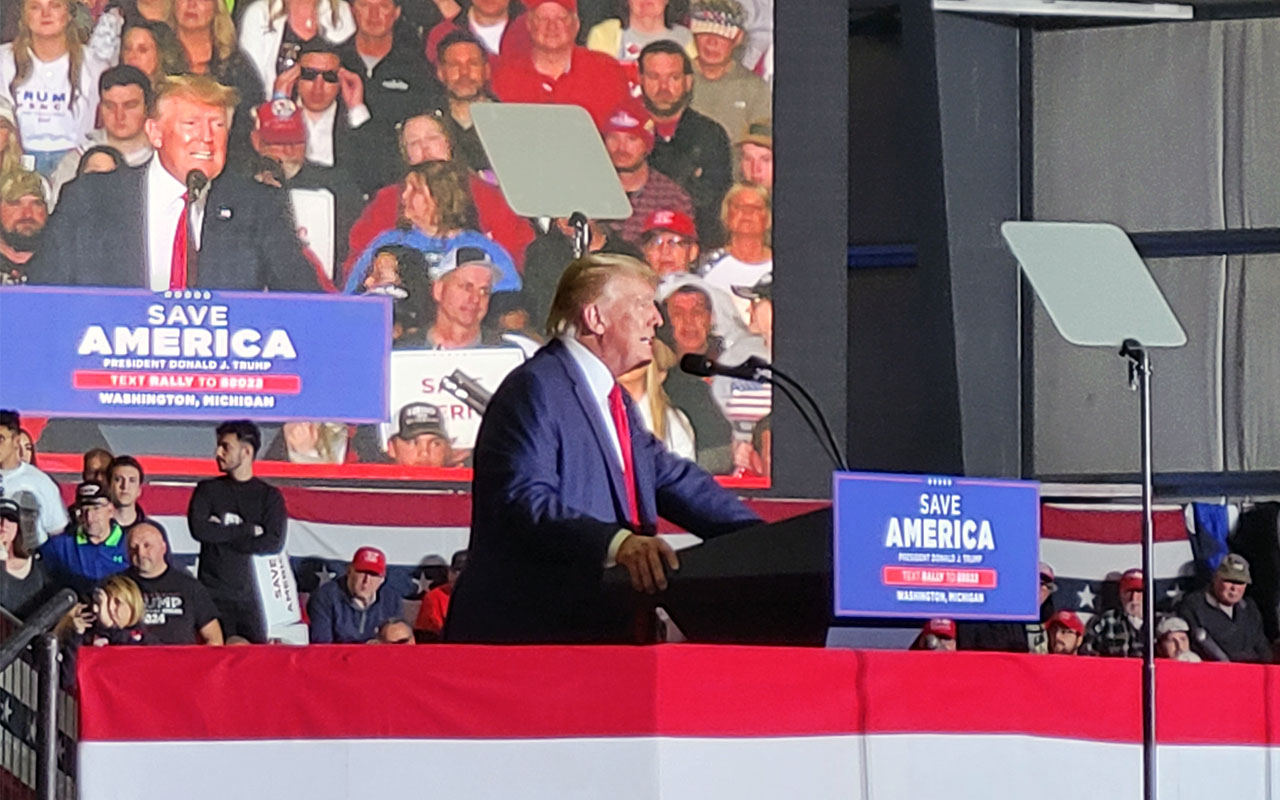 Trump at a recent campaign rally in Michigan. Photo: LaRouchePAC

How are the globalists, who are desperate to reelect Michigan Governor Gretchen Whitmer, attempting to stop the “red tidal wave” from sweeping over Michigan in November? They are deploying an array of dirty tricks to confuse and blunt the America First movement, using 1) the witches coven which occupies the state government, 2) RINOs in the State GOP, 3) the DeVos “never Trump” family (beyond RINOS), and 4) big money coming from the usual suspects, like Soros and Zuckerberg. As of mid-July, three weeks away from the August 2 Republican primary, 50 percent of Republicans are undecided in the governor’s race, thanks to a variety of chaos and psywar ops.

Here's what the America First movement must do:

And most importantly, outflank the bastards by transforming the Republican Party into the party of workers, producers, and patriots, as Donald Trump has pledged to do. LaRouchePAC’s new petition, “Hands Off Trump, Launch the Third America Revolution” is the clarion call for this fight.

Coming out of the August 2 primary, we must fully unify behind the GOP slate and ensure that we don’t let the globalist agenda lead to our self-defeat in November.

Gretchen Whitmer, her lesbian Attorney General, and her Soros-created Secretary of State will only be returned to office through the success of a many-front attack on the political process.  We, and like-minded patriots, intend to stymie that attack.

Obviously, this assault is not only going on in Michigan, and the enemy is so desperate it is exposing itself left and right (or left and left). Blatant actions by organizations connected to Mark Zuckerberg in Colorado and Democratic Party legal hitman Mark Elias in North Carolina show that the enemy knows what is at stake.

The solution: change the field of battle. While we must beat back these insane assaults, we must go on the offensive and shift the fighting to our terrain: namely the solution to the economic crisis. We must recruit broad forces to our economic agenda of abolishing the Federal Reserve and launching broad scale re-industrialization of our economy in manufacturing, energy, agriculture, transportation, and advanced technology. By unleashing the same spirit and productive forces that made Michigan the Arsenal of Democracy, we will bury the enemy’s radical cultural agenda with technological optimism. We will create a new Republican Party--a party of working people, other producers, and patriots--that will make Michigan great again and win statewide elections for years to come.