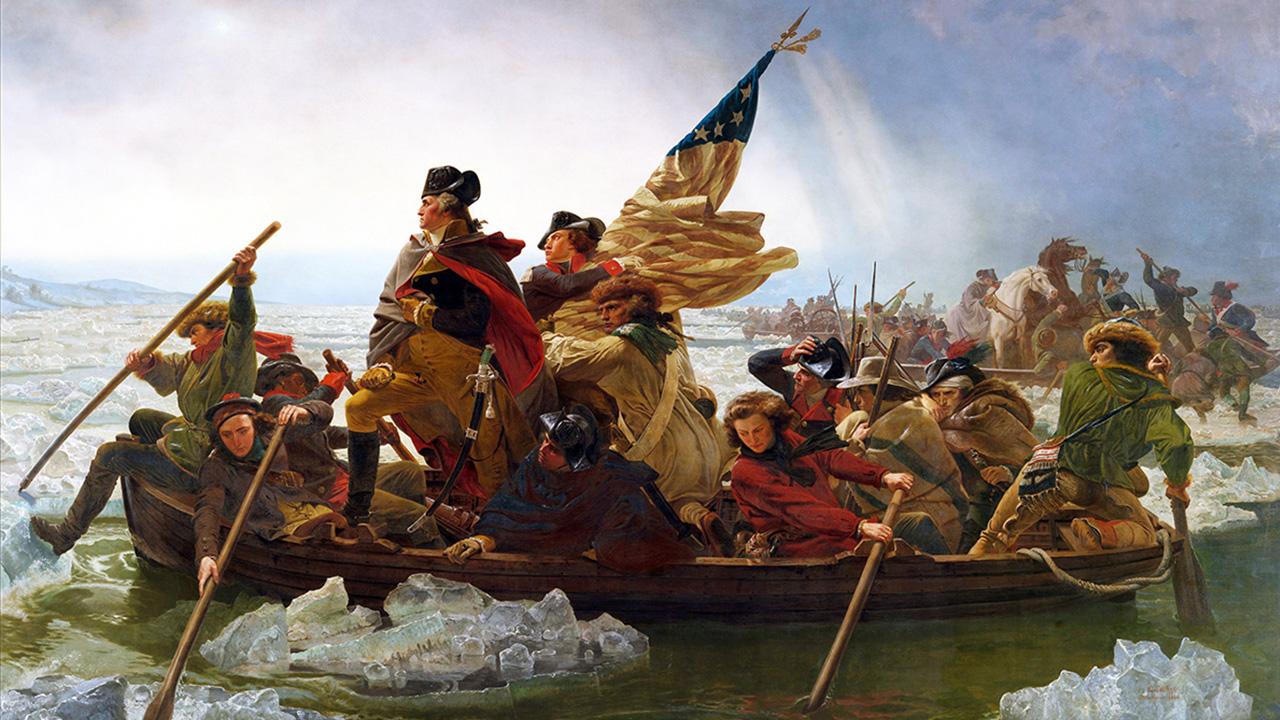 On Christmas Day, 1776, General Washington turned the tide of the American Revolution, having lost almost every battle up until he crossed the Delaware River, surprising and defeating the Hessians at Trenton and Princeton. His intervention was strategic, precise, and dealt a blow that both demoralized the enemy and rallied support in the population and Continental Congress.

Today, we are poised to accomplish a similar strike and defeat the Tories and mercenaries of today, in the revolution to secure President Trump’s electoral victory and overturn the immense vote fraud in the November 3, 2020 election. This battle, to date, has demonstrated both the corruption of our institutions and the intellectual bankruptcy and cowardice of our enemy. Faced with overwhelming evidence of outright fraud, the courts have simply refused to grant a hearing in which claims could be examined—blocking the hearing of evidence on procedural grounds. It is the legal equivalent of the media’s censorship. But, as Lyndon LaRouche and others have noted, the Courts under our system are not equipped to declare the winners of a presidential election. They should have heard the evidence, and as John Marshall said in Marbury v. Madison, should have said what the law is. But the ultimate decision rests with the people and their state representatives.

The state legislatures must renew their hearings on the vote fraud in the six battleground states: Arizona, Nevada, Pennsylvania, Michigan, Georgia, and Wisconsin. They should officially certify alternative electors to the Congress, pledged to Donald Trump. The Congress itself must, at the same time, be overwhelmed by the demands of the citizens to act in this unprecedented situation. A gross and foul attack has been made against the Republic. How this affair was conducted must be shown and proved to the entire citizenry of every political persuasion: unconstitutional use of the intelligence agencies for more than four years against the President, the use of the media and Silicon Valley to censor and sway the vote, and the calculated vote fraud itself.

Congress must hold urgent hearings airing and correcting all of this. For these wrongs, natural law and legal equity say there must be a remedy. That remedy is that upon consideration of the Congress, after such hearings, both in Congress and in the states, Donald Trump be declared President of the United States. Congress and the state legislatures remain our targets. Visit the website at the end of this leaflet for the phone numbers to call, and other things to do.

We are putting out an APB to all patriots to join us in targeting the legislators in the battleground states and their own Representatives and Senators in Congress, with the same determination General Washington and his troops demonstrated in crossing the Delaware on Christmas Eve.

What is at Stake if We Lose?

If the globalist, “deep state” forces, led by British financiers, are allowed to get away with usurping the vote, the resulting crisis will be global and generational, perhaps even existential. These puppet-masters running Biden and Harris would end the great experiment we began in 1776-81. They would forbid the USA (and thus the world) from new great achievements in space exploration, international diplomacy, resource development, and progress in mankind’s standard of living. Instead, they would enforce a victimized view of humanity that sees poverty alleviation as bad for the environment, while using identity politics to foment civil strife and fragment their opposition. They would point to convenient bogeymen—like Russia, China, climate change, racism, and terrorism—to try to make us accept a collapse in living standards. Biden’s choice of nominees makes clear he would install everyone from the worst of the social justice warriors and their “1619 Project,” to the worst of the beltway think-tanks with their endless wars and their global bailout of a rigged financial system. If the forces running the Biden-Harris charade are allowed to return to power now, it is only a matter of time before a global emergency (real or staged) worse than COVID-19 or 9/11 strikes. It will be used to attempt to create an outright globalist bankers’ dictatorship in the name of crisis management.

What is at Stake if We Win?

The British Integrity Initiative has pointed out that Trump’s re-election signifies the end of their paradigm, described in summary above. Their exposure in the perpetration of frauds like the Russiagate hoax, the bogus impeachment, the election heist, media fraud and censorship, illegal wars and other major crimes, will cause a popular demand for justice that will reach back through several previous administrations. In such a drive for righting wrongs, we can expect the exoneration of important leaders and whistleblowers who have been wrongly persecuted by this empire for seeking to expose and supersede it with our Constitutional republican American System. Most notably, these include Lyndon LaRouche, Edward Snowden, Julian Assange, Chelsea Manning, and Bill Binney.

The American System, established by Alexander Hamilton and revived in the 20th century by Lyndon LaRouche during his presidential campaigns, was designed to eliminate empire by establishing a world of sovereign nation-states acting freely in the best interests of each other, to pursue the common aims of mankind. Key among these aims are peace, the elimination of poverty and famine, economic prosperity, improved literacy, eradication of disease, and the exploration and domestication of the universe we inhabit through a robust human space program–along with other major jobs projects. The LaRouche PAC website hosts an extensive archive of these projects, such as returning to the Moon as the gateway to Mars, the North American Water and Power Alliance, the World Landbridge, and the development of widespread nuclear fusion power, as well as the economic reforms needed to finance such jobs programs without giving veto-power to Wall Street derivatives bubbles or radical Malthusian environmentalism.

The United States of America has been and will continue to be a leader in the world by the way we drive forward on such great new initiatives. Key among the principles of our exceptionalism is our openness to work with other great nations and develop trade deals that link us together and help us overcome our differences, while also making great strides towards the common aims listed above. Even those whom many today view as enemies, like Russia and China, have a long history of collaboration with the USA in the common fight against the globalist geopolitics of British imperial meddling in our internal affairs.

This is the new renaissance we hope to achieve, but it requires an energized and active population to demand the better world we were born to create. As grand and inspiring as all these great projects are, still, from today through January 6, 2021, we must maintain a laser focus on demanding the Congress and states intervene in this electoral coup d’etat being run on behalf of the Biden-Harris ticket. The world will no sooner forget our actions today, or our failure to act in these waning days of 2020, than it will forget Washington’s crossing of the Delaware on that Christmas Eve long ago.

Here's What We Must Do

FIRST—Contact the two leading Republicans in each the five swing state legislatures, tell them to continue their investigations of vote fraud, and to move forward with certifying an electoral slate which represents the actual vote of the American people, not the fictional numbers of fraudulent votes.

SECOND—Contact your U.S. Representative and Senators. They will be meeting January 6, 2021 to certify the election. Our members of Congress do have the Constitutional authority to stop the brazen attempt to steal the U.S. election. If this vote fraud goes unpunished, we risk losing our republic. They must know, from you, that the time to act is now.

THIRD—The President is asking for a massive turnout to the U.S. Capitol January 6, 2021 when the Congress will be voting to certify the election. Can you make it? LaRouchePAC will be there in force, follow our Marching Orders page for updates and how to coordinate our presence at the rally.