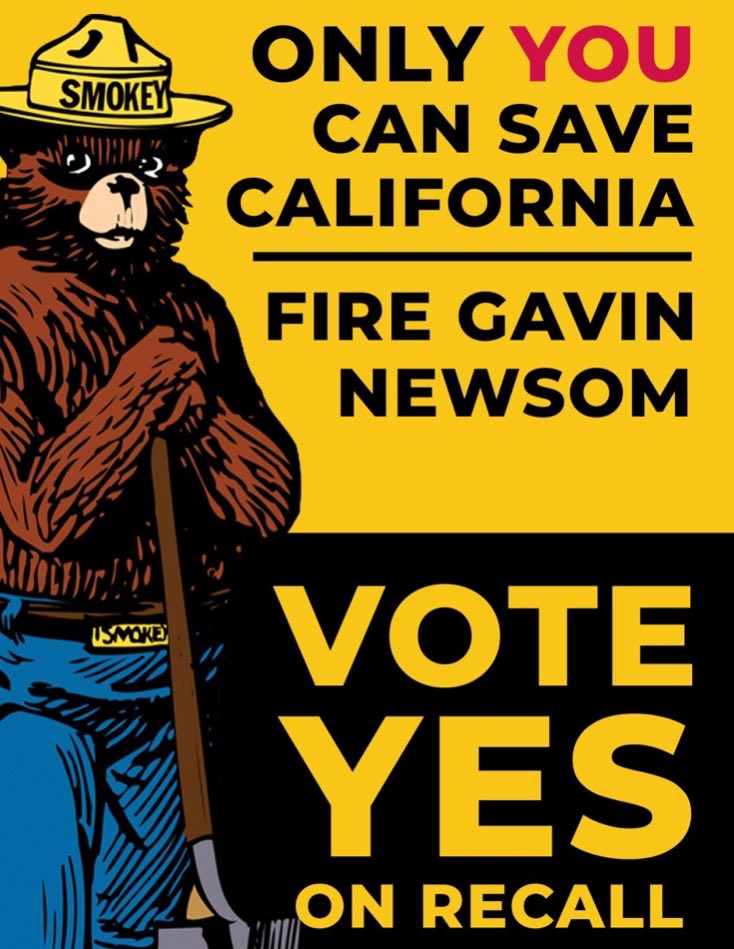 The Los Angeles Times, the lead propagandist for saving Gov. Gavin Newsom, let the cat out of the bag two times last week.  While promoting one of their fake polls showing Newsom saving his seat, they admit that when the population was focused on who Gavin Newsom is and the harm he has inflicted, Newsom was losing the recall.

They also demonstrated that their fake polls are truly fake.  As of September 8th, they note, 70% of the mail in ballots were still outstanding.  The recall, in other words, is still up for grabs.

According to the Times, when Newsom’s billionaire buddies found out how much most people despise the clown governor, they spent millions deluging Californians with ads based on a “new narrative,” one that has nothing to do with who Gavin Newsom is and the harm he and his Silicon Valley and Hollywood buddies have inflicted on California.

Don’t focus on reality, voters are being told.  Focus instead on hatred of Donald Trump, despite the fact Donald Trump is nowhere to be found on this ballot. Fear the black man, Larry Elder, who they say, is a transmogrified white supremacist.  Endangered by the recall, they yell, is the “right” to have an abortion, because of a law passed in Texas.  Wherever you stand on abortion, it’s not an issue in California or in the recall election.  Just do anything but focus on the destruction Gavin Newsom and his friends have brought to this once great state.

Think about that.  They truly believe that you are stupid, and that fear and hatred drive you rather than any well-founded hope for a better future which they have no idea how to provide.  The fact that they think of you this way more than demonstrates that they could give a tinker’s damn about you or anyone else outside their fenced in estates and enclaves.

Reality, of course, is very different than this fake devil’s brew concocted by those who claim to be magicians in Washington, D.C.

Reality speaks in the form of the continuing surge in homelessness in California, the lack of any education of our children, the incompetence of the state’s handling of COVID, in which many lost their lives and fortunes while Newsom, drunk on his emergency powers, issued endless shutdown diktats.  “Let them eat cake,” is the attitude he so eloquently expressed in his soiree at the French Laundry.

Reality speaks in the form of the crime and addiction rampant in once proud and beautiful cities, the power grid which does not work, the fires which burn relentlessly because of human incompetence, and in the fact that water, the elixir of life, is now denied to farmers will soon be rationed to everyone.

Reality speaks in the form of the inflation now running rampant, making it difficult to buy food, housing, or transportation, even with a high minimum wage.

Reality summons us to solve these problems, like Americans and like our forefathers in this state once did readily.

As the recall heads into its final days, Newsom himself has run around like a re-incarnation of Louis XV.  You can almost imagine him in a wig as he proclaims, “After me, the deluge,” endlessly.  His flatulent rhetoric boiled down to its essence is the wild claim that if he is not re-elected you are going to die.  Does this strike you as the calm confidence of someone who is winning?  Why has the entire national Democratic Party, including the current occupant of the White House, Joe Biden, mobilized to save this hapless clown?  Do they see the same thing we do—the defections of California Democrats and independents?

Across the land, people are waking up to the fact that this is a potential political earthquake.  It is not just a California matter.  Defeating Newsom can and will fatally disrupt Washington’s agenda to destroy the rest of the country just like Newsom and his friends have destroyed California.  Recalling Newsom will provide a shock of hope and optimism to an entire country, now fighting for the future of the United States.

Vote “Yes” on the recall, in person, on September 14th.  Organize everyone you know to show up and do the same.  Make yourself, your friends, and your family part of the historic shot heard round the world!