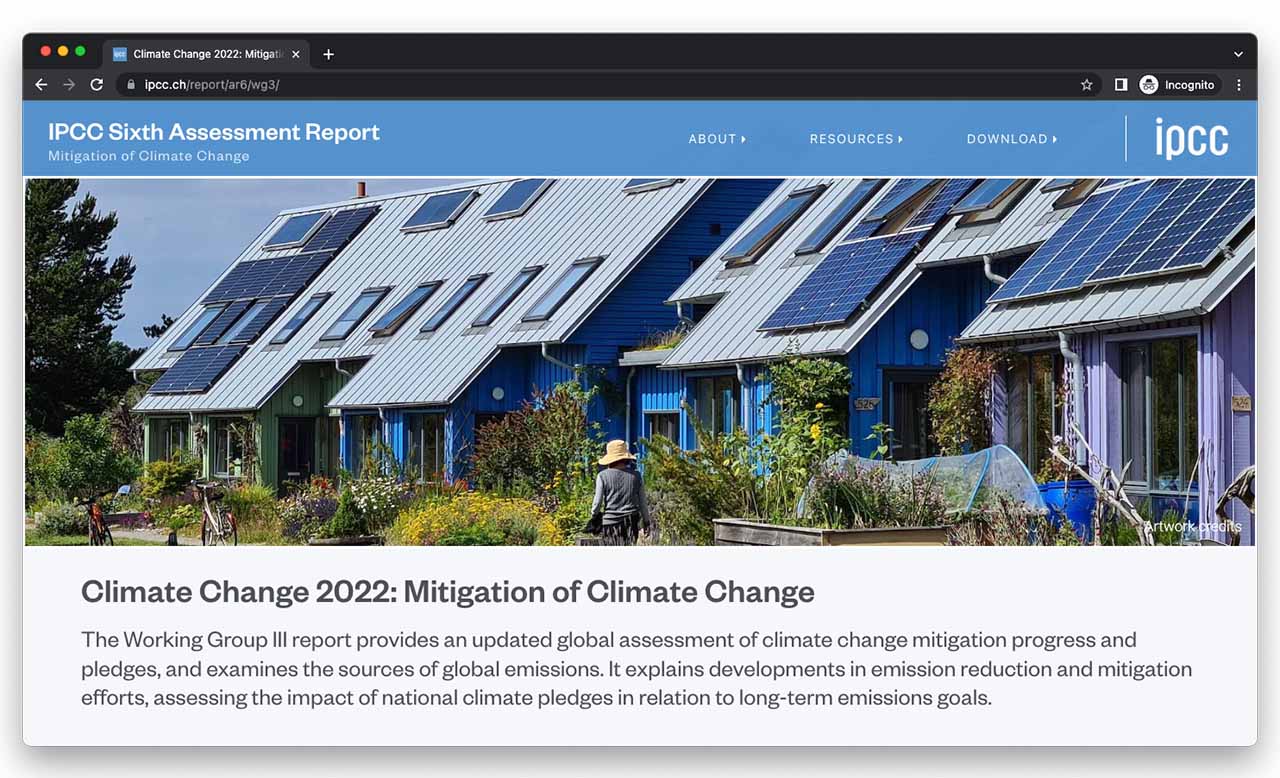 On April 4, 2022, the United Nations Intergovernmental Panel on Climate Change (IPCC), with as much fanfare as they could muster, issued a new report—their third report this year—announcing, yet again, the threat of “Imminent Climate Catastrophe.”  In a statement accompanying the report, the IPCC demanded that, “It’s now or never,” for mandatory drastic reductions in carbon dioxide and methane gas emissions.  Mentally challenged John Kerry, the U.S. Special Presidential Envoy for Climate, responded by declaring that the Report, “represents a defining moment for our planet.”

This latest IPCC Report would not be particularly noteworthy but for the fact that it is part of what is now very clearly an escalation by the financial oligarchy to impose the full brutal agenda defined by the World Economic Forum and the UN Climate Change Conferences for depopulation, deindustrialization, and elimination of national sovereignty.  Many national governments, including the craven Biden administration, as well as the Silicon Valley tech monopolies and most of the imperial Central Banking System, have all reached agreement to ratchet up the drive to completely destroy what is left of the productive economy of the United States and other nations.  As they, themselves, state, “Its Now or Never.”

It is within the larger context of this genocidal intention that the observer must view the initiative, announced on August 19, 2021 by Klaus Schwab’s World Economic Forum, to establish a new global Centre for Urban Transformation in the city of Detroit.  What is now planned is to use the city of Detroit as the model for the complete destruction of America’s already devastated cities.  The anti-human ghouls behind this project are so arrogant and so dismissive of sovereign government that they didn’t even bother to use correct American spelling in naming their new spawn.

In proclaiming the new Centre for Urban Transformation, Jeff Merritt, Head of Urban Transformation for the World Economic Forum, blathered, “Around the globe, cities are facing unprecedented challenges from COVID-19 to climate change, exposing deep systemic inequities.  As we chart a course towards a more sustainable and equitable future, government cannot carry this burden alone; increased public-private cooperation is essential.  Detroit is uniquely positioned to serve as the epicenter for this work.”   Maimunah Mohd Sharif, Executive Director of UN-Habitat, added, “By 2030, six out of every ten people in the world are expected to reside in cities.  We need an urgent change in mindsets, policies, and approaches towards urbanization. . . .  We look forward to working with the World Economic Forum to advance the New Urban Agenda and Sustainable Development Goal.”

The Detroit center will be supported by a global network of individuals, mostly based in the World Economic Forum’s offices in Beijing, Geneva, Mumbai, New York, San Francisco, and Tokyo.  The City of Detroit will serve as a test case for the Centre’s projected “transformation,” but the Centre will also serve as the WEF/UN base for establishing similar projects in many other cities as soon as possible.

The Nature of the “Urban Transformation”

Four months ago, from December 6th through 8th, the WEF’s Detroit Centre for Urban Transformation held its Inaugural Urban Transformation Summit.  This three-day event included numerous Zoom-based presentations, interviews, and panel discussions, all of which are available for viewing on the Centre’s website.

After viewing the bulk of what was said and discussed, I can state, with authority, that what is being proposed for Detroit and other cities is literally Satanic in both its conception and intention.

If one examines not simply Detroit, but the horror of hundreds of cities in the once-industrial Great Lakes region of America, the devastation inflicted by the financial/economic policies of the last 30 years is palpable.  Millions of union-wage and other decent paying jobs in manufacturing and agriculture have simply vanished.  Millions of American citizens have been driven into low-wage jobs or onto the dependency of government assistance.  Poverty has become permanent, and with it the despair that has led to an explosion in drug usage and addiction—leading to the explosion in urban crime.  Additionally, urban infrastructure has decayed and collapsed.

That is the reality of Detroit and hundreds, if not thousands, of other American cities.  Yet the December, 2021 Urban Transformation Summit did not address, or propose solutions to, a single one of these critical tragedies.

Instead, the single-minded focus, the near-fanatical drumbeat uttered at the conference, was that cities must be “re-imagined,” and that all urban policy—ALL urban policy—must be driven by the irrevocable straight-jacket of fighting “climate change.”  Nothing, absolutely nothing, can be allowed to violate the green agenda.

Thus, talk of bringing back manufacturing is verboten.  Building large scale nuclear or other energy facilities is never mentioned.  Large-scale water projects are similarly ignored.  And, in watching the December presentations, one finds that the chaos, destruction, and the toll in human lives of the narcotics epidemic never even comes up for discussion.

Instead, the only item on the agenda is “to make Detroit ‘green’.”  For example, in the panel discussion on Urban Transportation, the participants were literally rapturous in describing, bicycle lanes, “safe” pedestrian walkways, and “smart” cars.  Similarly, in a discussion on housing, no one addressed the wretched conditions that people must endure in ghetto housing, or how we must develop a productive economy such that families can afford decent shelter.  No, instead the Summit devoted an entire panel discussion to “Green Buildings” and how we must build housing that emits less CO2 and Methane in both construction and occupancy.  They bluntly state that all new buildings must follow COP-26 guidelines. There was another panel discussion on “Healthy People” which did not mention expanding hospital facilities or improving the doctor/patient ratios, but rather focused on “urban gardening,” including teaching apartment dwellers how to create “vertical gardens.”  They also demand that “new patterns of consumption” must be enforced.

One demand of the participants is that 30 to 35 percent of all land usage be set aside for parks and “greenways,” because, as they state, “cities must first and foremost serve nature.”

The Financiers Get Their Pound of Flesh

One of the Panels at the December Summit was “Rethinking Public-Private Cooperation,” and in that discussion, as well as in other interviews and presentations, the actual parasitical nature of the Centre for Urban Transformation comes into full focus.  All of the projects being proposed by the Centre are designed to be in the form “public-private partnerships,” with the overwhelming bulk of the financing to come from the private sector.  Some (hopefully very few) libertarian fanatics might applaud this “private initiative,” but please don’t be fooled.  First, consider the WEF’s evil intentions which govern the entire project.  Second, consider that the intent is not to build anything useful, but rather to create new “assets” which then can be monetized and become the basis for financial speculation.

Much of this approach derives from the WEF’s demented concept of a non-existent “Fourth Industrial Revolution,” in which Artificial Intelligence (AI), 5g technology, and related innovations become the basis for all (or most) newly created “wealth.”  For example, one of the panelists stated that we must “get away from legacy ideas of manufacturing, engineering and infrastructure,” i.e., factories, dams, water projects, roads, etc.  Instead, the future will involve the “Digitalization of Infrastructure, “Smart City Infrastructure,” “AI-directed crosswalks,” etc.  He even provides an example of “self-parking” cars, utilizing 5g technology, as an example of the “new infrastructure.”

All of this would be laughable, but consider that one of the topics discussed in the panel was “Maximizing Value in Infrastructure Investments.”  The plan is to spin-off or create numerous projects which will then become salable financial assets.  We have already seen many examples of this.  Think back to the “cap-and-trade” legislation which was first introduced in the United States in the 1990s, where “carbon emission trading” became the basis for massive financial speculation and profit—that is, by reducing carbon emissions and destroying the economy, speculators raked in millions of dollars.

What is proposed is not simply the old evil of “privatization” where a private company, for example, takes over energy or water delivery systems and then gouges the public with price hikes and service cutbacks.  This is a financial scheme whereby the lives and well-being of American citizens are ground down as new financial instruments are created for the benefit of the financial oligarchy.  This is also coherent with the efforts by Black Rock’s Larry Fink and the Bank of England’s Mark Carney to corral the banking community into financing only “green investment.”

This is the plan for Detroit and for all of the targeted cities of the WEF.  Nothing useful will be built, but dozens of public-private partnerships will be created for green projects, for the creation of new “financial assets,” which will then become the basis for windfall speculative profits.  Already, a number of major financial players, such as the Swiss Reinsurance Company Ltd. (Swiss Re), have jumped onboard the Centre for Urban Transformation project.

“Inclusiveness” is a buzzword for Klaus Schwab’s Davos crowd.  For the extremely gullible, it sounds good, much like another WEF slogan, “Stakeholder Values.”  But these are merely examples of  Orwellian Newspeak, wherein the most evil of intentions hides behind the most innocuous phrases.  Take, for example, one of the proposed “inclusive” activities.

Participants at the Summit were almost feverish in their plea that we humans must “End the War Against Nature” and that this must begin in the cities.  To that end they propose the mass indoctrination of young children, utilizing the mantra of “Reduce-Reuse-Recycle.”  They prescribe that every child in Detroit will plant a tree, with organized brigades of youth deployed in such activity.  Such projects will be “all-inclusive,” as will access to community vegetable patches, food give-away programs, and the use of bicycle lanes.

Racial discrimination will vanish in these nature-friendly pursuits.  We will all learn to be happy in serving a greater cause, basking in the glow of saving the planet.  Of course, we will also learn that sharing the poverty will become universal, regardless of skin color or sexual orientation.  The lack of decent jobs, the shortage of health care, miserable public education, and the drug epidemic will also be “all-inclusive”

This is both a murderous green agenda, as well as predatory oligarchical finance.  For the sake of the people of Detroit, this should all be rejected.  The voters of Detroit should take any local politicians who support WEF’s Urban Transformation Project and drive them out of office.

Lyndon LaRouche and LaRouche PAC have fought strenuously for returning our Republic to the American System of Alexander Hamilton and Abraham Lincoln.  We, as a people, must utilize the power of sovereign National Banking to rebuild the productive power of our entire nation.  This will involve the rebuilding of Detroit and our other cities as centers of manufacturing, commerce, and transportation.  The prosperity and promise of 1961 must become the economic baseline, the minimum to which we return and then supersede.  This can all be done by abolishing the Federal Reserve and initiating the greatest expansion of our productive economy in history.  If we do this, Detroit will have a future.  We will all have a future.