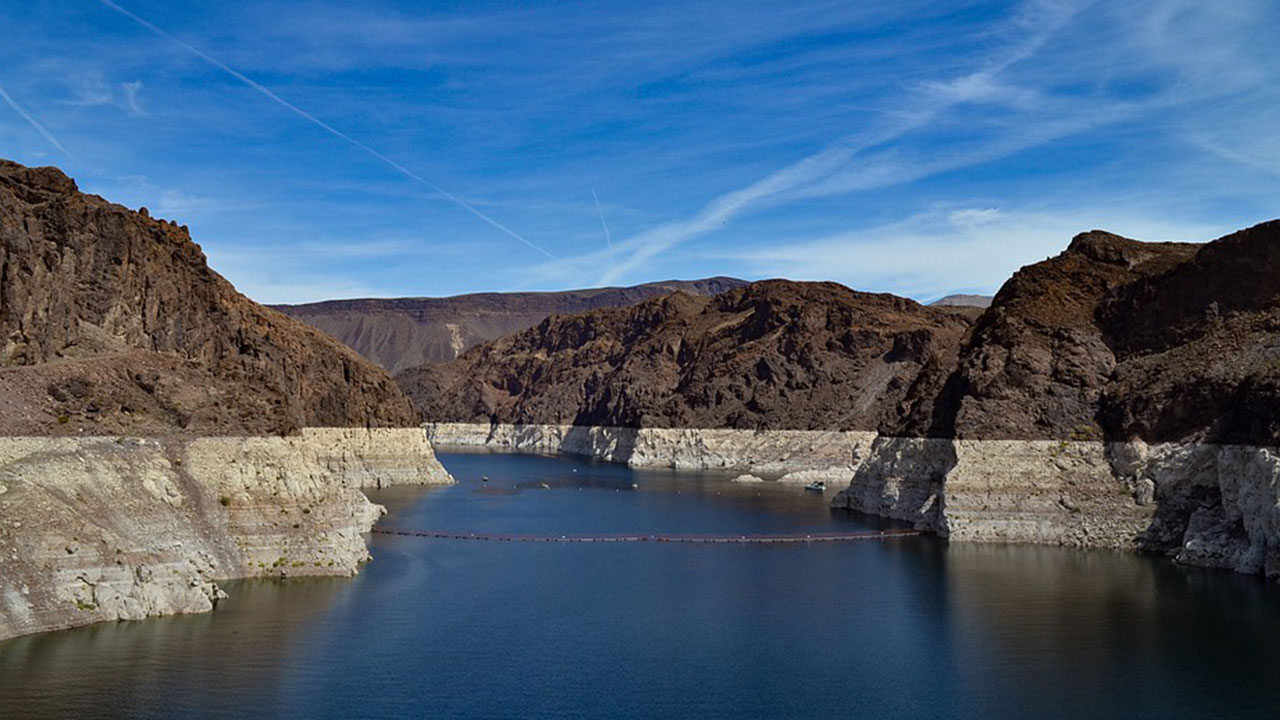 by Michael Carr & Brian Lantz Does your neighbor know? Our Western United States is being hit by the most severe drought in over 1200 years, according to climatologists, far surpassing the extreme drought of 2015. Seven states in the West are entirely in drought this week after the US Drought Monitor announced a deterioration of conditions in Montana, which joins California, Nevada, Oregon, Idaho, Utah, and North Dakota on the list. That is not to mention whole sections of other western states where extreme drought conditions prevail. Wells are running dry. California and Oregon are suffering from drought fed fires. Electricity is at risk as the hydroelectric dams which produce it are running on empty, particularly in the Colorado River Basin and in California.

More than 95 percent of the West is in some level of drought, with nearly two-thirds in extreme or exceptional drought—the two worst categories.

If you neighbor is not fully informed, including about the real solutions, it is partly because the Mass Media is hard at work. These conditions are something we can change. They are the result of almost 40 years of human neglect and related governmental criminal negligence and incompetence. They are not the result of irreversible climate change as our Democrats and similar irrational pessimists and ideologues argue, covering for their studied incompetence.

For the U.S. economy, the vortex of the drought impact to date is California, with its major role in the U.S. economy. With a population of more than 39 million people, the 'Golden State' has more of our citizens than any other U.S. state. And they can and must be playing their role, as a science and technology driver for America's future.

The water crisis's greatest impact to date is to California agriculture, vital to the entire nation. Further, the drought is directly threatening the urban areas in the northern half of that state. This is important to understand, in terms of the ability to concentrate and prioritize federal and state resources, including offshore desalination capabilities and other sources of potable water.

In our U.S., California is the largest producer of food despite having less than 4% of the farms in the country. California alone is the world’s fifth largest supplier of food, cotton fiber, and other agricultural commodities, including dairy products. This is thanks to our technologically proud farmers and a legacy of water works, including major capabilities for irrigation use.
But on August 3rd, California regulators cut off thousands of farmers from their main irrigation source, voting to ban them from pulling water from the state’s main rivers and streams as the drought worsens. The emergency curtailment order essentially covers the entire Central Valley, the epicenter of California agriculture.

In addition to agriculture, the drought is severely threatening cities in the Northern half of the state. The City of Oakland and surrounding communities get their water from the Mokelumne River Watershed, which is at the foothills of the Sierra Nevada Mountain range. On average, the watershed gets 46 inches of rain. This year, 24 inches have flowed into Pardee Reservoir, where 90 percent of Oakland's water supply is collected. With news that the reservoirs wouldn’t refill, the East Bay Municipal Utility District's Board of Directors declared a drought. The San Jose Municipal Water District's water is mainly imported from three sources which all draw water directly from the Sacramento-San Joaquin Delta watershed, which is going dry. There is the city of Sacramento itself, the state capital. Eighty-five percent (85%) of Sacramento's drinking water comes from neighboring rivers, now shrinking fast.

Our Nation can marshal its emergency resources for deployment in the urban parts of northern California. As drought conditions appear to be getting more severe, it is important to consider the freshwater option available from the U.S. Navy. The American taxpayer is already paying for this desalinization capability, so using Navy ships as a water source is a solution waiting to be exploited to solve a potential problem. San Diego has over 50 Navy ships and submarines in port. Each one of these vessels has Reverse Osmosis desalinization capability. Each aircraft carrier produces up to 200,000 gallons of drinkable water daily, and so-on. Government agencies are reportedly preparing contingency plans to supply the region with Navy-produced water. These resources can provide a few million gallons of precious water a day. Private companies also have a very limited capacity. Such capabilities represent a short-term emergency capability to stanch a severe open wound.

The first step in solving this crisis, however, involves overthrowing the entire green/brown dictatorship over ideas and actions which has prevailed in recent decades. California, like the rest of our nation, could be far more productive and resilient than it is today once the “limits to growth” and related stultifying ideologies are tossed aside. We need to think “big” again. That is the American way. And we must start doing so now if we are going to produce even medium-term solutions to this emergency.

Over the past 20 years, as the cost (as measured in both money and effort) of filtration-based water desalination has come down, construction of desalination systems has boomed around the world. Even once parched, and energy-poor Israel has been able to use the technology to become an agricultural powerhouse and a water surplus nation. This technology is enabling Israel to share its new abundance with Jordan in a major step towards developing neighborly relations—a pale but nonetheless real reflection of Lyndon LaRouche’s famous Oasis Plan for Middle East Peace.

Even some Californians succeeded in beating back the genocide lobby to the extent of recently building the biggest North American desalination plant (50 million gallons of fresh water a day or 7 to 10 percent of the San Diego area consumption) in Carlsbad, CA.

The Carlsbad plant is producing fresh water at $0.005 per gallon. The main cost of this process is the electrical power used to force the seawater through the filtration system. Recent tests of Graphene Oxide laminated filters show promise of drastic reductions in electricity requirements for desalination since water’s capillary properties along with Graphene’s hydrophilic properties cause water to naturally tend to flow through such filters without application of force. So, prospects exist to radically lower even further the costs and power requirements of desalination.

Current discussions in Washington on the subject of “infrastructure” are not only inadequate but incompetent in the face of this crisis. Historical American use of the term “infrastructure” always involved the lifting of society to what Lyndon LaRouche called new platforms of development.

A developing water emergency exists throughout the Western United States, endangering industry, agriculture, and people individually. Governments—Federal, state, and local—have been taking measures to respond to the crisis with short term rationing approaches. While some of this is now unavoidable due to the decades long British Imperial efforts at shutting down the North American productive system, it is an approach which leads to death and poverty—if allowed to remain our sole response.

Therefore, we present a real infrastructure plan to solve the crisis while simultaneously tossing out the murderous anti-human axioms of “Limits to Growth,” “carrying capacity,”” the Green New Deal,” “Zero or Negative Growth,” etc. We list below the required measures ordered by time.

1. Task the Army Corps of Engineers, the Navy, and the Department of Commerce to bring to bear the portable desalination and power capabilities of the military and private firms to ameliorate water shortages in the West on an emergency basis.

3. Task the Department of Energy (dragging the bureaucracy of the Nuclear Regulatory Commission along) with turning the nascent Small Modular Reactor (SMR) industry into a powerhouse able to produce and install at least 1 SMR a month by late 2022.

4. Task the existing manufacturers of desalination plants with a rapid production gear-up which must be tied to a guaranteed market for their output. This will be modelled upon the Operation Warp Speed project set up by President Trump for guaranteed purchase of Covid-19 vaccines even before their regulatory approval.

5. Task the Department of Energy, the national laboratories, and the Chemistry and Engineering departments of our universities, with developing a crash program for developing modular, low energy desalination plant designs for mass deployments.

6. Begin the process of building the continental water and power distribution system known as the North American Water and Power Alliance (NAWAPA). This program, long promoted by such Americans as President Kennedy, Bobby Kennedy, and Lyndon LaRouche, holds a key to the ability to keep water and power abundantly available for all uses in Western and Central North America—from Canada to Mexico.

Quickly reviewing the California drought again, one aspect especially stands out: the agricultural disaster, with the effect on the food supply of our nation. Stretching from the rice growing area between Chico and Sacramento, but then extending south through the Central Valley to Fresno and Bakersfield.

The Imperial Valley's water sources are not yet as seriously affected as that of Central Valley, but that could happen very soon. The Imperial Valley receives its water supply from the Colorado River, not from the snowpack off the Sierra Nevada Mountain range or rainfall. However, the flow of the Colorado River is falling rapidly. Lake Mead—the reservoir that holds much of the southwestern states’ water, including the Imperial Valley’s—has dropped to levels not seen in its history, less than half of its former capacity. The same is true of Lake Powell further upriver in Arizona. Hoover Dam, the hydroelectric power source feeding Southern Nevada and Southern California is already operating at 25% less capacity because of the drought.

This is not "global warming." Considering longer cycles, as LaRouche PAC's Pat Ruckert has detailed, the Southwest region has been subject to sustained periods of both drought and then flooding, over more than a thousand years, before man ever arrived. We must more permanently transform the conditions for humankind!

We must act immediately now to secure the future of the western half of our country. That ensures that in the medium term the solutions to this problem will be underway while we mitigate the disaster now upon us in the best human way possible.