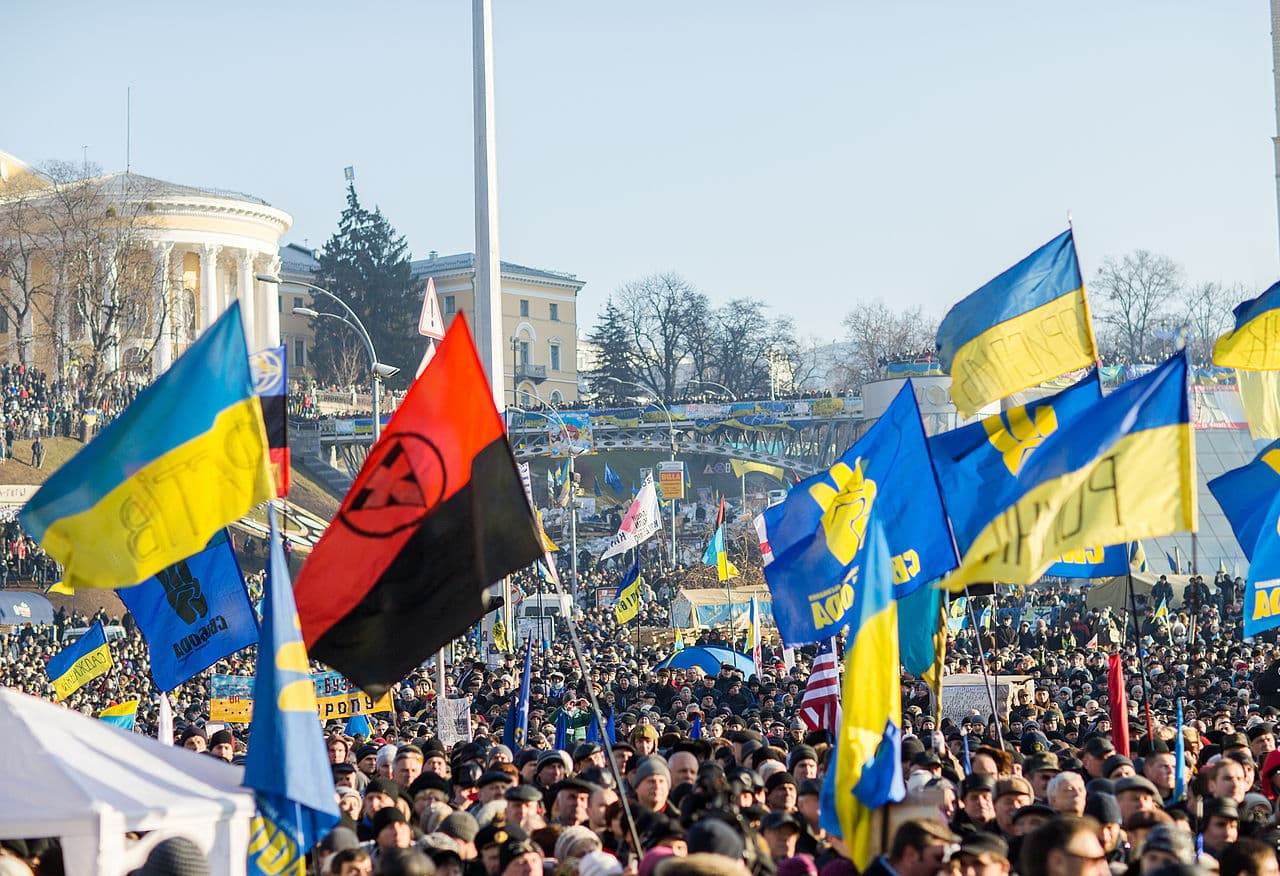 Protests in Kiev at Euromaidan, December 29, 2013. In the foreground, a red-and-black flag of the Stepan Bandera All-Ukrainian Organization ″Tryzub″ can be seen. Photo: Sasha Maksymenko / CC BY 2.0

As of Wednesday, January 26th, there is a growing revolt in the United States about the drive to world war over Ukraine and NATO expansion in Europe. We wrote about the essentials here on Monday and have otherwise covered the U.S./British occupation of Ukraine since the coup the U.S. and the British staged in that country in 2014.

The revolt is centered in the Trump movement with additional support from sane Democrats and independents such as former Congresswoman Tulsi Gabbard. In his recent interview with Lou Dobbs, President Trump responded to Biden’s consideration of sending large numbers of troops into Eastern Europe as a trigger which would “start World War III.”

Now, Glenn Greenwald reports in an otherwise exemplary post, detailing the present Democratic Party home of Washington’s insane neo-Cons, that Congress’ phones are, indeed, ringing off the hook in opposition to this madness. This needs to become a tidal wave. The number is 202-224-3121, then ask for your Representative or Senator.

Tucker Carlson has led the charge here, featuring the insanity permeating Washington nightly over the past two weeks while his network, Fox, has otherwise served as a bellicose war monger. Washington now says Tucker must be in Putin’s pocket, just like Trump.

We provide here some other exemplary voices in opposition to the insanity for your background reading. It’s conceptual ammunition for stopping a potential disaster for the human race.

Moon of Alabama. He provides a roundup of evidence which others have pointed to. The big lie here is that there are over 100,000 Russian troops massed on Ukraine’s border ready to attack. That is a complete and provable fabrication.

Aaron Mate. Mate has followed the Ukraine saga with intensity since the 2014, UK/US Ukraine coup including covering the neo-Nazis we are arming with advanced weapons who lead whole chunks of the Ukraine defense forces. His analysis published January 26th, details the war profiteers in Washington who are pushing this completely unnecessary conflict.

Patrick Lawrence. Lawrence provides another roundup of the present status of things, recommended for its background and simple sanity.

Matt Taibbi. Although I don’t agree completely with an aspect of Taibbi’s analysis, he always manages to graphically capture the insanity of our elites, particularly those at the switch now, in a manner designed to put you into action. That is what he does here and that is what is required now.