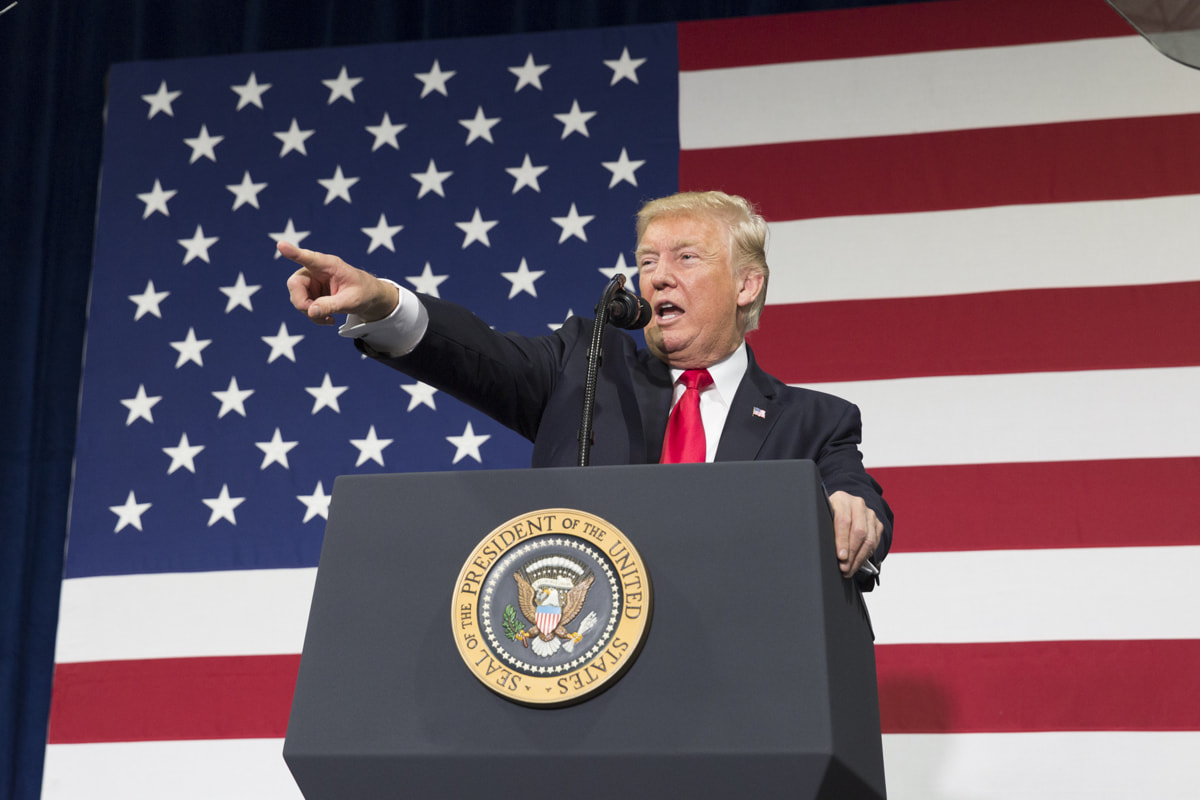 Returning to Washington July 26 for the first time since he left office, President Trump launched the fight to retake our country with all the combativeness he had shown in 2016--but with still more grit, determination, and knowledge. He has learned a lot from seven grueling years of hand-to-hand combat with the globalist oligarchy--after being betrayed by almost all of his own original appointees, and many professed friends. He has been forced to learn the hard way, as he said, that “despite the outside threats, our biggest threat remains evil people within.”

The potency of his return to Satan’s Den on the Potomac, and presentation before the America First Policy Institute (AFPI) can be measured by Washington’s freakout that very day as expressed both in the Washington Post and by Attorney General Merrick Garland. In an “exclusive” the Post headlined that President Trump is now a subject in the Justice Department’s January 6 “investigation.” The piece contained numerous apparent leaks of grand jury materials in contravention of federal law. In an interview with NBC’s Lester Holt, Garland declared that he would not shy away from indicting Trump. As most recognize, the DOJ under the leadership of Garland and, more significantly, Deputy Attorney General Lisa Monaco, has become a rogue inquisition targeting any political opponent of the regime, with Washington D.C.’s federal courts acting as witting accomplices.

The Rupert Murdoch press, including Fox News, the Wall Street Journal, and the New York Post, blacked out what Trump actually said at AFPI, instead covering a pathetic presentation by former Vice-President Mike Pence at the Young America’s Foundation. YAF, the longstanding establishment Republican Party youth organization, is now chaired by former Wisconsin Governor and Koch Industries pawn Scott Walker and funded by such as the DeVos Family. Pence’s speech was covered as a cross-town competition with Trump’s. The alleged competition--DC establishment versus the champion of America’s forgotten men and women--was not even close.

Thus, you will not see any real coverage of Trump’s speech to the America First Policy Institute (AFPI) in the fake news media, because they are too terrified to report on it. CNN said he “made clear he plans to take the country down a dark, demagogic, dystopian road in the coming months.”  The London Independent called it a “weird, hardline, apocalyptic speech.”

Just before the event, one of President Trump’s most loyal and effective advisors, Peter Navarro, had warned his boss not to go through with it, pointing to the disloyalty, and worse, of many of the AFPI leaders.

Probably the worst example is former Louisiana Governor Bobby Jindal, who mouths profound loyalty to President Trump while at the same time openly calling for another Republican to replace him in 2024 as the Republican Presidential nominee.

The rest of the AFPI program presented at its 2022 Summit demonstrated that despite professed loyalty to Trump, those in AFPI who are not on the other side, are trapped in polite Washington think-tank thought, lacking the guts and determination necessary for actual leadership.

But Trump knew all this already. He noted in his speech that he may be “the most persecuted man in history,” but then went on, “If I went back to a life of ease and luxury, and withdrew, and promised never to run for office, the persecution would stop immediately. But I will never do that. I love this country too much to do that. I love you too much to do that.”  Then, defying directly the threats just delivered by official Washington, he reiterated that he was re-elected in 2020 by a much larger margin than in 2016, “but it may be necessary to do it again.”

Like the mythical figure Antaeus, who remained invincible for as long as he maintained contact with the Earth (his mother), President Trump draws strength from his close contact with the American people--and this event showed it again. When the event began, the President received polite and tepid Washington applause in response to his remarks on public safety as he read them from the teleprompter. He then put aside his written speech and spoke spontaneously with overwhelming force about the crisis engulfing the country, provoking wild cheers from an audience now reacting to the presence of an actual defiant leader. As one commentator who viewed the event put it, “He went into that snake pit and converted at least half the snakes.”

“There is a tremendous amount to be done—from reviving our economy, to liberating our energy, to restoring our standing in the world,” Trump began. “But for this afternoon, I want to speak about some of the core elements of our agenda, and in particular, PUBLIC SAFETY. There is no higher priority than cleaning up our streets, controlling our border, stopping the drugs from pouring in, and quickly restoring Law and Order in America.”

In brief summary (readers should watch the speech):

President Trump said the police must be supported, fully funded, and fully staffed while retaining qualified immunity. He called for a return to stop-and-frisk policing. He called for emergency funding to hire and retain tens of thousands of police officers across the country. He called for a joint violent-crime taskforce including the Departments of Justice and Homeland Security.

Our 200,000 drug deaths over just the past two years are far more than the US has lost in any war after World War II. Donald Trump called for the death-penalty for drug traffickers, saying that for every drug-dealer executed, 500 lives are saved. This is standard Republican orthodoxy, but Trump took it a step further in noting that China and Singapore don’t have a problem with rampant drug addiction, a remark most certainly meant to challenge the docile and pacifist assumptions of his audience.

Reflecting the tough stance the President demonstrated he intends, we would recommend, instead, a just war against the cartels and their networks in this country, by the United States with a coalition of nations of the Americas, in the spirit of a proposal of Lyndon LaRouche made under different circumstances in Mexico City in 1985.

Such an actual war could be facilitated by withdrawing most of the 160-180,000 US troops from overseas where our interests are not threatened and redeploying them to our southern border and into such a coalition war. In his speech, President Trump demonstrated his ability to persuade any reluctant governments to join, by recounting how he gained Mexico’s cooperation in closing the border.

Citing the present lawlessness in America’s major cities, Trump said the National Guard should be sent in to maintain order when state governors refuse to do so, and Federal prosecutors should enforce applicable laws when radical state prosecutors refuse.

To retake city streets from homeless encampments with their crime and addiction, he proposed a workable solution where no one else has. Modern, high-quality tent cities, complete with bathrooms and staffed with medical and psychiatric specialists, should be created outside the cities, and the homeless moved into them. The mission should be to inspire them to graduate into work and outside life as soon as possible.

President Trump compared those who proposed placing the homeless in luxury hotels, as some cities are doing, with the “blue ribbon panels” he appointed on the Fentanyl plague, which always failed to make any useful proposals, after countless expensive meetings and lunches. Here he was talking about the sorts of people in his audience whom Peter Navarro had criticized.

He said the crisis of the lawless, open southern border should be tackled successfully, as he did in his first term. There should be the largest-ever increase in the number of ICE (Immigration and Customs Enforcement) officers. Foreign nations must once again be persuaded to accept return of criminals and gangs. For the estimated 15 million illegal aliens who live here now–we will not simply deport them all, said President Trump, “because there’s a thing called humanity.” But the criminals among them should be deported or imprisoned, and there should be significantly increased jail time for repeated immigration violations.

We must race to enact these reforms now, he said, (even before a new presidency in 2025) because our country and are our lives are at stake. We do not have a moment to waste.

Further dictating the agenda for a 2023 Republican Congress, he said our schools must be rescued from Marxist teachers’ unions, parents’ rights must be protected, and the military must rid itself of political correctness and race and gender projects. All Covid type mandates must be banned and those who were fired under them must be rehired, with back pay and an apology.

He called for legislation to make it possible to quickly fire rogue Federal bureaucrats. He reiterated that the mission must be to bring back jobs from offshore havens and re-establish manufacturing and industry. America must return to energy independence and energy dominance with strengthened trade laws, and the President’s tariff powers must be preserved. With respect to election integrity, he said the goal must be voter ID everywhere, and eventually elections by same day voting with paper ballots. Silicon Valley’s censorship regime must be broken, and free speech restored.

In concluding his address, he noted: “The next few years will decide whether we allow a corrupt radical ruling class to snuff out the torch of liberty, or whether we raise it higher and inspire the world.”

“This nation does not belong to them; it belongs to you. Americans fought at Bunker Hill, suffered at Valley Forge, won at Yorktown, and went on to place our flag on the face of the Moon. They gave everything to make America a great nation. But now it is a nation in decline.”

“With all my heart and soul, I firmly believe that the American People will reject a fate of decline, demoralization, and ultimately, defeat. And I believe that we will come together, and choose instead a future of renewal, revival, recovery, resurgence, and in the end, a nation that is more exceptional than ever before.

“America’s story is far from over—and in fact, we are just getting ready for an INCREDIBLE COMEBACK—a comeback that we have no choice but to make.”

As this entire event makes clear, the battle for our country is on, and this time, simply backing Donald Trump and showing up at rallies, will not suffice. Our elites are determined to prevent his second presidency by any means necessary, destroying any semblance of a nation based on the Constitution or laws in the process. Amidst everything else that must be done, the strata of blue-collar workers, farmers, parents, scientists, and engineers –the producers in our society-- must prepare themselves intellectually now to replace the so-called elites and rule this country themselves. We are determined to bring this about.