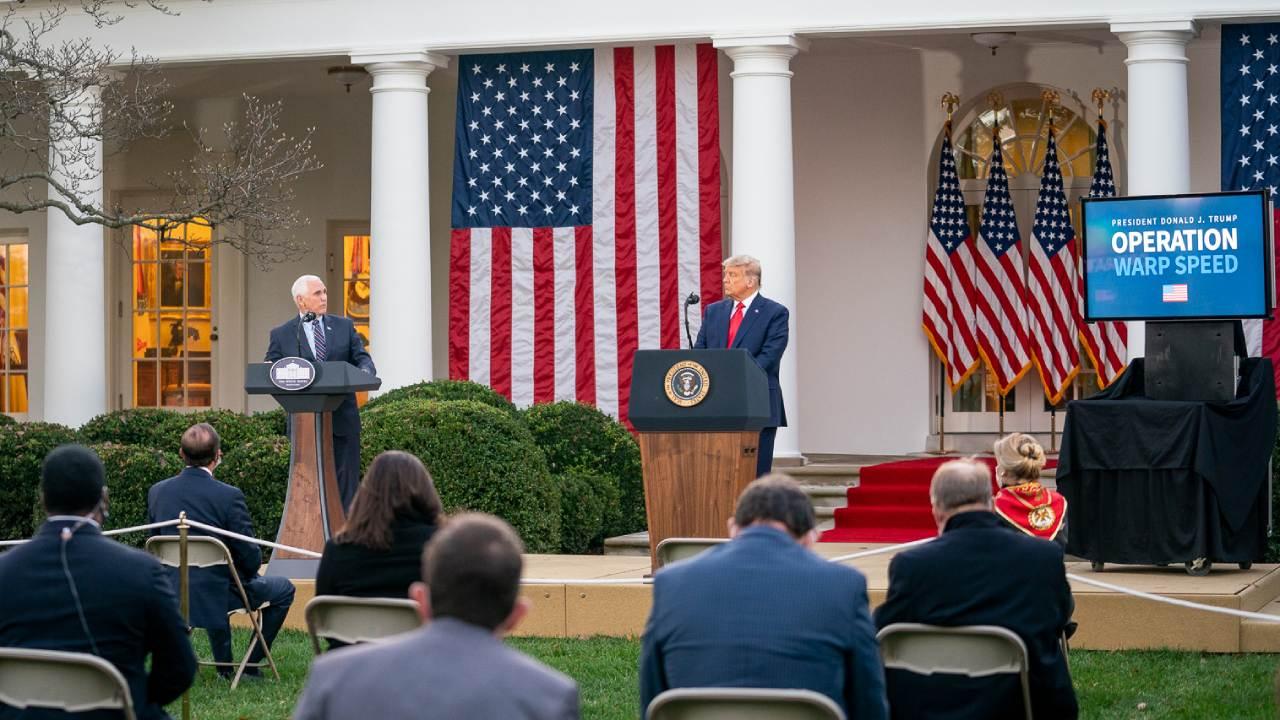 While the November 24 mainstream media spouted the Deep State’s unhinged fantasies about how Donald J. Trump is throwing in the towel because he is allowing Joe Biden to prepare a presidency, the truth is that a Biden presidency has absolutely no legitimacy with more than half of the American people, and not a chance in hell of ever gaining such.

If there is anything we have learned in watching Donald Trump, it is that he does not think linearly—while his morally and mentally challenged opponents almost always do. Our observation is that the President is marking territory for the upcoming fights his Administration and his movement will undertake in the ongoing second American Revolution—the revolt of the population which won a major advance in November 2016. To grasp this, compare what the President is doing and what those who control the senile Joe Biden are telling you they will do. We refer to Biden here, and will do so persistently into the future for any pretensions that he will occupy the Office of the President of the United States, as "The Avatar", because he is not mentally capable of running anything and is instead being run openly by former President Barack Obama and Obama’s associates.

On November 22 the President issued a scathing attack on the Paris Climate Accord in a speech delivered to the leaders of the G20. He said that it was nothing more nor less than an international effort to “kill” the U.S. economy and he was correct in withdrawing from it. He then left the meeting of a body dominated by the world’s current leading scoundrels and played golf. The President has also faced off with the Federal Reserve, which central banks have used to privately control the U.S. economy since the Fed’s inception. Trump is demanding that funds appropriated for COVID relief be clawed back from the Fed, which was using them to bail out the world’s bankrupt banks. Instead, the President wants these funds used for their stated purpose of sustaining Main Street and small business in the devastation resulting from the COVID pandemic.

The Avatar and his controllers have made the Great Reset, sponsored by the world’s oligarchs, the center of their economic policy. Under the banner of the Green New Deal, they propose now to totally control credit and divert it solely to Green economic initiatives—their intended bankers’ dictatorship. This will drive down the energy flux density and population potential of the earth as fossil fuels are phased out in favor of primitive modes of energy production. It is a Malthusian proposal designed to kill millions—even billions—as the result of deliberate underdevelopment. There will be temporary jobs retrofitting existing buildings and infrastructure, as previously demonstrated in the economically flatlining and speculative economic recovery plan pioneered by Obama.

Under Obama, the rich got spectacularly more so while the poor and middle classes got poorer. Rampant drug decriminalization, pornography, de-schooling, and internet “entertainments” are designed to keep the masses pacified. To accomplish his end of the Great Reset, The Avatar proposes to appoint John Kerry, aptly characterized by the New York Post as one of America’s greatest “gas bags,” to a cabinet post as climate czar. He would nominate former Federal Reserve Chair Janet Yellen as Treasury Secretary. At the Fed, Yellen did one thing fanatically: protect Wall Street and the City of London from any regulation while continuing their bailout from the 2008 collapse.

By contrast, President Trump has implemented crash programs to develop, in record time, a vaccine against COVID, and Project Artemis, the plan to colonize and industrialize the Moon and then to proceed to explore and colonize Mars. Crash programs, designed to progressively make significant basic scientific breakthroughs on the frontiers of human knowledge, were the primary means for economic development advocated by Lyndon LaRouche. Both of Trump’s crash programs create huge technological spinoffs to propel continuous economic growth and frontier science. As opposed to The Avatar’s plan for windmills and solar panels, fusion power development can spur a worldwide economic renaissance. Small scale nuclear reactors, under development now, can power whole sections of this country as well as the underdeveloped nations of the world. The Avatar said this week that he would delay Artemis for four years, immediately dismantling the huge and advancing technological workforce which the President has built up.

President Trump’s America First policies have sought to re-establish a sovereign United States. The American foreign policy of our founders was based on this principle: a sovereign United States aiming to establish a community of principle among other sovereign nation states, a community of principle founded in advancing the common good. This was the governing principle of the foreign policy of Benjamin Franklin, John Quincy Adams, Abraham Lincoln, and Franklin Roosevelt. At the end of World War II, FDR proclaimed that he would end, once and for all, the British Empire and its accompanying slavery-based system of wars and colonialism. The idea was otherwise famously encapsulated in JQA’s edict that we, unlike empires, do not go abroad “looking for monsters to destroy.”

Unlike any President since JFK, Donald Trump has attempted to end our forever wars undertaken on behalf of the financial and geopolitical aims of the world’s oligarchs. He has encountered massive resistance directed from the modern British Empire and its Anglophilic allies bunched together in the Washington, D.C. swamp and on the U.S. coasts, who are dedicated to absorbing the United States into a new globalist fascist regime. His failures have been solely the result of compromises he made with the corrupt Washington, D.C. Republican establishment for pragmatic political objectives.

Shortly after the November 3 election, President Trump appointed a new leadership at the Pentagon, firing Mark Esper, and sent in a team to ensure that troop withdrawals proceed in Afghanistan and Iraq. We believe that the President’s men and women are also gathering evidence as to the roles of the Pentagon and the NSA in the ongoing coup against the President, which went full bore after his election in 2016. This coup was preceded by a massive British-housed spying operation on the Trump campaign.

The evidence which could put the seditionists in jail resides in the NSA’s database. The NSA reports to the Defense Department. In addition, the President is implicitly on a course to directly challenge and dismantle the current surveillance state encompassed in the partnership between the Pentagon, the CIA, and Silicon Valley. A big step in making this explicit and winning the day involves pardoning Julian Assange and Edward Snowden and providing amnesty for other whistleblowers to come forward.

On November 23 and 24, The Avatar’s controllers announced a definitive return to the forever wars policy against which Americans revolted when they elected Trump in 2016. This gaggle of war criminals intends to embark on Obama’s Population Wars and Genocide 2.0. The Avatar, squinting and reading from his teleprompter, says that what is new in the Obama/Bush imperial killing and surveillance machine is that it will now include significant leaders who are female or people of color.

First, Tony Blinken was appointed Secretary of State. Beginning in 2016, Blinken was one of the original conspirators pushing the Russiagate hoax against Donald Trump. Under Obama, Blinken was the Deputy Secretary of State. According to Obama, he was “part of our inner circle in on our key meetings throughout my presidency.” He supported the war on Iraq and was one of the key players in drafting the “regime change” war in Syria, which resulted in the U.S. arming Al-Qaeda and ISIS terrorists, giving the world the ISIS scourge, which President Trump finally defeated. Blinken says his biggest regret is not going to full-scale war in Syria, a move which in all probability would have triggered a wider and possibly world-wide confrontation involving the United States and Russia. Blinken was also an avid supporter of the military intervention in Libya which overthrew, sodomized, and assassinated Muammar Gaddafi, destroying that country and destabilizing Southwest Asia and Europe. In April 2015, Blinken supported the Saudi Arabian–led military attack on Yemen, triggering yet another genocide, and he was pivotal in initiating the sanctions against Russia over Crimea. And, last but not least, Blinken was deeply involved in the corrupt Hunter/Joe Biden dealings with Ukraine.

It is impossible to talk about Blinken without talking about his evil twin Michelle Flournoy. Flournoy is viewed as frontrunner for Secretary of Defense. Blinken and Flournoy have been partners in WestExec Advisors, the strategic consultancy they set up with some very dirty sponsors. They navigate defense contracts, defense contractors, and Silicon Valley for Wall Street and City of London pirates while continuing to promote Obama’s satanic foreign schemes. Useful profiles can be found in the American Prospect and at the Grayzone.

Flournoy served as Deputy Assistant Secretary of Defense for Strategy under President Bill Clinton and Under Secretary of Defense for Policy under President Obama. She authored the May 1997 Quadrennial Defense Review, which advocated the unilateral use of military power in defense of U.S. interests. In 2002, a year before the invasion of Iraq, she argued for U.S. preemptive strikes against foreign weapons stockpiles. Under Obama, she crafted the policy of counter-insurgency in Afghanistan and helped persuade President Obama to intervene militarily in Libya. Flournoy supported the imposition of a no-fly zone over Libya to oust Gaddafi. In 2016, Flournoy called for shipping arms to Ukraine and training the Ukrainian military to oppose Russia. She also advocated regime change in Syria, stating, “In our view, there can be no political solution to the Syrian civil war so long as the military balance continues to convince Assad he can remain in power.” Flournoy is personally close to General James Mattis and played a major role, along with WestExec associate Robert Work, in crafting the Pentagon’s new defense doctrine, aimed squarely at war with Russia and China.

The Avatar’s proposed Director of National Intelligence is Avril Haines, a close associate of Flournoy and Blinken who has worked with WestExec. Haines served as the CIA’s deputy director from 2013 to 2015 under traitor John Brennan, and was also Deputy National Security Advisor (where she replaced Blinken). She is personally very close to Brennan who positively gushed about her appointment. She is credited with designing Obama’s antiseptic killing by remote drone assassinations as well as playing a significant role in covering up CIA torture of war prisoners.

Jake Sullivan was named The Avatar’s National Security Adviser. Sullivan told Congress that he played a critical briefing role in feeding out to the mainstream media echo chamber the fake Russiagate conspiracy theories against President Trump. He served as The Avatar’s national security adviser during Obama’s second term and was head of policy planning and deputy chief of staff to Hillary Clinton when she was Secretary of State. In those posts, he played a leading role in advocating U.S. intervention in Libya and Syria and in the coverup of the Benghazi, Libya terrorist attack which killed U.S. Ambassador John Christopher Stevens. Ambassador Stevens was visiting one of the key U.S. arms depots for arming

ISIS and other terrorist mercenaries Obama paid to overthrow the Syrian government. Sullivan also oversaw Joe Biden’s dirty role as proconsul of Ukraine where the Biden family got rich while Biden and his State Department cronies installed neo-Nazis in that country’s defense forces and ethnically cleansed the Donbass in a genocidal civil war. Their goal here has always been regime change in Russia, a recipe that flirts with World War III. Sullivan gained his post-Obama riches by serving an entity called Macro Advisory Partners, a firm founded by former British spy chiefs and London and Wall Street hedge fund operatives.