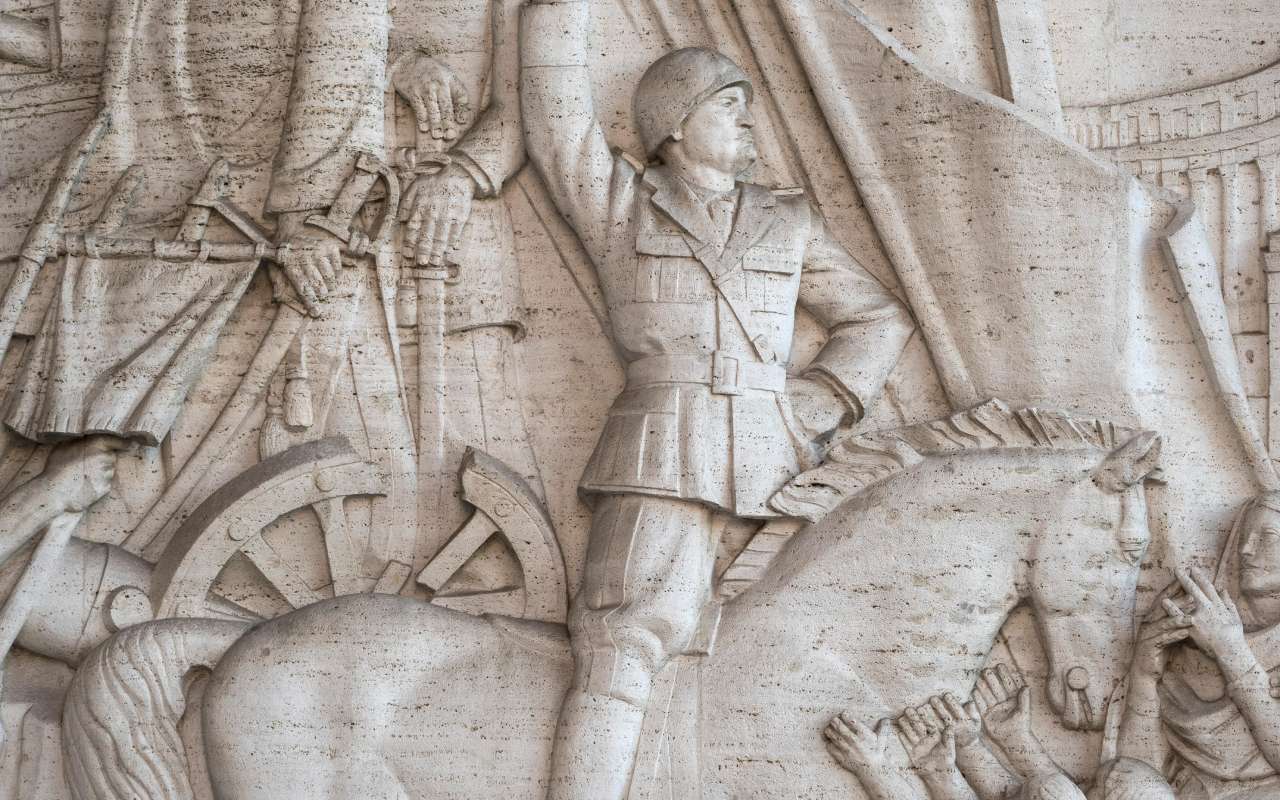 The time has come,' the Walrus said,
To talk of many things:
Of shoes — and ships — and sealing-wax —
Of cabbages — and kings —
And why the sea is boiling hot —
And whether pigs have wings.'

In preparation for the 12 day-long Gathering of the Ghouls in Glasgow, a/k/a the COP-26 summit, heads of state and other leading dignitaries will travel to Rome for a meeting of the Group of 20 (G20) on October 30 and 31.  This meeting will be preceded by a one day conference of the G20 Finance and Health Ministers on October 29, also in Rome.

In reviewing the statements that have been issued by various UN, COP-26, World Economic Forum, and other oligarchical mouthpieces over the course of recent days, a sense of desperation, even near panic, is palpable. COP-26, obviously, will be devoted to the genocidal climate agenda of the oligarchy. The G20 summit, combined with the preceding meeting of Finance and Health Ministers is expected to devote an equal amount of time to the “climate crisis” and the “world health crisis,” centered around the Covid epidemic and with significant input from Tedros Adhanom’s World Health Organization. The stated intention—even demand—is that all participants at the G20 must fall into line on these issues if COP-26 is to be successful. As of now, the prospects for success do not look good.

This Will Not be Audrey Hepburn’s Roman Holiday

Already, four world leaders—Russian President Vladimir Putin, Chinese President Xi Jinping, Mexican President Andrés Manuel López Obrador and Japanese Prime Minister Fumio Kishida—have announced they will not be attending this year's G20 in person. There are also conflicting reports as to the possible attendance of Brazilian President Jair Bolsonaro. Although Xi and Putin have stated that they will participate “virtually,” their absence (and their non-attendance at the subsequent COP-26 Glasgow conference) is causing a gnashing of teeth and probably a loss of bowel control in certain circles, as evidenced by an October 21 Washington Post article “Putin and Xi look set to disengage as world leaders meet on climate.”

Even among those confirmed to attend, any spirit of camaraderie will be confined strictly to photo-op sessions. Turkey’s President Recep Tayyip Erdoğan only last week threatened to expel the ambassadors of ten western nations, including a number who will attend G20, over their support for jailed Turkish dissident Osman Kavala. In fact, U.S.-Turkish relations appear to be at an all-time low, with Erdogan denouncing American support for the Syrian Kurds and suggesting that he might buy a second S-400 missile defense system from Russia, just last week.

France, meanwhile, is very bitter and seething with anger against the United States, the United Kingdom and Australia over the AUKUS submarine deal, with top French and Australian officials now not even speaking to one another. At the same time, France is involved in a second dispute with Britain, this one over fishing rights in the English Channel. The French navy has already seized one British ship and warned others, and on October 28 the British government summoned the French ambassador “to explain threats made against the United Kingdom,” as the crisis escalates.

On the surface, India would appear to be onboard the globalist agenda, with Prime Minister Narendra Modi pledged to attend both the G20 summit and the COP-26 conference, and Finance Minister Nirmala Sitharaman making public statements backing “green initiatives,” but India, with its heavy reliance on coal for generating electricity, is one of the major truants in failing to update its commitments to cut CO2 emissions.  Any significant reduction of carbon emissions will have a murderous effect on India’s 1.4 billion people, and Indian officials are well aware of that reality. U.N. officials have repeatedly named India as one of the worst offenders against the “climate change” agenda.

One thing that is not new, but which is now abundantly clear, is that the drive to impose top-down green fascism on the human species is coming almost entirely from the oligarchy of Great Britain and the European Union. The imperial drive from London and the cultural pessimism of western Europe now poses the greatest threat to the human species. This is a fascist agenda, and it is coming from Europe.

The overthrow of Donald Trump and the installation of the senile Joe Biden has temporarily added American weight to this European drive, but the continuing resistance in Congress to Biden’s green agenda is causing extreme worry among the Malthusians, and the increasing support for Donald Trump’s movement signals that the Biden project may be very short-lived. This is, no doubt, why there is now such a plethora of hysterical pronouncements that COP-26 is a “do or die” event. The oligarchy is frantically attempting to lock in their carbon reduction policy, and as the days pass, one by one, their hysteria only deepens.

A Rose by Any Other Name

Writing on the Project Syndicate website on October 19, the one-time Harvard wunderkind Jeffrey Sachs was most explicit as to the imperial agenda. Sachs, who gained his position within the establishment by helping to impose economic “shock therapy” on Eastern Europe after the fall of the Berlin wall, is now reborn as one of the world’s “leading experts” in “sustainable development,” a euphemism for genocide.

In an article titled “The G20 and the Means to Climate Safety,” Sachs is extraordinarily frank in his demand that governments must be coerced, by any means necessary, to implement the COP-26 program. He says, “Governments must regulate. There is no need or justification for new fossil-fuel investments. Period. Governments must finance – at scale – zero-carbon infrastructure;  Rich-country governments must help finance poorer countries’ efforts to make the needed investments;  Developed countries should compensate the developing world for the climate damages.”

He continues, “So far, governments are failing miserably to do their part. In the inimitable words of Greta Thunberg, they need to move beyond ‘Blah, blah, blah’ . . . Many governments are taking some steps in the right direction. THE EU IS IN THE LEAD, with the European Green Deal, which pledges the EU to achieve net-zero emissions by 2050.

“The U.S. is showing signs of another massive political failure to tackle climate change, despite Biden’s efforts. Since ratifying the UN Framework Convention on Climate Change in 1992, the US Senate has blocked any action to implement the treaty and the Paris climate agreement.

“Many G20 governments are ready to act, and they should call out the laggards. The U.S. should be put on notice that America’s failed response is intolerable to the rest of the world. And the same message should be conveyed to Australia, India, and Saudi Arabia. There can be no tolerance for climate corruption and impunity in a world on fire.”

About five weeks prior to Sachs’ diatribe, the G20 Health Ministers met in Rome and on September 5 issued a statement they called the “Pact of Rome.”  Ostensibly, the agreement was designed to create a world-wide Covid vaccination framework, but the meeting was led by Italian Health Minister Roberto Speranza, and in his official statement Speranza called for the adoption of a “One-Health” approach. He said, “We want to invest in the One Health approach, looking at human beings, animals and the environment as a single ecosystem to respond to the health emergencies of today and tomorrow.”  So, it is now very clear that when the United Nations and the World Health Organization talk about “world health,” this is to be defined as a “green” health system, in which the “health” of the environment is placed on an equal, or superior footing, with the health of human beings.

It also must be noted, although this should surprise no one since it is by design, that the agenda of the world leaders gathered at the G20 in Rome will be very sparse as to any discussion of the profound physical economic crisis gripping the world and threatening you, your family, nation states and hundreds of millions human beings. The breakdown in supply chains, the electricity blackouts, homelessness, the insolvency of the global financial system, —in other words, the kinds of things one might expect Presidents and Prime Ministers to address—will be marginalized, if discussed at all.

Instead, as Sachs would insist, nations will be told to obey the UN and COP-26 diktats.

Trouble on the Tiber

An ominous sign for the G20 summit occurred, without warning, on October 28 when President Joe Biden arrived at the Vatican for a meeting with Pope Francis. Normally, in past years, such high-level visits were the cause of great pomp and circumstance, including in recent decades full live television coverage. However, at the last minute, Vatican officials announced that they were cancelling all live coverage of the event, including prohibiting any coverage of Biden actually speaking with the Pope. No reason was given.

The green Pope certainly does not have any problem with Biden’s climate agenda, so speculation about this very unprecedented change has ranged from Papal displeasure at Biden’s pro-abortion stance, to a conspiracy of Vatican cardinals attempting to sabotage the meeting, to a secret request by Biden’s handlers to keep the cameras away because of Biden’s deteriorating condition. No one really knows. When Biden arrived at St. Peter’s Basilica he was greeted by a lone nondescript monsignor and led inside, with no reporters allowed to follow. Very odd is an understatement.

Even stranger is the revelation that the entire G20 summit will take place in a neighborhood planned and constructed by Benito Mussolini as a fascist showcase. Designed as a huge pentagon, the EUR neighborhood was supposed to represent what Mussolini considered to be an ideal city, and leading fascist architects and city planners were brought in to design the buildings, fountains, boulevards, and plazas. Mussolini planted a tree at the 1938 groundbreaking.

The district still contains fascist markers, some with quotations from Mussolini’s speeches, and the most striking feature is a towering bas-relief sculpture, narrating the long history of Rome. There is one dominant image: Mussolini on horseback, surrounded by soldiers, as children and women lift their hands to honor him.

Perhaps the delegates will find inspiration in this as they walk past it to attend sessions of the G20 conference.