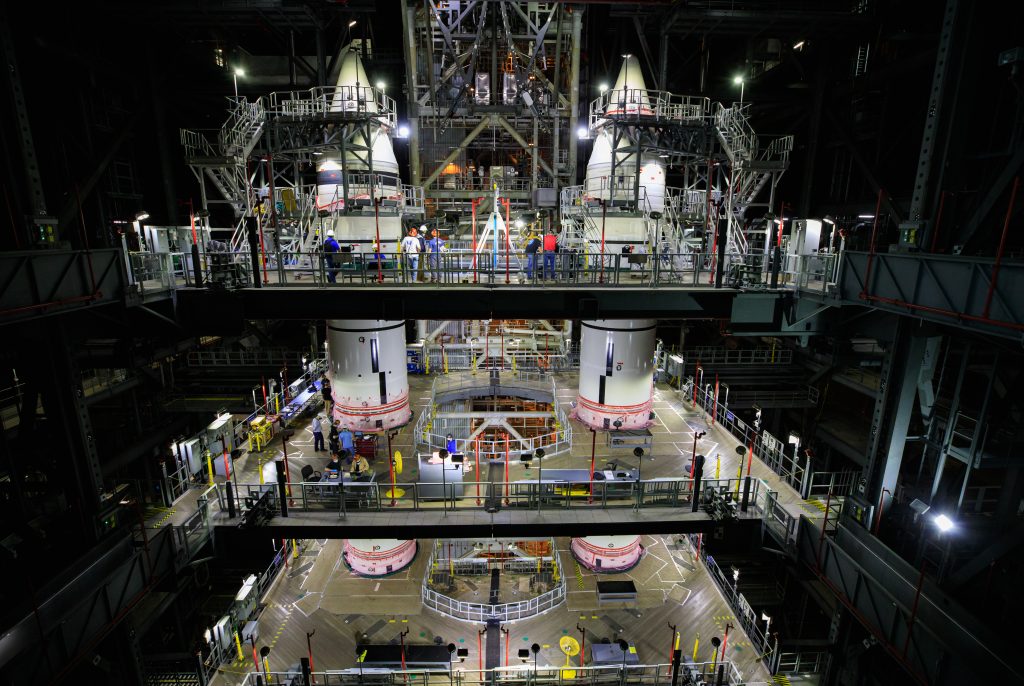 The 2017 initiation by President Trump of the Artemis Project (which reflected Lyndon LaRouche’s 1988 proposal to build a city on Mars) created a vortex which is organizing both the national and world economy around a process of continuous and accelerating progress–”the pursuit of happiness.”

Our job today is to ensure that President Trump’s Artemis Project is not slowed down from a vortex into a mere whirlpool by the various operations being run through Washington under its current state of occupation. Fortunately, the momentum of the vortex is now such that our growing movement to re-Americanize the American Economy should be able to maintain momentum until control of Washington is restored to the people–barring an uncontrolled collapse of the financial system and a drying up of capital and credit.

The successful deployment of the James Webb Space Telescope provides an encouraging backdrop for the rapid progress in the Artemis Project. Both the Artemis I launch of a Space Launch System (SLS) rocket to propel an unmanned Orion spacecraft around the Moon, and the first orbital launch of the Starship/Superheavy reusable rocket system, should take place as early as this March. Both of these systems are in the Saturn V class. In the Artemis III mission, an Orion spacecraft with crew will rendezvous in lunar orbit with a modified Starship, called the Human Landing System (HLS), to take astronauts down to the lunar surface for the first time since 1972.

The SLS/Orion system is much further along in development, but the Starship/Superheavy system is undergoing rapid development and constant improvement—despite bureaucratic environmental sabotage. Already, the precursor to the Starship/Superheavy, the Falcon 9, has companies from Russia, to Europe, to China attempting to mimic its design. The partial reusability of the Falcon 9 has led to a cost-per-kilogram-to-orbit reduction in the order of a factor of 10. The giant Starship/Superheavy rocket, with its intended complete and rapid reusability, aims to lower costs per kilogram by a factor of 100.

The company and leadership behind these two rocket systems, the once-ridiculed SpaceX and Elon Musk, have jolted other companies out of City of London/Wall Street-induced stupor and into active research and development.

Besides the two new rocket systems already mentioned, 2022 should see the first launch of the partially reusable United Launch Alliance Vulcan Centaur rocket and the Blue Origin New Glenn rocket. Also this year, we expect to see the first successful launch of the Boeing Starliner and of the Sierra Space Dream-Chaser cargo spaceplane to the International Space Station. American, Russian, Indian, and Japanese landers will arrive on the Moon this year. A joint European/Russian rover/lander mission will be launched to Mars. China will complete its Tiangong space station and launch the first Long March 6a rocket. These are just a few highlights expected in the next months as activity keeps building up in intensity. In 2023, India is expected to launch its first unmanned Gaganyaan crewed spacecraft as it moves to join the ranks of nations with human spacecraft capabilities.

By the end of this decade there will be three to five space stations in Earth orbit, one in Lunar orbit, and at least two Lunar bases of some sort. There will be tens of thousands of satellites in Earth orbit. All the while the cost of all this will be dropping, the returns to the people on Earth will be accelerating, and the Mars vortex will be sucking us closer to building an actual city there.

The vortex is downgrading the influence of MBAs and Wall Street over industry. It is forcing more and more recognition that the source of prosperity lies not in clever financial calculations, but in giving more weight to the ideas–including some which may draw initial ridicule–of scientific/engineering and production people. Production people are being pulled upward. The situation is very much like the process which took place during World War II, in which the war vortex pulled people upward within production organizations–unskilled workers became skilled workers, skilled workers became engineers, engineers became scientists, and so forth.

Of course, young people with ideas from around the world are being drawn into America to contribute. People are also being drawn into creating new companies, or into quitting dead-end jobs to seek employment at a company drawn into the vortex. Such companies include not only directly space-related companies, but also nuclear, fusion, electronic/photonic, robotic, aerospace and other companies. The success (both physical and financial) of SpaceX in doing the impossible, has encouraged both entrepreneurs and investors here and abroad to reach for impossible objectives. There are now hundreds of new companies in this class across America, but also around the world.

We are a long way from any concept of the “ultimate rocket,” “ultimate spacecraft,” or any other “ultimate” space-related device. There are many approaches which could supersede what is ongoing at SpaceX in particular applications: air-breathing, rocket engine-powered spaceplanes, fission- and fusion-powered rockets, spin- or maglev-based launch systems, various forms of electric propulsion and others. We are not talking about commodities here. The vortex of rapid design-change and innovation promotes either in-house or local production of parts. In such rapid development, attempting to outsource or offshore production will not work. By the time the part you ordered from abroad arrives, that part may have been made obsolete by a better design.

More and more individuals and companies, even finance people, are coming to realize that the surest way to bankruptcy and irrelevancy is to ignore the progress taking place in many, many fields, and just keep doing what you have been doing. So the Mars vortex is pulling people, companies, and even nations forward—including in industries not directly related to space.

In the American aerospace industry, it is common for companies to both compete in some areas, while also cooperating on specific projects which combine the unique strengths of particular companies in accomplishing a project. Such companies in simultaneous competition and cooperation are called competimates. Similarly, the Artemis Project is pulling in mutually competitive nations and companies into the Mars vortex. Terraforming and colonizing Mars is the biggest project in the history of mankind. Every nation, company or individual who wishes to participate will be involved in some way. In particular, the role of NASA and American industry is to create a vortex of activity centered upon addressing the major hurdles to be overcome. Both cooperation and competition will be involved, but if we are plunging boldly ahead, all of the various capabilities and players, like formation-flying Canadian geese, will find a place in which to contribute and thrive.

Yes, there will be attempts to copy, reverse engineer, outmaneuver, etc.—but such efforts are good, not bad. Remember that young man from England, Samuel Slater, who defied the British Empire’s bans to bring textile machinery technology to the young United States. Technology transfers cannot be stopped (remember that dissemination of new technologies is one of NASA’s purposes), and the more broadly that know-how is distributed across society and societies, the greater is the qualified creativity that will be available to apply to the problems yet to be solved–and we are going to need to stretch all of the capabilities on Earth.

Of course, some private initiatives will still pursue patent protections, but even patents, by forcing the non-patent holders to take alternate approaches, can indirectly lead to new breakthroughs. A great example of the way this works is the case of Lee de Forest and the development of the first electronic amplification device–the Audion tube. De Forest was working to build a company in the wireless telegraphy business. In 1905 he developed a radio “detector” device which was very similar to a previously patented device. His only option to bypass a patent fight, was to try various modifications and additions to his device. Finally, he added to his vacuum tube a third element—the “grid.” He did not initially recognize the significance of his creation, but this Audion tube became the basis of the electronics industry, until it was superseded by the transistor. It was the first device capable of amplification—or put another way, causing a powerful current to mimic the characteristics of a weak current.

However, as telegraphy morphed into electrification, electronics, digital computing, and eventually the connected world of the 21st century, technology became more and more complex. As was recognized by Thomas Edison, Edward Teller, and later in the computer software world, an undue application of secrecy and patent protections becomes counterproductive as levels of complexity increase. Electronics/software patent fights still take place, but today the vast majority of electronic devices run basic software which was made freely available by its creators in order to facilitate its widespread use. (Imagine the state of construction, if basic tools like hammers, levels, drills and saws were patented!) The greatest levels of advancement in every respect, come from rapid and wide-open intense efforts to solve problems. As we move forward in re-Americanizing our economy and intensifying the effects of the Mars vortex, we will realize, as we did with software, that most of the fear-mongering, the limitations upon cooperation, the secrecy, the excessive patents, like the British-instigated little wars, serve only the British Empire, not the United States.

We must also recognize that the growing impoverishment we have suffered since our last Moon landings has not been due to actions of Mexico, China or Korea, but has been due to the fact that both our government and our financial institutions have complied with, and operated according to the instructions, or “fashions,” handed down by the British Empire. Once we reclaim the government and financial system for America and Americans by implementing LaRouche PAC’s program, we reclaim control over our own destiny, and need not fear what any other country might do economically. Such fear-mongering is just another Imperial operation to stir up artificial divisions among the four leading republics–the United States, Russia, China, and India–long identified by Lyndon LaRouche as uniquely powerful enough, when acting in concert, to finally shut down the British Empire. The vortex we are creating around the colonization of Mars, is bringing out the best from among ourselves, but also from such competimates as China, Russia, Japan, Europe, etc. The sooner we remove some of the artificial barriers to cooperation, the faster the vortex can spin and the sooner we will have a city on Mars.