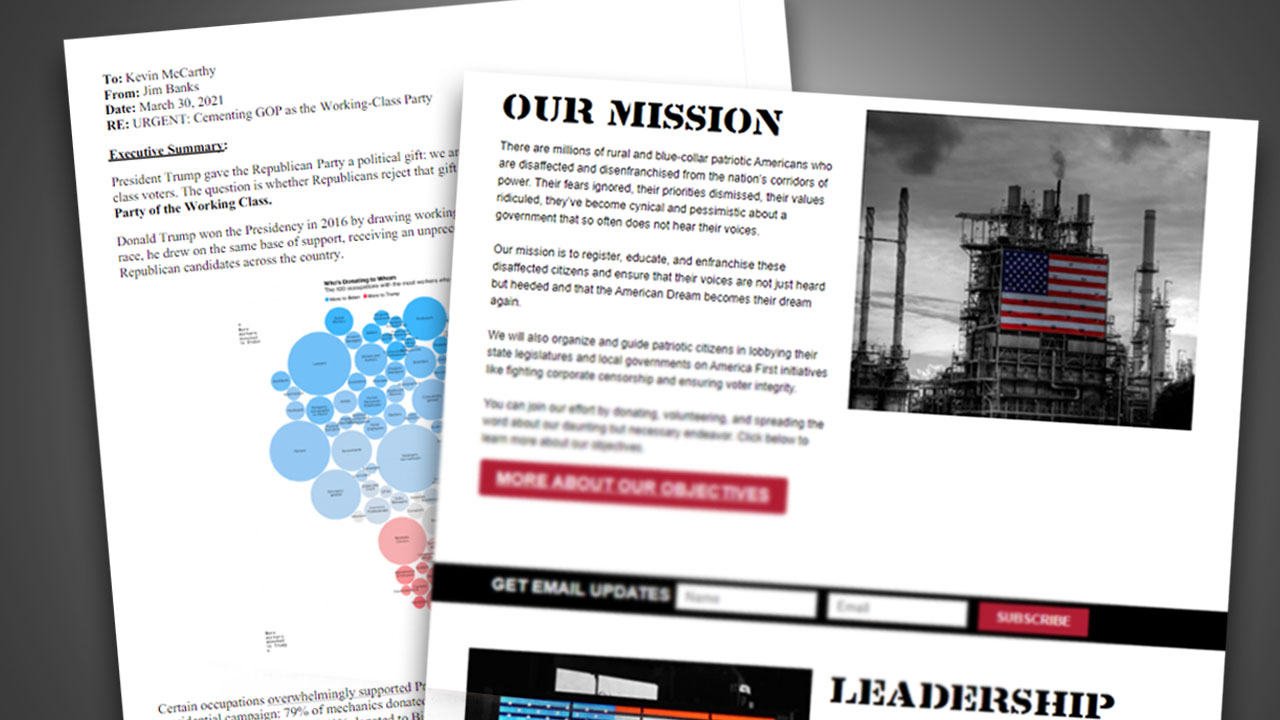 The control that the global elites have held over the American political landscape has, for now, shattered. On March 30, U.S. Representative Jim Banks (R-IN) sent the following memo to House Minority Leader Kevin McCarthy: “URGENT: Cementing GOP as the Working Class Party.” This comes in the wake of the formation of “Look Ahead America,” an organization launched by former Trump campaign staffers, whose mission statement is to give a voice to the “millions of rural and blue-collar patriotic Americans who are disaffected and disenfranchised from the nation’s corridors of power.”

These are among the most explicit indications coming from Trump layers that the old political division of the nation is over. Throughout most of our nation’s history, the British Empire has exercised its control over the United States by dividing the producing classes against each other. Abraham Lincoln’s creation of a Republican Party, composed of workers, farmers, and manufacturers, and Franklin Roosevelt’s realignment of workers, minorities, farmers, and entrepreneurs against Wall Street, are among the few times that that division has been surmounted.

And, whenever the producers have been united against the parasites of Wall Street and the City of London, the nation has made incredible leaps upward in its economic platform. The Transcontinental Railroad, the Tennessee Valley Authority, and the Apollo Moon Mission are the most singular examples.

Donald Trump was and is feared by the Empire because his election victories (among which we count 2020) were based on blue collar, minority, and independent voters abandoning the Democratic Party of the billionaires and bankers, and voting for him. And he was feared for his aborted intention to return to the American System of Alexander Hamilton and Abraham Lincoln.

LaRouchePAC is leading the fight to make that realignment and the economic policies which must ground it, permanent and conscious. Our new “Citizen’s Primer: First Principles for Taking the Nation Back,” challenges the millions of mobilized and self-activating Americans to arm themselves with the powerful weapons of the American System:

"The political realignment will not work without an economic realignment, which unites the producers, the builders, and the creators, against the speculators and parasites of Wall Street, Silicon Valley, the City of London, and those who do their bidding inside the Beltway. This means a recommitment to (and, in many cases, a rediscovery of) the American System of Political Economy....”

Anatomy of a Political Revolution

Congressman Banks’ memo to the Republican House leadership is a must-read for anyone who is still cowed by the “power” of big-money or the Democrats’ propaganda machine. Among its key elements:

“President Trump gave the Republican Party a political gift: we are now the party supported by most working-class voters. The question is whether Republicans reject that gift or unwrap it and permanently become the Party of the Working Class.”

He asserts that Trump has caused a “paradigm reversal” which isn’t going away and that both parties are undergoing a permanent transformation which is documented in these dramatic shifts in the votes of White, Hispanic, and Black blue collar workers to Trump.

The Congressman’s political conclusions are valid. Particularly interesting is his discovery that campaigns can be funded by individual donations and not big corporate money and that Republicans should drive home the fact that Democrats will be forever beholden to the elites.

“The Democrat Party today is more vulnerable than it’s been in modern history. Democrats’ agenda is now shaped entirely by corporate interests and radical, elite cultural mores, but they still rely on many blue-collar voters.... Democrats will keep alienating working-class voters because that’s what their donors demand, and Republicans should welcome them with open arms by fully embracing an agenda that’s worthy of their support.”

But, in “fully embracing an agenda that’s worthy of their support,” we run into the continuing weakness of so many in the Trump movement. Banks falls victim to the prevailing ideology that the choice is between “free market” and “state intervention.”

As LaRouchePAC’s Citizens Primer makes clear, this is “fake economics.” The real choice is between the American System, which is based on creativity-driven advances in physical production, versus the British System of “anything goes if it makes a profit” free market policies, which are not free, but controlled by the private interests who run the central banks and monetary systems. The elimination of the “language of the American System” from our vocabulary over the past century or so has left people like Representative Banks unequipped to embrace an economic agenda which is actually worthy of working-class support.

That defines the fight before us and our Primer concludes with the following challenge:

“This is where you come in. Together, we must change the very language of economic discussion, by building a movement conscious of the difference between the American System and the Wall Street/globalist/imperial policies of the British System, a movement which is prepared to fight to finish the American Revolution.”

We need your help to intervene into what is a truly historic realignment, with ideas, with literature and with the passion needed to save this nation.

Make a contribution to LaRouchePAC today.