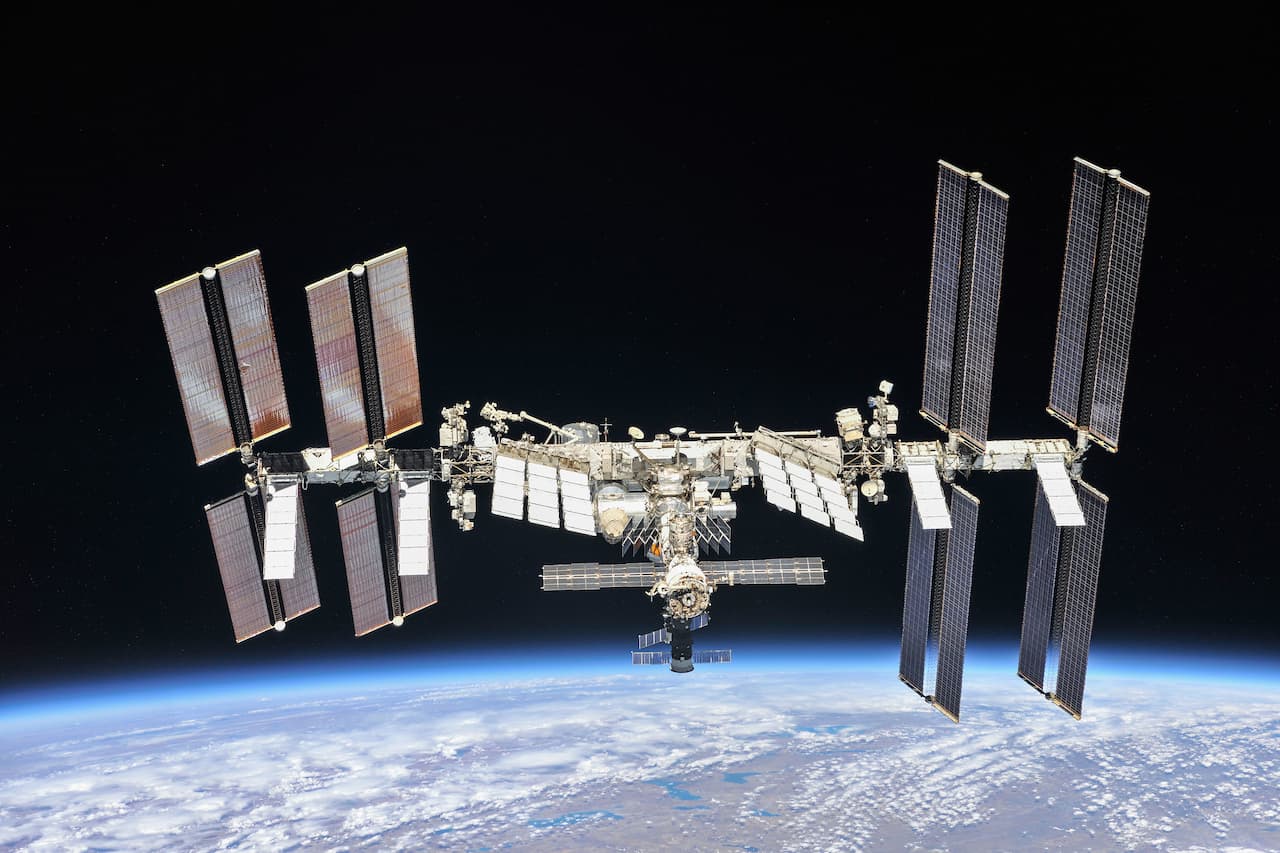 The United States space agency, NASA, and Russia’s Space agency, Roscosmos, have cooperated for over two decades on the International Space Station (ISS). The two nations, along with a number of other nations which have worked together to build and operate the ISS, have contributed to breakthrough science and other experimental endeavors that are transforming the living standard of human beings here on earth. The cooperation has certainly not gone without periods of tension, but it is well understood that having two of the most powerful nations on the planet, the two leading nuclear powers, working together is for the good of all.

Tensions between the Biden collective, its NATO, and other allies on one side, and Russia on the other, have escalated over the recent period–especially as Biden and NATO have egged on Ukraine in its war with Russia, imposed unprecedented sanctions on Russia, and poured out billions of dollars of military aid to Ukraine. From the Russian point of view, it is in an existential war for survival against the entire NATO alliance. There has even been talk of the use of nuclear weapons in this situation. Meanwhile, the whole of Europe is in total disarray as a result of the sanctions, and there is no place in the world that is not being impacted by this orchestrated conflict. After the recent speeches given by Russian President Vladimir Putin to the Russian people, and by U.S. President Biden to the United Nations General Assembly, one might  think that all hope was lost for any cooperation and peace. This is not so.

Just two months ago NASA and the Russian Space agency Roscosmos, signed an agreement to integrate flights to the ISS. That agreement allows Russian cosmonauts to fly on U.S. spacecraft in exchange for U.S. astronauts flying on Russia’s Soyuz spacecraft. This will be the first agreement to swap rides to the Space Station since the end of the Shuttle program. In the interim before the first crewed flight of the SpaceX Dragon Demo-2 flight in May of 2020, the United States had depended on paying Russia for seats on their Soyuz spacecraft to transport American astronauts to the ISS. Although commercial crewed spaceflight missions to the ISS had been long in the works, it wasn’t until President Trump came into office with the leadership of NASA Administrator Jim Bridenstine, and the push for the Artemis Lunar Mission, that the program really took off. Following the Demo-2 flight, SpaceX has flown 4 additional crewed missions to the ISS. The launch of Crew-5, set to go in October, will be the first launch of a Russian Cosmonaut aboard a U.S. spacecraft since the new agreement was signed.

On September 21, U.S. astronaut Dr. Frank Rubio lifted off for the ISS from the Baikonur Cosmodrome in Kazakhstan, aboard Russia’s MS-22 Soyuz spacecraft, flying alongside Russian Cosmonauts Sergey Prokopyev and Demitry Petelin. The crew reached orbit after 9 minutes and docked their Soyuz spacecraft with the Rassvet Mini-Research Module 1 just over three hours later.

You may be asking, “wait, how long did they take to do that? It usually takes two days–right?” Yes. Without going through the entire history, the short of it is that in 2013 the Russians did figure out how to master one-day-rendezvous missions. The 2-day-rendezvous missions aboard Soyuz took a toll on the cosmonauts. A two day pre-docking period had originally been established to give the crews time to adjust. In the two-day pre-docking period, the spacecraft would make 34 rotations around the Earth, ascending higher and higher until the spacecraft would reach the ISS. Meanwhile the station would be continuously moving along at its own speed. Eventually after some calculated maneuvers the spacecraft would catch up with the ISS. Docking would take place during the 34th orbit.

RSC Energia, a Russian manufacturer of spacecraft and space station components, started working on plans to cut down the number of orbits required before docking, with the idea that an earlier docking would make the flight easier on the crew. It was found that any motion sickness experienced by the crew would pass by around the fifth or sixth orbit. The objective became to get the craft docked with the ISS before it would pass into the “deaf zone”—where communication with Moscow’s mission control is lost. For flights from Baikonur the “deaf zone” begins after the 5th revolution. Roscosmos worked to get the Soyuz into a phasing orbit immediately after launch, so that the spacecraft would be able to make an autonomous rendezvous with the ISS on the fourth orbit.  This method would put the crew at the ISS in approximately six hours.

Experts continued to work on reducing the number of orbits needed before docking with the ISS.  Then, a plan was devised to cut the time from six hours to three hours. This was achieved with the introduction of the Soyuz 2.1 rocket developed in 2016. Because of its precision maneuvers and great accuracy, two orbital correction burns and three hours were saved. The first ever ultra fast flight to the ISS took place on October 14, 2020 with Cosmonauts Rzyhikov and Kud-Sverchkov along with NASA astronaut Rubins on the MS-17 mission flown atop a Soyuz 2.1a rocket. The crew docked with the ISS in 3 hours and 3 mins.

The  Soyuz MS-22 crew launched on September 21, 2022, became the first flight to the ISS under the newly signed agreement for shared space flights–also docking with the ISS in just over 3 hours. The new crew joined the Expedition 67 crew on board the station and are scheduled to spend six months in orbit.  During a NASA press conference, Astronaut Frank Rubio said, “I think this crew swap really represents the ongoing effort of the tremendous teams on both sides and amazing people that made this happen.” “I think it’s important when we’re at moments of possible tension elsewhere that human spaceflight and exploration–something both agencies are incredibly passionate about–remains a form of diplomacy and partnership where we can find common ground and keep achieving things together,” he stated. He also spoke of the great excitement about the entire mission, and looked forward to working on experiments on board ISS, such as the biofabrication experiment, increasing the ability to produce human organs that “would just be phenomenal in our capability to deal with human disease back here on Earth.” The agreement signed back in July, “is in the interests of Russia and the United States and will promote the development of cooperation within the framework of the ISS program.” In a statement Roscosmos added that the agreement will facilitate the “exploration of outer space for peaceful purposes.”

A statement from NASA read, “The station was designed to be interdependent and relies on contributions from each space agency to function. No one agency has the capability to function independent of the others.” NASA’s SpaceX Crew-5  astronauts are readying for their historic mission scheduled to launch on October 3 with Russian female Cosmonaut Anna Kikina in one of the four seats along with two American astronauts, and a Japanese astronaut from JAXA. Kikina will be the first Russian to fly on a U.S. built spacecraft following the crew swap agreements signed.

The role of cooperation in space exploration has long been understood as the key to peaceful relations among nations. In Lyndon LaRouche’s 40-year Mars colonization program, the central feature was the fostering of scientific and technological discoveries that would transform economic and social processes here on earth, and the fostering of our ability to work and live in space, utilizing the resources of the Moon and Mars. In a draft memorandum of agreement between the U.S. and the U.S.S.R presented as part of “The LaRouche Doctrine” in 1984, LaRouche starts the document outlining the General conditions for peace: “The political foundation for durable peace must be: a) The unconditional sovereignty of each and all nation-states, and b) Cooperation among sovereign nation-states to the effect of promoting unlimited opportunities to participate in the benefits of technological progress, to the mutual benefit of each and all.”

Another indispensable area of cooperation is in planetary defense. NASA’s Double Asteroid Redirection Test (DART), the world’s first mission to test technology for defending Earth against potential asteroid or comet hazards, will impact its target asteroid on September 26. The findings from this mission will help not just the United States, but all nations understand and plan against the potential threats to our planet posed by the impact of such NEO’s.