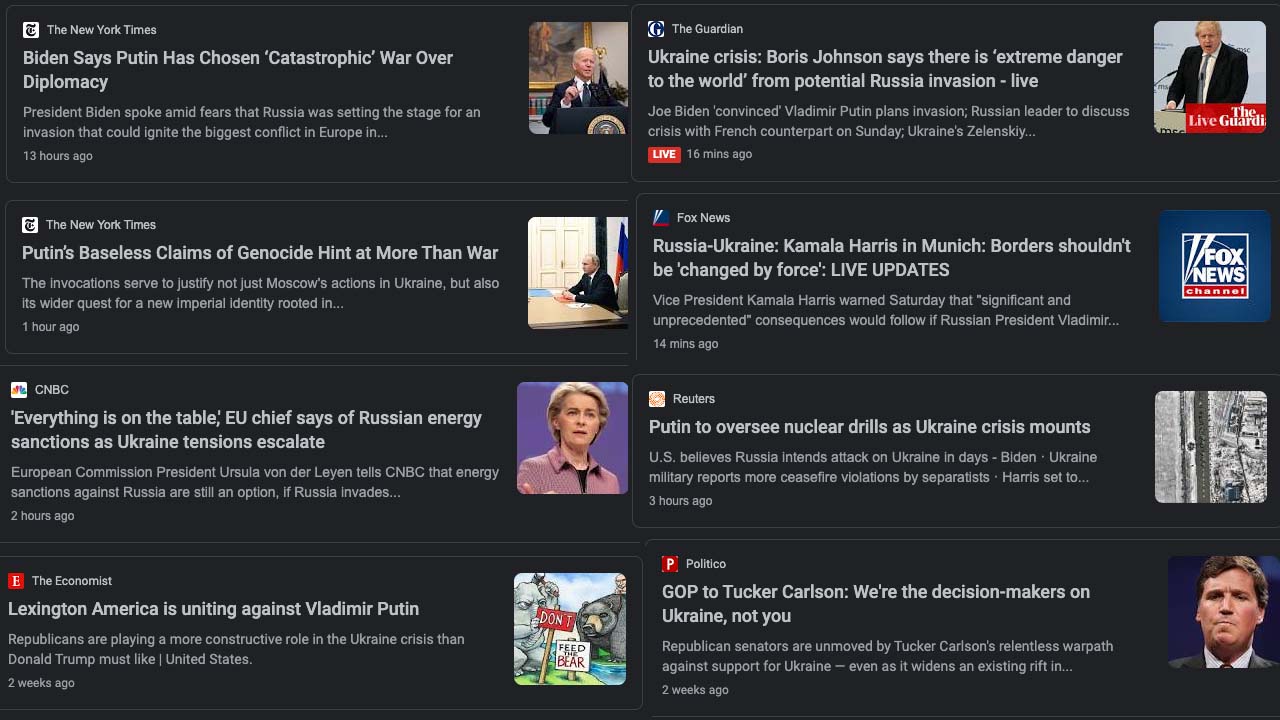 It is the oldest ploy in the book of empire. A failed elite, a failed presidency, confronted at every turn by a population in revolt, creates a foreign emergency, even a war, in an attempt to regain its hold on power and on its population. An evil enemy (portrayed as the scariest of monsters) is to blame for the ills which confront you, they argue, not us. The best reflection on the desperation now dominating the Biden Administration and Washington’s establishment concerning Russia and Ukraine, is seen in the fact that in San Francisco, this week, three progressive members of the school board were recalled. The vote was overwhelming. It was not done by Republicans, obviously, but by sane people of all political stripes interested in seeing their children educated. In San Francisco, of all places.

Or, if you will, you can just look at Canada ---Canada, of all places, in full-throated revolt-- and the jack boot totalitarian reaction of that elite to a peaceful protest by truckers who started out just trying to get ludicrous COVID mandates off their backs. In addition to the very vocal demands for just such a fascist reaction to the truckers by Joe Biden’s fascist minions here, uber globalist banker and UN Climate Czar Mark Carney and Canada’s Deputy Premier Chrystia Freeland played major roles in formulating it. Both are major players in the World Economic Forum. Freeland’s beloved grandfather was a Nazi.

Right now, that fascist overreaction could spell the doom of the Trudeau government and has mobilized people throughout the world to fight for their freedom.

As for what we are experiencing regarding the contrived hysteria around imminent war in Ukraine, General Jack Keane, who has been a dimwitted neocon mouthpiece since his retirement, let the cat out of the bag in a Feb. 16 Fox News interview with a surprised Harris Faulkner.

He told her that Washington’s day-after-day, relentless insistence that the Russians would invade Ukraine on Feb. 16 was a “US information campaign releasing classified information to gain dominance over Russia.” In other words, it is all propaganda and manufactured narratives and word games. Keane called it an “unprecedented campaign.” Faulkner, highlighting the unreality Keane was celebrating, protested that the American people had been kept in the dark, saying “What you have been saying is the complete opposite to what we have been told. All of that was on purpose?” “Absolutely,” replied Keane.

Within this “information campaign,” Keane singled out the Biden administration report that Russia was preparing a phony video of a false-flag attack on their own forces, but especially the panic-inducing “emphasis on an attack as imminent,” as master strokes. This “imminent” full scale invasion hype continues to the moment of this writing, two days after that attack was supposed to have occurred–with certainty--on Feb. 16. At present, this campaign of hysteria has resulted in many prominent Ukrainians fleeing the country, massive capital flight, and further damage to the country’s already decimated and collapsing economy. Hence, the protests you hear from Ukrainian President Zelensky pleading against the idea of any imminent invasion of the country. On the eve of what the United States says is imminent war, he is leaving Ukraine over the weekend to attend the Munich Security Conference.

Now, in the afternoon of February 18th, February 16th having come and gone, President Biden has just appeared yet again at the White House podium to assure us, in the most somber tones his teleprompter can invoke, that he knows the next stage of this drama and that “Putin has made up his mind” and decided to “invade.” He admits that he can’t read Putin’s mind and says the path to a diplomatic solution is still open.

Those familiar with Ukraine know that Russia has no plans to take over the country or re-create the Soviet Union as heard on every TV and radio in this country over the past week. Ukraine is an economic basket case which only huge chunks of western aid presently sustain. Those familiar with U.S. and British plans know full well that Kyiv has well over 100,000 troops amassed on the line-of-contact in southeast Ukraine aimed at the independent republics in the Donbass, Luhansk and Donetsk, and that this is the flash point. Those troops have been there for months. Many of the troops on the line-of-contact are overt neo-Nazis. Ever since the U.S. and Britain, along with elements of NATO, staged the 2014 coup in Ukraine, a civil war has raged in this region. The Donbass is composed of Russian speakers who have no allegiance to the installed government in Kyiv.

Kyiv’s troops on the line-of-contact are now heavily armed with fresh shipments of missiles and other ordinance from the U.S. and, particularly, Britain. Thus, the Russian “false flag” alleged in the White House’s info op is no false flag –it is a provocation in the Donbass, planned for months by the U.S., Britain, and Kyiv. It is aimed at drawing Russia into Ukraine to defend its citizens and their relatives in the Donbass.

You can be assured that the Russian General Staff has totally planned for the eventuality. They will respond in the most restrained way possible, given that Washington and London have profiled them as committing atrocities and creating a bloodbath. The reports out of Russia today are that the Donbass is being evacuated:  women, children, the elderly, and the vulnerable are being put on buses to Russia.

Former CIA officer Larry Johnson has pointed out that Russia and Belarus announced their forthcoming military maneuvers on Ukraine’s border as early as Dec. 2 of last year. These maneuvers and others within Russia account for the troop presence on the Russian border which the U.S. and the British keep howling about. This was not a sudden deployment or troop buildup. If these maneuvers were to serve as a cover for invasion of Ukraine, then when was the last time that an invader announced a forthcoming invasion in advance in this way?

Military exercises occur throughout this volatile region all the time. NATO, for example, and the British have been conducting exercises throughout this year right up to Russia’s borders. Creating security arrangements concerning these exercises to prevent an accidental war and removing the numerous missiles and arms which have been built up over the recent period is part of what Russia is seeking in a “new security architecture.” Those missiles and armaments create a hair trigger for potential nuclear war by vastly decreasing Russia’s response time.

The Biden Administration’s preparations for its information-warfare operation began still earlier. The Washington Post has reported that the administration began creating a cross-department “Tiger Team” to game out a Russian “invasion” of Ukraine in November. National Security Advisor Jake Sullivan, who played such a large role in the Trump/Russia fake collusion “narrative,” asked Alex Bick, the NSC director for strategic planning, to lead a planning effort across multiple agencies, according to the Post. The Departments of Defense, State, Energy, Treasury and Homeland Security, along with the U.S. Agency for International Development are involved.

The intelligence community is also involved, gaming out various courses of action the Russians might pursue and the risks and advantages of each. They range from a limited assault that captures only a portion of Ukraine to a full-scale invasion that seeks to replace the government of Ukrainian President Volodymyr Zelensky and occupy much or all of the country, according to the leaked Post account.

All these scenarios and narratives, bereft of any present or any intended reality on the ground, have been thrown out to the American people as Putin’s plans for war. All of them have very little to do with what the Russian General Staff and Putin will do if forced to respond to continued provocations.

“`You don’t have to know what they’re going to do’ said an NSC official, who spoke on the condition of anonymity to discuss the administration’s internal process. `You choose a series of plausible scenarios and plan against them, on the assumption that any of them might happen.”

The game being played out here is also embedded in the national defense strategy of the United States, which dates back to the last years of the Obama Administration. It cites Russia and China as “revisionist” powers, “authoritarians” who refuse to collapse themselves into the “rules based” globalist order. The plan concerning Russia is to economically cripple the country through sanctions, a plan made obvious by Republicans who have insisted throughout Washington’s months-long war game and table-top exercise, upon massive sanctions against Russia even if Russia takes no actions concerning Ukraine. Under this fantasy, Russia will not be able to sustain itself economically, which will allow the U.S. to move on to the more difficult problem of confronting China’s emerging economic prowess.

Unaccounted for, again, in Washington’s fantasies is the fact that Russia has been preparing for this economic warfare for months and has all sorts of economic options at its disposal, including the opening of new markets with China and others.

More fundamentally, what has not been accounted for in all of Washington’s scenarios and mind games is the simple fact that Russia was not about to play along and has, in many, respects outmaneuvered Washington. As the days have gone by, Germany, France, and others have realized that the U.S. and Britain are quite crazed and desperate at present and could easily involve them in an uncontrollable war while creating devastating consequences for their economies. They are resisting Washington’s drive to create a permanent state of emergency and a strategy of tensions throughout the world. NATO head Stoltenberg has described this strategy of tensions and manufactured emergencies as “the new normal.”

As opposed to Joe Biden, we don’t claim to know what will happen in Ukraine or how Russia will respond. We do know that it will not be a response that any of Washington’s “tiger team” dimwits played out in their exercises, or any response forecast by Joe Biden.

We do know that the blowback will be primarily economic. If you think inflation is bad now, just take Russian gas, wheat, and massive disruptions in Europe out of the picture. It is our job to ensure that that blowback will not be on Russia but on the fools who precipitated this crisis to save their power. And that will be a reckoning which the American people will make as they cast off those who have so misled and abused them.