Over six months ago, on Christmas Day, the James Webb Space Telescope was launched from French Guiana on an Ariane 5 rocket to its destination one million miles away at the second Lagrange point, L2. After months of unfolding and calibrating the mirrors and instruments on the largest telescope ever deployed, the moment we have been anticipating has finally arrived.

The Webb Space Telescope has now revealed areas of the universe to us in exquisite detail—peering back in search of faint signals from newly forming stars and galaxies. Webb was designed to build upon the groundbreaking discoveries of the Hubble Space Telescope which views our universe in visible and ultraviolet light. Now, as the Webb’s instruments give us insight into the universe in infrared wavelengths—revealing the remarkable processes involved in the creation of galaxies and stars—it is already exceeding our expectations of its potentials. It now becomes possible to explore the full cosmology of the universe—including questions about its evolving and creative nature.

Some of you may recall that back in 2017, President Donald Trump gave one of his most inspiring weekly addresses, renewing our national commitment to NASA’s mission of exploration and discovery. During that speech he declared, “We look to the heavens with wonder and curiosity.” Trump spoke of the remarkable discoveries made by the Hubble Telescope during ten days of Christmas, 1995. Trump declared “Hubble stared into the abyss—seeking whatever light it could glean from the darkness.” He continued, “the entire world was struck by the awesome images our satellite returned. . . In that tiny patch of sky, the Hubble Deep Field showed thousands of lights. Each brilliant spot represented not a single star but an entire galaxy . . . . The discovery was absolutely incredible. But the unforgettable image did not satisfy our deep hunger for knowledge. It increased ever more, and even more, and reminded us how much we do not know about space; frankly how much we do not know about life.”

Now with the remarkable deployment of the Webb Space Telescope, in development for over two decades, we can look back billions of years into the formation of distant galaxies and stars.

Webb’s infrared telescope, with the power to peer through gas and dust clouds and see light which had been emitted billions of years ago, is giving us incredible resolution images of the births of new stars and galaxies. NASA, in collaboration with its international partners, recently released five spectacular images captured by Webb’s instruments. Here are just a few examples of what the massive telescope has revealed so far about the origins of the Universe. The first image, taken by Webb’s Near-Infrared Camera (NIRCam), is a composite made from images at different wavelengths, and is the deepest and sharpest infrared image of the distant universe ever taken—so far.

Webb’s First Deep Field is galaxy cluster SMACS 0723, teeming with thousands of galaxies—including the faintest objects ever observed in the infrared. The image covers a field of view approximately the size of a grain of sand held at arm's length. The combined mass of this galaxy cluster acts as a gravitational lens—a massive object that magnifies or distorts the light coming from objects lying beyond it. You can see the curvature caused by the massive cluster’s powerful gravitational field bending the light rays from more distant galaxies. 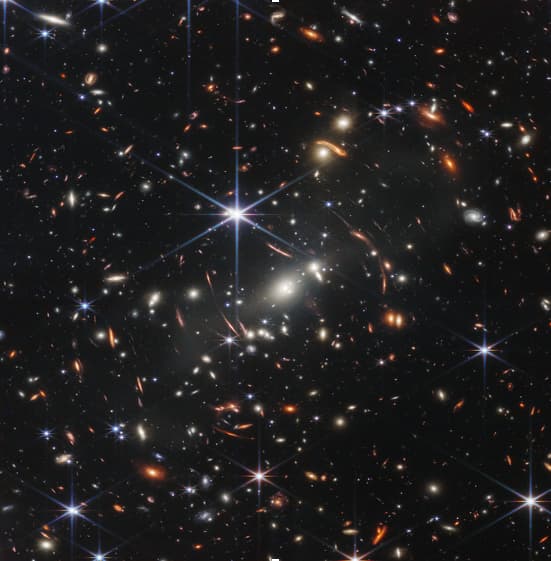 NASA revealed that the image shows the galaxy cluster SMACS 0723 as it appeared 4.6 billion years ago—with many more galaxies in front of and behind the cluster.

Another of the stellar images taken by Webb’s telescope is the Southern Ring Nebula—an expanding cloud of gas surrounding a dying star, approximately 2500 light years from earth. Those images are seen at the top of this post. Webb captured two separate views of the Southern Ring Nebula—in Mid infrared, and Near infrared. The instruments of Webb, unlike previous telescopes, are able to see through dust and other materials, making it possible to view distant galaxies and stars that had been impossible to view before . The image shown through the mid infrared instrument also shows us objects in the vast distances of space behind the nebula, and that all the areas outside are filled with distant galaxies. Webb has also revealed two stars in tight orbit. The stars are very prominent in the image from Webb’s Near Infrared Camera (NIRcam). According to NASA, the brighter star is in an earlier stage of its stellar evolution, and will probably eject its own planetary nebula in the future. In the meantime, the brighter star influences the nebula’s appearance. As the pair continues to orbit one another, they “stir the pot” of gas and dust, causing asymmetrical patterns.

The Webb Space Telescope has also revealed to us the most detailed spectrum of an exoplanet’s atmosphere using Webb’s Near-Infrared Imager and Slitless Spectrograph (NIRISS) WASP 96B. It is 1000 light years away, about the size of Jupiter, and orbiting around a sun-like star. According to the analysis of the spectrum, the signature of water was found in this planet’s atmosphere! 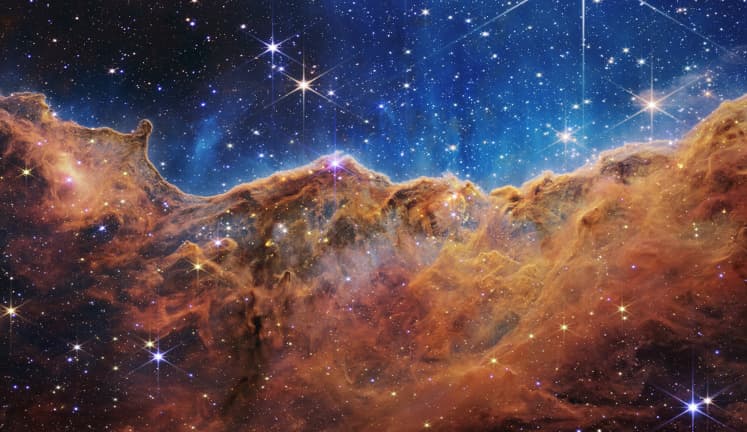 Now some of you were probably as blown away as I was by the wondrous Webb image from the Carina Nebula, or NGC3324. The Carina Nebula is one of the largest and brightest nebulae visible in the night sky—located 7600 light years away. This image revealed, for the first time, previously invisible areas of star birth. The image shows fine details, as the Webb peers through hot ionized gasses and dust. This Nebula, also called a stellar nursery, was formed by giant clouds of dust and gas in space thrown out by the explosion of a massive dying star—a supernova. In this image, as in the others, Webb scientists have highlighted the regions by assigning colors, and choosing filters that enhance the contrast in the details and structures in the image. Scientists assigned shorter wavelengths of infrared light to blue colors and tones, while green and red colors represent longer wavelengths. The colors are combined to bring to you a miraculous image—in a wonderful marriage of art and science.

Although the images of the universe unfolded by Webb are some of the most glorious spectacles ever seen so far, there is something even more remarkable being revealed to the mind’s eye. Our understanding of space and time has fundamentally changed. There are further anomalies being presented which challenge the so-called Big Bang theory of creation. What are the principles governing the ordering of the Universe? These principles are becoming known to the human mind—in opposition to many previous theories about limits to human existence. As we study, through the Webb, the formation of the first stars, will we finally demonstrate that entropy is not the general characteristic of our universe? Might not our observations prove that our universe is actually creative, and bursting with new growth? These are the types of discoveries which bring us great optimism and joy. You can learn more about the fascinating revelations of the Webb Space Telescope here.